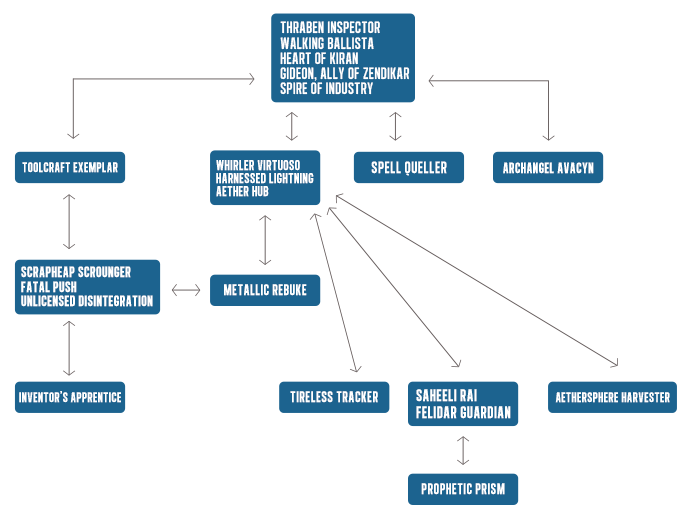 The “Thraben Inspector cluster” is my starting point for a lot of reasons. It and its surrounding spells are, pound for pound, some of the best in Standard. Additionally, they scale well into the later stages of the game, making your topdecks consistently powerful. Spire of Industry isn’t a necessity, but it’s a powerful, unique effect that you get to take advantage of once you have twelve artifacts in your deck.

From there, we could obviously add black for Scrapheap Scrounger and potentially Unlicensed Disintegration. That basically makes us Mardu. While Mardu has splashed for counterspells before, it was when you could play triple one-drop into a counterspell and get significantly far ahead. These days, Mardu doesn’t quite have the cheapest curve, so you won’t be getting much use out of adding Metallic Rebuke to a normal Mardu deck. As I mentioned earlier, you really want to have those double-spell turns, and normal Mardu wouldn’t necessarily be able to do that because of its higher curve.

Whirler Virtuoso is an interesting card, in that I haven’t seen too many people try to pair it with Thraben Inspector. It is one of the best cards in Four-Color Saheeli because it protects their planeswalkers, gives them an energy sink, and attacks opposing planeswalkers well. Making a couple of Thopters to improvise with is a nice upside.

Let’s look at some visual aids.

I legitimately thought Esper Flash could be great for Grand Prix New Jersey. The archetype hasn’t been updated since Walking Ballista and Metallic Rebuke, and both are great additions. In my light testing, I went even with Josh Cho on Mardu in a small set of games. It was helpful, but not a rousing endorsement.

There are a few downsides compared to Mardu. Your top end isn’t nearly as powerful as theirs, so you’re pigeonholed into being the aggressor. The mana is awkward, but I’m not sure if it’s actually worse than Mardu’s. Having Stasis Snare instead of Unlicensed Disintegration is a huge downside also. You could potentially double-splash for it, but I’m not quite sure how to make that happen.

If I could realistically get Fatal Push into the deck, I would. That would require a complete overhaul of the manabase, and one that probably wouldn’t work. Shard manabases are much more difficult to make worse than wedge manabases. Prairie Stream, Port Town, and the like don’t work well in three-color decks. We could potentially take some big leaps with Aether Hub and Spire of Industry, but I couldn’t figure out a way to make that work for Esper.

I also don’t like the fact that the sideboard looks very weak. I’m sure some tuning could be done there, but there was nothing better that I could think of.

While this deck looks super-sweet, I can’t imagine playing without Scrapheap Scrounger is correct. Heart of Kiran looks particularly weak without any way to directly crew it early. I suppose the hope is that you’ll have a random Thopter or Thraben Inspector lying around to help you crew it.

Similarly to Esper Flash, the sideboard is very weak.

The long-overdue marriage of Aether Hub and Spire of Industry is something that would have happened eventually. Ideally I would have both, but it’s not possible. This deck needs white and green early, whereas Aether Hub and Spire of Industry are best at fixing your mana for mid-game splashes. A W/G base where you’re splashing Tamiyo, Field Researcher and Whirler Virtuoso is doable, though.

Tireless Tracker and Whirler Virtuoso are excellent with Metallic Rebuke, and both are great to win midrange fights with. Archangel Avacyn and Gideon, Ally of Zendikar are still the best midrange tools, so why not borrow those from Mardu?

This deck is basically Four-Color Saheeli without the combo, and the big question is whether or not that makes sense. I’m gonna go out on a limb and say no, but that doesn’t mean we shouldn’t try. The real upside to Four-Color Saheeli is threatening the combo while doing midrange things, which forces your opponent to make difficult decisions.

Still, the midrange plan is how you’re winning most of your games, which makes me think it should spawn a deck of its own.

This isn’t the exact configuration that I would play for Four-Color Saheeli, but it is very close to 65 of the same cards.

Heart of Kiran is a card I’ve tried in the archetype. While it’s nice to have a way to pressure planeswalkers (and players), it doesn’t work well with the majority of creatures or Oath of Nissa. It’s doable to make it work, and it helps with Metallic Rebuke, but might not be worth the effort.

Bastardizing the manabase for Archangel Avacyn out of the sideboard might not be worth it, but there are powerful midrange options you can try. After all, the Four-Color Saheeli manabase might be a little too good, so you could probably afford to stretch the manabase a bit further if you wanted to.

Again, it’s likely better to swap the maindeck Metallic Rebukes for Oath of Chandra, given that Mardu is more aggressive in Game 1, but all of this is mostly a thought exercise anyway.

A little bit of Esper, except I’m trying to splash Unlicensed Disintegration. The mana might be really ugly. Using the Wrapter method of playing Aethersphere Harvester to keep your Aether Hubs charged isn’t something I would recommend.

Whirler Virtuoso over Spell Queller seems great in theory, although I’m concerned decks like these will be light on energy overall. How many Thopters will you actually get to make over the course of a game? Ideally something like four, but one or two is probably the norm. Basically, your energy count is incredibly low without playing green.

The lack of Spell Queller likely makes you worse against Four-Color Saheeli, but it’s something I would happily sideboard.

This deck is barely different from the previous version. Instead of playing a bunch of Archangel Avacyns and Gideon, Ally of Zendikars, it focuses on aggression. In theory, it makes way more sense than trying to play midrange with twelve fastlands.

Realistically, though, if the above deck is good, then the below deck should be even better.

Honestly, this is closer to something that I should have played, at least if I’d decided I was going to play Mardu. With everyone on the midrange rat race, going back to beating them down might be the best way to handle things.

Again, the sideboard is rough, but I think this deck has a lot of merit. Instead of playing Gideon, Ally of Zendikar, focus on having the triple one-drop draw. If you have a start as powerful as that, their Walking Ballistas are going to be very embarrassing.

Smuggler’s Copter did a lot of work for this archetype at Pro Tour Kaladesh, but Heart of Kiran might be even better. While filtering through your draws made the deck more consistent as a whole, I think we could live without that if it means killing our opponent quicker.

This sideboard is a work in progress, but with access to four colors, I think we can figure out something that works. Rather than transform ourselves, we can settle on sideboarding in some Metallic Rebukes for their Release the Gremlins.

This started as a Winding Constrictor deck, but the mana looked a lot better once I changed the deck to have black as a splash. It’s a little on the weaker end than some of the white-based midrange decks in this article, but the mana looks good, and the deck might actually be reasonable.

The combination of Tireless Tracker, Whirler Virtuoso, Unlicensed Disintegration, and Metallic Rebuke might be great. That combination should allow you to play a tempo game while still being able to compete in a longer game with their big spells.

My main concern is that this deck is a little light in the meat department. Most of the cards are small-ball, which requires that I stay on equal footing throughout most of the game. If not, I’m probably not coming back. In that regard, it’s very similar to the Esper Flash deck.

Despite all this brewing before GP New Jersey, I ended up playing boring old Mardu. I wanted to win, so I decided to shelve the brews until later, as I certainly didn’t have enough time to figure it all out. While I got crushed and vowed to never play Mardu again, Josh Cho lost playing for Top 8 with the same 75, so it was a good weekend.

In retrospect, I think Mardu was a mistake. My sample size with Mardu was small, and I should have played something along the lines of Four-Color Saheeli. At the end of the day, I just want to play games of Magic, and Mardu served me up a bunch of mulligans and missed land drops. Oath of Nissa is incredible and I should have gone with consistency and familiarity over power. Instead I was at the mercy of Mardu’s awkward draws and diverging gameplans.

Mardu might be objectively more powerful, but Four-Color Saheeli is what I should have played. I knew the deck, knew I had good sideboard plans, and I knew the enemy. With Mardu, I was confident, but not overly so. If I had great draws and crushed a bunch of people, my feelings would probably be different, but I like to think I’m objective enough to see through that. After all, there have been several tournaments where I’d done well but seen enough flaws in the deck to get off it.

Honestly, I might have gotten swept up in the whole “same 75 karma” thing. The idea is that with people like me, Josh Cho, Cedric Phillips, Michael Majors, and Gabe Carleton-Barnes playing the same deck, we’d have a bonding experience playing the same deck, sharing stories and sideboarding plans, all the while rooting for each other. In reality, the Grand Prix was so large, I only saw the non-Cho people once every three rounds or so.

I generally haven’t had issues going against the “team,” so this shouldn’t have been any different. Oh, well. At least I probably know what I’ll be playing at Pro Tour Amonkhet!