Has it really been a year? Apparently it has been. Weird . . .

Let’s rewind to April 2013. It’s round 2 of the SCG Invitational in Atlanta, and I’m on my break while Osyp Lebedowicz and Tom Martell are doing coverage together for the very first time. Unsupervised. Now, it’s not that Osyp and Tom can’t behave themselves, because they certainly can. It’s just that I’ve seen when they don’t behave themselves.

It’s as hilarious as you think it is. Trust me.

So when I received a phone call from Evan Erwin ten minutes into the round, I expected to hear the worst:

“Martell just called someone an idiot. And how did he sneak Finkel’s scarf into the booth?”

Instead, it was something completely different:

“Uh . . . sure I guess? I don’t even know what that means. Can you send me a job description?” I said. As soon as I received the details, I remember going directly to Glenn Jones and asking what the heck this list of responsibilities meant.

“That job is pretty effin’ hard man. I hope you’re ready to have no free time.”

“Well, I’m not really doing anything now besides Inside Information, watching basketball, and broadcasting shows. How time consuming could it be?”

The past 365 days have been the busiest of my entire life. I went from being an out of work slob who had no direction to someone who wakes up at 7:00 AM every morning and has almost every hour of the day accounted for a week in advance.

All because I accepted a job? I don’t really look at it like that.

I think of it more like I accepted a responsibility. You see, I’m very critical of myself, my peers, and the powers that be in Renton, Washington. I want the best for Magic so badly that it’s borderline unhealthy. Do I come off as an asshole in my complaints at times? Absolutely.

So when I was given the opportunity to control all of the content that is placed on this website as well as have a direct impact on the direction of the SCG Open Series, I took it pretty seriously because not everyone is given that sort of opportunity in life.

And if I failed? Well, failure just isn’t an option.

So as I sat at home in Cleveland earlier this week with my parents for the first time in seven months, I took some time to reflect on the past year. It’s fun to see what I got right (The Industry Standard and Leaving A Legacy seem to be columns that people enjoy writing and reading), what I missed the mark on (Guess Who?! was an epic failure), and all the places I’ve been (over 30 cities and who knows how many cross-country flights).

But more importantly, it’s about doing right by you guys and gals. I’ve been on the other side of things before. I’ve been the person who came to the website at 12:01 AM to see what new content was published and been disappointed. I never liked how that felt, and you shouldn’t either.

It’s always been my goal to have the best content available on a daily basis for you to consume while also having it be diverse enough that everyone finds something that they like. That can obviously be difficult, but I think I’ve finally gotten it to a point where I’m pleased. I hope you will be too.

Our Premium roster is finally solidified, and I couldn’t be happier with who we have on board:

Now, it would be easy to quickly gloss over our Select lineup because it’s pretty hard for it to compare to those fine gentlemen, but it’s important for those who don’t have Premium to be taken care of as well, amirite? I think we’re doing pretty well there too:

And that doesn’t even talk about our Commander friends:

I know what you’re thinking. You forgot Ravitz, Lowry, Kotter, Moore, Ullman, Beety, Jones, Nestico, Higgs, Shrout, Bleiweiss, Davis, and McDarby + DWest. Nah. I just didn’t have any witty one liners for them.

Wait. I set the deadlines.

If I miss the deadline that I set, do I punish myself?

All right, fine. I’ll only watch two episodes of House of Cards tonight instead of three.

Oh, right. I almost forgot Evan. It would be pretty stupid to forget your boss, right?

Well, what you may not know is that the boss has a new project. And if you haven’t watched Forgotten Lore yet, I recommend that you do because it’s pretty incredible stuff. You can check out his newest episode that goes over the history of Worldwake (stupid Jace, the Mind Sculptor) and support his newest endeavor here.

And before you ask, no! The Magic Show ain’t going nowhere.

And last but certainly not least is this guy: 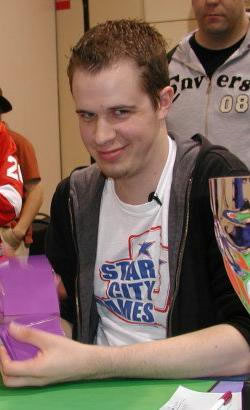 The SCG Open Series just got a little bit more difficult. You can find out why he’s back on my podcast if you’d like. Or ask him yourself. He’s got an article on the Premium side today ya know!

It’s crazy to think that Pete and Evan have tolerated me for a year. My friends can’t deal with me for more than a few hours. So I guess I’ll continue to wear out my welcome for a little while longer.

I hope you don’t mind.