With Ryan Saxe out for a few weeks with real life commitments (I know,
right?) and given the fact that I’ve been drafting a lot of Core Set 2019 in my down time, I decided why not fill in for our
resident Limited master for a few weeks? So come along for a ride as I

draft Magic’s newest set to the best of my ability.

If it wasn’t obvious, I think green is the best color in Core Set 2019 and by a pretty sizeable margin. The color has the
biggest creatures, the format doesn’t have a ton of removal, and the
removal the format does have isn’t that hard to shrug off. Examples of this
include:

With those factors in mind, I need to be given a pretty good reason not to
be drafting green. Opening Prodigious Growth and Declare Dominance
certainly isn’t going to turn me away from what I prefer, so now it’s just
a decision between the two awesome green cards. For me, Prodigious Growth
has some risk associated with it because it’s an aura so the opponent is
given the opportunity to two-for-one you, but ignoring something like
Disperse or a well-timed Electrify, it really doesn’t happen that much.
Yes, your creature can get hit by Take Vengeance or Luminous Bonds after
the fact, but, again, that means you likely got some good work done with
the one shot you got to take.

And if they don’t have an answer? You’ve likely won that game in pretty
quick fashion.

Declare Dominance is no slouch, and I like how Ravenous Harpy interacts
with the other black cards in Core Set 2019 (Reassembling
Skeleton, Doomed Dissenter, etc) but gimme the green rare and let’s get
this show on the road.

I’m a pretty big hater of white in this format. Between the crappy removal
at common (Take Vengeance and Lumionous Bonds) and mediocre creatures (I
don’t even like Pegasus Courser in this format as much as I did in Dominaria), white just leaves me left wanting more. Regal
Bloodlord is a card I would draft white for, but I’m not willing to take
that when I can take the perfectly playable Giant Spider to sure up my air
defense, something green is notoriously weak at, though it does have access
to Plummet in Core Set 2019, while also keeping my Prodigious
Growth at the top of my mind.

G/U is a color combination that has really been good to me early on in the
format. Between good two- drops at common (Druid of the Cowl and
Omenspeaker), good card drawing at common (Rhox Oracle and Divination), and
good pieces of interaction at common (Rabid Bite, Essence Scatter, and
Disperse), the color combination appears to be a good one. Aether Tunnel is
a unique effect and great racing tool in the color combination that comes
with the same risk that Prodigious Growth does but clearly without as much
upside. I like the card but I don’t love it enough to move away from
Thronhide Wolves, a card that has great stats (five toughness is ideal) and
is easy to cast (only one green in the mana cost).

As for Lich’s Caress, it’s the best common removal spell in the format, and
I’m not thrilled to pass it, but I haven’t been thrilled with G/B as a
color combination thus far. I wouldn’t fault anyone for taking Lich’s
Caress here, but I really like forcing green when I can and Thornhide
Wolves, a card that is normally just filler in its Draft formats, actually
shines quite a bit in Core Set 2019.

How all-in am I on green? Quite a bit, but truthfully, there isn’t an
exciting option past Titanic Growth. Skilled Animator is great in the right
deck, but G/U isn’t it and Snapping Drake is… Snapping Drake? A 3/2 flier
for 3U just doesn’t do anything to get me excited.

Titanic Growth is a perfectly acceptable card in Core Set 2019,
and it’s important to remember that there aren’t many pump spells in Core Set 2019 so the ones that you do get are fairly valuable.

I’ve finally been given a reason to pick a card of a different color!
Seeing this Skymarch Bloodletter kinda makes me wish I took Lich’s Caress a
few picks earlier, but I really do like Thornwood Wolves a lot and when I’m
sure of my pick orders, I tend not to stray.

Skymarch Bloodletter is a card that is worth dipping my toe into another
color for, especially when it’s in such a weak pack. It is worth nothing,
however, that Plummet is very maindeckable in this format and any time that
I’m drafting green, I want at least one in my sideboard.

As for Aven Wind Mage, it’s a totally fine card but is worse than Skymarch
Bloodletter in almost every way (even though I really like G/U) and is an
easy pass here.

So how did I end up? Check it out: 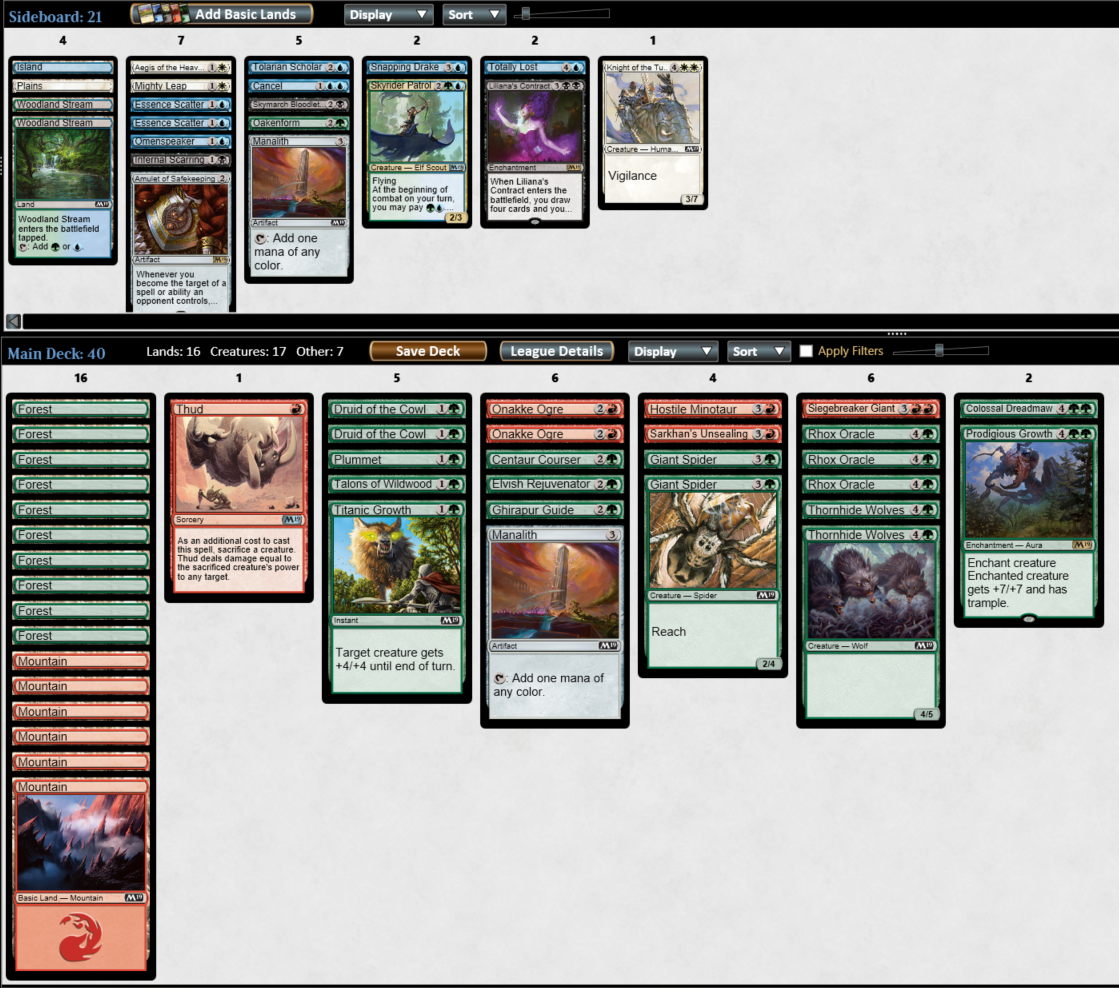 My deck really came together nicely in Pack 3, as I got a very late
Sarkhan’s Unsealing, one of the best rares in the set if you have the deck
to go along with it. Fortunately I did, and a lot of my draws ended up
being Druid of the Cowl, Sarkhan’s Unsealing, kill your next two creatures,
and get yelled at by my opponent.


Figuring out where to go in the early stages of a draft is always
interesting and as I do these over the next few weeks, I’m sure I’ll run
into some tougher decisions; but for now, keep the green cards coming
because I don’t mind playing on easy mode on my way to a 3-0!