Innistrad: Crimson Vow Prerelease was last weekend. Did y’all get anything sweet in your Prerelease packs?  I unfortunately didn’t have the opportunity to go snag any myself, but I’m super-excited that this very weekend the set is officially released and ready to purchase!

I’ve got a pretty hefty pre-order in from StarCityGames.com that I can’t wait to get my hands on, but in the meantime, I’m going down to my local game store to pick up a box of set boosters to crack, along with snagging a sweet Buy-a-Box promo Voldaren Estate as Castle Dracula!

I’m a huge fan of Bram Stoker’s Dracula – both the novel and the excellent movie by Francis Ford Coppola – and I’m hoping I can pick up Dracula versions of the main characters: Mina Harker, Abraham Van Helsing, Quincey Harker, Dr. John Seward, Lucy Westenra, Jonathan Harker, and one of the versions of Dracula, preferably Dracula the Voyager because the backside Casket of Native Earth is so cool!

Speaking of double-sided cards that look cool, I’ve been inspired to build a Commander deck around Runo Stromkirk in large part because I love the backside artwork so much! 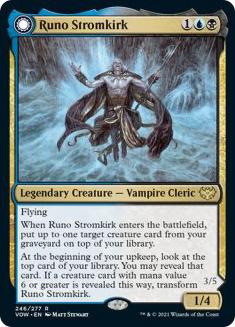 As a longtime fan of the horror genre, I’ve always enjoyed the maddening monsters of the Cthulhu mythos from H.P. Lovecraft’s writings, and Runo’s transformed side Krothuss, Lord of the Deep evokes that creepy vibe perfectly!  The problem I have, though, is I can’t decide which artwork I like most. 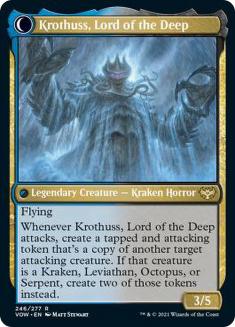 Matt Stewart’s art is terrifying, as the Kraken Horror looms large rising out of the ocean deep.  It’s obviously huge, and yet somehow, you’ve captured its attention, yikes!

Xiaobotong’s version looks even larger, with its massive taloned claw reaching down for what looks like a hapless ship doomed to a nasty fate in the churning sea.

Then there’s Nico Delort’s version, delightfully rendered in otherworldly creepy black and white.  This version looks like Krothuss is stepping in from another dimension, shredding the barrier between realities as easy as it shreds your own sanity.

What’s a horror fan to do?  Me, I took the easy way out—I preordered all three and intend to use whichever side feels right that day… or maybe I’ll use all three, depending on how the game goes!

Krothuss has an awesome attack trigger that lets you make a copy of another attacking creature, and if that creature is a Kraken, Leviathan, Octopus or Serpent you create two of those tokens instead.  We’ll want to keep an eye out for creatures that have nice enters-the-battlefield triggers to copy with Krothuss.

I really love this because it really encourages a creature-heavy deck rather than the typical control direction so many other Dimir decks tend to be, and yet you still have access to some interaction and counterspells to protect your battlefield at clutch moments.

The first things I want to look for are large creatures that cycle from my hand, so I can easily dump them into the graveyard for Runo to then put on top of my library.  I particularly like River Serpent and Striped Riverwinder because they are Serpents, so if either one ends up on the battlefield and attacking alongside Krothuss, I’ll get to make two copies.

When looking for large creatures with cycling, I ran across Scion of Darkness.  The cycling cost is a little expensive, but I’d consider it anyway since it’s got a strong battlefield presence and it’s not legendary, so it makes a great copy target.  It might even be worth adding Dark Supplicant and some number of Clerics!

Putting Creatures into Your Graveyard

Outside of cycling, Dimir has a lot of other great ways to get one of those creatures directly into the graveyard. Entomb is the old-school gold standard here, but there a lot of other cards that do the same sort of thing for added redundancy. Search for Azcanta and Forbidden Alchemy are ways to perhaps find a viable target from the top of your library and put it in the graveyard for Runo’s enters-the-battlefield trigger. Outside of just prepping for Runo, I’d consider maybe a touch of reanimation here too, such as Victimize and Ever After.

Putting Creatures on Top of Your Library

Another option for triggering Runo is just to have a creature with mana value six or higher on top of my library, so to that end there are a bunch of great cards that can facilitate that. Brainstorm and Scroll Rack can instantly take a high-value creature that’s in your hand and put it on top of your library, and Lim-Dûl’s Vault can dig deep into your deck to find the perfect one. Or you can go with a more surgical strike with Vampiric Tutor or Varragoth, Bloodsky Sire’s boast trigger.

I know the biggest thing about Golgari Thug is its dredge ability, but let’s not forget its triggered ability of putting a creature on top of your library!

Okay, so what creatures with mana value six or greater should we include?  There are a lot of choices and I’m highlighting a bunch of them here.  Burning-Rune Demon and Sphinx of Uthuun can generate some nice raw card advantage, and so does Consecrated Sphinx if it lives long enough. And making copies of a Grave Titan with Krothuss is just good clean Magic.

Other Creatures with Enters-the-Battlefield Abilities

We should also include cheaper creatures that we can cast to the battlefield earlier in the game that are worth copying with Krothuss, and there are some home-run inclusions like Solemn Simulacrum, Baleful Strike, and Mulldrifter. Ravenous Chupacabra, Amphin Mutineer, and Cavalier of Night can further decimate problematic creatures as you copy them. Peregrine Drake is a deep cut, letting you squeeze extra mana from your land base with a copy.  Fell Stinger is one of my favorite new cards from Innistrad: Crimson Vow and I expect it to do amazing work in this deck!

So, what about good sea creatures that Krothuss can copy twice?  I went looking for some good ones to include and found a fair number of them!  Serpent of Yawning Depths is a slam-dunk addition here, making Krothuss and other sea monsters mostly unblockable.

Icebreaker Kraken is a fantastic inclusion if you’ve got enough snow lands to shave off a bunch of its mana value and can really dominate the battlefield if some of your opponents’ best creatures happen to be tapped down.

While Stormsurge Kraken is regretfully less than six mana, it’s a wonderful card to attack alongside Krothuss and get copied twice, either punching in for a ton of damage or getting blocked and letting you draw a bunch of cards.

Hullbreaker Horror and Rot-Tide Gargantua are two horrific new Kraken cards from Innistrad: Crimson Vow that are perfect additions to the deck.

Speaking of Krakens, Leviathans, Octopuses, and Serpents, a few other cards care about that particular mix of creatures that we should include, like Whelming Wave and Quest for Ula’s Temple. Maskwood Nexus continues to impress and does huge work here, letting Krothuss copy any creature twice since all your creatures pick up all the relevant types, not to mention generating some random token creatures you can feed to other effects, such as exploit.

It occurs to me that it would be cast to play a big monster and get to attack with it immediately alongside Krothuss, so I’d like to include ways to do just that.  My favorite is Crashing Drawbridge, since it doesn’t cost any mana to give all your creatures haste, but if you have enough mana, Akroma’s Memorial adds a whole bunch of other abilities to your team as well.  Swiftfoot Boots is a Commander mainstay for its hexproof ability in addition to the haste, but I’d also consider Haunted Cloak since it has a cheap equip cost to grant haste alongside vigilance and trample.

Lastly, I’d like to add ways to give creatures the flash ability.  As cool as Runo is, there are a lot of hoops to jump through, and normal play gives opponents lots of time to screw up your plans while you wait for each opponent’s turn to go by before your upkeep.  Maybe someone mills you the card you put on top of your library with Runo, or someone makes you shuffle your library. Or even worse, Runo gets destroyed by a battlefield sweeper.

What would be ideal is to cast Runo on your last opponent’s end step, right?  Luckily for us, we’re a Dimir deck and we have a fair number of ways to give your creatures flash, such as Leyline of Anticipation and Teferi, Mage of Zhalfir.  I’ve been searching for a good home for Tidal Barracuda, and this might be a great place for it. Even though it’s a little hair-raising that all your opponents get to take advantage of the flash ability on everyone else’s turn, it could be worth having your own turn peaceful and free of stress and interaction, no?  And hey, while it’s not one of the big sea monsters, it is a Fish, so it’s right at home here.

So, what do you think of Runo Stromkirk? Is there anything you would play with it that I didn’t mention above?