If you’re a deck brewer, Kaldheim has you pretty excited.  There are any number of ways to go, from mono-color all the way up to five-color.  With DFCs, you even have the opportunity to bring noncreatures out of the command zone.  I’ll take advantage of that opportunity in one of the two builds I’ll present today. 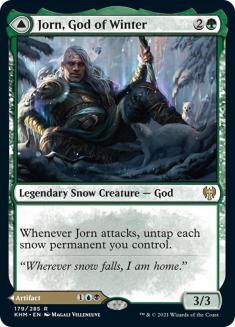 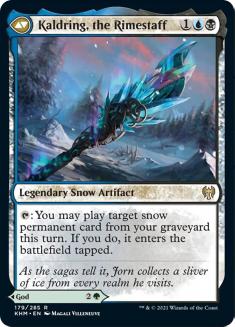 As soon as I saw Jorn and his back face, Kaldring, the Rimestaff, I knew this was the first thing I wanted to put together.  I’m a sucker for Sultai anyway, and the combination of abilities got my motor running.  Initially, I was even looking for a way to cast Kaldring, copy it (with something like Copy Artifact), have it go away due to the legend rule, and then just cast Jorn so that I could have both of them on the battlefield at the same time.  I abandoned the plan as a little too cute, but the idea of copying stuff stayed with me.

I then remembered that the Rogue theme was strong in Zendikar Rising, and I had a direction since some of those Rogues copy things.  I put two other restrictions on the build.  First, I wanted as many Kaldheim and recent-set cards as was reasonable.  We’ve gotten an accelerated amount of product in the last year or so, and I feel like I haven’t had as much time to luxuriate in them as I’d like.

Second, I wanted to include cards from by Build Box. My collection is relatively well-organized, by set.  There are binders for everything from Revised up through Zendikar.  Then from Zendikar forward — when my Christmas present every year from fellow RC member Scott Larabee started being a set of foils from all normal releases — I have boxes organized on a shelf.

The Build Box is full of cards that I’ve been too lazy to file back into those boxes.  They’re good cards that I know I’ll stick back into a deck eventually, so I separate them, and that’s the first place I look when I want to brew.  No sense acquiring too many cards when you’ve got them lying around.  Building out of the box also prevents me from going in the direction of too many staples.  On this list, Verdant Catacombs is an example of a card from the Build Box.  There it was, just staring me in the face, and suddenly I had a deck for it.  Grim Feast is another such card.  Once you cast it, you’ll see what’s one of the best Hidden Gems around.

With the aforementioned ideas in mind, I set to putting together Jorn and his Snow Rogues.  Here’s the list:

You’ll like this deck if you like to work to get the best value out of your cards.  I frequently say that I’d rather win the game with my brain than with my cards, and this is that kind of deck.  Especially because of the copy effects, we’ll need to make judicious choices on what’s the best thing to copy for the current game state.

If Rogue tribal is your thing, you’ll also like it.  The Zendikar Rising Rogues have some cool synergy, especially with Anowon, the Ruin Thief.  The idea isn’t to mill to get things to reanimate out of others’ graveyards — I do enough of that in other decks.  It’s all about dealing some damage and drawing some cards.  Anowon offers you an incentive to spread around the damage so that you can potentially draw more cards.

There are some old-school Rogues in here was well, like Cold-Eyed Selkie; Sygg, River Cutthroat; and Thada Adel, Acquisitor, who for some reason I always thought was a Wizard, despite Rogue making more sense.  I was happy she came up in the search. She’s a little awkward for webcam play, but that’s why we have Infinitokens.  Honestly, most of the time it’s “just give me your Sol Ring.”  Nezumi Graverobber was an early format staple in the 2004-2007 or so era and it’s another one I didn’t know was a Rogue until I was searching for cards that fit the theme.  It plays well with the milling or just any other graveyard strategies other people might have.

If you’re down with snow permanents, this deck will interest you as well.  Jorn’s ability is obviously meant to leverage them, but if it just manages to untap lands, that’s fine with me.  Giving my attacking creatures pseudo-vigilance is just fine.

If you want combos in your deck, this one won’t scratch that itch.  There are plenty of synergies but there’s nothing that you can just plop onto the table and be guaranteed to win with.

The deck is mid-power at best and not particularly fast, so if you want to win on early turns, you’ll also have to look elsewhere.

The deck battles with Rogues and snow creatures.  Lots of the snow creatures are from Kaldheim, but there’s an old-school choice or two, like Ohran Viper and Blizzard Specter.  It untaps many of the creatures and Jorn, getting double use out of them.

It can get going early with some mana creatures like Boreal Druid and Rime Tender, plus the ramp of Into the North, Farseek, Cultivate, and Kodama’s Reach.

I added Arcane Adaptation to turn all the creatures into Rogues, thereby getting even more value out of the Rogue-specific cards like Anowon.

What It Doesn’t Do

The deck doesn’t have too many control elements.  Its design leans toward my “local” playgroup — being the rest of the RC on webcam games — that frequent sweepers aren’t usually a thing.  As it turns out, I’m often the most control-oriented player in the group (save when Toby plays his Heliod, God of the Sun deck with like eighteen Wrath effects).  I want to step away from that occasionally; this deck’s control might come from its copy abilities.

Even with the ramp elements, the deck doesn’t have an explosive early-game.  That ramp might lead to casting an additional spell on early or mid turns, but nothing that’s likely to set the pace of play.  This is definitely a philosophy of second best deck, flying a little under the radar and letting someone else take the lead as well as being the target of the big hit.

How Does It Lose?

Without too much early pressure, the deck might get outclassed by faster decks, which is why I’ll play it in lower-powered environments. 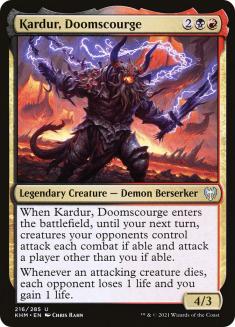 I wanted to build a second deck out of a commander that I thought wouldn’t get much play but could create compelling game states.  Kardur seemed like the right choice.  It involves fewer Kaldheim cards than I’d like, but there aren’t that many of them that play into the game state I want to create.

This is absolutely an outside-the-box deck.  It will create an environment in which there is lots of combat action, most of it ideally directed at your opponents. It will feature big, swingy plays from other players while you cackle from the sidelines.

If you like being an instigator, this is the deck for you.  It features a sufficient number of goad effects and some which force all creatures to attack each turn, keeping players from just sitting on their armies.  An old card that helps with this is Angel’s Trumpet — sure, you’re giving all your opponents’ creatures vigilance, but it leaves them vulnerable if they don’t get into the battle, as well as dealing damage to them.

If you enjoy killing people because they have lots of creatures, you’ll have a good time here.  Repercussion plus big combats will make people dead.  So will adding a Blasphemous Act or Star of Extinction.

If you like to be in complete control, this is not the deck for you.  There are times when things aren’t going to go the way you want.  In fact, there might be times when people attack you because you’re making them attack.  There are a few things that give them incentives not to, but clever players will know that the deck doesn’t have white, so it’s not going to have as many You Did This to Yourself elements.

In short, the deck makes other people do your dirty work.  The big goad is Kardur himself, forcing everyone to attack someone other than you.  Then, when there’s the inevitable creature death in combat, there’s more life loss.

There are a few instants, like Starstorm and Volcanic Fallout, that are meant to take advantage of Kardur’s ability to drain life from people.  The obvious time to cast them is when someone attacks you, but don’t sleep on the idea that even during end of combat, those creatures are still attacking.  Dealing an extra two with Volcanic Fallout might clean off even more of the battlefield for you.

The big, aggressive kill is Repercussion or Toralf, God of Fury and a damage dealer like Blasphemous Act.  Or both of them for even more overkill.

It has a few more tricks, like becoming the monarch and then keeping the crown due to Kardur.  Honestly, I’m thinking about tossing him into my Queen Marchesa deck as a member of the 99.

What It Doesn’t Do

The deck doesn’t control much of the environment besides where creatures get pointed and in sometimes killing them.  Otherwise, there aren’t too many battlefield control elements to speak of, meaning you’ll want to somehow encourage other players to take care of problematic artifacts and enchantments.  Of course, player removal is a pretty good option.

The deck doesn’t have a particularly strong creature attack plan of its own.  There are a few scenarios, like if you’ve gotten some creatures off Kazuul, Tyrant of the Cliffs, but for the most part, the attacking is left to other players.

How Does It Lose?

The enchantments are reasonably important, so repeated enchantment hate like Aura Shards is probably going to make you dyspeptic.  You’ll get similarly queasy if someone continuously kills all the creatures so that you can’t have them attack other players.

Occasionally, you’ll lose to the attacks that you forced on people. It’s living on the edge, but that’s what makes it thrilling.  Since there’s a small amount of interaction, the deck will certainly not fare well against combo decks of any kind.  I certainly wouldn’t choose to play it in that kind of environment.

Looking Towards the Future

These are just two of the numerous possibilities that Kaldheim is offering up.  I’m looking forward to creating something out of it for the new RC project called “Snow Battles,” in which we do Kaldheim-Coldsnap-Ice Age Constructed (with a few other snow cards added).  More details on that in the coming weeks.