Welcome to What We’d Play! With the recent introduction of Zendikar Rising, many are unsure what they’d play in Modern. That’s where we come in and let you know what we’d play and why we’d play it. Hopefully this advice aids in your decision making for your next Modern event! Be sure to vote for what deck you would play at the end!

I’ve been a long proponent of Mill in Modern, largely of the opinion that it was one or two cards away from being a real contender in the format.  Wouldn’t you know it, Zendikar Rising gave the deck another virtual Goblin Guide. 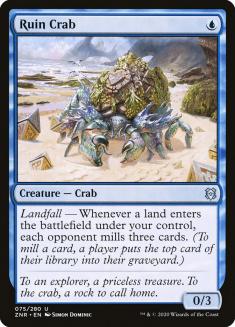 The way that mill decks actually play is much closer to a blue Burn deck, rather than a card-drawing control deck that most people tend to associate it with.  When framed this way, it’s easy to see just how big a deal Ruin Crab is for the archetype, and why it didn’t take somebody very long to be successful with it.

Racing Burn decks isn’t as tall an order as one would assume when it’s easy to check the creatures with removal, and Crypt Incursion is nearly lights out against a ton of archetypes.  Don’t even get me started on Archive Trap KO’ing bullets out of Amulet Titan decks from the stratosphere.

Most of my point boils down to this: when compared against the rate of more traditional spells, the tools that Mill has available to it stack up beautifully.  Having the disruptive tools that Dimir affords the archetype also allows it to hang in ways that more traditional Burn decks can’t.

Burning people out while they’re still figuring out how to beat the deck is a great place to be.

I’m on the Omnath, Locus of Creation train until something fundamentally changes.  It is not unbeatable in Modern; however, it is one of the strongest additions to make midrange decks viable once again.  Although no one is sleeving Jund up in the competitive world anytime soon, this Four-Color Ramp decks represents the best elements of the card advantage, disruption, and flashy win conditions that the format has to offer.

Field of the Dead is not legal in many formats, but it is making splashes where it’s allowed.  Hour of Promise; Uro, Titan of Nature’s Wrath; and Growth Spiral provide the ramp necessary to take full advantage of the land suite you see in this list.  Omnath automatically makes this a top-tier strategy, adding card advantage, mana advantage, and removal for a criminally low cost.

To make this deck even more appealing, there are a ton of counterspells in the maindeck, giving it the control disruption feel, while producing a mountain of pressure from Field of the Dead.  I’m not sure Omnath is going anywhere in the older formats, but I am certain it has spawned another powerful archetype.

I figured that the modal double-faced cards (DFCs) would allow us to stretch the limits of deckbuilding, and it didn’t take long for someone to find out how. Recross the Paths in a deck with no lands essentially stacks your deck, allowing you to leave whatever you need on the top to set up a Goblin Charbelcher kill, whether it be the namesake card itself, a Veil of Summer to protect against counterspells, or Reforge the Soul into multiple pieces.

Of course, with all the fast mana, this deck is capable of early Charbelcher kills with a good draw, which the London Mulligan helps you find, and all the modal DFCs are functional in the deck save for Turntimber Symbiosis. Spikefield Hazard can take out pesky Thalia, Guardian of Thrabens; Tangled Florahedron provides acceleration; and Valakut Awakening and Bala Ged Recovery let you reload in the face of disruption.

The combination is a deck that is capable of goldfishing matchups that don’t have disruption without folding to Force of Negation or Thoughtseize decks. Problematic hate cards like Pithing Needle can be answered by the Collected Company kill in the sideboard, which you set up with Recross the Paths. Beyond that you simply sub out your Veils for better disruption in a given matchup, whether it’s Pyroclasm against creatures, Leyline of Sanctity against Burn or discard, and Blood Moon against big-mana strategies. I expect players to adapt to this deck, but I want to take advantage of whatever window remains for this deck to rack up easy wins.

I’m still on Humans for another week. If people are playing more stupid things like Mill or Primeval Titan, I just want to Meddling Mage and Thalia, Guardian of Thraben them back to 2018.

Unshockingly, Kanister made some great upgrades to the deck on the way to winning the Modern Challenge a couple of weeks back. Phantasmal Image has been a mainstay of the deck for basically forever, but is that really the card you want against Lava Dart? On the other hand, Unsettled Mariner is kinda medium, but again isn’t that the card you just want against Lava Dart?

I’m also really into the large amounts of Relic of Progenitus, a card I honestly think should be seeing maindeck play. The only old sideboard card I miss is Plague Engineer, but as long as the other Humans players agree to not play it we can all get those sideboard slots back.

Maybe I’ll get back on the Uro train again soon, but for now I just want to jam the classics.

For Zendikar Rising‘s debut in Modern, I couldn’t resist pushing Omnath as far as possible (as I cover this week, there are many ways of doing that).

My early results with this reboot of Five-Colour Niv-Mizzet have been promising. The deck was an unintended casualty of the Arcum’s Astrolabe ban but regained a functional manabase with the Ikoria Triomes and makes excellent use of Omnath — a threat that can chain into your five-colour five-drops for ‘free’ with a fetchland without being another five-drop clogging your hand and a good complement to all the other lifegain in the deck in faster matchups.

I’m unsure on the right toolbox for Glittering Wish or if it belongs in the deck at all but it can find cards that address problems that you can’t brute-force with your unrivaled mid-game card advantage — Turn 2 Wish for Turn 3 Ashiok, Dream Render or Deafening Clarion (or whatever the silver bullet is) is a fine plan by itself.

A few weeks ago, I was playing nothing but Prowess in Modern, but times have changed. Zendikar Rising is now legal in Modern, and modal DFCs are causing a resurgence in non-interactive combo decks. Amulet Titan is on the rise, as is the new Belcher deck. Both decks are unfavorable matchups for Prowess, but favorable matchups for Humans. A single Meddling Mage can cause either problems, and if it is backed up by a Phantasmal Image or even just a clock, it can easily be game over. At the same time, between General Kudro of Drannith and Reflector Mage, this deck has the tools to answer the omnipresent threat of Uro, Titan of Nature’s Wrath.

The specifics of my list come from two disparate sources: Kanister’s Modern Challenge-winning list (which Ari liked above) and the one Eli Loveman and Ari Zax (who is not Ari Lax) have been promoting on Twitter. Relic of Progentius serves to be strong against Uro decks and generally hose Dredge. Chalice of the Void gives the deck a powerful hate card for Prowess and Death’s Shadow alike, but, unlike Auriok Champion, it cannot be answered by Bonecrusher Giant. The artifact is typically set to one, and Humans can easily deploy its own one-drops through it with Aether Vial and Cavern of Souls. Damping Sphere serves as a hoser for the bouncelands of Amulet Titan while randomly hosing a few other less popular combo decks.

You might notice that my sideboard is mostly dedicated hate cards, rather than broad answers. I think this is appropriate because most of your maindeck cards are totally fine across the board right now. As a result, you can afford to play the best valuable answers to whatever strategies remain problematic.

I’m excited to work on this new archetype and get a bunch of free wins in the process. I wrote about the new Goblin Charbelcher archetype this week and my hypothesis hasn’t changed. The combination of hate permanents in Chalice of the Void and Blood Moon and a one-card win condition has finally brought the Prison archetype to the point where I can consider playing it.

You have many free wins across the metagame lineup, with Chalice making it very hard for Mono-Red, Rakdos, or Izzet Prowess decks to win, and Blood Moon doing the same to Amulet Titan decks. You can run out these cards a turn early thanks to Simian Spirit Guide and you’re always live to topdeck the win thanks to Recross the Paths and Goblin Charbelcher.

With Valakut Awakening and Bala Ged Recovery, you have an easy time churning through your deck and fighting discard-based disruption, and it’s all part of your manabase! The innovation of modal DFCs that are lands but not land cards has made this archetype surprisingly consistent and powerful.

It’s not my usual cup of tea, but I am (for the first time ever) excited about playing a blend of two of my least-favorite archetypes: Prison, and All-In Combo. What an age we live in!