Commander Legends has an eye-popping 32 brand new multi-color legendary creatures we can build new Commander decks around, and I’m going to dive into a lot of them here every Saturday for the foreseeable future. Bookmark my Starcitygames.com archives right here and check back often!  I’ve covered a bunch of them already. 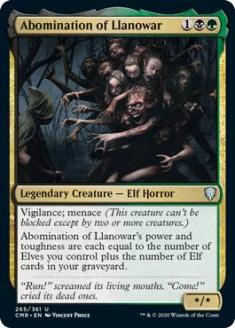 There’s a lot of cool stuff going on with this card. First off, since it’s Golgari you get to bring together all the great Elf tribal stuff in both green and black.  Next, Elves are great at going wide: putting a lot of small Elf bodies on the battlefield, but that makes them vulnerable to large creatures that would run right over them or a battlefield sweeper that would dump them all into the graveyard.  Abomination of Llanowar lets you go tall while you also go wide, regardless as to whether your other Elves are on the battlefield or in the graveyard.  Vigilance and menace mean that it can be both aggressive and defensive, freeing up your smaller, fragile elves for mana production and other shenanigans. And for the low, low mana cost of three, it’s easy to cast multiple times during the game.

Let’s brew up something sweet! 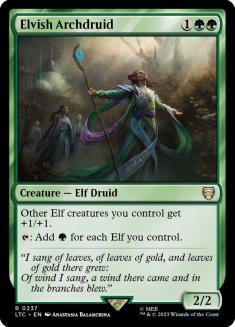 We’re definitely an Elf tribal deck, and the best Elf tribal card is Elvish Archdruid.  This has the mana power of Priest of Titania stapled onto a slightly bigger body that also boosts all your Elf creatures +1/+1.

I’m including a lot of the other usual Elf tribal suspects:

Ezuri, Renegade Leader has always been the lynchpin of old-fashioned Elf ball decks—make a bunch of mana, then attack with a bunch of small Elf creatures that suddenly get +3/+3 and gain trample until the end of the turn. The regenerate clause is particularly useful here since you have a very good target for it—Abomination of Llanowar doesn’t like dying if it can help it.  Come to think about it, Abomination of Llanowar likes the trample ability too!  Dwynen, Gilt-Leaf Daen and Rhys the Exiled give you some lifegain, while Shaman of the Pack lets you drain life from an opponent.

Then there are the high-quality artifacts you put in just about any tribal deck: Stoneforge Masterwork, Heirloom Blade, and Vanquisher’s Banner. And I like Kindred Summons here as an instant-speed way to double your Elf creatures, which plays especially well with all the Elf tokens that can be generated along the way. Untap, have a big turn with your Elf army, and if someone casts a battlefield sweeper and kills them all, they’ll just make Abomination of Llanowar that much bigger the next time you cast it. 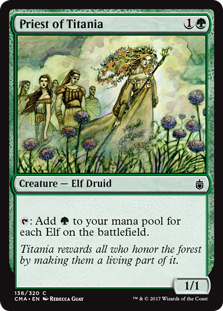 While Elvish Archdruid may hold down the #1 spot, the OG Elf ball mana producer is Priest of Titania, and we’ll want to run her as well. With the extra mana production, we’ll be able to cast some big haymaker spells ahead of time as well as always be able to handle the commander tax from recasting our commander.

I’m including a bunch of other mana ramp, some Elf cards, some other cards: 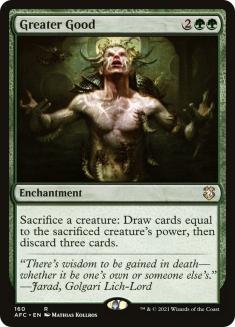 I wouldn’t normally reach for Greater Good in an Elf tribal deck since most Elf creatures are quite small, but Abomination of Llanowar is usually going to be a pretty good size early on and just get bigger and bigger as the game progresses (so long as your graveyard doesn’t get nuked too often). Sacrificing Abomination of Llanowar to Greater Good is a great response to an opponent’s removal spell or steal effect, and dumping a few extra Elf cards that you don’t need in the graveyard ensure the next time you cast your commander it will be that much bigger.

I’ve included a bunch of other good card-drawing spells too:

I particularly like two new additions from Commander Legends!  Gilanra, Caller of Wirewood draws an extra card when you cast a big spell with its mana, and Miara, Thorn of the Glade lets you turn extra mana you may have available into cards and life whenever an Elf you control dies—and let’s be real, your opponents are going to do their best to ensure your Elf creatures die early and often. 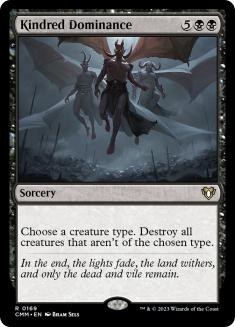 When it comes to removal spells, Kindred Dominance is a rock star in tribal decks.  Its mana cost is a bit hefty but, in an Elf, tribal deck, that mana is not going to be an issue. Clearing away all potential blockers might be just what you need to crash through with Abomination of Llanowar for a commander damage K.O.!

The Golgari color combination brings a lot of removal options to the table and I’m including a bunch of them here:

Glissa Sunseeker is a card I’ve been adding to my decks more and more lately.  Being able to destroy problematic artifacts like various Equipment by just creating mana is something that’s been quite good for me, but in this deck Glissa is even better—she’s an Elf so she plays nice with all the various Elf synergies, and there are ways to untap an Elf so you can even activate her ability more than once a turn. 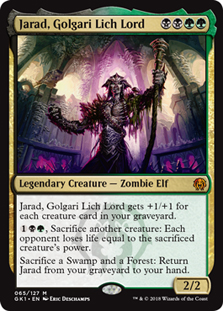 Jarad works great in this deck! Much like the commander, he gets bigger the more creatures are in your graveyard, but the real beauty comes from his activated ability: sacrificing a huge Abomination of Llanowar can win the game on the spot! With all the mana abilities in this deck, sacrificing a Swamp and a Forest to return Jarad from the graveyard to your hand won’t be that big of a deal if you need to bring him back.

I’m including a few other ways to interact with our opponents:

Of course, Torment of Hailfire is the baller of Elf ball mana sinks; I don’t normally put this card in my decks, but it just seems like the perfect sort of X-spell to close out games in a Golgari Elf ball deck with a commander that has abomination in its name. Apologies in advance to my future opponents! 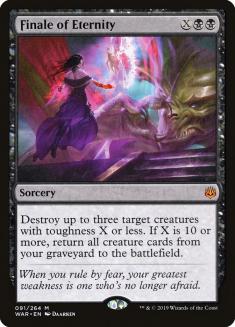 It wouldn’t be Golgari if I didn’t include some graveyard recursion, and the perfect inclusion for an Elf ball deck is the X-spell Finale of Eternity! Am I being a bit too optimistic counting on twelve mana for the full effect on this spell?  Maybe, but even if I’m short I’ll still be able to kill up to three creatures most of the time with this spell.

Malakir Rebirth and Agadeem’s Awakening can also bring cards back from the dead.  Elvish Dreadlord has a great effect when it dies, and it’s encore ability is stunning—once all of the tokens die either in combat or at the end of the turn, you get to give all non-Elf creatures -3/-3 for each opponent, up to a whopping -9/-9! 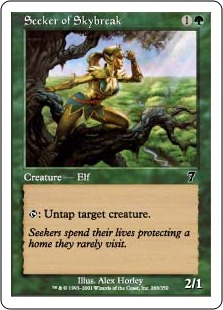 One thing I love about Elves is that so many of them have cool utility abilities, and one of my favorites is Seeker of Skybreak. Whether it’s squeezing an extra activation from a tap ability (like Glissa Sunseeker) or giving an attacker pseudo-vigilance by untapping it after it attacks, or just being able to aggressively attack early on (2 power for two mana), Seeker of Skybreak is going to do some work.

It feels good to get Deathrite Shaman back in action. With Triomes available, fetchlands like Wooded Foothill are more popular than ever so Deathrite can help you with mana production early on and later it can manage any grindy graveyard shenanigans your opponents might be up to. I’ve put Tajuru Preserver in lots of decks these days due to its ability to protect against sacrifice effects like Grave Pact or the annihilator ability of older Eldrazi cards, so it’s doubly nice to take advantage of it being an Elf.

Higher mana cost Elf cards are far and few between but Izoni, Thousand-Eyed and Realm Seekers are certainly worth the slots.

8. Prowess of the Fair 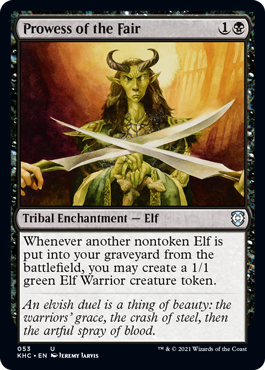 I purposely didn’t lean too heavily into cards that produce Elf token creatures because when the tokens die they don’t help Abomination of Llanowar get any bigger, but there are some that are well worth running, and the best of the bunch is Prowess of the Fair.  This enchantment basically maintains an Elf presence on the battlefield even if your opponents cast removal spells to destroy your Elf cards, which can boost your commander and provide good chump blockers if you need them. Plus, it’s a Tribal Enchantment that counts as an Elf for Abomination if it ends up in the graveyard.

Here are other token-producing or token-enhancing cards that made the cut: 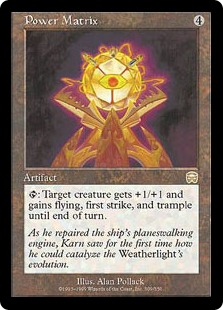 If you’re a regular reader you may recognize Power Matrix has been making many of my lists of late. This old school gem from Mercadian Masques does a lot of things I need for this slot—it helps Abomination of Llanowar trample over chump blockers with trample, it smacks down deathtouch creatures with first strike, and it lets it block flying creatures if that’s what you need from it. What really puts it over the top is that you can use the ability to target an opponent’s creature if it is attacking another opponent or if you want to help give them a flying blocker for political reasons.

Trample is going to be a big ability for Abomination of Llanowar, so I’ve found room for a few other cards that give trample too: 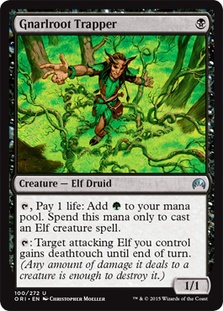 Of course when it comes to giving multiple abilities to creatures, no combination is quite as sweet as trample plus deathtouch, especially on a creature that can get as huge as Abomination of Llanowar, and lucky for us we have an Elf that can fill that role by tapping to give target attacking Elf you control deathtouch until end of turn. It can also tap to add a green mana to your mana pool if you need that for a small point of life payment.

Below are a few other Elf creatures that have inherent deathtouch that can benefit from the trample cards we listed above:

Ochran Assassin does some great work in an Elf tribal deck since the more power you can give it the more creatures it can take out that your opponent controls when you attack.