It’s Ikoria Commander preview weekend and the cards are coming in hot and heavy!  Our friends at Wizards of the Coast (WotC) offered me the opportunity to share this with you, which I did via Twitter just before we went to press.  You can only do so much in 280 characters, so now I’ll discuss the card more in depth.

We’ll talk today about some of the basic uses for Cartographer’s Hawk, some ideas which are slightly more advanced, and how it might play with some other format staples. Finally we’ll put it together with some of the other cards which have already been previewed this weekend.

Cartographer’s Hawk is a 2/1 flyer for 1W, inexpensive for many formats.  It addresses one of white’s weaknesses in Commander (assuming it’s not also paired with green), which is ramp.  The triggered ability is pretty simple —when it does combat damage to a player that controls more lands that you, you can search up a Plains card and put it onto the battlefield tapped.

What many of you have picked up right away is that it’s any Plains card, not just a basic one.  It can get your whole suite of dual lands, to include OGs like Plateau, Savannah, Scrubland, and Tundra.  You can search up the shocklands, including Godless Shrine, Hallowed Fountain, Sacred Foundry, and Temple Garden.  It will get a few that you might not think of, such as Canopy Vista, Irrigated Farmland, Prairie Stream, and Scattered Groves.  There are also two which only produce white mana.  Idyllic Grange is a little underwhelming since its triggered ability only happens if it enters the battlefield untapped.  The other is a personal favorite, Mistveil Plains. 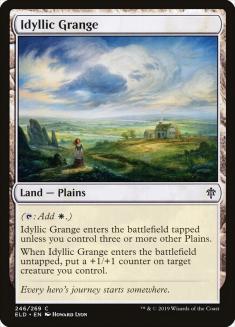 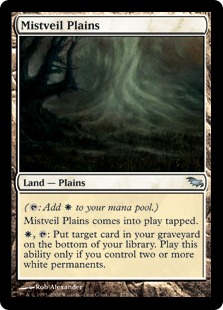 Mistveil Plains is useful in returning things to your library from the graveyard.  You can only activate the ability if you control two or more white permanents, but that’s going to be the case most of the time anyway.  While the basic use of the card is to just slowly give you the opportunity (after a shuffle) to again draw your library cards, it will also save a card from target graveyard removal.  I find that in the decks in which I run it, I mostly use it on instants and sorceries, since white does a pretty decent job of putting permanents back onto the battlefield with cards like Sun Titan and Emeria Shepherd.

Cartographer’s Hawk is obviously a Bird, so it’ll go into your Bird tribal deck, no doubt led by the saucy Kangee, Aerie Keeper.  You don’t need a tribal deck to make it work; it’s a fine utility creature in its own right.  It has flying, and it’s highly unlikely in the early-game everyone will have blockers, so its relatively small body isn’t a problem.

Once you have Cartographer’s Hawk on the battlefield, remember to not reflexively drop a land as the first thing you do on a turn.  It might mean the difference between being able to get the triggered ability or not, or it might inform whom you can attack.

The slight downside is that you need to return it to your hand in order to get the benefit of the triggered ability.  You’ll have to cast it again, which means without haste, you’re likely getting the benefit only every other turn.  If you look a little more closely, it’s not actually that much of a downside.  Because you’re ramping with the card, you’re creating equilibrium with the player(s) ahead of you on land.  If they’re not also ramping or unless you’re missing your normal land drops, you won’t likely meet the condition every turn.  Sure, you’ll have to spend the mana to recast the spell, but that’s where we can turn what seems like it might be a negative into an advantage.

The “Slightly More Than Basics”

Putting an inexpensive creature back into your hand is a great deal of upside when you want to take advantage of enters-the-battlefield triggers, spell-casting triggers, storm count (although that seems unlikely in white), and more.  Especially at later points in the game, two mana is insignificant in the overall scheme of things.  With Zendikar Resurgent on the battlefield, you’ll be happy to have the capability of tapping a single land to draw a card.

Putting the card back into your hand also means that it’s not vulnerable during other players’ turns.  If you suspect that there’s a battlefield sweeper coming, then you have the option of not casting it again.  If you’re planning on a sweeper of your own, you can also keep it safe.

If you have deck in which a larger hand size matters, then putting Cartographer’s Hawk back bumps it up.  It’s a small bump, but every little bit counts.

While going first is a large advantage, when you’re playing effects like Cartographer’s Hawk, Land Tax, and its cousins, you might think about not going first.  You generally choose who goes first before you look at your opening hand, so if you win the roll, you might have some thinking to do.  Remember that winning the roll means that you get to choose who goes first; it doesn’t compel you to be in any particular seat.  You know the number of Oreskos Explorer-type cards you’re playing, so you can do some quick math.  If I’m playing a deck with more than a few of those types of cards in it, I always want to go no earlier than second.  You can also normally count on at least one player ramping in a Commander, so you might not need to worry about it.  When everyone reveals their commanders, look for the green player.  That’s the one you’ll be attacking.

Let’s take a look at some cards already getting played in Commander that go along with Cartographer’s Hawk. The list isn’t exhaustive, but I’ll find examples for all the above angles we’ve mentioned. 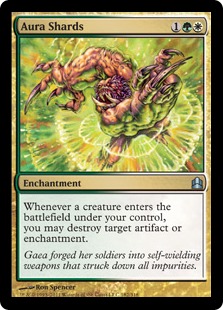 When you have Aura Shards on the battlefield, you want as many creatures to join it as possible.  When you have one that’s easily repeatable, you’re in the driver’s seat when it comes to enchantment and artifact control.  There are always great targets for the Aura Shards trigger in Commander—until you’ve done all the work. 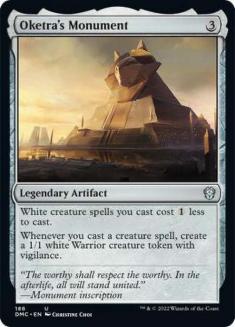 You get double the value with Oketra’s Monument.  Your Bird is one cheaper to cast, and when you cast it, you get the trigger from Oketra’s Monument that will make a 1/1 White Warrior creature token.  That’s what the kids call value.  You might have to be careful with other cast triggers, like Karametra, God of Harvests, since that puts lands onto the battlefield, possibly neutering Cartographer’s Hawk’s ability—but then again, that’s not a terrible problem to have.

Lifecrafter’s Bestiary is another creature-spell trigger that seems like a criminally underplayed card in the format.  You’re in green anyway, so you likely have plenty of mana to pay the for the triggered ability.  If you want to get a little techier, consider Bygone Bishop. 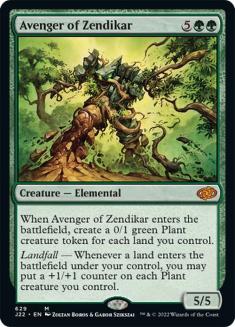 Ramp abilities play right into landfall triggers, so Cartographer’s Hawk will help Avenger of Zendikar’s Plant tokens get bigger.  But that’s in a different color.  If you’re playing mono-white or you just want extreme value, you also have… 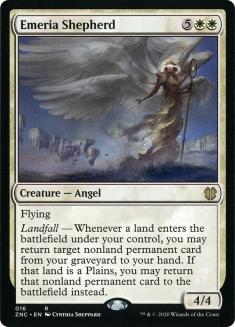 One of the sauciest cards to come along for Commander in recent history. It’s hard to believe it’s already been more than four years since Battle for Zendikar.  The set still feels so new.  Anyway, these two were made for each other, as Cartographer’s Hawk will hone in on Emeria Shepherd’s ability to put a permanent directly onto the battlefield from your graveyard.  Then you still get your normal land drop for the turn.  See also: Admonition Angel. 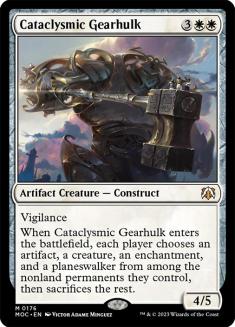 The white Gearhulk is good battlefield control, especially if you don’t have too many of any one thing.  You’ve used Cartographer’s Hawk to get the land you need, and now that it’s back in your hand, you can save your creature slot for choosing something else—like the Gearhulk itself, should you have an artifact you really want to keep. 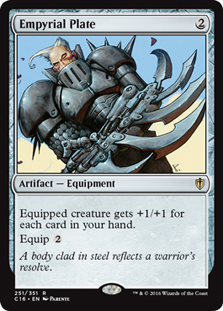 An inexpensive piece of brutality for your Voltron decks, Emyprial Plate can make your commander deadly in short order. Cartographer’s Hawk ticks up the damage, and sometimes one is all you need.  Other hand-size-based favorites in the format include Sword of War and Peace and Venser’s Journal.

This one isn’t about putting Cartographer’s Hawk back into your hand, but about its toughness.  It’s easy to kill, which means that it’s easy to get into the graveyard.  You can chump block nearly anything with it.  If you want to cast Karador a little sooner, our new favorite Bird will hook you up.  Then, once you’ve cast Karador, the Hawk is easy to cast again.  You’re running sacrifice outlets in your graveyard deck, so it’s also nice fodder—especially when you have Grave Pact on the battlefield.

We’re just in the process of seeing the Ikoria Commander cards this weekend, and we only saw a few at the end of the week, so there isn’t yet much to choose from—but the ones that we’ve seen yield some excellent possibilities. 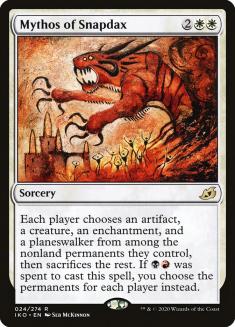 Cartographer’s Hawk’s ability returning itself to your hand plays as nicely into Mythos of Snapdax as it does with Cataclysmic Gearhulk.  The great design part of the card is if you pay black and red instead of the two generic mana, you get to make the choices for all your opponents as well. I guess black and red are pretty rude together.  Since some folks have asked, the color identity of the card is WBR, so you can only play it in Mardu and appropriate four- and five-color decks. 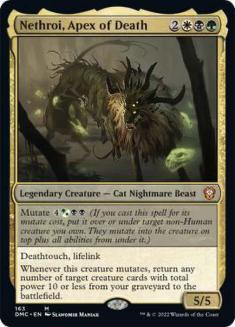 If it’s not leading a deck of its own, Nethroi is certainly going into your Karador build.  Either way, it interacts with Cartographer’s Hawk in a crazy fashion.  You’ll likely put Nethroi on top, giving you the greater power and toughness while still keeping Cartographer Hawk’s flying and triggered ability (not to mention Nethroi’s lifelink and deathtouch).  When you mutate Nethroi, you’ll get the triggered ability, returning ten power’s worth of creatures from your graveyard right onto the battlefield.  Then you can attack an appropriate target, and the Hawk ability will trigger, putting the entire stack back into your hand (if you want).  Now you can repeat the whole process. 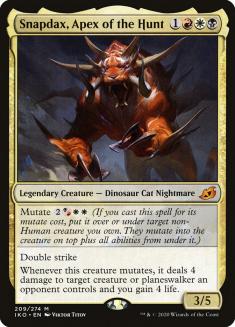 Cartographer’s Hawk will interact with all mutate cards pretty much the same as it does with Nethroi, although there’s a trap here.  Snapdax gives the stack double strike.  If you’re going to use the Hawk bounce ability, let it deal first strike damage, and then use the trigger during the normal damage step.  If you return it to your hand during the first strike damage step, it won’t be around to deal the rest of the damage.

Cartographer’s Hawk helps solve a problem that white routinely experiences, namely keeping up with other colors when it comes to ramping.  It does so in a way that’s both innovative and opens up deckbuilding and play pattern choices for you.

Thanks to Wizards of the Coast for sharing this free preview with me.  It’s only the beginning of the preview season, and we’re already in thoroughly exciting territory.  I know that you’re going to enjoy all of it.