Prominent Amulet Titan streamer Fpawlusz noted that he’d been struggling with the deck recently because of the rise of Aether Gust in Modern.  This lines up perfectly with my experience, which is that Amulet Titan really can’t compete with Uro, Titan of Nature’s Wrath in conjunction with Aether Gust and Mystic Sanctuary.  The deck relies too heavily on Primeval Titan, and it’s just too hard to get it to hit the battlefield.  This lead him to develop a different approach to exploiting Dryad of the Ilysian Grove with Field of the Dead and Valakut, the Molten Pinnacle that shows real promise.

Let’s start where Fpawlusz left off — as far as I know, this is his most recent 5-0 list:

This is an unusual approach to playing with Aether Vial, which is generally played in decks with few lands since it’s essentially an extra mana source, but this deck can get away with it by making the most of the mana saved by Aether Vial to activate Elvish Reclaimer and sacrifice Tireless Tracker’s Clues. 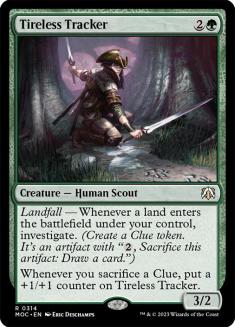 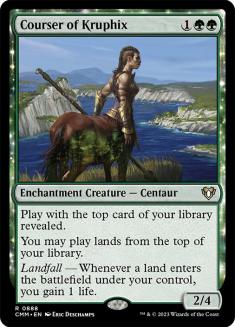 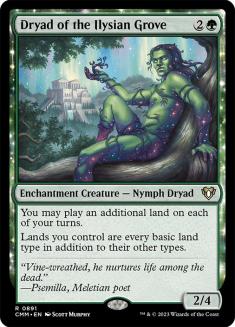 The core of the deck is the combination of three-mana green creatures that interact with lands — Tireless Tracker, Courser of Kruphix, Ramunap Excavator, and Dryad of the Ilysian Grove. All of these cards are great together, but it can be hard to build decks that use all of them because you want so many spells that cost three mana.  Aether Vial allows you to get multiples of these creatures onto the battlefield quickly enough that you can take advantage of the synergies between them. 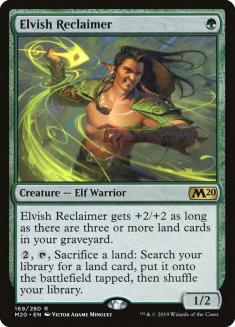 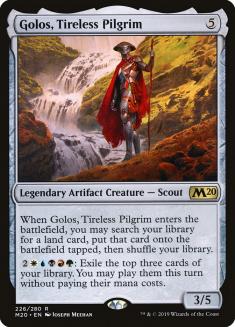 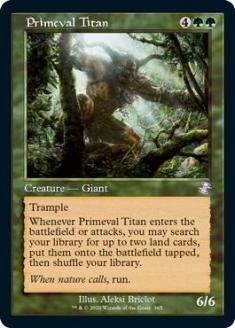 The deck has three creatures that allow you to search your library for specific lands — Elvish Reclaimer; Golos, Tireless Pilgrim; and Primeval Titan.  This deck was created as an evolution of Amulet Titan so it features a robust selection of utility lands to take advantage of these cards.  These lands can be divided into a few categories: 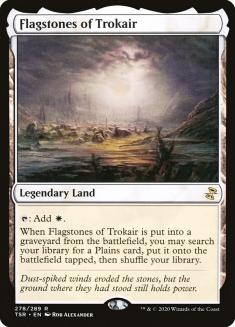 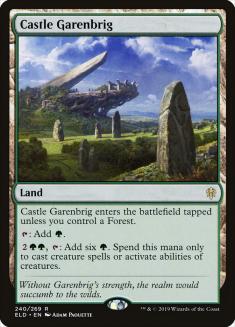 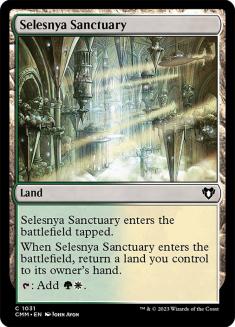 These lands are part of your ramp package.  Most often in the early-game you’ll activate Elvish Reclaimer to chain through multiple copies of Flagstones of Trokair to build extra lands on the battlefield.  Castle Garenbrig allows you to cast Primeval Titan with only five lands. Selesnya Sanctuary isn’t ramp in the traditional sense, but it can allow you to get more mana onto the battlefield than you’d otherwise be able to thanks to Dryad of the Ilysian Grove, can also give you additional triggers from lands entering the battlefield, and can sometimes help get the colors of mana you need by picking up and replaying a tapped land that enters the battlefield untapped. 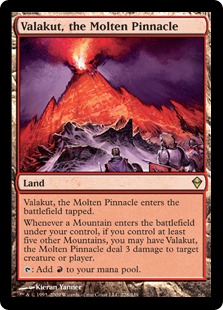 These are your “finishers.” Your default plan with this deck is just to build up enough lands on the battlefield that you can trigger one or both of these lands several times.  Valakut is generally better if you have Dryad of the Ilysian Grove, but if you don’t, Field of the Dead will usually be good enough. 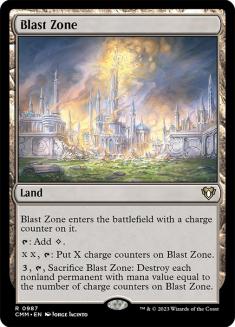 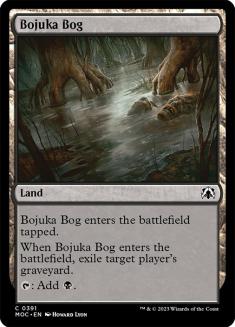 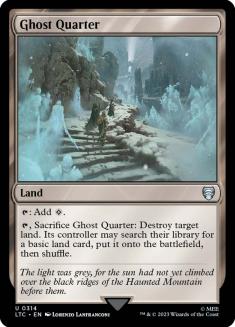 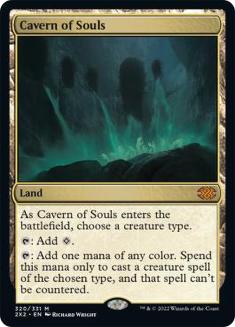 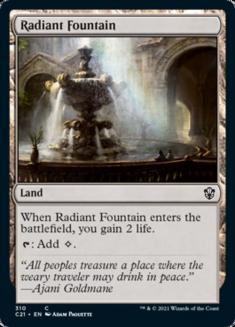 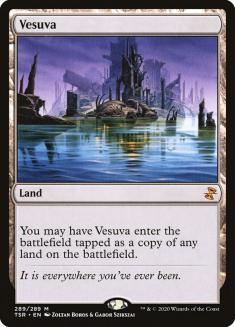 These are your utility lands.  These bullets offer various forms of interaction that you can search for as needed. 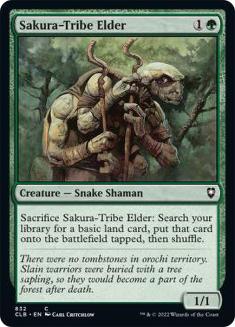 Sakura-Tribe Elder is pretty straightforward. The purpose of this deck is to get a lot of lands on the battlefield and Sakura-Tribe Elder helps with that. What’s more interesting is the use of precisely two copies. This deck wants a large number of actual land cards, since the lands are the cards we’re searching for most often, so the more lands we can afford to play, the more options we’ll have and the more powerful our searching will be.

At the same time, we can only play so many cards that are dedicated to producing mana/getting lands on the battlefield because we need some impactful cards.  Additional copies would either have to replace lands or spells; replacing lands would make all of our searching weaker, and replacing spells would cut into our impactful plays.

I like the first Sakura-Tribe Elder because it’s easy to imagine situations where we have an Aether Vial with two counters and want to Eladamri’s Call for Sakura-Tribe Elder to take advantage of the Vial in that way on that turn, but the second copy seems flexible to me.

This is a weird card to see in a ramp deck, since it doesn’t specifically interact with our synergies and we generally want all of our spells to be very high impact because we have so many lands.

In matchups where Thalia isn’t great, it’s a horrible fit for this deck.  However, it plays well with Aether Vial by slowing the game down, giving your more time to build up counters on your Aether Vial relative to when your opponent will be doing things (if they’re trying to cast noncreature spells and Thalia lives).

The real selling point of Thalia is that it interacts with things the rest of the deck doesn’t. This kind of deck is historically weak against spell-based combo decks and Thalia is the most impactful card we could play against those.

This will be among the cards that is sideboarded out the most, and in many ways, playing it maindeck is like presideboarding. It’s not here to further our own plans – it’s there to interfere with our opponent – but we think that enough of the people who we’ll play against who are likely to beat us will be weak against Thalia that it’s worth the space.

If this deck becomes a fixture of Modern, I’d expect that there will be times when Thalia is right to play maindeck and other times when it’s not, so I’d consider this something of a flexible slot. 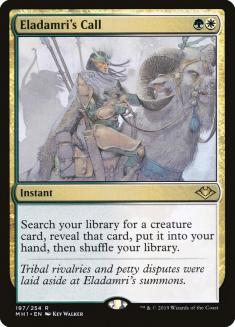 As a rule, I dislike tutors.  Spending mana without impacting the battlefield or gaining card advantage just feels so bad to me.  Tutors are never part of your best draws, since you could have just drawn the card you’re tutoring for if it was your best draw.

Now, obviously you won’t always be that lucky, but I usually feel like I could just play another card I want to draw and cast and find a way to win the game with that instead of wasting my mana on a tutor.  That said, Eladamri’s Call is pretty good here.  Aether Vial is very forgiving about mana investments, our creatures all do very different things, and our deck is at its best when they work in proper combination. 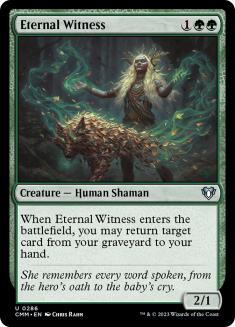 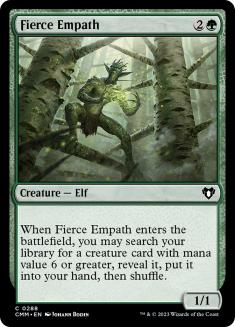 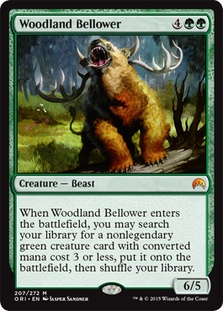 Honestly, I don’t like any of these cards.  Without any interactive instants or sorceries, I don’t think Eternal Witness adds enough.  Fierce Empath and Woodland Bellower mostly feel like worse tutors than Eladamri’s Call.  We’re not doing anything with the 1/1 body from Fierce Empath, so we’re basically spending an extra mana to restrict our options, except that it adds an option to Woodland Bellower, but again, we don’t really care that much about the random large body it provides, and if our goal is to have more access to Dryad of the Ilysian Grove, we could just get that for five mana with Eladamri’s Call.  Woodland Bellower is good value against midrange decks, but the basic land engine is at its best against those decks.

So what other cards might we want to consider?

More recently, Fpawlusz has played with one Knight of the Reliquary and one Shalai, Voice of Plenty instead of the Fierce Empath and a Courser of Kruphix.  Knight of the Reliquary does what we’re looking to do, but it has the issue that, because we have so many utility lands, we don’t always have Forests and Plains to sacrifice.  Also, with few fetchlands, it’s generally not especially large when it enters the battlefield.

That said, I think we have enough Forests and Plains to take advantage of Knight of the Reliquary, and Dryad of the Ilysian Grove allows it to sacrifice any land, so it can do Elvish Reclaimer tricks with Flagstones of Trokair sometimes. I like the idea of playing at least one of those.

Shalai, Voice of Plenty is less exciting to me.  It does a bunch of things that are fine, but I prefer more focus rather than less. 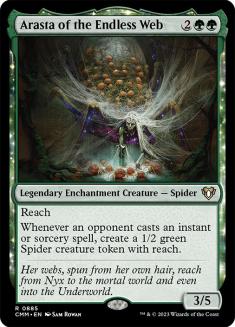 Another card he tried is Arasta of the Endless Web, which is an amazing card against Prowess, but I’d guess it’s a better sideboard card than maindeck card. 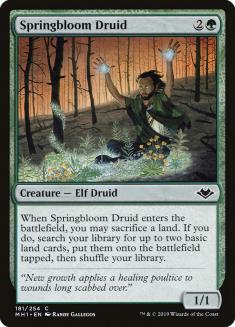 I’m also interested in the idea of playing one Springbloom Druid, as it’s an explosive ramp spell if you have a Flagstones of Trokair to sacrifice, so I think there are times you’d be happy to Eladamri’s Call for it.  I’m not sure if this would be replacing the second Sakura-Tribe Elder or another card.  They’re similar in function, but I don’t love decreasing the deck’s two-mana plays.

Outside of Knight of the Reliquary and Springbloom Druid, I think I like focusing on doing what the deck already does better rather than playing a wider variety of bullets.  This means I’m more interested in playing more copies of the good creatures or more Eladamri’s Call rather than more fringe options.

As for the sideboard, after this 5-0 League, Fpawlusz has cut a Celestial Purge, the Force of Vigor, and an Aven Mindcensor for two copies of Veil of Summer and a Gaddock Teeg.

It’s worth noting that he also cut the Cavern of Souls (because the text is redundant with Aether Vial and the deck already struggles somewhat with colored mana — the additional Windswept Heath that replaced it also improves Knight of the Reliquary), which makes Veil of Summer a little more important.

It’s hard to argue with playing the first few copies of Veil of Summer whenever it’s legal, but I’m sad to see the third Celestial Purge go.  It’s a great answer to Blood Moon; Magus of the Moon; and Ashiok, Dream Render and you can comfortably bring it in in a lot of matchups without fear that it will be too narrow.

Gaddock Teeg is great for the same reason this deck likes Thalia, Guardian of Thraben — it lets you interact in ways you otherwise couldn’t.  I wonder if Eidolon of Rhetoric would be better than the third Damping Sphere, but it only does half of what you’re trying to do with Damping Sphere.

It’s worth acknowledging that Path to Exile, Celestial Purge, Veil of Summer, and Damping Sphere are all great, and when we try to play those and include creatures or even potentially lands to search for in the sideboard, space is really tight.  This means that there’s a lot of pressure to play cards that might otherwise belong in the sideboard in the maindeck, which is why it’s hard to push Thalia to the sideboard, and possibly why Eternal Witness was in the maindeck.

With all of this in mind, this is the version of this deck that I’d play:

Overall, I really like this deck and I’m excited to see how it develops.  It’s always great to get this much power out of the lands in a deck and I think this keeps a lot of the strength of the Dryad of the Ilysian Grove ramp decks we’ve seen in Modern with a little less reliance on resolving key spells and a better ability to play a Legacy Maverick-style midrange creature game combined with an over-the-top ramp finish contained entirely in the lands.