Over his nine years at Wizards of the Coast (WotC), Gavin Verhey has designed many cards. On today’s episode of Good Morning Magic, he details three of his favorite legends he helped create. 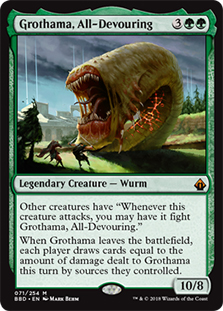 As the lead designer of Battlebond, Verhey wanted a monster that played along with MOBA tropes that if killed gave your team a boost. Originally it entered the battlefield under another player’s control, then you got a bonus for when you killed it. When Grothama died you would gain two life, draw two cards, make two 1/1s, and put two +1+1 counters on all creatures you control, but this version was just a combo with a removal spell. So the next version entered under your control and it had to attack and block if able, but had a “respawn timer” when it died by going to the top of the library. It eventually led to the version we see today after some tweaks to when creatures would fight Grothama so more players had agency over what happened to it and how it impacted their creatures. 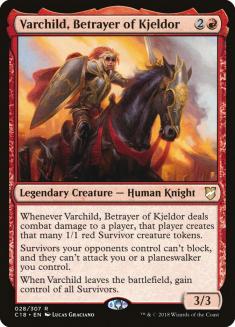 Verhey was leading the Commander 2018 team and needed an extra non-forward facing legend for the blue and red deck. He was recommended Varchild as a character, so he immediately wanted to use Survivor tokens as a reference to the Varchild’s, War-Riders. It originally gave opponents Survivor tokens each turn and when they died Varchild got a +1+1 counter, but no one wanted to do anything with the tokens so they switched the card to its current version to change the incentives. Verhey also teased that more callbacks like Varchild would be coming in Commander Legends. 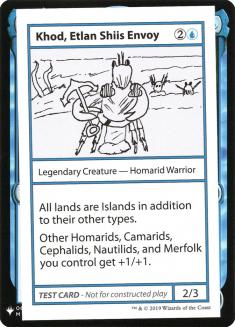 Verhey wanted to please those wanting a Homarid commander as well as give the sea creatures another lord. He hinted at the future creature type Nautilids being terrifying and gave some lore on Khod, who was named after the cod type of fish. Etlan Shiis is a reference to Atlantis (say them both aloud), from Lord of Atlantis. Mystery Booster was a perfect set for getting cards like Khod, Etlan Shiis Envoy into the game.