Unfinity is Magic’s first Un-set in five years and a lot has changed. We tearfully wave goodbye to silver-bordered cards and usher in a new era of acorn holo-stamps, stickers, and Attractions. Un-sets have drastically changed since their debut in 1998, but the wacky spirit of it still lives on this 1950s-esque space-flavored theme park set. While previews for Unfinity have only just begun, already we are seeing some interesting Eternal-legal and -illegal legendary creatures and cards that give me the brewing bug. One such legendary creature caught my eye and inspired a wacky deck I think you will certainly enjoy. 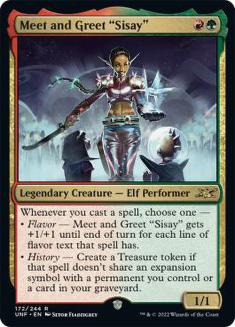 Meet and Greet “Sisay” hits all my marks for an Un-commander. The card is a wonderful meta joke about a popular character in Magic’s history, and the abilities are based on actual physical cards rather than card abilities or synergies. She pays attention to expansion symbols and flavor text as opposed to, for example, token creatures, artifacts, or how much noncombat damage you do. Not to mention that her low mana value makes her a guaranteed cast on curve, which an aggressive brew really wants to do. This card feels like a callback to the silver-bordered Un-sets of old, and I immediately knew I wanted to do something fun with her.

Before we dive into the brew, I want to highlight that the Commander RC does not see cards with acorns as being legal in Commander. Their ruling was similar to when Wizards of the Coast (WotC) was printing silver-bordered cards, as they were easily identifiable as illegal pieces. Acorn holo-stamps have taken the place of silver-bordered cards and are also not legal within the format. Therefore, this deck is an illegal deck, and cannot be played in a tournament Commander setting.

However, it can be played amongst friends or a group at your LGS after an open discussion during the Rule 0 period before gameplay. Rule 0 is an important pregame discussion that encompasses everything from illegal decks and mutual respect to power levels. While Rule 0 often comes up in conversation regarding decks like this, a pregame conversation should be had at the start of any and all commander games.

Normally, when I brew a deck, I try to add cards that synergize with the commander or combo off in some way to give the list some extra mustard. Meet and Greet “Sisay” is interesting because she can run any kind of card so long as it meets and greets her requirements: expansion symbols and flavor text. The only main synergy I could think of adding would be token doublers for her Treasures or doubling her triggered abilities with Strionic Resonator or a Lithoform Engine. But that doesn’t sound fun or wacky or in the spirit of an Un-set. So rather than brewing a combo-centric deck, I decided to brew something a bit more simplistic that requires way too much reading and counting (math and words hurt my brain). 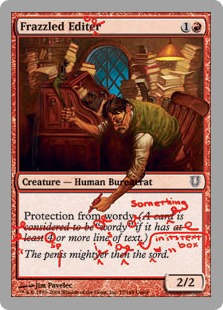 Starting out with the deck’s main strategy, I wanted this list to be full of set specific cards with insanely long pieces of flavor text to buff up “Sisay” and make her hit very hard early on…and maaaaaybe make Treasure tokens if we need to in a pinch. Sure, making Treasures is nice, but “Sisay” wants to be fast and aggressive. She can make mana if you need it, but ideally, we want a beefy commander swinging early on to make the games go fast! So this poses the question: “Did you run very specific printings of cards in order to get the perfect balance of expansion symbols and flavor text?” The answer is yes. Yes I did.

When looking at “Sisay”‘s flavor ability, I knew I wanted to be aggressive with this list. I wanted to fill the brew with a lot of flavor-text-heavy cards to give her buffs early on. With “Sisay” being a two-mana-value commander, she seems ideal for an aggressive early-game strategy. “Sisay” cares about the number of lines of flavor text, meaning each card in this list has been selected with purpose.

I won’t lie: brewing this was a bit tedious because we had to painstakingly comb through each printing of a card to see which one had the most flavor text on it. This stipulation led to some intriguing inclusions. While there are dozens of spells in this list, I wanted to highlight a few of my favorites. 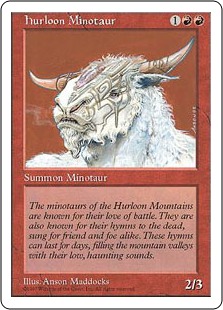 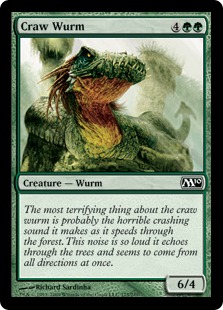 This deck runs creatures like Hurloon Minotaur, Cylian Elf, Pensive Minotaur, and Craw Wurm that come with large walls of text. They may seem like boring, almost vanilla creatures, but what they do for “Sisay” is intense. When cast, the Wurm gives “Sisay” +6/+6, Pensive gives +7/+7, the Elf gives +4/+4, and Hurloon gives +7/+7. These buffs are absolutely incredible!

Another thing I enjoy about “Sisay” is that she cares about spells, both creature and noncreature. It is unfortunate that lands don’t count, but I do have to admit that would be rather broken. She doesn’t mind so long as it has a lot of flavor text. Harmonize, while providing decent card draw, gives “Sisay” a +5/+5 buff. Beast Within is not only removal, it buffs your commander by +4/+4. Rhythm of the Wild gives either a counter or haste and +2/+2, and a flippin’ Sol Ring gives +6/+6! How insane is that?! Playtesting “Sisay” proved to be incredibly fun and fast, with me dealing twelve commander damage to an opponent on Turn 4. Pair this with my favorite nonbasic land ever, Rogue’s Passage, and you will be unstoppable!

Let’s move on to “Sisay”‘s history ability. Rather than giving her a buff, you can choose to create a Treasure token if the spell you cast doesn’t share an expansion symbol with a card you control or a card in your graveyard. I find this ability to be less appealing because you only get one Treasure, whereas in her flavor ability, she gets multiple buffs. Despite this, I wanted to cater this deck to both of her abilities. Not only is this brew incredibly selective of its flavor text, it is also incredibly selective of its expansion symbols as well. 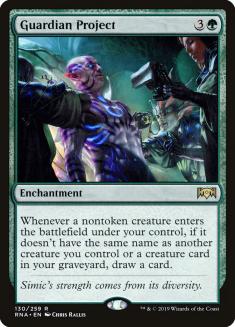 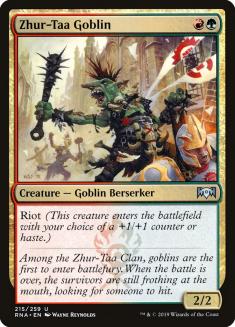 While I tried my best to make sure there was no overlap, we ended up having a few doubles. This deck does run a few Secret Lair cards that have shooting star symbols, like Birds of Paradise and Sol Ring. Modern Horizons 2 has Ornithopter of Paradise and Goblin Anarchomancer, Onslaught has Wirewood Elf and Wave of Indifference, the Warhammer precons have Rampant Growth and Commander’s Sphere, Ravnica Allegiance has Guardian Project and Zhur-Taa Goblin, and Battle for Baldur’s Gate has Arcane Signet and Mind Stone.

While this might seem like a lot, it is rather minimal when taking flavor text into account. Having doubles isn’t necessarily a bad thing, though you have to be keenly aware of permanents on your battlefield and cards in your graveyard, otherwise you won’t get a Treasure from “Sisay.” No one wants to wait in line, only to find out that the Meet and Greet hours have ended before you could say hi to your favorite Magic character.

I love Un-sets so much, it would make sense that my two favorite cards in this deck are silver-bordered. Not only are they insanely powerful, they seem as though they were made to be run alongside “Sisay.” 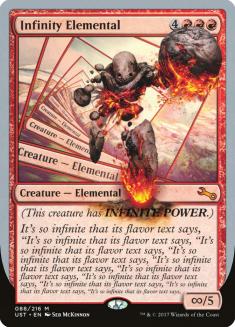 Let’s talk about Infinity Elemental and Symbol Status. Infinity Elemental is an infinite creature from Unstable…literally, it’s infinite. The card says so. Not only does it have infinite power, the flavor text is infinite as well! By the rules of silver border silliness, this will give “Sisay” an infinite buff! This makes her lethal. Not only is it ridiculous, it’s exactly what your commander likes! You love to see it. 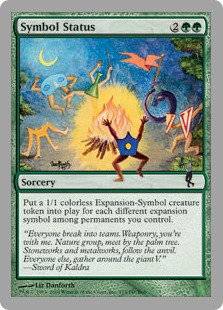 Symbol Status, while also having a lot of flavor text, synergizes in a fun and flavorful way with “Sisay”‘s Treasure-making ability. It makes tokens, but instead of Treasure tokens, it makes 1/1 Expansion-Symbol creature tokens for each different expansion symbol among permanents you control. This list runs a wide variety of expansion symbols, with only a few overlapping once, meaning you will get a battlefield full of creature tokens.

Sure, these two cards aren’t legal in Commander, but so is the entire deck! Finding these two pieces really felt like adding the cherry on top for this fun and weird brew. While I love that this list has a majority of black-bordered spells, I would definitely be interested to see what an entire silver-bordered brew would look like with “Sisay.”

My favorite thing about commander is that while there are rules, there aren’t really any rules. This “Sisay” deck is definitely not legal, but with a well-placed pregame discussion, can definitely find a home in a pod amongst friends or at your LGS.

Whether you plan on playing them or not, brewing decks with Un-cards can help stretch and even build your deckbuilding muscles. With more and more cool and interesting legendary creatures being previewed in Unfinity, I am definitely finding myself eager to brew some wacky, wild, and illegal lists. Happy brewing, deckbuilders.