Back in the day, Un-sets were initially viewed as inside jokes to those who were invested in Magic: the Gathering. From the iconic Mox Lotus to Richard Garfield, Ph.D., these silver-bordered squares were small nods to the game and those who loved it and nothing more. Sure, certain pieces are rare, some even expensive, however they remain collector’s items and a time capsule of the old days of Magic. Unfinity on the other hand, seeks to change this by integrating eternal-legal cards into Magic’s joke set. This means that they are legal in Commander, Vintage, Legacy, and Pauper. But what are some decent pickups for the Commander? Well, let’s hack our way through the popcorn and cotton candy and talk about some fun eternal-legal pieces for Commander! 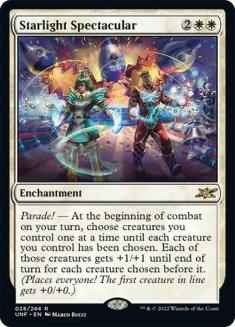 It’s time for a parade! Starlight Spectacular is one of the few eternal-legal pieces that initially stuck out to me as a possible all-star. When I read the card, I initially thought that it had to be an instant or sorcery. But it’s not! This bad boy is an enchantment that I definitely recommend picking up if you have a tokens deck. Starlight triggers at the beginning of combat your turn and buffs up your creatures exponentially for each creature chosen before it. Sure, the math can be difficult to track, but when you have 20 tokens, one of your creatures gets +20/+20, another +19/+19, another +18+18, and you know the rest! The fact that this buff is repeated during each of your combats made me fall in love with this spell. The bigger the parade, the bigger the buff! And with enchantments being regarded as one of the harder card types to remove, I can’t help but recommend this piece for you token players out there! 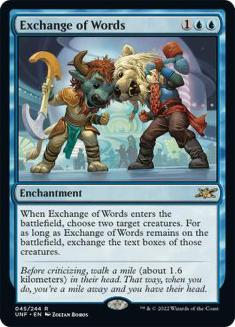 Speaking of enchantments, let’s talk about my next recommendation — Exchange of Words! I love this card because it is a wacky and cheap way to steal someone’s creature…without really stealing them. Text box theft is not a new concept in an Un-set (shoutout to my queen, Phoebe, Head of S.N.E.A.K.), but there is a key difference here in that you exchange text boxes rather than outright steal. I love the silliness of this because you can exchange a Llanowar Elves’ textbox with an Ulamog’s, or even better, with someone’s commander ability. It’s going to be hard to play a Locust God deck when he’s no longer a token making machine and a Carrion Feeder instead. You definitely love to see it. Cheap theft that can lead to laughs? Count me in. 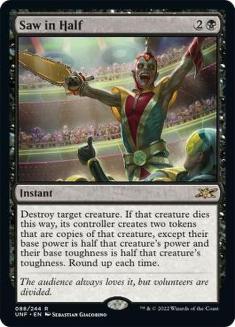 Originally previewed months in advance of the Unfinity preview season, Saw in Half immediately captivated Commander players. The possibilities are quite literally endless when it comes to this funny piece of removal. In all seriousness though, it really isn’t removal, but rather a fun way to maximize the value that certain creatures give you. Want to run two Dockside Extortionists in your deck? No problem –more Treasures for you! Want to draw more cards? Well, Archivist of Oghma is already a Halfling, but he can be Sawn in Half just the same. While you can’t Saw in Half your commander or a legendary creature for ultimate value, the possibilities this card can lead to definitely add up. I enjoy that this card doesn’t make a token copy of a creature but instead destroys the original and then makes two token copies. It’s funny, flavorful, and powerful cards like this that make me excited for the future of Magic. 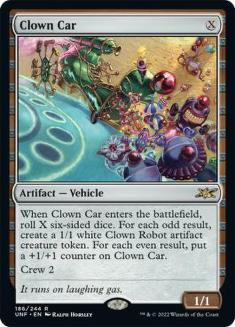 Very rarely do I laugh out loud at something. Yes, I know I am a hollow human being and no, I don’t care. Anway, when I saw Clown Car, I cackled. I am obsessed with the flavor of this card. You get what you put into it, literally. The more the investment, the more tokens and counters you get. The car gives itself +1/+1 counters for each even result you roll and for each odd result you roll, you get an adorable 1/1 white Clown Robot artifact creature token. Not only does this card buff itself, but it generates tokens to crew itself with as well! It is quite literally a self-sustaining clown car. Whether you’re running a Vehicle-themed deck or simply want a fun heavy hitter that also poops out tokens, Clown Car seems like a fun pick up for your Commander deck. 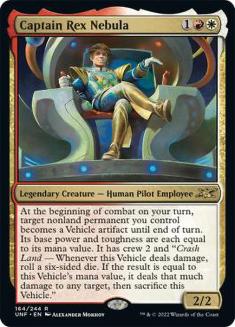 Lastly, we have Magic’s version of Zapp Brannigan — Captain Rex Nebula! This walking wall of text reveals a wild and wacky new way to brew vehicles in commander. I am obsessed with it. Rather than filling the deck with vehicles, Rex turns your nonland permanents into vehicles. Does he drive them well? I hope not, because he gives them the ability Crash Land. When the vehicle deals damage, you roll a die and if the result is equal to the mana value of that vehicle, it deals that much damage to any target! Unfortunately, the vehicle doesn’t survive the crash and you have to sacrifice it. But wow this is such an interesting way to deal noncombat damage in commander. Death by car except the deck doesn’t even need to run vehicles. Captain Rex Nebula turns practically anything he wants into a vehicle, which I find truly hysterical. Captain Rex seems like an incredibly unique and interesting commander to build around, and hey, you don’t need to know anything about Attractions in order to run him. Bonus points!

I will say, it’s definitely weird getting used to the concept of eternal-legal cards in an Un-set, granted, Un-sets are supposed to be weird, wild, and new! Traditionally, Un-sets have been utilized as test space for future Magic designs, so it would make sense to see this sort of evolution. I am definitely excited to see how these cards impact Commander and how my recommendations might influence your decks in particular. Let me know what you think of my recommendations and if you have any of your own!