Preview season for Streets of New Capenna is coming up quickly, so I wanted to spend a little time digging into some of the new legends we have from the Kamigawa: Neon Dynasty Commander decks. The coolest of them has to be our first Vehicle commander, Shorikai, Genesis Engine! 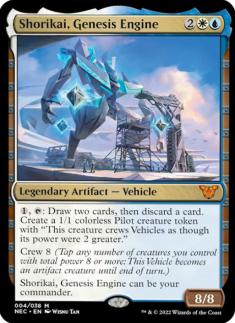 Shorikai, Genesis Engine comes in the Buckle Up Commander deck with Kotori, Pilot Prodigy as the face commander, and there’s no doubt that Kotori makes for a very good Vehicle commander. When considering Shorikai as the commander, there’s no doubt that we could lean heavily into Vehicles too and just port over a big portion of Buckle Up and run with it.  I won’t really address doing that here today.  But I also think that Shorikai offers a lot of power all on its own outside of a dedicated Vehicle Commander deck.

What Else Can Shorikai Do?

First, as a card-drawing engine, it does some serious digging, drawing two cards deep for one mana with a requirement that you then discard a card.  But wait, there’s more – that ability also creates a 1/1 colorless Pilot creature token with, “This creature crews Vehicles as though its power were 2 greater.”  That’s a heck of a deal for four mana to cast and one mana to activate. It’s so good that, even if you didn’t have another Vehicle in your deck, you can still get a lot of value, and I love that it’s a self-contained way to eventually meet that whopping crew 8 ability if you want to eventually turn your Vehicle into an artifact creature.

On its surface, an Azorius deck could simply just want the value of drawing two extra cards a turn while churning out a token creature, fueling whatever strategy might float your boat. However, wouldn’t it be nice to turn the drawback of discarding a card into an upside?  While black is best known for reanimator-style strategies, white actually has a pretty deep bench of cards that can bring creatures and other card types from the graveyard to the battlefield. I’d actually been thinking about this angle of white recently, and I think Shorikai might be the perfect commander to explore that sort of strategy.

Even if I’m not going to be a heavy Vehicle deck, the fact that my commander is a Vehicle and a whopping 8/8 when it’s turned into an artifact creature means that I’d want a fair number of ways to animate it beyond creating three 1/1 Pilot tokens. Katsumasa, the Animator is another legend from the Buckle Up deck and definitely has a home in a Shorikai deck. It even gives your commander flying!  Peacewalker Colossus is another great way to wake up Shorikai, and it costs even less mana to activate.

Relying on an Aura can be a little risky, but playing white and blue gives you the ability to protect your permanents. Aerial Modification might be worth running, especially since it makes Shorikai a whopping 10/10 with flying.

Blue has some other ways to animate artifacts that I didn’t include here because they also tended to set the artifact’s power and toughness considerably lower than 8/8 – for instance, The Blackstaff of Waterdeep. I didn’t really want to bother waking up Shorikai if I was going to make it smaller.

Even if the deck isn’t going to be heavily a Vehicles deck, there are a few cards from that archetype that we’d still want to make use of where we have a Vehicle sitting in the command zone. Prodigy’s Prototype in particular helps you crank out additional Pilot token creatures. Surgehacker Mech provides some direct damage capability that you don’t often see in Azorius.

I do think it would be worth having at least a few other Vehicles in the decklist, including a handful of great new Vehicles from Kamigawa: Neon Dynasty. I love Imposter Mech and Reckoner Bankbuster and would love to have enough artifacts to activate Mechtitan Core to generate a Mechtitan token!

Parhelion II has gotten new life recently thanks to Greasefang, Okiba Boss. If we’re looking at returning cards from the graveyard to the battlefield as a strong element of the deck, an eight-mana Vehicle would be a great card to discard and cheat onto the battlefield later.

Shorikai’s activated ability involves tapping, so it’s worth including ways to untap it to get even more out of its ability.  Unwinding Clock seems perfect here, especially in conjunction with Sol Ring and other mana rocks to pay for the activated ability. Other one-shot untap artifacts like Manifold Key are worth running too.

With your commander being an artifact, it’s definitely worth leaning into cards that synergize with artifacts. I like that Sai, Master Thopterist creates 1/1 Thopter tokens each time you cast an artifact (like a Vehicle), which can conveniently help crew your Vehicles. The activated ability is also a nice way to stop an artifact from being permanently exiled by something like Crush Contraband or Ravenform. Cards like Bronze Guardian and Padeem, Consul of Innovation can help protect your artifacts from being targeted in the first place.

I often forget about Tempered Steel past dedicated artifact creature decks. Being able to pump the power and toughness of Vehicles, which tend to be rather large to begin with, can really up the threat level.

Since our commander generates tokens, we can dip our toes into cards that care about that.  Anointed Procession immediately jumps to mind. So does Divine Visitation.  1/1 tokens are quite nice to feed to Skullclamp for more card draw, while Adeline, Resplendent Cathar appreciates an ever-growing number of token creatures to boost her power. Curiosity Crafter lets you turn your token creatures into card draw engines, while its static ability plays perfectly with our plan to draw a lot of cards.

Since we’re drawing two cards per activation, we might consider dipping into some “drawing cards matters” cards.  Ominous Seas and Nadir Kraken play well with any token synergies we have already.  Psychosis Crawler turns the draw into life loss for each opponent.  Shabraz, the Skyshark grows permanently larger with each activation, and if you happen to have any Humans in your deck, you could potentially give them flying along the way. Tolarian Kraken offers a nice way to turn the card draw ability into a way to tap down a potential blocker or attacker, or to untap one of your own creatures.

Tied to the card draw ability is a discard effect, so let’s look for some ways other than reanimation strategies that might take advantage of it. Containment Construct lets you in effect keep the card you discard so long as you play it this turn from exile. I like that it’s a may ability, so if you want to discard a card to the graveyard on purpose, you can choose to skip the effect. Curator of Mysteries lets you scry 1 with each card you discard, while Drake Haven can generate a token creature.

Last but not least, let’s get to the reanimation theme!  First up are ways to bring creatures back from the graveyard, such as Resurrection and its many variants. In particular, I just love Late to Dinner, which reanimates a creature and gives you a Food token; how hilarious is that flavor?  Pulsemage Advocate is Resurrection on a stick, but with a drawback that lets you play some politics with your opponents.

What about big expensive creatures you want to cheat out?  To my mind, the first choice would be Reya Dawnbringer, which lets you Resurrection each upkeep!  But there are a lot of great choices in Azorius, such as Zetalpa, Primal Dawn and Sphinx of the Second Sun. Desolation Twin is another good choice, bring twenty power across two bodies to the table.

Azorius also has ways to reanimate artifacts, which might also be relevant if we’re leaning hard in that direction. Refurbish is pretty much a Resurrection for artifacts.  Dance of the Manse can potentially get back a bunch of smaller artifacts. Tameshi, Reality Architect is a new Moonfolk that can bring back an artifact (or enchantment) at the cost of bringing a land you control back to your hand. Sword of the Meek is a weird inclusion here, but it can be discarded to Shorikai and then comes back from the 1/1 token that’s created.

So, what other big artifacts should we consider getting back?  Myr Battlesphere and Meteor Golem seem like solid choices that can also be reanimated with cards like Resurrection. But what about Spine of Ish Sah?  Seven mana can be a little pricey earlier in the game, but if you can cheat it out and then it later gets destroyed, it will come right back to your hand to use again. I also really like Kaldra Compleat as a living weapon that’s quite a collection of potent abilities.

What do you think?  What direct would you go with Shorikai, Genesis Engine?