Like you, I’m excited about building decks from the new Strixhaven: School of Mages and Commander 2021 commanders.  I can’t wait to finish assembling last week’s Hofri Ghostforge build and try it out on the Commander RC Twitch stream.

My next target was Breena, the Demagogue. 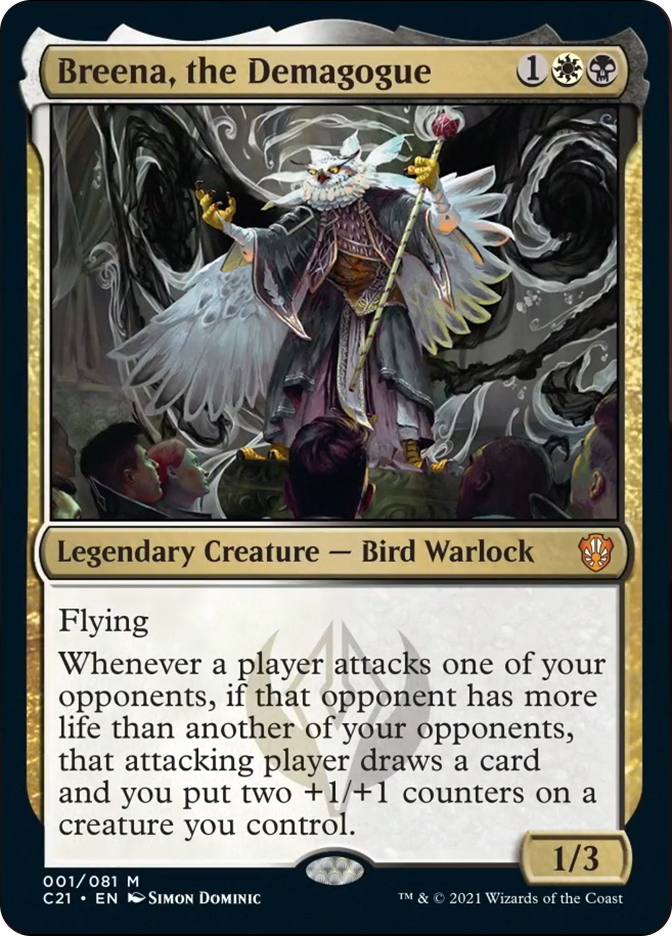 Here was my problem: I was the original architect of the Silverquill deck in Commander 2021 vision design.  While the finished product bears only some similarity to how it began (which always happens between vision and play design), it still maintains the general feel of that initial build.  I felt that left to my own devices, what I would come up with would be remarkably similar to the preconstructed deck.  So how was I going to get outside of my own brain for this project?

It occurred to me that there are plenty of other good Magic minds out there who I could tap into.  My first thought was to friend of the show and Tech Support to the Stars Logan Isch, who builds compelling decks at a power level I enjoy.  I asked if he’d enjoy the challenge, and he jumped at the opportunity.  I’ll show you the list and offer my commentary, but first, here are some of Logan’s thoughts:

When Sheldon approached me to make a deck list based on Breena, I knew I had to think out of the box. It’s all too often that a given commander is built the way most people expect it to be built. For this list, I took cues from one of my favorite commanders: Bruna, Light of Alabaster. To me, one of the most “outside of the box” concepts was turning this little 1/3 bird warlock into a powerhouse. Breena’s static ability already allows you to start stacking her with +1/+1 counters, so the addition of a stacked enchantress package full of auras will allow us to hit our opponents hard.

I aimed to use plenty of cards from the most recent sets for this build. Inkshield, Nils, Discipline Enforcer, Cunning Rhetoric, and Promise of Loyalty all provide great defense from attacks. Ardenn, Intrepid Archaeologist and Halvar, God of Battle set up for heavy hits. Court of Grace gives us some additional card draw and fills our battlefield with potential threats that also supplement Angelic Exaltation. Archaeomancer’s Map is a wonderful new friend to Land Tax, making sure we’re always keeping up with the ramp decks.

Another goal was to make sure 40% of the deck was enchantment cards to supplement enchantment counts for Helm of the Gods, Ethereal Armor, All That Glitters, and Sphere of Safety. Part of this enchantment package includes powerful, but not oppressive, enchantments that protect me from attacks. I wanted to aim more toward the “Don’t touch me” theme by using cards like Ghostly Prison, Marchesa’s Decree, No Mercy, and Revenge of Ravens. These cards, along with Breena’s ability and a few similar effects, all incentivize players to attack each other. With all the protection pieces in place, I’d be free to build up my commander for one-hit-kills.

Finally, I wanted to make sure the deck was resilient enough to come back from removal. Using card draw mechanics via Kor Spiritdancer, Mesa Enchantress, Sage’s Reverie, and being the monarch, we can make sure our hand isn’t empty. Other cards, such as Replenish, Starfield of Nyx, and Retether, let us rebuild the board in case of mass destruction.

I had a lot of fun coming up with this list. It was extremely hard to cut down to 100, as I initially started with a list of 160+ cards. My experience with both Bruna and our cold buddy, Daxos the Returned, gave me so many ideas to include.

What Logan’s done here is exactly what I had hoped for:  put together an interesting deck that I will enjoy playing but never would have come up with myself.  I’m not sure why I’ve never put together an enchantress deck, but it’s probably because it’s a classic archetype and these days I’m primarily concerned with exploring themes suggested by the latest commanders.

That said, this looks fun to play.  The plan seems pretty simple: jam Breena, make opponents attack each other, and eventually get commander damage kills.  The remainder of the creatures are in service to Breena or keeping us from getting attacked.  Orzhov Advokist is a card that fellow Commander Rules Committee (RC) member Scott Larabee has been playing lately, and it’s led to some compelling games.  Nils, Discipline Enforcer leverages the fact that there are lots of creatures popular in Commander which employ counters.  While Nils gives out +1/+1 counters, any type of counters apply to taxing attacks, whether that’s -1/-1, keyword soup counters (flying, first strike, trample, and so on), age counters, or even animated planeswalkers.

Even though there aren’t that many other creatures, I’m a fan of what each one does.  Bastion Protector does just what its name says, while making Breena even larger. Kor Spiritdancer is most often just an additional Mesa Enchantress, but getting +2/+2 for each Aura attached to it means that it can serve offensively in a pinch.  Heliod gives Breena vigilance while also making creatures for protection—and since they’re enchantment creatures, they apply for Helm of the Gods, Sphere of Safety, Ethereal Armor, and Serra’s Sanctum.

Halvar, God of Battle will be situational.  Most of the time, we’ll want to use its front face to provide Breena with double strike and bigger hits.  The ability to move Auras or Equipment is less likely to happen in this deck, since we’re mostly all in on Breena.  The back face, the equipment Sword of the Realms, provides something very important in an interaction-heavy environment:  if Breena is equipped with this when she dies, you put her back into your hand, thereby avoiding paying commander tax to recast her.

There’s a really techy use for Ardenn, Intrepid Archaeologist.  As with Halvar, there won’t be too much movement of Auras and Equipment, since they’ll already be attached to Breena (save for the first time we cast them).  The part about Ardenn that makes me happy is that we can move Curse of Disturbance or Curse of Vitality to a different player if we want, an option we don’t often get with Curses.  For example, if a player we’ve enchanted is about to get knocked out of the game, we can move the Curse via Ardenn.  The Curse then won’t go away when that original player gets knocked out of the game (see rule 303.4c).

There are so many enchantments in the deck, we can’t really discuss them all.  I’ll pick out a few favorites.  The first pair is Court of Grace and Marchesa’s Decree.  They introduce monarch into the game.  Logan mentions it as card draw, and that’s certainly the likely case with this deck since there are other incentives to not attack us, like the triggers on Marchesa’s Decree and Revenge of Ravens.  I have an additional, more general thought about the mechanic. I consider it damage prevention.  You bring monarch into the game, let someone take it away from you, and unless there are really good reasons, don’t try to get it back.  Simply let the other players battle over it; while they do, they’re not attacking you.  I wouldn’t have minded also seeing Court of Ambition on the list.

Flickerform is a thought-provoking choice.  One of the recurring issues with Auras over equipment is that if the creature dies, the Auras go away, too.  Flickerform’s activation will solve that problem.  The only caveat here is that you can get really blown out.  The activation sets up an end of turn trigger, which can be Stifled.  If it is, Breena and the auras will be stuck in exile forever.  In the environment I normally play in, Stifle isn’t all that likely, so things should be pretty safe.

While goad is more of a red mechanic, I’m happy we have it in black with Parasitic Impetus.  If our opponents are interested in helping us out, they’ll chump block the creature so that it has to keep attacking and draining away life from its controller.  If they’re not, it can go onto something with evasion that’ll make their lives more difficult.

As a fan of Mythic Bant back in the day, I was thrilled to see Eldrazi Conscription on the list.  Sure, it’s expensive, but it can turn a Breena that’s been active for a turn or two into a one-shot killer.  If it happens to get nuked, it can always come back with Replenish or Retether.

I’m thoroughly happy seeing Debtors’ Knell, a card that was house in the early days of the format but has fallen somewhat out of favor over the years.  Back then, the environment was less rich for enchantment removal, so it got held back for things like Debtors’ Knell.  Now, there are so many good targets that you stand a better chance of actually getting some use out of it.  In this deck, we might actually be getting more of other players’ creatures out of the graveyard instead of our own.

If Winds of Rath isn’t the deck’s hidden gem, then Reconnaissance is.  Our friends over at EDHRec tell us that it’s only played in 2% of decks.  It’s an inexpensive way to give your creatures pseudo-vigilance, by untapping them during the end of combat step.  If you need, you can also save your attacking creature from someone else’s combat trick.  What’s cool in this deck is that you can attack with Breena into an unfavorable combat, get the trigger, then pull her back out.

I’m also a fan of Cunning Rhetoric.  In some situations, just leaving the card exiled might be the best move.  Mostly, it’s going to keep annoying little chip damage creatures from heading your way, instead motivating players to attack elsewhere.

The last enchantment I’ll point out is Lightmine Field.  I’m head over heels about this card in general, even moreso in this deck.  Most of the time, Breena will be our only attacker, and she can handle the one damage.  The inclusion of Lightmine Field makes me wonder if Angel’s Trumpet would also be a good addition, really forcing people to attack.

The final two cards that make me thoroughly happy are two that I had a hand in designing, Inkshield and Promise of Loyalty.  While Inkshield is way bigger and swingier than my original take, Promise of Loyalty is nearly exactly as designed—the mana cost going from 3WW to 4W.  Inkshield is a card that’s going to create some wild situations in Commander games.  What’s going to be challenging with the card is not waiting too long to use it.  While you might want to wait for that big swing, even preventing eight or ten damage is going to give you a pretty good Inkling army.

Logan definitely exceeded himself when he built this deck for me.  Many thanks to him for taking up the challenge. He’s provided me with a build that will play extremely well at my preferred power level and create some memorable games for both myself and the rest of the table.  That’s all I could ever ask.