I was resigned to writing an unexciting column this week after the first six SCG Tour Online Satellites were in the books. Sure, the metagame is balanced and interesting, and individual card choices matter a bunch. I had plenty to discuss, just no game-changing new archetypes, and honestly, I see the highlighting of breakout decks as integral to the core mission of this column.

Perpetual ladder topper Aleksander K (aka Mystmin) arrived to Satellite #7 with a deck that I would have sworn was just a combination of cards they happened to have on them… except this is digital Magic, which means everything here is a purposeful choice. One Woe Strider. Two maindeck Baneslayer Angels. Four Doomskars. All purposeful choices. Why? I mean, I can take some wild stabs in the dark, I guess.

Broadly, this deck is set up very well against creature decks, with maybe just enough disruption to allow it to steal a game from anyone trying to reach an oversized late-game. Since the vast majority is the former and not the latter, it’s probably a fine moment to take a shot at this journey back in time.

It’s real, honest-to-goodness 2010 midrange, and I am here for it. Note, “here for it” does not equal “I’m playing this.” In fact, you couldn’t get me to register this deck in a tournament if you paid my entry fee. But I am glad that someone is out there doing it and is so good that they’re having success at the same time.

Okay, y’all are messing with me now, right? This deck is sort of up to the same tricks as Mystmin’s but is giving up a smidge of consistency to tap into some powerful red options. We talked a bit last week about how good Cinderclasm is, and I support efforts to work that card into more shells. Meanwhile, Bonecrusher Giant means that you can actually win some of those games where you need to put on a fast clock instead of theoretically winning a few. 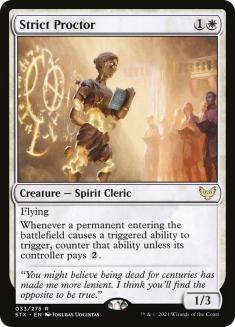 The card that really stands out to me here is Strict Proctor. I’m not sure it’s a total format KO, but there’s some really powerful stuff that Strict Proctor is slowing down right now. Tops on that list off the top of my head are Elite Spellbinder, Esika’s Chariot, and Embercleave. Those cards are all big players in the format right now, and it feels like this deck is the nightmare matchup for Winota, Joiner of Forces pilots. The bad news is that Winota fell off a bit in representation this week, but if this deck plays strongly against Gruul Adventures as well, it’s carving out a little niche for itself.

Finally, someone is ready to pull the trigger on Ugin, the Spirit Dragon, and it’s not who I expected at all. Half was always going to win my praise by being one of the first reasonable humans to actual register some Orcus, Prince of Undeath in their 75, but the fact that they also did it in an archetype I love and added the Ugin cherry on top means that Half wins the MVP award for this week’s column.

Wait, do we do that here? I guess we do now. Make sure to message @CedricAPhillips on Twitter and demand he send you an MVP trophy, personally vaccinate everyone who’s ruining this for the rest of us, and restart the SCG Tour come 2022. It’s the least he can do.

Seriously though, I’ve been wondering when Ugin was going to show his snappy little face. I think the raw speed of Naya Winota and Gruul Adventures has made it a challenge to survive until the point that Ugin can actually matter, but Half wisely spends their early-game creating a battlefield of their own, and Kalain, Reclusive Painter; Goldspan Dragon; and Shambling Ghast are great at playing a two-way game of battlefield presence and simultaneous ramp.

Mark my words, there is something to this archetype. Even if we have to wait until rotation, Rakdos Treasures is eventually going to shine.

Mono-Black Control. What a time to be alive.

Again, we see a spreading awareness that Ugin simply lines up well against what is good in the metagame right now. Sure this deck is a little slower in getting there, but a hard focus on disruption, hammers from the sideboard in Necromentia and Weathered Runestone, and the ability to draw a little proactivity out of the criminally underplayed Nighthawk Scavenger all combined to allow Fabio Aramini to put up a nice little finish. Decks like this succeeding are a clear indication that the format has played itself to a point of balance and health.

Calling this Boros Aggro might be a bit of a misnomer. Really, it’s an adaptation of the Mono-White Aggro decks from earlier in the format, with a pinch of powerful red removal thrown in. This makes sense to me. The staying power of Faceless Haven is less necessary with both the decrease in control and the adequate replacements of Cave of the Frost Dragon and Den of the Bugbear.

Ideally, I’d want to see this deck commit to more of a specific identity in Game 1s. It’s trying to have a little bit of game against everything possible and sometimes that leaves you with a worse win percentage overall. I’d back off a bit from some of the more defensive elements like Lurrus of the Dream-Den and Showdown of the Skalds and commit to disrupting your opponents and getting them dead. The white aggressive creatures are too good to be left out of Standard’s scrum, and I’m happy to see Tim Schmeltz tinkering with the formula a bit to get them back in the mix.

Finally, Brandon Gamelin fills out my Bingo card this week by finding yet another color pairing to mix into something resembling Atelier’s Dimir Control (Yorion) deck. Tune in next week when we find out what Lochmere Serpent and Kaervek, the Spiteful can do when Pokemon’s Grass Energy is added to the manabase.

Much of the space that the decks debuting this week swooped in to occupy only existed because of the decreased influence exerted by Sultai Ramp (Yorion) on Friday and Saturday’s events. There were just not as many people showing up with last format’s boogeyman, and when they did choose to sleeve up 80 cards, results were generally poor.

So, what did that mean for Sunday’s $5K SCG Tour Online Championship Qualifier? I expect you already know the answer.

Alexander was not lonely in the Top 4, as three of the four top slots were occupied by Sultai Ramp (Yorion), despite there being only fifteen Sultai decks registered in the tournament. That’s an absurd conversion rate, and it points to a very obvious conclusion. If you think you can get away with disrespecting Sultai Ramp (Yorion) come Sunday’s competition, you’re dead wrong. There’s a talented group of players with a strong predilection for the archetype, and the moment the format tried to focus on the creature-centric approaches of Naya Winota and Gruul Adventures, Sultai Ramp (Yorion) was ready to kick down the door.

Stay humble, brewers. Some spicy-looking decks occupied the column this week, but it’s going to take more respect of Sultai Ramp (Yorion) for these new contenders to become format fixtures. Otherwise, expect Sultai Sundays™ to remain a thing right up until rotation.