Kamigawa: Neon Dynasty preview season has been a blast, and it’s clear that all the design teams at Wizards of the Coast (WotC) were firing on all cylinders when pulling together this set.  It’s beautiful, exciting, and super-cool, and to my mind succeeded in bridging the gap between the past traditions of the previous block with the cyberpunk future of the new set into a cohesive and enticing whole. I am chomping at the bit to get my hands on so many of the new cards, including a whole host of new legendary creatures to build Commander decks around.  At the top of the list?  Quite simply one of the most interesting legends to come around in a while, Tatsunari, Toad Rider! 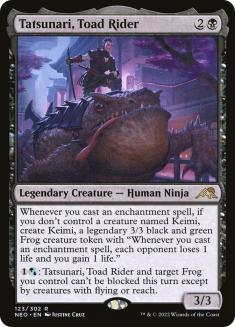 Tatsunari is a Ninja without ninjutsu, which definitely made it jump out. The last time we were in Kamigawa, all the Ninjas had ninjutsu, though there were a couple of Ninjas in Modern Horizons that did not. Nothing about the card other than the creature type suggests that you should include Ninjas, other than the fact that Tatsunari has a built-in evasive ability that can help ensure something you bring in with ninjutsu will connect with your opponent.

Instead, Tatsunari suggests that you play a lot of enchantments so you can reliably summon Keimi, a legendary 3/3 black and green Frog creature.  Keimi also has an ability that triggers from casting enchantments, which drains each opponent for one life and gains you a life.

Tatsunari’s activated ability lets you make your commander and target Frog unblockable this turn except by creatures with flying or reach. Of course, that Frog is usually going to be Keimi, but if you have other Frog creatures on the battlefield and enough mana, you can lead an army of Frogs to assault your opponents’ life totals.

What’s so exciting about Tatsunari is that you have so many different options to go in: you’re going to play heavy enchantments, but what sort of enchantments—Auras that come back to your hand when creatures die? Bestow creatures? Enchantment-based removal or utility?

Do we want to lean heavily into Frog tribal now that we have a deck we can play both The Gitrog Monster and Grolnok, the Omnivore in the same deck? Do we want to play heavy into Ninjas with Tatsunari and bring in the green Ninjas from Kamigawa: Neon Dynasty?  Or do we want to tap into creatures with changeling that can tie the two tribes together? And what about the life drain/gain aspect of it? How can we leverage that?

As I compiled cards that play well with Tatsunari, I quickly realized there were more than twice as many cards as you could possibly put into one deck, which tells me that each person’s Tatsunari deck will have a lot of variability and customizations, which I think is awesome!

The first cards I started researching were those that would benefit from us having an evasive commander, Frog friend, and trigger from combat damage to an opponent, so Equipment like Sword of Fire and Ice should be considered. But even better are enchantments like Reconnaissance Mission and Snake Umbra, since they can help you create Keimi and drain life. I also really like cards like Ohran Frostfang that can turn combat damage into card draw; Frostfang is particularly nice since the deathtouch it gives makes opponents reluctant to block attackers, which plays well with ninjutsu.

Enchantments That Return to Hand

Next, I went looking for enchantments that return to your hand so that you can ensure you can cast an enchantment every turn without running out of cards. Broken Fall and Molting Skin are nice in that they can prevent a target creature from dying to a destroy effect—and not just your own creature, so you can use them politically to gain favor.

Auras That Return to Hand

I also really like Auras that return to your hand if they go to the graveyard from the battlefield, either from the creature dying or some effect that destroys or makes you sacrifice the enchantment. Aspect of Mongoose is an interesting choice to enchant your commander since Tatsunari’s ability doesn’t target itself, so it still works even with shroud.

Whip Silk and Shimmering Wings are nice in the late-game since you can cast, return to hand, and recast multiple times in a turn to get multiple life drains on your opponents that could help close out a game, or keep you alive one more turn.

Another angle would be using enchantments as creature control, such as Imprisoned in the Moon and Song of the Dryads, Kenrith’s Transformation and Kasmina’s Transmutation, with Song of Serenity for the coup de grace.

I kind of like the flexibility of Awakened Awareness—you can cast it early for just two blue mana and turn the biggest threat on the battlefield into a 1/1 creature.  Late-game, with a bunch of mana available, you can use it to potentially buff one of your smaller creatures – a Frog or Ninja, mayhap? – into a true threat.

Bestow creatures are awesome because they offer up a way to add to your battlefield without overextending into a battlefield sweeper since they’ll change from Auras into enchantment creatures. Late-game, bestowing Nighthowler onto your commander can mean unblockable commander damage kills!

Kodama of the West Tree is an exciting new card that will play nicely in a deck with a fair number of Auras and creatures with bestow since they count as being modified! Cards like Necromancer’s Magemark gives additional benefit to all enchanted creatures you control. Inspire Awe is a little expensive for a Fog effect, but it definitely has a lot of upside for a deck with a lot of enchantment creatures and Auras.

Green has no end of good cards that care about enchantments, and the ones that are also enchantments like Sanctum Weaver and Enchantress’s Presence really do extra work in this deck. I also really like Enigmatic Incarnation in the deck to go get our special Frog or Ninja creatures, especially if we’re running cards like Rancor and Glistening Oil that can be easily sacrificed and brought back to your hand.

Constellation is really where the rubber hits the road in an enchantment-heavy deck, giving you lots of incremental value in addition to what our commander gives us.  I really like how Doomwake Giant can clean up pesky 1/1 tokens that might otherwise threaten to overwhelm us. Late-game, Strength from the Fallen can boost your unblockable commander to a lethal size, especially in conjunction with Nylea’s Colossus!

Even after covering creatures with bestow and constellation, there are still tons of enchantment creatures we can play to increase our density of enchantments. I’m a big fan of Destiny Spinner to take the bite out of opposing counterspells, but its activated ability can be a genuine threat in this deck. Perplexing Chimera is a fun creature that can protect you from certain spells that might otherwise wreck your plans.

Kamigawa: Neon Dynasty brings a new variety of enchantments, those that are on the back of the new double-faced Saga enchantment cards that transform on the last chapter into enchantment creatures. Not all of them have effects that really fit into what this deck wants to do, but some of them offer generic value that we may want to add to the mix.

For most green decks I advocate for using the land ramp sorcery spells to ramp and fix your mana, but to continue on the enchantment theme, why not tap into all the green Aura spells that can enchant lands and provide your ramp and sometimes color fixing?  Also, something like Bower Passage can help Tatsunari’s activated ability be more reliable against flyers.

How viable is Frog tribal?  Well, there are technically 30 Frog cards in the Sultai color combination, but quality of cards on the list drops off quite steeply after the ones I’ve listed. What’s nice though is that we don’t have to go full Frog tribal to still benefit from Tatsunari’s activated ability—who wouldn’t want to make The Gitrog Monster, Froghemoth, or Yargle, Glutton of Urborg unblockable?

There are more than 40 Ninjas in the Sultai combination, so we can certainly go full-blown Ninja tribal if we want to, including the new green Ninjas from Kamigawa: Neon Dynasty like Kappa Tech-Wrecker and Coiling Stalker. The Ninjas I list above are cards that I think warrant a place in the deck, even if we’re not leaning full-on into tribal, because they provide additional combat damage benefit for our unblockable Ninja commander, like Ingenious Infiltrator and Throatseeker. Cunning Evasion is also a nifty enchantment to have in a Ninja deck with ninjutsu.

To fill out the tribal theme of Frogs or Ninjas, we can tap into the numerous quality creatures with changeling like Realmwalker and Chameleon Colossus. Or we could even make all of our creatures Ninjas and Frogs with Maskwood Nexus!

Let’s not forget about the enchantment life drain ability of Keimi!  The Witherbloom school from Strixhaven: School of Mages and the Commander 2021 decks boost the life drain/gain themes that black already does really well with cards like Dina, Soul Steeper and Blossoming Bogbeast. If you want a combo finish to your Commander games, you can include Sanguine Bond and Exquisite Blood.

Without white, we’ve got to reach a little deeper to find ways to bring back enchantments from the graveyard with cards like Crystal Chimes and Dowsing Shaman. I also recently had my mind blown by someone suggesting enchanting Magus of the Will with Kaya’s Ghostform, which potentially lets you reuse Magus of the Will!

So, what do you think of Tatsunari, Toad Rider? Is there anything you would play with it that I didn’t mention above?