Modern Horizons 2 has been fully previewed and it’s stuffed full of fantastic cards that Commander fans are going to love. I’ve got a bunch of cards on preorder and cannot wait to get them through the mail and slotted directly into my decks.  I’ve got a lot of decks and I’m constantly tinkering with them, trying out new cards to see how they change things up.

One of the archetypes for Modern Horizons 2 Limited is Gruul Storm, and to support that there are a bunch of neat new storm and storm-enabling cards.  One of the coolest of this new batch is the card I wanted to do a deep dive on today:  Aeve, Progenitor Ooze! 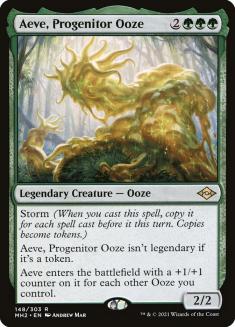 WotC has been pumping out some cool Ooze cards lately, and we’re getting pretty close to rounding out a pretty nifty Ooze tribal deck.  Aeve does a neat job of keeping a foot (or a tentacle?) in both the Ooze and the storm camp.  You could build your deck to fully embrace either side and ignore the other, but I think the best and more fun approach is to straddle both sides, which gives it a different playstyle than a typical tribal deck.

Aeve has the distinction of being the only creature spell with storm, and since it’s a legendary creature it needs that extra text there that any token copies of Aeve, Progenitor Ooze aren’t legendary, much like the tokens that are made by Helm of the Host.

I really love that last paragraph in the text box: “Aeve enters the battlefield with a +1/+1 counter on it for each other Ooze you control.”  It’s what really lets Aeve live in both worlds — you can boost Aeve for any Ooze’s you’ve already played before casting Aeve, and if you’ve stormed off Aeve and storm copies of Aeve will help each other out with +1/+1 counters.

Alright, so let’s dig in!

There are a surprising number of good Ooze cards these days!  I particularly love Biogenic Ooze and Biowaste Blob as nice Ooze tribal support; and speaking of tribal support, Herald’s Horn and Urza’s Incubator are particularly great in this deck for their ability to discount Ooze spells, which can potentially let you cast several in a turn to build up your storm count.

To round out our Ooze tribe we can dip into creatures with changeling, and thanks to the first Modern Horizons and Kaldheim we’ve got a bunch of them available even we’re monogreen.  The cheaper changeling creatures are going to be nice to ensure you’re able to play out several Ooze cards so when Aeve enters the battlefield it and any copies it makes can benefit from extra +1/+1 counters.  Maskwood Nexus is particularly good if you’re not 100% on the Ooze tribal train and can make little 2/2 “Ooze” tokens to pave the way for Aeve to be cast.

If you’re leaning into ways to storm off with Aeve, you should definitely consider ways to make even more copies of Aeve. Doubling Season is an expensive card, but its price is justified because it does so much, and in this case it will both double the copies of Aeve from storm and it will also double the number of +1/+1 counters that get put on Aeve and copies. There are cheaper options like Parallel Lives, Primal Vigor and Second Harvest that do fun things too.  Keep in mind that any additional copies of Aeve tokens you make after it’s already on the battlefield — say with proliferate from Druid’s Deliverance — will end up even bigger!

Okay, now let’s get fully into the “storm off” part of the article!

One way to help ensure a nice storm count when you cast Aeve is to have a bunch of zero-mana cards that you can just hold onto and then cast in a flurry of spells before casting Aeve.  A lot of these are high-dollar cards — Jeweled Lotus, Mana Crypt, Mox Diamond — but there are plenty of other ones you can play that are much cheaper like Welding Jar, Bone Saw, Accorder’s Shield, and Tormod’s Crypt. Sol Ring and Mana Vault are also cards you can hold off playing until your big storm turn since they tap for more mana than their mana cost.

Cards with suspend are another way to increase your storm count if you time them correctly, and if you want a little extra control over your suspend cards you can run Jhoira’s Timebug.  Modern Horizons 2 gives us even more suspend options with Rift Sower, Sol Talisman, and Gaea’s Will.

Another way to help set up a big storm turn is to play cards that discount spells you cast, with Emerald Medallion being a good example of these. I’ve been super-impressed with Ezzaroot Channeler, a new card from Commander 2021 that discounts creature spells you cast by the amount of life you’ve gained this turn. It’s a Treefolk Druid so it’s outside the Ooze tribe but it could be worth it if you’ve got a few other ways to gain life in the deck.

Another way to help enable a big storm turn is to make sure you have a lot of mana to chain a bunch a spells together and lucky for Aeve it’s in the right color for such shenanigans! From doubling your mana with Nissa, Who Shakes the World, Mana Reflection, and Zendikar Resurgent to tripling your mana with Nyxbloom Ancient, enabling that big turn should be relatively easy.  Don’t sleep on Frontier Siege too, which can give you four extra green mana during your turn (with a combat step in between).

The final piece of the big storm turn puzzle is card draw to help ensure you have plenty of cards to go off with, and lucky for Aeve green has plenty of ways to make that happen. Cards like Glimpse of Nature and Beast Whisperer draw you a card each time you play a creature spell, so you can potentially chain a bunch of creature spells before casting Aeve. Sylvan Anthem’s scry ability can help supplement that by pushing cards to the bottom of your library that you don’t want to draw during your big turn.

Another way to help enable a big storm turn is to play cards that you can cast for no mana or enable you to cast other spells for no mana.  Old school cards like Refreshing Rain and Land Grant can be cast for no mana, and Noxious Revival can be cast for two life instead of one mana. Geode Golem is super-fun because, assuming it deals combat damage to a player, it will let you skip Aeve’s mana cost, so you can use that mana for other spells to boost your storm count. In Search of Greatness continues to impress me—the scry ability is always helpful and occasionally getting to cast spells from your hand for free is great way to have big turns. 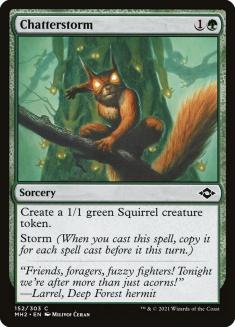 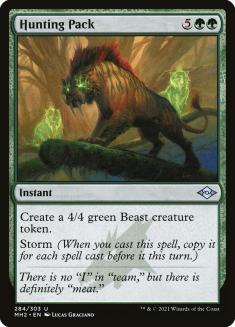 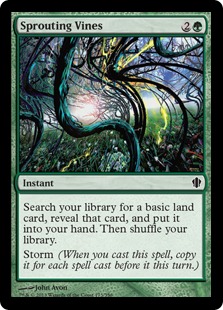 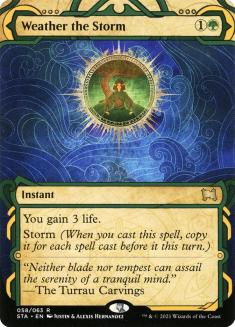 Lastly, if we’ve set our deck up to storm off with Aeve, why not have some other storm cards too?  That way even if Aeve isn’t available due to an unfortunate encounter with Imprisoned in the Moon or Oubliette, you can still storm off and get some fun effects — lots of 1/1 Squirrels, or 4/4 Beasts, or search up a bunch of basic lands, or gain three life a bunch of times (which Ezzaroot Channeler always appreciates).

I initially thought it would be nice to include creatures with magecraft from Strixhaven since that ability works nicely with storm, but then I realized that Aeve is the one storm card that isn’t an instant or sorcery, so it does not synergize with magecraft.  Ah well, that’s okay — we can always fill out our deck with Ooze cards, right?

What do you think?  Are there any other cards you think would play great alongside Aeve, Progenitor Ooze?  And if there are any new legends from Modern Horizons 2 that you’d like me to do another deep dive on, please let me know!