Even though I grew up playing control decks and largely learned how to play Magic at a reasonable level thanks to them, they haven’t appealed to me in quite some time. Therefore, whenever I recommend a control deck, you should take notice. It takes something truly special to get my attention and this deck is exactly that.

There’s a ton to like here and also much to unpack.

Regardless, I’m sure this decklist (and my article) make Bryan Gottlieb very happy, as he was an early proponent of Lier, Disciple of the Drowned. Buying time with Fading Hope is already a popular strategy in Standard given the texture of the format and the end-games available, plus it can protect your Lier.

Not being able to utilize counterspells in Dimir Control might seem awkward, but Bryan was also quick to identify the synergy between Lier and Divide by Zero. While not a true counterspell, Divide by Zero allows you to interact on the stack while still working with the rest of your deck. In the late-game, a Lier with a graveyard full of Divide by Zeros will make you feel untouchable. That combination of cards is what makes the deck fully operational.

Once the Magic World Championship XXVII decklists were out, I started toying with merging Ondrej Strasky’s decklist with the Grixis Epiphany decks to very strong results. The one point of contention was that Alrund’s Epiphany didn’t play well with Lier itself. Both were clunky end-games and neither had much to do with each other. Given the rise of aggro, Danny’s decklist starts looking more appealing, even if it may need a little massaging.

At the end of the day, I’ve made four drastic changes.

Danny was clearly trying very hard to have game against Izzet Epiphany in Game 1. I understand the desire to do so, especially when his tournament took place while Magic World Championship XXVII was still ongoing. Since then, we’ve seen a resurgence of Goldspan Dragon decks and Mono-White Aggro❄ and I expect that to carry through into the Arena Open this weekend.

You can usually beat Mono-Green Aggro❄ with a pile of spot removal, but you can’t say the same for Mono-White Aggro❄. They’re too lean and will get under you quickly. Typically, you’ll need a sweeper to be able to keep up. Shadows’ Verdict is the cleanest option against Mono-Green, but sometimes too slow against Mono-White. We have Crippling Fear as an option, which isn’t ideal as both decks have creatures with four toughness. However, we can save a spot removal spell for the larger creatures to make it work.

I also kept adding mana sources until the deck felt smooth. Since Lier is so mana-hungry, you want to make a land drop every turn. The extra card drawing helps facilitate that, so I could see having extra copies of Consider as well. They smooth your draws early and give you something to do with Lier when your opponent has an empty battlefield.

And Xanathar, Guild Kingpin? No, thank you. 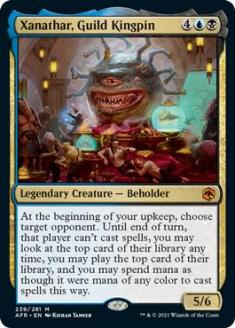 In addition to it lining up poorly against Fading Hope and Divide by Zero (and everything else), you don’t explicitly need a win condition. This is a deck that’s quite good at fully locking up a game, which we haven’t seen from a control in a long time.

With all that in mind, here’s my updated decklist.

My version is hedging after recent metagame shifts. As I mentioned, Danny’s original decklist was targeting Izzet Epiphany hard, which was correct at the time. With more aggro decks in the field, we can’t afford to build our deck that way, especially since it means there will be fewer Izzet Epiphany decks overall. My decklist isn’t truly great against Izzet Epiphany or Mono-White Aggro❄ in Game 1, but is stronger against both overall.

All this deck wants to do is empty its hand and cast Lier. To that end, we might be better served playing all four copies. Then again, they aren’t good in multiples and you don’t necessarily want to cast Lier on Turn 5, so I basically have a Behold the Multiverse in its place. With all the cycling, you’re usually able to find a Lier in time.

Power Word Kill isn’t acceptable in a world where Izzet Dragons just won the biggest Magic tournament of the year. Despite Infernal Grasp being the best spot removal spell, we can’t overlord on them. Cards like Bloodchief’s Thirst, Flunk, and Soul Shatter can provide secondary options while also not killing you. 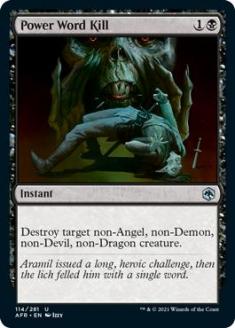 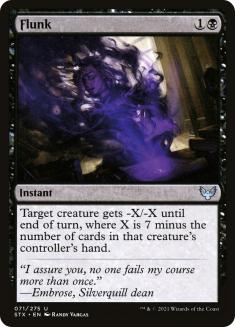 Honestly, I wish Flunk lined up slightly better against the format. Sadly, there are too many four-toughness creatures and decks that don’t empty their hands quickly for it to be a clean answer to everything. When you’re killing a two-drop, killing something on Turn 10, or after a flurry of discard spells, it feels great. I tried extra copies and it was ineffective in too many spots.

In order to beat Izzet Epiphany, you need to constrict their resources. Go Blank is perfect for that because it also invalidates the flashback from Memory Deluge and Galvanic Iteration. Danny’s deck was basically pre-sideboarded against Izzet Epiphany, but I expect that deck to wane in popularity following Magic World Championship XXVII.

Even though it has applications against other Hall of Storm Giants decks, Field of Ruin is mostly for aggro decks. Faceless Haven is a massive problem, even with Fading Hope and the like. It’s also yet another reason to stay away from Power Word Kill.

My sideboard is trying to keep the amount of Lessons to a minimum. I’m playing the same three as Danny, but I could see ditching Mascot Exhibition altogether. You don’t explicitly need it to win games, but it’s comfy. If you’re digging with The Celestus, having an extra piece of cardboard to fetch can be helpful, so having enough Lessons to ensure you don’t run out of them makes sense.

From there, I want to solidify the Izzet Epiphany and Mono-White Aggro❄ matchups. Malevolent Hermit can be awkward with Lier at times, but you need them to ensure they can’t copy an Alrund’s Epiphany and take multiple turns. Plus, it allows you to force through a Lier against an opposing counterspell and helps protect your engine from Test of Talents.

Filling out your suite of discard spells is important, as is having enough sweepers against Mono-White. After that, we have a couple additional spot removal spells. Thankfully, Standard mostly has decks that are weak to removal or discard, so we’re not stretched thin. We’re easily able to have access to everything we need, even with some Lessons taking up sideboard space.

Duress doesn’t have many targets, so it’s the first to go. Go Blank is similarly ineffective as it doesn’t affect the battlefield. Even with fewer discard spells, a leaner mana curve, and sweepers in the maindeck, it’s not a perfect matchup. However, after sideboarding the additional sweepers, you’ll be set up like a pure control deck that they aren’t prepared to defeat.

If you resolve a decent sweeper, it’s difficult for Dimir to lose. Getting one to resolve through Elite Spellbinder and Reidane, God of the Worthy can be tricky though.

Disruption is key to preventing them from copying Alrund’s Epiphany with Galvanic Iteration. They know that and will most likely have some sort of threat lurking in their sideboard that you’ll have to deal with.

I like keeping in a Bloodchief’s Thirst as a cheap way to kill Malevolent Hermit and Smoldering Egg. To some degree, Fading Hope can temper their effectiveness. However, Goldspan Dragon is a different issue entirely. At this point, I assume they’ll bring in however many reside in their sideboard, which means I also want to keep in a Soul Shatter.

Watch out for Test of Talents. Dimir has leverage against Izzet because of the spells it can recur with Lier, so the games are much different if you’re missing something like Go Blank or Divide by Zero. I’ve had plenty of situations where I couldn’t play around Test of Talents and had to sacrifice some portion of my deck, but I’ve been able to play through it.

I’m not sure if you can play more Crippling Fears than Shadows’ Verdicts and get away with it against Mono-Green Aggro❄. My decklist is built the way it is out of respect for Mono-White Aggro❄ and its increasing numbers, but if I’m underestimating Mono-Green’s presence in the metagame, that could prove fatal. That said, there are situations where you’re able to convert Crippling Fear into a sweeper with no downside.

Maybe this matchup is good enough that it doesn’t matter and I’m stressing over nothing. It certainly helps that they’ve cut down on Wrenn and Sevens, although maindeck Snakeskin Veils are scarier. Thankfully, Duress is a playable card against them because of them.

Overall, this is an intricate, fun, and difficult matchup. It’s not exactly a bad matchup, as long as you can stop them from gaining traction and keeping it. Focus on keeping their threats in check. Then worry about ensuring they can’t run away with the game thanks to their card advantage. After that, you can focus on actually winning the game.

Duress and Malevolent Hermit are important for protecting Lier, but they’re only good against one part of their deck. I don’t want to load up on Hermits because I usually only want to draw one per game.

As good as The Celestus is against basically everyone, it’s worth taking out against a deck with Prismari Command. Yuta Takahashi had one copy maindeck and another in the sideboard and I’d expect those numbers to rise before they fall.

Given the rocky start to this Standard format, it’s starting to shape up. Our options are mostly to play aggro or play Alrund’s Epiphany, but there’s also some fun stuff available. So far, Dimir Control has felt like the perfect option for a metagame-breaker. More importantly, it’s a delight to play.