With a metagame that’s growing increasingly hostile toward Izzet decks based around Alrund’s Epiphany, a window could be opening for other decks to be successful. Naturally, you’ll still have to go through numerous different green decks if you want to have a chance. The single card with the most individual chance for success is Blood on the Snow. 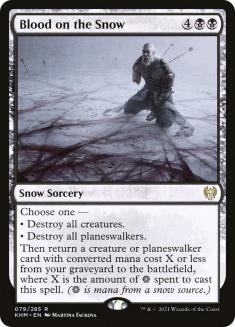 There will be a time when black midrange is well-positioned in Standard and Blood on the Snow will be the reason. Green decks aren’t particularly equipped to handle maindeck sweepers, especially when they also put something like Lolth, Spider Queen onto the battlefield. So, what do we do with Blood on the Snow? Most decks start with the Treasure synergies and build from there. 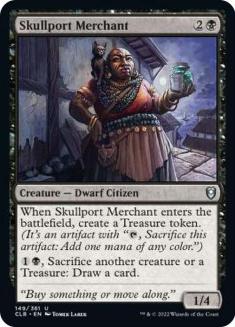 You use the combination of these cards to accelerate your mana while also stemming early aggression. Overall, it’s a tidy package that gives you things to do with your mana leading well into the late-game. Plus, the velocity means you’ll typically be able to find whatever you need for any given situation.

The Treasures accelerate to your sweeper a turn early, which is commonly needed against aggressive decks. Six mana tends to be slightly too expensive otherwise, especially when you’re on the draw.

Personally, I also started with Sedgemoor Witch, a card I’m none too fond of. It seemed like the deck could use a clock and something to return with Blood on the Snow. Plus, with cards like Deadly Dispute and cheap removal, it seemed like it wouldn’t be difficult to trigger repeatedly.

I was mostly right in my assessment, but the deck functioned just as well if you removed it entirely. Aside from providing a clock, Sedgemoor Witch didn’t change the dynamics of any matchup enough to warrant the slots.

My first iteration of the deck also contained Jadar, Ghoulcaller of Nephalia as a clock and consistent provider of sacrifice fodder. Similarly to Sedgemoor Witch, it provided sacrifice fodder for a deck that didn’t particularly need it. Ecstatic Awakener is another potentially useful clock.

Most of the time, you’ll win by grinding your opponent into dust. You’ll stave off early aggression with spot removal and blockers, eventually casting a sweeper. From there, you’ll only have a couple of threats that need to be cleaned up. Meanwhile, you’ll continually be drawing cards and winning through chip damage.

We’ve already seen Orzhov Control❄ put up some solid results, but the version most people are playing these days is mono-black, or at least close to it.

Will Pulliam recently took his version of the deck to a Top 32 finish in a Standard Challenge on Magic Online. Some of his innovations, like Disdainful Stroke in the sideboard and removal of Sedgemoor Witch entirely, are worthy of note.

The Meathook Massacre is solid in this archetype as another sweeper or a difficult-to-remove Blood Artist. Without Sedgemoor Witch and the like, it won’t be sacrificing massive amounts of creatures. Over a long enough stretch of turns, the damage will add up. Plus, the additional life from killing your opponent’s creatures will help keep your life total afloat, even when you’re using Lolth as a card drawing engine.

Similarly to Blood on the Snow, The Meathook Massacre is another sweeper that benefits greatly from the existence of Treasures. I’ve seen several games where a green deck is able to outsize The Meathook Massacre for the first six or seven turns, often rendering it close to useless. Being able to accelerate with Treasures mitigates that issue to some degree.

The saving grace for the poor Izzet matchup is that they’ve had to adapt to a hostile metagame, adding threats like Smoldering Egg and sometimes Goldspan Dragon into the mix. In order to do so, they’ve also cut back on sweepers and some of the scary late-game cards that make Alrund’s Epiphany so inevitable like Galvanic Iteration. If you can prevent them from gaining traction with their threats and have a well-timed piece of disruption for their Alrund’s Epiphany, their deck is much less scary.

Many of these decks will splash Valki, God of Lies or off-color Lessons, castable only off Treasures. Will did the necessary thing of adding Disdainful Stroke to the sideboard, hoping to catch Alrund’s Epiphany players off-guard. Duress is usually the go-to piece of interaction, but it doesn’t line up particularly well against Memory Deluge. Forcing your opponent to spend mana before you deal with their spell could easily translate into a win, especially if they aren’t expecting it to get countered.

Of course, a clock would still be appreciated. Skyclave Shade is solid, and I’d highly recommend playing it in the sideboard if you have the slots. Unfortunately, Will’s sideboard has six Lessons and an Island to facilitate his splash, so room is thin. You could pick up some slots by trimming some Lessons, playing the Island maindeck, and potentially even playing a Disdainful Stroke or two maindeck. Each of those decisions certainly carries their own consequences though. Playing Divide by Zero would give you some disruption for Izzet that wasn’t medium everywhere else.

This version of the deck incorporates many of the things I previously mentioned. If I were to play a Blood on the Snow deck, it would be something close to this since it should give you a better Izzet matchup. However, it’s weaker in many other matchups, so choose accordingly.

Binding the Old Gods solves a couple of problems but creates some of its own. Most threats in the format have some sort of immediate impact, which means you’re always playing from behind. You get a land out of the deal, which isn’t trivial, but it hasn’t felt like enough. It’s clunky but maybe still worth playing.

Adding a color will always come with costs. In the case of decks based on Blood on the Snow, it means you might not always be able to return a five-drop to the battlefield. In some versions, that might not be a deal-breaker, but the Golgari version is severely lacking in cheap, relevant cards to return outside of Skullport Merchant. Maybe that’s enough.

If you want more of a clock in Golgari, Briarbridge Tracker is a fine option.

Finally, we have a Rakdos version. Instead of trying to win a war of attrition with Lolth, it tries to end the game with Goldspan Dragon. With all the Treasure generation, you’re able to have some incredibly explosive turns. You also pick up some removal that doesn’t deal you damage and an additional threat in Immersturm Predator. In a world where Izzet has Fading Hope and/or Divide by Zero, the Goldspan Dragon plan doesn’t seem particularly viable. That said, it’s better than nothing.

Immersturm Predator is a card that is poised to break out in certain metagames. There are times where it’s absolutely unstoppable. From my experience, most archetypes incidentally have a clean answer, whether it’s Soul Shatter, Skyclave Apparition, Divide by Zero, or something similar. I don’t think there’s a card in Standard that has such a huge disparity in effectiveness. Another solid use of Treasures is ramping into Inferno of the Star Mounts, although it has the same issues as the other expensive Dragons.

Overall, these snow-based decks look great. This week might not be the time for them, but it wouldn’t surprise me if they start doing well in the near future. The black cards are phenomenal and the color is deep, so none of these decks feel like they’re short on playables. If there’s a problem that needs solving, the solution likely exists, either in-color or with a light splash.

And if Alrund’s Epiphany happens to catch a ban? Well, I know what my new favorite archetype is going to be.