The Core Set 2021 Limited environment is far from what we have seen in recent years. Many old-school players appear to love it due to the nostalgia factor. Old Limited formats are chock-full of bad commons. This doesn’t mean that the formats are worse, but rather decks always contain subpar cards for their respective plans. Games are scrappy because a seamless execution of a gameplan is rare. This is a different kind of Magic, one that many players enjoy. I don’t mind it, but there are aspects of this format that don’t lend itself well to that kind of design.

This is my least-favorite format I have ever drafted. Yes, this includes Avacyn Restored (although note that I did not play Magic competitively at that time). Because of that, I cannot justify playing it, and hence this will be my last article on Core Set 2021 Limited.

My relationship with Magic has ranged from very unhealthy to perfectly healthy. I can see playing this format feeling like work in a way that makes me less happy day-to-day, and so I’m taking a step away from Magic for a bit. However, I still want to learn from this experience and share my current findings on the format.

I have spent over twelve hours discussing my hatred and trying to understand it. In doing so, I believe I have some crucial observations that can help many succeed in this format. What follows will be a detailed observation of why I dislike the format, what those observations mean for how to succeed in the format, and some example picks to demonstrate strategic implications.

Dregs are defined as below-filler. These are cards that, when considering them in the abstract, the gut evaluation yields a please-don’t-be-in-my-starting-deck feeling. Often, these cards have synergistic qualities that can make them reasonable inclusions. Think about the card Imposing Vantasaur from Ikoria. In a deck that didn’t care at all about cycling, including one Vantasaur wouldn’t make much sense. However, in the cycling deck, Imposing Vantasaur is almost always correct to pick over Pacifism. This is an example of maximizing dregs — taking a common that isn’t a great card by itself and surrounding it with cards that maximize its potential. 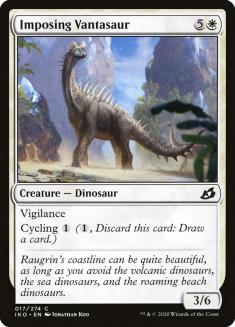 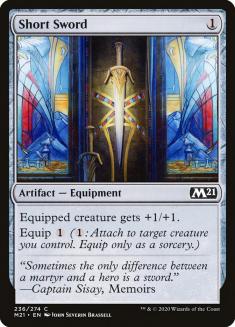 I believe that an overwhelming majority of commons in Core Set 2021 qualify as dregs. This is why it is so important to work towards maximizing the little synergies. Most decks will be composed of below-par cards, so building a deck that minimizes the detriments of casting too many below-par cards by ensuring these cards interact positively with each other is a great way to gain an edge in this format. Short Sword is the perfect example of a card that does this, and hence is much better than many think it is.

Most creatures in this format are small, like a 2/2 or a 3/3. This means that turning a 3/3 into a 4/4 is actually a significant upgrade, which isn’t the case in most formats. Short Sword turns all the mediocre dregs into reasonable creatures, and that’s enough to justify inclusion in this format. This isn’t to say that Short Sword and Imposing Vantasaur are the same. Short Sword will almost never be better than a good removal spell. This is because these synergistic interactions to maximize dregs in Core Set 2021 Limited are, for the most part, capped at above-filler.

One of my favorite parts about drafting is exercising agency to turn cards that wheel, like those one-mana cyclers, into some of the best cards in my deck. This is basically impossible in the current Draft format, and that is a large reason why I’m not enjoying it. In order to succeed, an exuberant amount of effort towards maximizing dregs is necessary. However, even with that effort, the value of dregs post-maximization will still be worth less than the B- quality commons and uncommons.

Overall, this just means the quality of decks in this format is lower than what we’re used to. A 7/10 in Core Set 2021 is probably equivalent to a 2/10 or 3/10 in most modern Draft formats. Don’t be disheartened by a deck that looks mediocre and scrappy. It will likely still perform all right.

As I’ve described in the sections above, it’s not just about scrappy decks that are below-par given modern expectations. It’s also about how the delta between a C-tier and B-tier card is much larger than normal. And, as a corollary, that it’s impossible to turn a C-tier card into a B-tier card via synergy. This has a large impact on both Draft strategy and format speed.

The density of packs with minimal incentive towards specific archetypes is high because the commons don’t push hard enough in that manner. Remember, maximizing dregs still doesn’t break out of the C-tier. This greatly incentivizes committing to a color early.

Not an archetype. A color.

This is an important distinction. If the wheel is unlikely to provide an archetypal direction and reward, the best way to navigate is to maximize the potential for good cards. Every deck will be built by maximizing dregs, but games will be won via higher card quality. If a B-tier card wheels and the current pool consists mainly of one color, it is easy to capitalize on that wheel without throwing away early picks. And given the density of dregs in the format, throwing away too many early picks greatly increases the probability of missing on playables.

In my first article about this format, I gave the following Pack 1, Pick 3 decision:

I argued that the correct pick was Conclave Mentor. It is likely to be the absolute best card in any Selesnya deck, and while common sense would suggest that it’s a pick that keeps you less open, I demonstrated how that isn’t necessarily true. However, given the context of the format I now understand, the correct pick is Basri’s Acolyte. The incentive to stay monocolored is so high that, even without the Indulging Patrician, I believe Basri’s Acolyte would still be the correct pick.

This format is hostile to speculative picks. This is because so many packs don’t have anything substantial for any archetypes. The more picks you give up to speculate, the more likely your deck will contain below-par cards. But what does that mean when a decision is between on-color below-par cards, and off-color acceptable cards that are still unexciting?

The best card in this pack is Thrill of Possibility.

Let that sink in for a minute. Pack 1, Pick 4, and the best card is filler.

This is a common occurrence. I think modern Draft strategy says to take Swiftwater Cliffs or Thrill of Possibility because they’re the best cards in the pack and it’s important to stay open to any strategy. However, I think the optimal Draft strategy for the current format is to hold onto powerful cards. In the scenario here, with two gold uncommons to start a draft, it will be rare to back off Azorius because the format is hostile to bobbing and weaving.

I genuinely believe this pick is between Defiant Strike and Dub, as those are the only cards Azorius will play. It will take a while to get used to drafting this way, but it will pay dividends in the format. Commit earlier if you have a consistent and good start. Don’t waver without good reason.

Pack 1, Pick 1, I believe Grasp of Darkness is better than Chandra’s Magmutt. However, with just a Scorching Dragonfire in my pool, I will take the Magmutt over the Grasp and don’t think the pick is remotely close. However much you bias towards initial picks, increase it. Don’t straight-up marry your first pick, but I do believe it is more likely to play your first pick in this format than in most.

Let’s go through one more example.

As crazy as it is, the correct pick out of this pack is Frantic Inventory. The most powerful card in this pack is Leafkin Avenger, but it’s not amazingly powerful and completely eliminates the option of staying monocolored early.

While some could make the argument that Thrill of Possibility or some of the other commons are better than Frantic Inventory here, Inventory opens the cut-a-color tactic. It’s the only blue card in this pack, and hence it is easy to send a strong signal downstream that blue is being drafted. In many formats, that would be just a tie-breaker. However, given that staying monocolored is the optimal Draft strategy by a significant margin, cutting blue is naturally in line with that strategy.

The Impact on Format Speed

When every deck is filled with suboptimal cards, aggressive decks reign supreme. This is for a few reasons:

While the Magic Arena metagame hasn’t fully caught up to this, Magic Online appears to be quite aggressive. Boros, Selesnya, and Gruul are all fast archetypes that are doing well in this format, so much so that blue decks are starting to play Wall of Runes in order to keep up with them. But there have been many older formats where aggressive decks didn’t run rampant that had the “filled with suboptimal cards” quality. What’s different here?

It all boils down to that delta between C-tier and B-tier cards. This delta makes gameplay focus on “who casts more B-tier cards,” as that person is likely at a significant advantage. Until the format adapts in a very specific way, and this is the key reason Core Set 2021 Limited will stay at a fast pace:

The best way to have agency over winning games in Core Set 2021 Limited is to trade C-tier cards with B-tier cards.

You may have noticed that Fetid Imp seems significantly better than it has before. This is why. It’s a mediocre two-drop filler creature that can trade up with much better cards. Secure the Scene is a pretty terrible removal spell. It’s basically a five-mana Kasmina’s Transmutation. However, it’s playable in this format as a card that wheels that can trade with B-tier cards. If you focus the dreg slot as can-trade-up and has-some-synergy-with-my-deck, that’s the key to succeeding in this format. And aggressive strategies do that the best. 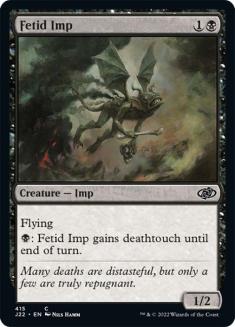 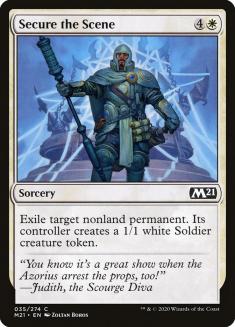 Getting ahead early is a great way to force suboptimal trades, making it easier to trade a C-tier card for a B-tier card. And those C-tier dregs are creatures with the synergy of facilitating an aggressive strategy. Hence the dregs of aggressive decks naturally tend towards both this concept of maximization in deck and the ability to trade-up.

While I’ve concluded that this comes together as a format I don’t enjoy at all, I hope what I’ve learned helps you trophy your next draft! And I hope you enjoy the format more than I do, too.