Do I have everybody’s attention now?

That’s right, and you heard it here first. Fateful Absence may very well be the best card in Innistrad: Midnight Hunt Standard, and quite possibly ruin it. Oh, you don’t believe me? You think I’m just using a clickbait title for my article to con y’all into reading my work? Well that very well may be true. What’s also true is that I’m extremely nervous about what Fateful Absence may do to our beloved Standard format.

And yes, the format is beloved! 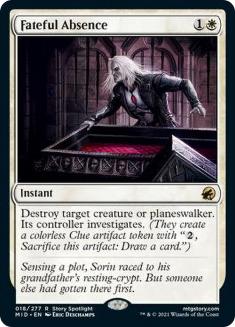 So before I actually go into my “the sky is falling” monologue for this week, let’s first take a quick look at Fateful Absence. It is a two-mana instant-speed removal spell that can destroy any creature or planeswalker. It’s been a long time since we’ve seen this amount of flexibility on a two-mana removal spell. Hell, we’ve honestly never seen one as an instant that can kill any planeswalker!

But they get a Clue Brad, don’t forget about that.

So there’s a drawback on Fateful Absence, because if there wasn’t this may have very well been the best card they’ve printed in the past decade in Standard. I seriously believe that. Luckily this card has this specific drawback or we may have been in a situation where we collectively design an unstoppable control deck that has the best interaction spell ever to find its way into Standard.

Since Fateful Absence has this drawback, I find it very unlikely a control deck is going to want to utilize this card. To be fair, a traditional control deck really doesn’t exist anymore for a variety of reasons, but one of them would be exacerbated when playing with Fateful Absence. You just don’t want your aggressive opponent drawing extra cards, and a control deck will give them time to access the Clue’s ability.

So let’s ignore control for a minute. Ever since the rules changed to the London Mulligan, Standard has sped up. That’s only been compounded by the fact that card advantage has effectively become a mechanic fused to almost every good card in the format. Just think about it — almost every card either puts tokens onto the battlefield, can be a land or a spell, has a enter-the-battlefield or dies trigger, or simply just states you draw extra cards.

These two factors culminate in an entire shift in the way Magic is played. No longer do people truly run out of things to do with their mana. Maybe they don’t have spells to cast, but they probably have abilities to activate or lands to animate. That’s exactly the world where a card like Fateful Absence is going to shine. Who cares if they take time off to draw an extra card when they probably already were gaining an advantage with their mana anyway, or your removal spell allowed you time to do something way better than them spending two mana to draw a card.

Here’s an example of a deck I’ll be trying out this Thursday on my stream. I just love how it has the ability to play some of the most powerful threats the format has to offer while also having access to some of the best interaction as well. After sideboard I predict green-based mirrors to get very grindy, so extra copies of Ranger Class and Showdown of the Skalds make a ton of sense to me when pairing them with cards like Burn Down the House and Burning Hands. In all honesty, I’m really excited for some midrange mirrors that don’t involve the Adventure package!

Back to the topic at hand, just look at this deck and tell me how Fateful Absence doesn’t slot perfectly into it. You have so many powerful cards that it’s almost impossible for an opponent to even find time to crack the Clue you give them! You can also cast it off the Treasure your Goldspan Dragon gives you, allowing you access to attack into pretty much everything.

This section is going to be quite short, but it is worth mentioning that a card like Fateful Absence is the perfect interaction spell for combo decks. Last season’s Jeskai Mutate deck would have loved a card like this, as they really didn’t caare if an opponent got a card here or there. All they cared about was doing their thing, which was far more powerful. I guess on the flip side of things, this would have also been a great interactive spell against them, so I guess it balances out?

Regardless, if there’s a combo deck in Standard that can support this card, it will be better for it and potentially be broken.

Now here’s where I get to my “the sky is falling” rant. Fateful Absence isn’t good in an aggro deck either! A deck like Mono-White Aggro❄ is going to want to pressure their opponents, and find situations where they can get extra damage in with Faceless Haven. Of course there’ll be games where the deck gets out to a quick start and a card like Fateful Absence helps push the final points of damage.

One of the most common aspects of Standard is that games typically slow down after sideboarding. This is because both players start by bringing in more and better interactive spells. Now both players have adequate interaction with each other’s strategies. This lowers the chance of someone “coming out of the gates,” which allows games to develop a bit more. To plan for that, both players typically also bring in a few more ways to generate card advantage now that they either no longer have access to their aggressive assaults or they simply know they won’t work.

With these things happening, the advantage of extra cards will always go to the person who has the more powerful spells. That’s typically not the aggressive deck. So while it may be fine for the more midrange strategy to fire off a couple of copies of Fateful Absence, it’s potentially devastating for the hyper-aggressive deck to do the same in return. If they do, it pretty much forces them to kill the opponent before they get to use the potential card advantage.

This is why I think Fateful Absence is dangerous. It’s an interactive spell poised to improve midrange decks, which have already been the best things you can be doing in Standard for some time now. So if my biggest fears come true, I expect a deck like the Naya Midrange one I posted above to become tuned by our collective efforts and then completely take over the metagame.

Now, it might not be Naya. It could be anything really, but what’s important is if it exists, it’s most likely bad for the format. It will have access to the format’s best card advantage, whatever that is, but then also the format’s best interaction spell. Fateful Absence will make it difficult for a control deck to slam a finisher and win with it, while also making it difficult for an aggressive deck to put up a sizable assault in the face of such a cheap and quick removal spell.

Personally, I love playing the format’s best deck, and lust over it when it’s a three-color midrange deck. If this is our future, I’ll be sure to enjoy it. Well, at least for a while anyway. Cards like Fateful Absence can help stagnate a format if there isn’t any ebb and flow of which removal spells you should play. 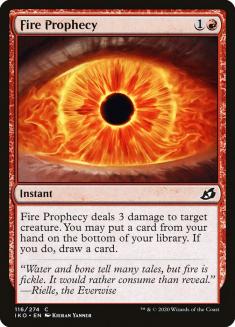 When the removal spells are all similar in effect while differing in conditions, then the game can easily evolve, as players can continuously play different threats to get around the commonly played removal, and then play different removal to interact with the commonly played threats. This can’t happen if the format is littered with Doom Blades, Hero’s Downfalls, and now Fateful Absences. If things are too good, there’s no point in playing any alternatives.

Now I could totally be wrong, and Fateful Absence is just another medium white removal spell that sees marginal play. I just don’t think I am. Do you?