Two weeks ago, I played Mono-Red Aggro❄ in Kaldheim Standard to a Top 8 finish in the second SCG Tour Online $5K Strixhaven Championship Qualifier. Brandon Burton (AKA sandydogmtg) can be credited with both this specific list I had success with and popularizing the archetype in Kaldheim Standard in general. I learned a bunch from watching his stream, and my opponents did too, as I faced the 75-card mirror in both Round 9 and the quarterfinals of the event.

In terms of positioning, Mono-Red Aggro❄ is best suited for a field of Sultai Ramp (Yorion), Jeskai Cycling, and Dimir Rogues. However, if Mono-White Aggro❄ is popular, Mono-Red Aggro❄ should stay home. I’ve found the current builds of Lovestruck Beast decks to be completely reasonable matchups, but that could change if Mono-Red Aggro❄ is the center of attention on a particular weekend. 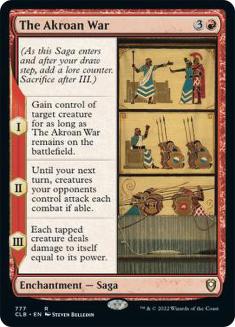 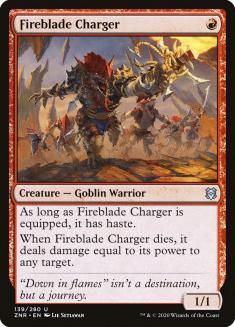 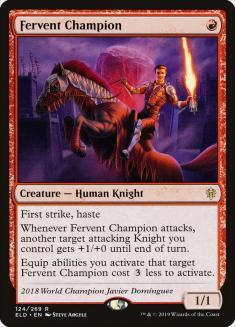 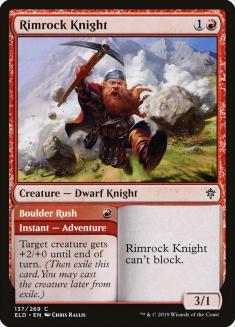 This matchup is about jamming your threats before they are invalidated by Emergent Ultimatum. Sultai Ramp is just clunky enough that they’ll usually give you the chance to get past the finish line. Most of your creatures have an odd mana value, so try to keep at least one even-costed creature on the battlefield for Extinction Event. Torbran, Thane of Red Fell does double duty by being even and dodging Shadows’ Verdict.

After sideboard, a typical Sultai Ramp will have at least three copies combined of a good brick wall creature like Polukranos, Unchained or Elder Gargaroth, which is why The Akroan War comes in. Just one hit from either of these wearing an Embercleave can finish them off in an otherwise stabilized game. Be aware of Stomp getting rid of Polukranos’s damage prevention effect, causing it to both lose the +1/+1 counters and still take damage.

Be willing to mulligan very aggressively in this matchup. A seven-card hand without a one- or two-drop creature is not aggressive enough, even if it contains Roiling Vortex. Speaking of Roiling Vortex, try to deploy it just before the Ultimatum turn, so as to not make it an easy target for Binding the Old Gods.

Sideboard games are about long-term planning. Everything will usually die, so try to be the player with the last threat left standing. Don’t deploy Anax until you’ve given your opponent ample opportunity to use Scorching Dragonfire. Try to resolve Stomp when your opponent is tapped out, lest their Stomp fizzle your own and leave you down a Bonecrusher Giant. Bringing in one Ox of Agonas plays to this plan, but sideboarding in multiples means you can just lose to an aggressive opening.

The next three matchups are the Lovestruck Beast decks. Let’s focus on that card first. While it’s easiest to win when your opponent doesn’t draw the card, it’s important to establish a plan for how you’re going to beat it. Almost all of your cards contribute to some plan. In order of preference, you can:

Now that you have a plan for Lovestruck Beast, the matchup plan is to be flexible based on your draw. Usually you’re the beatdown, but sometimes you’re the control. The lists from the February Kaldheim League Weekend were particularly targeted at Mono-Red with lots of removal in the sideboard, but such builds are now a thing of the past.

VS Naya Adventures (with Toski/Clarion Spirit)

Most of the information about Gruul Adventures still holds, but now you have better opportunities for aggressive openings due to them tapping out for Showdown of the Skalds or having mana stumbles. Furthermore, their smaller creatures trade nicely for your cheap removal, and they have fewer removal spells themselves.

Try to avoid presenting a favorable window for Chop Down, a removal spell which Torbran nicely dodges, on Anax if you can. This is a matchup where you should be looking to cast a second copy of Anax on a battlefield that already has one to get the four Satyr tokens, which play nicely with Torbran and can go around Lovestruck Beast.

Temur Adventures is the best-positioned Lovestruck Beast deck against you. Beyond the normal Gruul-colored Adventures package, they have Petty Theft to mess with both Anax and Embercleave, and an end-game that finishes you off quickly. The two things you have going for you is that Robber of the Rich can steal cards reliably in Game 1, and that Frost Bite embarrasses Kazandu Mammoth. Don’t be afraid to mulligan aggressively, since their end-game escalates quickly with Goldspan Dragon into Alrund’s Epiphany.

VS Jeskai Cycling (without Irencrag Pyromancer)

Your deck checks all the boxes against Jeskai Cycling. There are early answers for Flourishing Fox, Embercleave to push through 1/1s, and a fast enough clock that forces Zenith Flare to be pointed at your creatures rather than your face.

Robber of the Rich really shines here, as your opponent can’t decrease their hand size very quickly, and the spells that you steal are mostly helpful at closing out the game. The easiest route to losing a game is getting punked out by Flourishing Fox on the draw, but you’ll usually get a window to do five or six damage to it on Turn 3 with two burn spells.

Torbran is one of your best threats after sideboard, since it dodges all interaction except Redcap Melee. As long as you answer Irencrag Pyromancer (and a potential early Flourishing Fox), one of your creatures wearing an Embercleave will eventually finish off your opponent.

Your opponent is forced to take the control role in the matchup and your deck is aggressive enough to tax their ability to fulfill this role. Try to hold your last removal effect for Lurrus while also keeping in mind that your opponent will have access to Agadeem’s Awakening in the late-game to produce up to four blockers, so don’t throw away too much material for damage if you can help it.

The sideboard games will revolve around the escape creatures, so don’t be afraid to mulligan land-light hands. You will rarely run out of spells to cast with all your mana, so the easiest way to lose is being stuck on two or three lands. If your opponent is getting close to decking you, favor bringing back a Phoenix over Ox so as to deal yourself less deck damage.

Cedric will be happy to hear about how overwhelmingly favored Mono-White is against Mono-Red. If you’re playing Mono-Red and an opponent leads on Snow-Covered Plains, the honest truth is that you’re gonna have a bad time and nothing I say will materially change that.

Games that you win will involve punking them out with Anax wearing Embercleave or an awkward draw from them. Reidane is highly damaging to your gameplan, so hold removal for it wherever possible. I’ve found that building a gameplan around The Akroan War ruining opposing combat plans to be most correlated with winning sideboard games. Aggro mirrors are hard, so be prepared for plenty of thinking.