So, Wizards of the Coast (WotC) left our dear Dig Through Time and Thassa’s Oracle legal, did they? And they simultaneously unbanned Oath of Nissa, which pushes Mono-Green Devotion and Kethis Combo back into the world of tournament decks? This is incredible news. Dimir Inverter will continue to put up insane results in the hands of the most experienced players, aided by the cover of new decks enabled by this unbanning.

Why is Mono-White Devotion likely to see a downtick in play? Simply put, there are only so many Nykthos, Shrine to Nyx gamers in a single metagame. When you offer Devotion enthusiasts another more explosive color to play, they’ll pick it up and run with it. A green Ponder that brings a single pip of devotion along for the ride is more than enough to bring back Mono-Green Devotion.

The best part? Mono-Green Devotion beats Mono-White Devotion soundly. The higher consistency in finding Nykthos; the more explosive starts with Llanowar Elves and Elvish Mystic; and the busted top end with Nissa, Who Shakes the World and giant Walking Ballistas all overpower a ragtag crew of Knight of the White Orchid and Arcanist’s Owl. This will depress Mono-White Devotion’s numbers even further, which makes the metagame even more ripe for Dimir Inverter.

Kethis Combo is another beast entirely. The fringe combo deck has danced on the line between “broken” and “unplayable” for quite some time. It’s likely to remain mostly sidelined, with a few brave souls tinkering and adjusting it, until someday it just destroys an unprepared metagame. Fortunately, it’s a pretty good matchup for Dimir Inverter in the meantime, so you can expect to farm Kethis players to pad your win percentage in the near future.

Why are both Kethis Combo and Mono-Green Devotion good matchups for Dimir Inverter? In a word, interaction. Both of these decks are vulnerable to the type of cheap interaction that Dimir Inverter brings to the table. Thoughtseize is great against both decks, as are Fatal Push and Eliminate. You just have to interrupt the opponent’s gameplan for long enough to create a window to combo out in the midgame. Not tough at all! In addition, you can happily take on the control role against both decks, casting disruptive spell after disruptive spell until you run them out of good stuff. You can then proceed to win with a Dig Through Time at your leisure.

The difference between Mono-Green Devotion and Mono-White Devotion is that Mono-White Devotion has basically all of its cog creatures replace themselves. Knight of the White Orchid, Thraben Inspector, and Arcanist’s Owl all make removal spells look silly by their superb effects on entering the battlefield. You can’t win a game by Fatal Pushing Thraben Inspectors. Fatal Pushing Llanowar Elves, though? That’s a way to win.

To use an outdated Legacy analogy: the worst matchup for Death and Taxes is Elves. Why? Elves has an unbelievable mana advantage and snowballs way out above what Death and Taxes can hope to contain. But Death and Taxes, being full of two-for-one creatures like Stoneforge Mystic and Recruiter of the Guard, is incredibly resilient against decks like Miracles or various Snapcaster Mage / Lightning Bolt decks.

With enough Lightning Bolts, Fatal Pushes, and Snapcaster Mages, any blue midrange deck could hope to contain Elves long enough to turn the corner with a planeswalker. (Obviously Elvish Visionary / Wirewood Symbiote offered a unique piece of resilience in Legacy, but that doesn’t quite exist in Pioneer.) The more your opponents’ creatures snowball, the better interaction gets. The more they cantrip, the worse your interaction gets. Kethis Combo and Mono-Green Devotion are both snowball decks.

With the new plan in my personal Dimir Inverter list, it’s easier than ever to lock down the game against topdecks from either one of these opponents, as well as against the other strong combo deck that remains unscathed here, Lotus Breach.

Here’s the same list I intend to use moving forward, after a clean 10-0 sweep of some Pioneer Leagues on Magic Online even before taking the impact of the Oath of Nissa unban into consideration:

Drown in the Loch is excellent against any deck that doesn’t run Dig Through Time or Rest in Peace, as by the mid-game it will usually be a split card of Murder and Counterspell. Collective Brutality acts as some much-needed supplemental discard, supplemental removal, and blowout material against Burn.

As for Ashiok, Nightmare Muse, it’s disappointed me so far. I’m interested in replacing it with something else, but can’t seem to find the perfect card. Ideally this would be good against Mono-Black Aggro or Vampires after a critical Necromentia. It would also cover Mono-White, or at least not be totally vulnerable to Elspeth Conquers Death and/or Gideon’s Intervention, and would be good against the mirror match.

There’s not likely to be one threat that does everything we want here. Candidates for your consideration include:

I’m sure even more options are out there in the fertile fields of the Pioneer card pool. 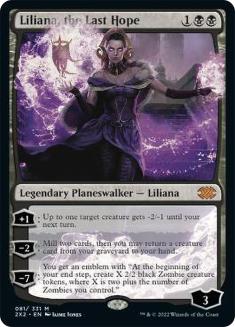 Liliana, the Last Hope is certainly the most powerful of these cards historically, and it’s one of the bigger beatings you can land against Azorius or Bant Spirits. However, with Eliminate now coming into vogue for the mirror match, it may be a worse choice than before. It also provides a juicy target for opposing copies of Swift End, which you’d prefer to strand in the opponent’s hand until you can minimize the tempo edge they gain from killing a planeswalker of yours. The same is essentially true with Pack Rat. If you just run out a Pack Rat on Turn 2 and immediately get hit with Swift End (and attacked for a few points of damage) you’re almost certainly not winning that game. 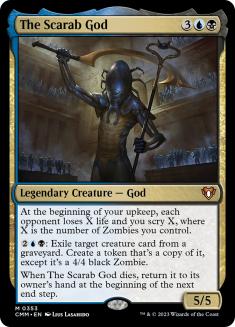 As a one- or two-of, though, The Scarab God is an interesting choice, one that can easily take over a game, and it is excellent against Mono-Black Aggro. The only problem is that Elspeth Conquers Death absolutely embarrasses The Scarab God.

Shark Typhoon might be better; it’s uncounterable when cycled, it can be found with Narset, and it is a powerful enchantment if you can resolve it, turning any Dig Through Time into something truly disgusting. If you want a low-opportunity-cost card, this is likely the best choice. It can get easily addressed by a simple Fatal Push (though those are likely not common after sideboarding in the mirror match). 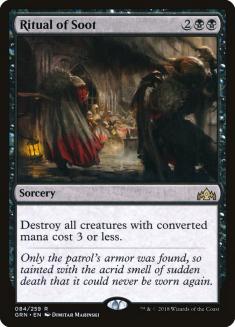 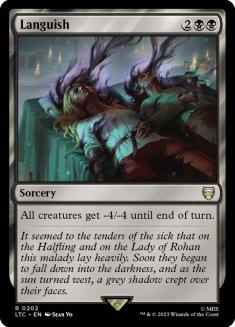 Depending on how big Mono-Green Devotion gets, it may become important to play some number of either Ritual of Soot or Languish in addition to Cry of the Carnarium. While Cry can’t stop a 4/3 Jadelight Ranger or a Nissa-ed up 3/3 Forest Elemental, Ritual and Languish both handle those threats with elegance. You might just end up squeaking out from under the immense pressure of an active Nissa!

Against Five-Color Niv-Mizzet, you have the same problem: opponents are trying hard to get you with a Slaughter Games and the theorized easy win. Ashiok usually won’t be enough to win after a Slaughter Games resolves from the Bring to Light deck.

This brings us back to the beautiful one-of from the early builds of Dimir Inverter: 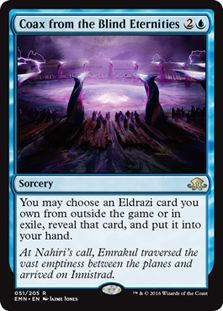 I’m still a fan of the card as a solution to a growing problem. As Cranial Extraction effects ebb and flow with the metagame, Coax becomes a more and less elegant solution. If an opponent spends a card getting rid of your Inverters only to lose to a Coax from the Blind Eternities pulling back the same Inverter, they should absolutely feel silly. Should Five-Color Niv-Mizzet and Mono-Black become more popular (with the attendant Slaughter Games and Necromentias) then you can justify a Coax. Should control decks and mirror matches abound, you’ll want Shark Typhoon. Against Mono-Green and Bant Spirits, you’re looking for Liliana. And should you want to shake things up with a Pack Rat or The Scarab God, those are the next best creature threats available.

One more hilarious benefit of playing Coax from the Blind Eternities: there are also other Eldrazi you can play if you are so inclined. Coax can find Emrakul, the Promised End if you really want a top-end finisher to beat all others, and from personal experience, no one is beating that Eldrazi in the mirror match.

As the metagame shifts to adjust to the new reality of Pioneer, it seems likely that the most popular decks will be Dimir Inverter, Mono-Green Devotion, Mono-Black Aggro (with Fourth Bridge Prowler to fight the influx of Llanowar Elves), Mono-Red Aggro (with Forge Devil to do the same), Lotus Breach, and then Five-Color Niv-Mizzet, Mono-White Devotion, Bant Spirits, and Kethis Combo in smaller amounts.

A properly tuned Dimir Inverter list will remain the best choice for an open field by quite a significant margin. This is the most advanced and thoroughly vetted progression of the stock decklist available to tackle the new challenges we’ll be facing in a rejuvenated Pioneer format.