Dominaria United previews are done, and it looks like yet another great set for Commander fans! Last week on Weekly MTG’s stream on Twitch, Wizards of the Coast (WotC) revealed the special Commander cards that are only available in Set Boosters and Collector Boosters. I wanted to highlight them here today in case you glossed over them in all the preview frenzy. 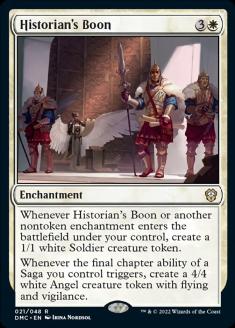 First up is Historian’s Boon, a nifty card that is clearly a plant for people who want to build a deck with a lot of Sagas. Here are some of the cards that come to mind that play well with this:

Enchantments that return to their owner’s hand seem like a great way to really leverage the first trigger of Historian’s Boon. It is a little awkward that Satsuki, the Living Lore only has two colors in its color identity. There are just 23 Sagas available in Selesnya, and not all of them are slam-dunk inclusions, since a fair number of them have rather narrow functions.  But given the frequency they’ve been appearing since their debut in Dominaria, I suspect at some point you’ll be able to stuff your Satsuki deck with a bunch of great Sagas that all work quite well together.

In the meantime, I could see someone building an enchantment-themed deck with a strong Saga presence, maybe with Tuvasa the Sunlit; Ghen, Arcanum Weaver; or even Myrkul, Lord of Bones as the commander. 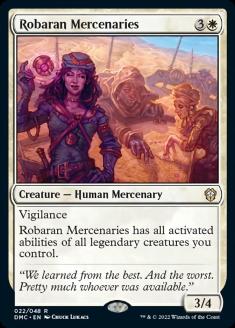 Next up is Robaran Mercenaries, which immediately brought to mind one of my all-time favorite cards, Necrotic Ooze! 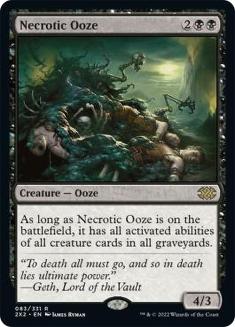 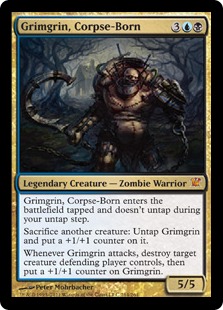 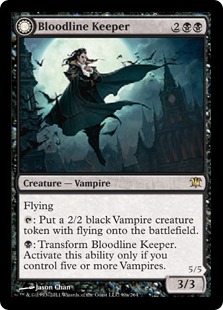 I had a lot of fun with Necrotic Ooze in a variety of tournament formats, and the core of its combo was copying the abilities of Bloodline Keeper (tapping to make a Vampire token) and Grimgrin, Corpse-Born (sacrifice a creature to untap and add a +1/+1 counter). The finishing move at some point was to give it trample and attack for lethal or copy Walking Ballista’s ability and send those +1/+1 counters at my opponent’s life total.

The ability to copy activated abilities is much more limited than Necrotic Ooze’s, only applying to legendary creatures you control.  Grimgrin is certainly a possibility, since it might be useful to untap Robaran Mercenaries on the way to grinding out value or popping off with some combo.

Have Robaran Mercenaries on the battlefield and cast Captain Sisay or Arcanis the Omnipotent? Tap away!  It’s also an awesome creature to include in your Emiel the Blessed deck, letting you borrow Emiel’s ability to blink Emiel and protect from targeted removal.  It’ll help chain together activations of legends like Oswald Fiddlebender or Fain, the Broker. Copying Beledros Witherbloom’s activated ability is painful, but getting to untap all your lands twice in a turn could fuel a huge X-spell like Finale of Devastation or Torment of Hailfire. 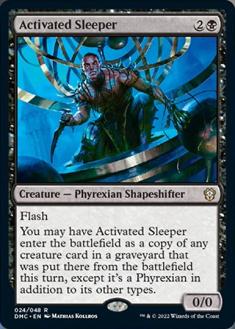 Activated Sleeper is a neat card that can be played defensively to copy an important creature of yours that died this turn, or offensively by combining it with a removal spell to take down the biggest threat on the battlefield and then making a copy of it yourself.

For this reason, I’d want Activated Sleeper in a deck with cheap removal spells like Pongify and Infernal Grasp. Since it has flash, it seems perfect to foretell with Dream Devourer or Ethereal Valkyrie, trimming two from its cost is perfect. You might also put this in any black deck where you’re running Ashnod’s Altar, so if something important is dying anyway, you can sacrifice it for two mana to help cast Activated Sleeper. 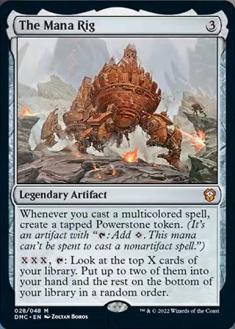 The Mana Rig is a weird card and I love it. At its basic level, it’s a slightly improved Jayemdae Tome, shaving a mana off its mana cost and activated ability to draw a single card.  But in a big mana deck that plays multicolored spells, things can quite a bit spicier!

In fact, “multicolored spell tribal” is definitely the sort of deck this is begging to be in, and perhaps the best commander for the job is Ramos, Dragon Engine. I had a Ramos deck for a long time, and it was a lot of fun, but I barely see Ramos these days.  Maybe it’s time to give it another try?  Dominaria United‘s Commander deck Painbow brings us some new cards that bolster this theme, such as Mana Cannons, Fallaji Wayfarer, and Jenson Carthalion, Druid Exile.

It’s wild the Powerstones that The Mana Rig creates can’t be used to cast nonartifact spells, but it can be used to activate any sort of abilities, including The Mana Rig itself. Since Ramos is an artifact, it works out perfectly!

If the color identity works out, I’d definitely want to include Zirda, the Dawnwaker in a deck with The Mana Rig to help shave off its activated cost and let you dig a little deeper.

Last up are the four new legendary creatures we can slot into Commander decks or use as commanders themselves: 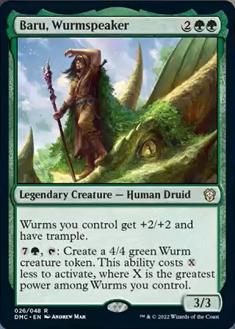 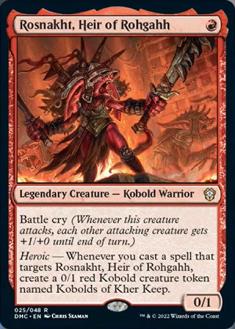 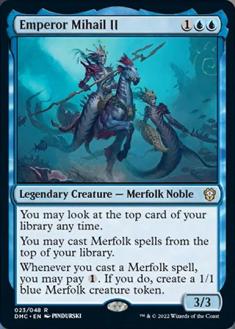 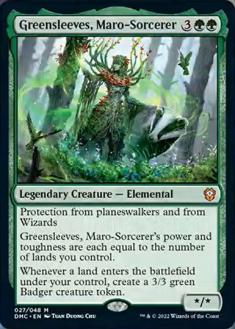 Emperor Mihail II very clearly goes in a Merfolk tribal deck and can certainly do a fine job as commander leading a mono-blue tribal version. Rosnakht, Heir of Rohgahh as a commander throws down the deckbuilding gauntlet to create an aggressive mono-red heroic deck.  Are you up to the challenge?  I know I’m going to give it a try. More than likely, though, I see Rosnakht in the 99 of a Kobold-themed deck with Rohgahh, Kher Keep Overlord as the commander.

Greensleeves, Maro-Sorcerer is a flavor-forward design, with its oddball protection abilities driven by story. Apparently, Greensleeves isn’t fond of Wizards or planeswalkers. No doubt, the weird corner cases where the protection abilities matter will make some fun stories—don’t forget that creatures with the changeling ability count as Wizards!  The rest of Greensleeves’s text box means it’ll slot easily into any landfall or “lands matter” style of deck and do good work.

Then there’s Baru, Wurmspeaker, which amazingly unlocks the urge for building a Wurm tribal deck we never knew we needed until now. This carries me right back to 1994, when I proudly put Craw Wurms in my Magic decks. Six-power creatures were gigantic, and since it was a common, I had a lot of them in my collection. Since then, WotC has printed a lot of Wurm creatures, and almost all of them are Limited chaff you wouldn’t dream of putting into a modern Commander deck. Baru, Wurmspeaker’s static ability changes that calculus by making them bigger and giving them trample, so it’s time to start digging into our deck boxes and dust off those Wurm cards!

If ever a deck wanted Impervious Greatwurm, it’s this one, since giving it trample will be huge (pardon the pun). [Copy Editor’s Note: No.] You can even tap Baru to help pay for its convoke ability. Grothama, All-Devouring is one of my all-time favorite Commander decks, so I’m excited that there’s another deck I can slot it into the 99 for fun and games. I love that Scale Up gives Baru the opportunity to get in on the giant, trampling Wurm beatdown game.

Since most of the Wurm creatures hang out high on the mana curve, we can potentially round out the lower end of the mana curve with Shapeshifters that have the changeling ability. Realmwalker and Bloodline Pretender are excellent three-mana plays, and Chameleon Colossus is fantastic at four.  It’s particularly sweet that Baru boosts Chameleon Colossus into a 6/6 with trample, which makes its size doubling ability even better.

Between Conifer Wurm and Faceless Haven, it’s probably a good idea to run Snow-Covered Forests as our manabase if we have enough of them. I love that Baru makes Faceless Haven and Mutavault into impressively sized creatures. Even on an otherwise empty battlefield, you can tap Mutavault for mana to activate its ability, making it a 4/4 Wurm thanks to Baru, and then Baru’s ability only costs three generic and one green mana.

For tribal support, I’d lean towards ways to discount your Wurm spells, like Urza’s Incubator and Herald’s Horn, or cheat them onto the battlefield with something like Cryptic Gateway or Descendants’ Path.  I’d also slide a Runed Stalactite into the deck so that Baru can get in on the Wurm action.

Since we’ll usually have at least one high-powered Wurm creature on the battlefield, we can make use of cards that care about high power creatures. Rishkar’s Expertise in particular should draw a bunch of cards and let you cast something for free. I also really love cards like Unnatural Growth and God-Eternal Rhonas that will double the power of our creatures, and since Wurms get trample with Baru, they could punch through for lethal damage.

Cheat onto the Battlefield

Lastly, I’d like more ways to cheat large Wurm creatures onto the battlefield. I haven’t seen Lurking Predators played in a while, but a Baru deck seems like the perfect place for a revival. Similarly, I’d want to jam Selvala’s Stampede and See the Unwritten in this deck, since there should be plenty of big hits.

What do you think of these cool new Commander cards from the Dominaria United set boosters?  Which of the legends are your favorite?  What other cards are you planning on putting in your Baru, Wurmspeaker deck?