When I first made my Feldon of the Third Path deck, it was secretly a Goblin deck.  There were a lot of wacky Goblin cards with cool abilities that I wanted to have available to copy from the graveyard.  First of many was Shrieking Mogg, which I could copy in the graveyard with Feldon to tap down all creatures during an opponent’s turn.  It was an incredibly durdly deck, and over time I realized that I was spending a lot of time, mana, and card slots on medium-grade shenanigans that didn’t really make for big and splashy plays that make good stories. Today, Feldon has less of a Goblin theme and more boom-booms.

One card I regretted cutting from the deck because I always loved it was Slobad, Goblin Tinkerer. 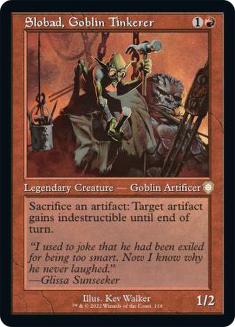 I love the name Slobad, which seems a riff on “so bad.” I love that he’s an Artificer, and over time it seemed that Wizards of the Coast (WotC) leaned into the idea of Goblin tinkers who do interesting things with artifacts, to the point that I decided I wanted to make a Goblin tribal deck with Slobad as the commander and a bunch of artifacts that do wacky things.

Then came The Brothers’ War Commander decks which brought an old-frame style Slobad and old-frame style artifacts, and I knew now was the time.  So today I reveal my long-awaited Slobad deck to the world!  Let’s dig in.

Goblin tinkers date back to Goblin Welder from Urza’s Legacy, a bonkers powerful card that used to see Legacy play where the Welder would bounce a Sundering Titan in and out of the battlefield, nuking most players’ manabases into oblivion.  WotC actually included Sundering Titan in The Brothers’ War retro artifacts, but thankfully it’s banned in Commander, so opponents won’t need to worry about that nonsense. The printing of Goblin Engineer and Scrap Welder in recent years is what brought Slobad to my mind.  Toggo, Goblin Weaponsmith makes free artifacts whenever you play a land, so I figured he warrants a slot.

Outside of Goblin tinkers, I’ve included a bunch of Goblin synergies so that the deck can just do Goblin tribal shenanigans. I’ve been looking for a place to finally play my one copy of Conspicuous Snoop and Muxus, Goblin Grandee, and here we go.  I also love that I can slide in the D&D Goblins like Hobgoblin Bandit Lord and Battle Cry Goblin. As a bonus, I also have an Italian language Goblin Wizard from The Dark that’s finally found a home, which can nicely save mana on putting something like Muxus onto the battlefield.

Goblin Recruiter is just nuts in the Goblin deck.  With its ability, you can put Muxus on the top of your deck, along with six other Goblins, including Goblin Warchief to provide haste and Krenko, Mob Boss to provide a bunch of extra bodies and go off next turn, assuming your opponents will let that happen.

To round out the Goblin base, I wanted to pick some off-the-beaten-path Goblins like Goblin Diplomats and Spikeshot Elder. Of course, my favorite Goblin of all time, Brash Taunter, has to go in here, along with elder relative Mogg Maniac. Kiki-Jiki, Mirror Breaker is a well-played powerhouse card, so it’s not off the beaten path, but it serves a bit as an honorary Feldon of the Third Path here.

Okay, so what about wacky artifacts to tinker with?  I’m excited to give the brand-spanking-new Wondrous Crucible a whirl to see what it can do, milling cards and copying nonland cards in the graveyard – hey, it’s also kinda like Feldon!  Oh, and it gives all my permanents ward 2?  Heck yeah!

Lithoform Engine is like a Swiss Army knife of fun, and I’m happy to have it here where all of its abilities can do cool things. I even get to use the old-frame style from the new Commander decks.

Mycosynth Lattice does a lot of work in this deck, super-charging Slobad to protect key permanents from being destroyed, while you can also sacrifice the Lattice to avoid something terrible happening like a Hellkite Tyrant attacking you.

Goblin Firebomb is expensive to use, but it’s a brand-new artifact with Goblin in the name, so I figured I’d make room for it.

To play along with the artifact side of the deck, I’ve included some cards to help synergize with artifacts. Trading Post and Daretti, Scrap Savant do a nice job of putting artifacts in and out of the graveyard for profit. Trash for Treasure and Scrap Mastery can reanimate key artifacts from the graveyard.  Liquimetal Coating does serious work, turning a key permanent into an artifact that you can now save from being destroyed with Slobad – including Slobad!

I don’t usually advocate playing a card like Darksteel Forge, but I wanted to have a strong end-game, and something like Mycosynth Lattice and Darksteel Forge is a potent set-up for victory.  And it’s a mono-red deck, so it’s not like I have many ways to stop an exile effect to break things up.

I had Goblin Trashmaster plus Liquimetal Coating going in my Feldon deck, and I’m excited to import it here where the Trashmaster’s lord effect makes a bigger difference. I also love the one-two punch of Mogg Infestation and Goblin Sharpshooter to completely annihilate an opponent’s crowded battlefield of creatures. Spine of Ish Sah and Nevinyrral’s Disk form another way to clear away problems that mono-red might otherwise have. Slobad can even give the Disk indestructible so that you can use it again.

I’m excited to slot The Mightstone and Weakstone into this deck, especially since I can sacrifice it and bring it back multiple times to either draw two cards or pick off a medium-sized creature. It’s important to note that a meld card’s color identity is determined only by the mana costs and mana symbols in the rules text of its front face. No symbols or rules text of the permanent it melds into are considered. So even though The Mightstone and Weakstone is one half of the meld Urza, Planeswalker, it’s a colorless card that any deck can play for value.

I am excited about Sardian Avenger for Commander, an incredibly sweet hate card for the crazy amount of Treasure support that’s out there. As a Goblin, it naturally fits here, but I’m probably going to slot it into a bunch of other decks too. I’m pleased to see its current price has dropped considerably from its preorder price!

I’ve got Soul-Guide Lantern and Nautiloid Ship for graveyard control, and two lands to help deal with problematic lands like Maze of Ith or Cabal Coffers.

For card advantage, Goblin Ringleader does good work if we stack our library with Goblin Recruiter, and if we’ve got Conspicuous Snoop, we can at least know when we’re going to draw one Goblin. I also love Grenzo, Havoc Raiser to “draw” cards from our opponents’ libraries.

I keep putting Mighty Servant of Leuk-o into decks and happily put another one here, where it should be incredibly easy to crew with two creatures to rumble over chump blockers and draw two cards.

I’m excited to try out Symmetry Matrix from The Brothers’ War, since so many of the Goblins in the deck or created by cards are going to be symmetrical with power and toughness.

For mana ramp, I’m thrilled to add Liquimetal Torque, which does nearly as much heavy lifting as Liquimetal Coating while also providing an extra mana when needed.  Cursed Mirror is a fantastic card for just about any red deck where it can copy some huge value creature for the turn when it enters the battlefield, but in this deck we can potentially use it again and again. Plus, I get to use the old-frame style from the Commander decks.

What Goblin cards would you put in your Slobad, Goblin Tinkerer deck that I may have missed here?  How about some wacky or cool artifacts?