Commander Legends: Battle for Baldur’s Gate is fully released into the wild, and the set is hot fire for Commander deck brewers!  There are a ton of awesome new legends to build around, but what’s crazy is the mix and match potential of the legends with Choose a Background and whatever Background card you want to pair them with. This week I wanted to dig into one of the coolest of these new cards, Durnan of the Yawning Portal! 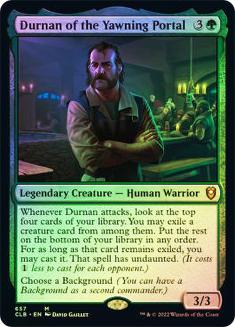 Durnan, along with the background Passionate Archaeologist, is the backup commander from the Commander precon deck Exit from Exile.  Durnan (and the Background) play great with the theme of the deck of playing cards from exile, but I’d like to suggest that Durnan is awesome enough to play at the helm of his own Commander deck, or even in the 99 of other green Commander decks that lean into attacking a lot.

Let’s take a look at that text box:

Whenever Durnan attacks, look at the top four cards of your library. You may exile a creature card from among them. Put the rest on the bottom of your library in any order. For as long as that card remains exiled, you may cast it. That spell has undaunted. (It costs {1} less to cast for each opponent.)

There was a cycle of cards that featured the undaunted mechanic from Commander 2016 that were pretty much duds and almost never see play in the format.

But thinking about stapling undaunted to a creature card and sitting it over in exile until you want to cast it?  Now that is the hotness, and bravo to Wizards of the Coast (WotC) for putting a fresh spin on the mechanic and bringing it back!  It’s so good that I’m definitely slotting this card in several of my green-based Commander decks, so keep an eye out on Twitter to see which decks of mine are getting the Yawning Portal goods.

But if we want to make a Commander deck with Durnan leading the way, we get to take advantage of the rest of his text box: Choose a Background.  Let’s go! 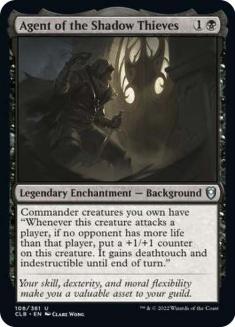 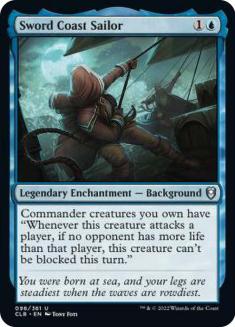 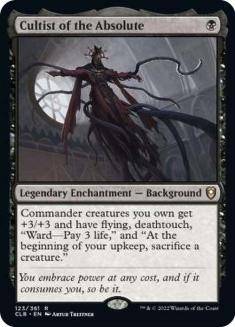 Backgrounds that help Durnan attack and survive are premium candidates for the command zone, and I think Agent of the Shadow Thieves is one of the best.

Commander creatures you own have “Whenever this creature attacks a player, if no opponent has more life than that player, put a +1/+1 counter on this creature. It gains deathtouch and indestructible until end of turn.”

This is perfect because it really doesn’t matter who you attack; you just want that attack trigger each time, so with Agent of the Shadow Thieves, you just simply attack an opponent who qualifies, and Durnan gets a bit bigger and becomes very difficult to kill in combat.

If you’d rather go Simic over Golgari, Sword Coast Sailor is nearly as good by making Durnan unblockable with the same sort of stipulation. Cultist of the Absolute provides evasion and makes Durnan hit harder, but it makes your commander require a creature sacrifice each upkeep. This sort of drawback is most easily fed with token creatures, which runs a bit counter to Durnan’s game plan, so only choose this if you’re looking for a deckbuilding challenge. 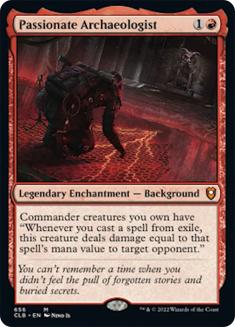 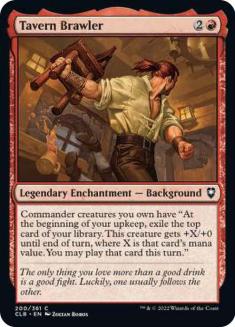 Passionate Archaeologist gives some serious Vial Smasher the Fierce vibes and works nicely with the play from exile theme from the precon deck. If you want to lean into those synergies and basically just rework the precon, you definitely want to rock that one-two punch. Tavern Brawler is another decent option for this strategy and might even be better since it can give you that virtual “card draw” of playing cards from exile. 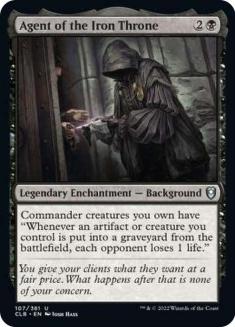 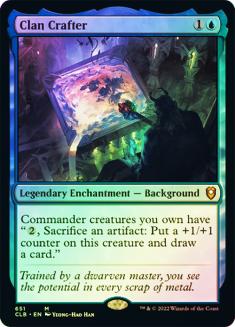 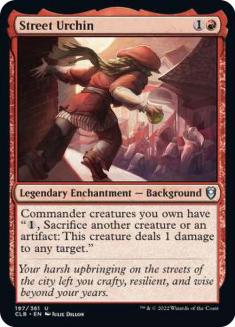 One interesting thing to consider about Durnan’s ability is to use a lot of artifact creatures, since you can effectively make a lot of them free to cast, so why not choose a background that leans into that angle?  Agent of the Iron Throne provides retribution for destroy effects for your artifacts or creatures, and if you can set up a recursion loop for a creature or artifact, Agent of the Iron Throne can be your win condition. Clan Crafter combines nicely with cheap artifact creatures that Durnan gives undaunted to cast for free and sacrifice to grow Durnan and draw a card.  Last up is Street Urchin if you want a sacrifice outlet in your command zone for creatures and artifacts.

Choosing a Background: Humans and Warriors 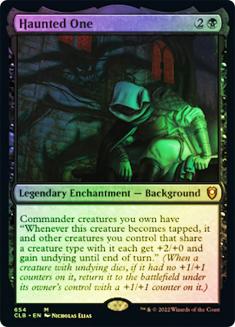 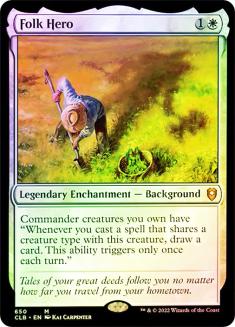 Haunted One is a potent background that gives Durnan and any other Human or Warrior +2/+0 and undying until the end of the turn. There are 329 Warriors and 657 Humans in Golgari so you could potentially build a tribal deck with these two commanders. If you’d rather go Selesnya, there are 1,206 Humans and 301 Warriors that wouldn’t mind Durnan with a Folk Hero background.

Choosing a Background: Other Options 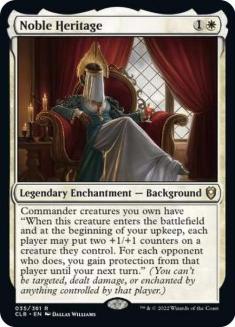 Noble Heritage is another choice for Selesnya Durnan if you want to work +1/+1 counter synergies into Durnan, though you do run the risk of your opponents’ creatures getting huge and eventually attacking you once they stock growing them. If Orzhov Advokist is your jam, this might be the route you want to take. 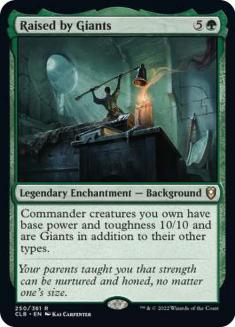 Mono-Green Durnan could be fun with Raised by Giants, letting Durnan hit hard while tucking away creatures you can cast at a discount.  Don’t leave home without Rancor and Greater Good. 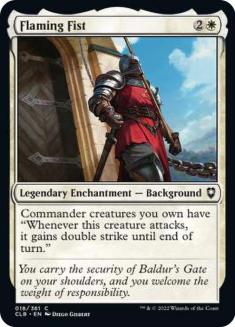 If Durnan triggered off combat damage rather than simply attacking, we’d be all over Flaming Fist as his background, but if you run some number of cards like Toski, Bearer of Secrets; Ohran Frostfang; or Old Gnawbone, it’s certainly a consideration. 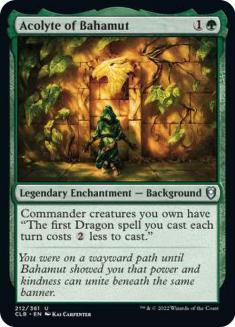 Lastly, I wanted to mention Acolyte of Bahamut. With Commander Legends: Battle for Baldur’s Gate bringing thirteen new Dragons to a mono-green deck to go along with a handful of playable Dragons we’ve had before, such as Kura, the Boundless Sky and Old Gnawbone, you could potentially discount a Dragon a whopping five colorless mana once a turn thanks to Durnan.

Next up, let’s dig into other cards that will play great with Durnan:

Giving Durnan haste is going to pay big dividends, letting you unlock his attack trigger right away, and also letting you attack with your discounted creature the turn you cast it (assuming it’s precombat). The Gruul combination is going to provide most of the high-quality haste enablers, but there are some colorless options that should slot into all other colors.

I thought it would be fun to look for “one mana” hits from Durnan’s ability, stuff that specifically has three colorless mana and one color-specific mana in the casting cost that will maximize Durnan’s undaunted ability. For green, Toski and Forgotten Ancient jump out as great hits.

In the other colors, there’s Emberwilde Captain to get the monarch, and Disciple of Bolas to draw cards. I also love Restoration Angel, which can sit in exile as a one-mana protective spell for when you need it. Spark Double and Sakashima of a Thousand Faces lets you go down the road of creating an ever-growing army of Durnans, which could be really fun!

Discounting five-mana creatures to only cost two mana is certainly a huge benefit too, so I’d likely add a good number of these to a Durnan deck. Wulfgar of Icewind Dale plays particularly nicely in doubling up Durnan’s attack trigger. If you’re in Simic, Momir Vig, Simic Visionary’s trigger from a green creature spell pre-combat can stack your library with exactly the hit you want from Durnan’s attack.

Shaving three mana off higher-cost creatures is going to be very big game—when you attack with Durnan, you’ll presumably have at least four mana available, so dropping a six- or seven-mana monster post-combat is going to be huge. Rampaging Baloths, Sun Titan, and Noxious Gearhulk are going to be awesome hits!

If we want to lean into artifact creatures that you can cast for free or for just one or two generic mana, there are all sorts of great options there, with Academy Manufactor and Scrap Trawler right there at the top. Tanuki Transplanter is a card I’ve been trying to work into decks, since I really like its triggered ability, so being able to shave three mana off its casting cost makes it much easier to pay its configure cost right away.

Durnan has a fantastic attack trigger, but in Commander there will quickly be battlefields where there aren’t many good attack choices for a 3/3 creature, so we’ll want to include cards to help with that situation. For Selesnya Durnan, Reconnaissance is the perfect solution, getting the attack trigger and then removing Durnan from combat. Giving Durnan indestructible with cards like Hammer of Nazahn or Bastion Protector will help too.  I’ve almost never looked at Access Tunnel over Rogue’s Passage for Commander, but it is cheaper to activate and Durnan is just small enough to fit.

Also worth considering are ways to get extra triggers from Durnan with Strionic Resonator and Lithoform Engine. You can also go the extra attacks route with cards like Hellkite Charger and the brand-new hotness Karlach, Fury of Avernus.

Top of Your Library

As we talked about with Momir Vig above, stacking your library is one way to turn Durnan’s ability into getting the exact creature you need for the situation at hand, so we might want to add some other of those to the list. Scroll Rack will do awesome work here, putting any high-cost creatures you may have drawn and put them back on the library for Durnan to trigger into. I also like Hua Tuo, Honored Physician to take a dead creature and put it on top of your library for Durnan.

What do you think of Durnan of the Yawning Portal and what background would you choose?  What other cards do you think play great with it?  In which decks will you be putting it in the 99?