We’re going back in time to the days of Saturday morning cartoons with the Transformers cards. Foil and non-foil versions of these cards will be appearing in The Brothers’ War Set and Collector Booster packs, making them incredibly accessible to Commander players. These unique cards feature new and fun mechanics that make it possible to have your Vehicle commander be a creature without crewing it. All fifteen new cards provide unique and interesting playstyles as possible commanders. While it would be a lot to tackle all fifteen, I wanted to choose a few of my personal favorites and share with you a few cards I’d include in each brew. Let’s get to it and roll out! 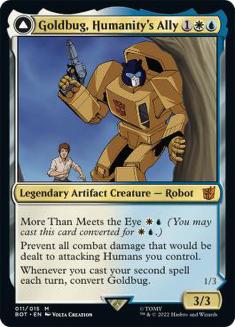 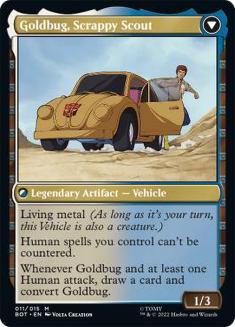 I have to be honest, I know absolutely nothing about Transformers, but I do know a thing or two about tribal decks. Goldbug is a very interesting commander to choose because both of his sides are incredibly attractive to a tribal deck. When he’s a Vehicle, he makes Human spells uncounterable. When he’s a creature, he prevents all combat damage that would be dealt to your attacking Humans. Flipping him back and forth is easy and can lead to some incredibly fun shenanigans. So, how do you build him?

Well, I have a few recommendations. For card draw, I adore the spell Mass Appeal. This spell makes you draw a card for each Human you control. With enough Humans on your battlefield, you’ll draw a heap of cards in a pinch.

My next recommendation is definitely going to ruffle a few feathers: Rick, Steadfast Leader. Yes, yes, he is from the infamous Walking Dead Secret Lair, but you cannot deny how good Rick is. He buffs your Humans and gives them your choice of two abilities! That is strong!

My final recommendation isn’t even a Human at all: Shabraz, the Skyshark! Shabraz is amazing in this deck for a few reasons, but my favorite is the mana ability. That’s right, it gives target Human flying until end of turn. In Goldbug, the majority of your creatures are Human! That is so dang good, I love it! While most Human tribal decks are Selesnya, I strongly encourage you to take a stab at Azorius with Goldbug, Humanity’s Ally. 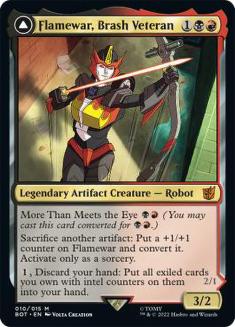 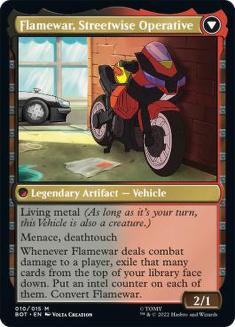 Flamewar is an interesting commander because when I saw him, the first thing I thought about was Prosper, Tome-Bound. Cast things from exile and get Treasure tokens. This is a bit different from what Flamewar does, but needless to say I was inspired. What if we make a bunch of Treasure tokens in this deck and sacrifice them to fuel Flamewar’s counter ability? The bigger Flamewar is, the more cards we exile from the top of our library and eventually put into our hand. Are you with me? Let’s see how we can brew him!

Since we will be sacrificing so many artifacts, I really want to run pieces like Disciple of the Vault and Mayhem Devil. These cards deal incremental bits of damage to your foes that add up over the game. Since you will be sacrificing artifacts to Flamewar’s ability (ideally treasure tokens), you might as well get some value out of it.

Another recommendation I have is Kami of Celebration. This cute little T-posing Spirit interacts with modified creatures and cards from exile, two things that Flamewar cares about. Not only does the Kami let you cast things from exile, but whenever you do, you can place a +1/+1 counter on target creature you control. This can be used to beef up your battlefield or give you more value with your commander.

My final recommendation is Akki Battle Squad. I love love love this card because it gives you an extra combat phase if you attack with one or more modified creatures. Flamewar becomes modified once you put a +1/+1 counter on him, which can lead to some painful combat steps and card advantage for yourself later down the line. Sure, it’s a bit odd, but it’s also fun to solve a deckbuilding puzzle! 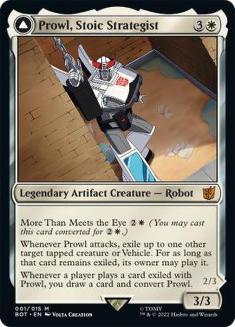 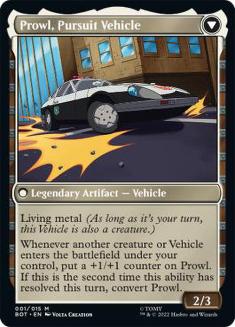 Prowl is an intriguing Robot to brew around, mostly because you exile your own creature or Vehicle or you can exile someone else’s creature or Vehicle. However, these exiled cards can be cast by their owners. In a weird way, Prowl serves as removal for others and value for you. When he transforms, he cares about Vehicles and creatures, getting counters whenever they enter the battlefield under your control. Because we are brewing Transformers lists, you know I have to focus on the Vehicles. Let’s Tokyo drift into my recommendations and see what we can do.

Let’s start with a guy who was made for Vehicle decks: Sram, Senior Edificer. Sram is a staple for any Vehicle deck because he provides consistent card draw. While white is getting better with its access to card advantage, Sram is a great, if specialized method of accessing this in a fun and thematic way.

My next recommendation comes in the form of Aeronaut Admiral. I love this creature because it grants all of your Vehicles flying! Evasion is nothing to sneeze at, and this can turn a fun theme deck into a brutal aggressive list.

Finally, we have Akroma’s Will. I know that this sounds a bit out of place, but I adore this spell in any deck that runs white. I call Akroma’s Will a kill spell in commander because it is brutal when cast during combat. All of your creatures gain a crazy amount of keywords and protection until end of turn. Simply crew your vehicles, move to combat, and then cast this spell for a game-ending play. You love to see it. 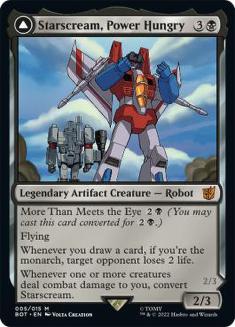 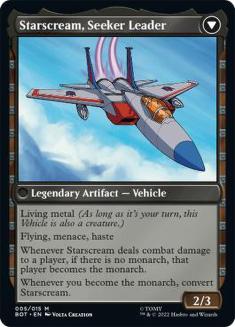 When I saw Starscream, I was initially puzzled. His Vehicle half introduces the monarchy to your opponent rather than yourself. When he is in his creature form, if you are the monarch and you draw a card, target opponent loses two life. Black has some interesting ways of implementing card draw, and I definitely find Starscream to be the most interesting Transformer out of the lot. So let’s see how we can brew this bad boy!

Right off the bat, I want to include every black monarch card out there…which aren’t that many. Pieces like Custodi Lich, Court of Ambition, Marchesa’s Decree, and Garrulous Sycophant are my favorites out of the available six. I don’t like relying on Starscream to introduce the monarchy, especially when it’s given to your opponent.

My next recommendation is the newly printed Sheoldred, the Apocalypse. This card seems perfect for Starscream because regardless of who the monarch is, you somehow benefit from it, whether it’s lifegain or life loss. In fact, Sheoldred was the first card I thought of when I saw Starscream. Another deterrent for your opponents taking the monarchy is Fate Unraveler and Underworld Dreams. All three of these cards make your opponents lose life. Is the monarchy really worth all of that?

My final recommendations are cards like Dread Presence and Phyrexian Arena. This deck craves consistent card draw, and these two cards do exactly that. The more you draw, the more life your opponents lose. Dread Presence triggers whenever a Swamp enters the battlefield under your control, while the Arena triggers at the beginning of your upkeep. Consistency is key, and Starscream lives for it. 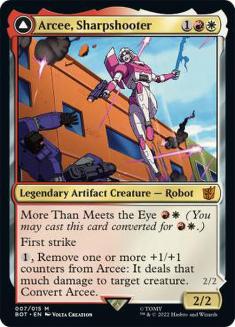 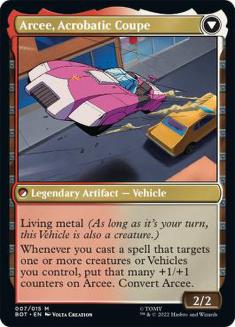 Lastly, we have Arcee, Sharpshooter: a fun and aggressive spellslinger Vehicle commander. To be honest, this is such a wild commander to me. It does a lot! Counters, noncombat damage, targeted spells, you name it. In a way, I thought about Feather, the Redeemed when I first saw Arcee. So, how do we take all of this and compile it into a cohesive list?

Weeeeeeeell, let’s start out with something a bit salty, Basilisk Collar. Fun fact: Arcee deals the damage to a creature when you do her mana ability, meaning that when she is equipped with the Collar, she has deathtouch, and the creature she deals damage to will die. It’s so evil, I love it!

My next recommendation is the criminally underplayed Showdown of the Skalds. This Saga is delightful because it does everything Arcee likes! You get pseudo-card advantage, which can allow you to cast spells that target your Vehicles, and it also gives out +1/+1 counters for each spell you cast during your turn. I absolutely love that. If you’re playing cheap spells like Shelter or Take Up Shield, casting multiple spells per turn is easily achievable and will give Arcee a bunch of counters.

Lastly, we have Manaform Hellkite. This card is bonkers good because it turns your noncreature spells into Dragon tokens with flying and haste! Not only are you giving Arcee counters to deal damage with, but you’re generating tokens with each cantrip cast! That is so cool! I love interactions like that. Who said Boros was boring? Arcee begs to differ.

More Than Meets the Eye

It’s always interesting to see how Wizards of the Coast (WotC) tackles outside IPs in card design. Whether they are Warhammer pieces, Godzilla reskins, or mechanically unique cards like the Transformers or Walking Dead cards, Magic is slowly wading into the pool of pop culture. Thai combination allows for unique brews and a fun way to introduce new players to the game.

Let me know what you think of my suggestions and if you are excited about these Transformers pieces to hit booster packs next month. As always, happy brewing, deckbuilders!