It’s been a while, but I finally got time to continue the Ultimate Standard Tournament. This week, Ghazi Glare tries to dazzle Boss Naya, plus a matchup of the “most hated” decks: Faeries vs. Jund.

What’s going on?
I am running a tournament matching thirty-two of the best Standard legal decks of all time in a single-elimination tournament. The idea is to find out if modern decks can run with the best historical decks. The event will play best-of-five matches, with two unsideboarded and up to three sideboarded matches. The decks chosen are a selection of the most famous historical decks, as played at the time.

Here are the brackets to date.

The decklists can be found here.

Where possible, I’m playing these matches out on Magic Online. It’s obviously not possible for some matches, of course, since many of these decks rely on cards that just don’t exist online. (Rishadan Port is a great example.) When necessary, I’ll end up playing these matches between my two accounts, but I’d prefer actual opponents. When I’m online and available, I’ll hang out in a room called UST. Just type “/join UST” in any window on MTGO.

Thanks for the Help!
Several people have helped play out matches. I really appreciate this. Keep it up!

If you have time, meet me online or just play out a matchup with your friends. Just use the decklists here, and please provide a complete record of the games — opening hands, cards played, relevant abilities used, life total changes, etc. It isn’t enough to say “Stompy smashed Sabre Bargain” — we want to see how, why and what happened.

I also keep the brackets in the Google doc up to date — in other words, once a match is played, I’ll note it as “(played),” and post the results after the article with the results goes up.

On to the coverage!

Boss Naya vs. Ghazi Glare
I had a pretty good idea how this match was going to play out. Sure, Ghazi Glare has some pretty good creatures, but Kodama of the North Tree is not quite the same as Ranger of Eos fetching Noble Hierarch and Scute Mob, or Knight of the Reliquary. Sure, Glare of Subdual is the new Opposition, but Boss Naya has Oblivion Ring and Ajani Vengeant — just plain better cards than were printed back then. Sure, killing Yosei is bad, but Naya has Path to Exile (although I had forgotten that Naya had just one.)

The other thing I knew about this matchup was that it would be G/W on G/W/R. As a judge, I hate seeing G/W mirrors, in limited or constructed, because the matches always go to time. G/W on G/W tends to stall, and the games are rarely fast unless one side is blown out.

I’m going to try something new — I’ll add a table with the two decks side by side. Let’s see if the software I have for creating it and shipping the image to Craig works, and if the result is still legible. Here’s the image: 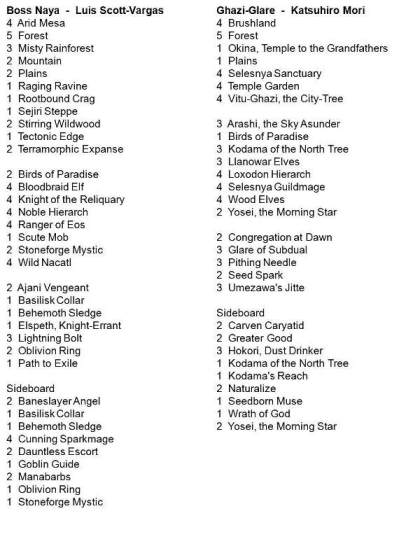 The first game went pretty much according to my expectations. Both sides opened with mana creatures and developed their boards. Pretty soon, both sides had their Hierarchs in play. Naya had Noble Hierarchs. Glare had Loxodon Hierarchs. However, Naya also had Bloodbraid Elves and Rangers of Eos — and the card advantage those produced was crushing. Glare did get a Kodama of the North Tree in play, but by then Naya had a giant Knight of the Reliquary equipped with Behemoth Sledge. It traded with the Kodama, and two Loxodon Hierarchs. (In this case, at least, the fact that damage no longer stacks cost Glare a couple of creatures.) It didn’t matter — Naya also had Ajani Vengeant with six counters and climbing.

Game two started as more of the same. Naya soon had a Wild Nacatl crashing past Wood Elves, and turn 5 it dropped an O Ring on a newly cast Glare of Subdual. However, a Seed Spark got Glare back, along with two tokens to tap thing with Glare. Tectonic Edge for Naya killed the first Vitu-Ghazi the City Tree â€”Â but the second started churning out tokens, and eventually Glare got a Hierarch into play and started beating. This time Yosei showed up and stayed in play, until Naya conceded. It was a long, hard fight, and Naya had a slow start, but Glare pulled it out quite legitimately.

I had decided to play at least four presideboarded games, simply because we were rusty with these decks and unsure of the matchup.

Game three, Glare showed something that I should have paid more attention to — the fact that Glare has its own busted cards. This game, Glare opened Forest, Llanowar Elf, turn 2 Wood Elf, turn 3, play Umezawa’s Jitte, equip to the Wood Elf and attack on turn 3, then use the counters to kill Naya’s two mana critters. Naya never did recover, although it did drag the game out. The Wood Elves continued to gain counters, and the counters were removed to kill everything up to and including a Stirring Wildwood.

Game four was really long. By end game, Naya had nearly every land it had in the graveyard, with nothing left in the library but a couple fetchlands with nothing to fetch. Eventually, a massive Knight of the Reliquary with a Behemoth Sledge smashed through for the win. Glare drew a lot of cards, but not a Seed Spark or Glare of Subdual.

Boarding was fairly simple. Glare took out the Arashis and the Congregation at Dawns for the Naturalizes, the Wrath of God and the other Yoseis. We debated bringing in Greater Good, but the biggest concern was Cunning Sparkmage, not getting a lockdown. Naya took out Lightning Bolts, Behemoth Sledge and a Birds of Paradise for four Cunning Sparkmages and the other Basilisk Collar. Naya toyed with the Baneslayers, but had little problem winning, provided it could keep Glare and Jitte off the board. Flying fat did not seem to be the answer. (If Naya had brought in the Baneslayers, Arashis would have come back in to deal with them.)

Post board, Glare put on a show. It kept getting hands that played mana acceleration into Loxodon Hierarch and a Jitte. Jitte destroyed Naya’s 0/1s and even 3/2s. When it didn’t get Jitte, it got token producers, lots of mana, and Glare. Pithing Needle also played a huge role. Pithing Needles named Raging Ravine, Basilisk Collar, Ajani Vengeant, and Cunning Sparkmage at various times. When Naya found an O Ring to solve one of those problems, Glare would find a Naturalize or Seed Spark.

The final game that mattered had Glare with a lot of mana, many tokens, and Selesnya Guildmage in play. Glare had eight mana in play. Naya had traded everything besides land the previous turn. Naya ripped Ajani Vengeant, and had to try frying the Guildmage — but the opponent was not stupid enough to let that work. He used the Guildmage to pump all his creatures twice in response, and the Guildmage lived. The next turn the Guildmage pumped all the tokens, and the counterattack was lethal.

Faeries vs. Jund
Once again, I had help on this matchup, thanks to Chris Najmi and friends. I did play a few games in this matchup myself, and I generally agree with the outcomes and reasoning. However, I’m going to simply cut and paste Chris’ commentary:

“We played a best of seven with the first three unsideboarded, and any subsequent matches sideboarded. Life totals will be (Jund-Fae)

Game 2: Fae on draw, Jund on play. Fae is on the ropes for the whole game.

Fae concedes, can’t get there.

Aside: I’m not 100% certain about this line of play; I think that there was another card in hand, but if there was I didn’t write it down. I didn’t play Siege-Gang because I didn’t have a second red source. I didn’t Bolt the Clique so that I’d have mana for Sarkhan, if he let me keep it. He ended up taking nothing, since he had Sprite for the Bolt, and it wasn’t worth letting me draw into something he couldn’t Spellstutter.

Overall, Jund takes the match 4-2. Fae seems to give you more wiggle room to outplay people… but the trade off is the preposterous power of cascade. Bituminous Blast and Bloodbraid Elf are insane in this matchup. Putrid Leech is even better here than in the UW/Planeswalkers matchup in the current Standard. Fae has only a handful of ways to kill it, and none of them are particularly appetizing.

Thanks for the assist!

Until next time.
PRJ
“one million words” on MTGO