Wow is there a lot going on in this deck. This is another one of those
rogue Modern lists that you can’t help but be impressed with. So many
moving pieces coming together to form a cohesive machine.

The core of the deck–Faithless Looting, Cathartic Reunion, Goryo’s
Vengeance, and Griselbrand-should be familiar. We know that combo is
incredibly powerful due to its speed, but it suffers from a lack of
resilience since it’s vulnerable to graveyard hate, discard spells, and
counterspells while needing to assemble a lot of pieces in a short time
frame leads to a high fail rate.

This list sacrifices some of the explosive power of Grishoalbrand with
support cards that make it more robust in the face of disruption.
Bloodghast is the key piece here, giving you a recursive threat that can
steal games but also the most common card to sacrifice to the second
element of the deck: 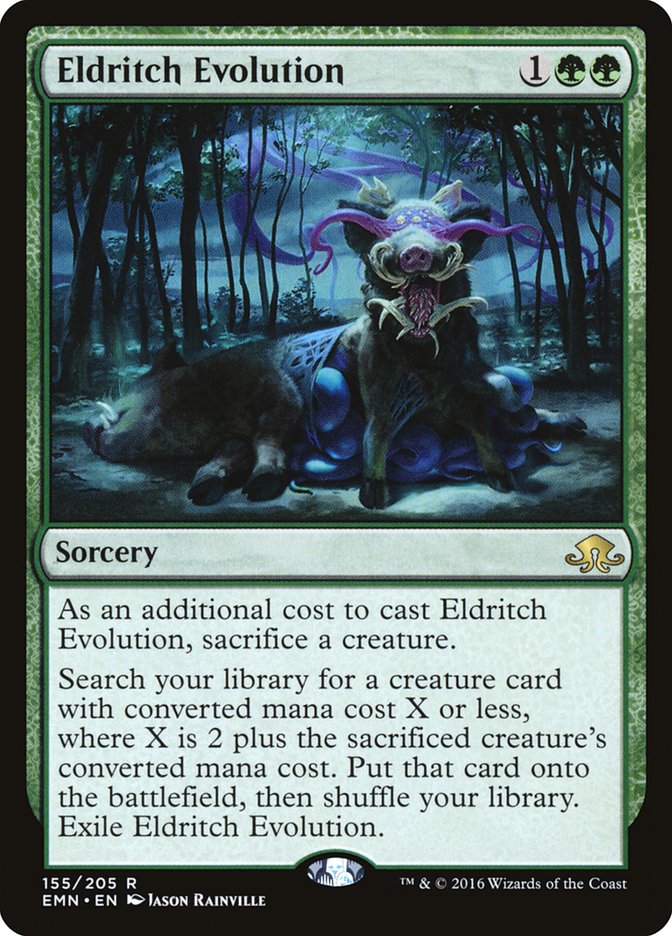 Typically you’ll tutor for Necrotic Ooze, which can then gain the abilities
of Griselbrand and Borborygmos Enraged for a typical Grishoalbrand kill.
There’s also a singleton copy of Razaketh, the Foulblooded, which combines
nicely with Bloodghast to let you assemble this quick rather quickly.

Noose Constrictor is the other enabler that lets you pitch your reanimation
targets in the early game but also synergizes with Necrotic Ooze and
Griselbrand for some combo kills of its own. That it’s a creature lets you
have some games where you go on the beatdown against a card like Rest in
Peace.

That’s also the role Tasigur, the Golden Fang looks to serve at first
glance, an efficient attacker when combined with your card filtering, but
it also synergizes perfectly with Eldritch Evolution, offering you a way to
jump the curve to your heavy hitters while almost entirely avoiding the
graveyard.

The last part of the deck is the dredge element. It lets you fill the
graveyard for Necrotic Ooze or Goryo’s Vengeance while potentially
providing a needed creature to sacrifice to Eldritch Evolution or in the
case of Life from the Loam, lands to discard to Borborygmos Enraged’s
ability. Much like in the Dredge deck, those cards provide velocity to a
non-blue combo deck.

Magic is so hard, and deckbuilding is among the most difficult parts of the
game. There’s a reason most players simply tune an existing list, and
that’s because finding and developing a new shell is too daunting. But
Modern seems to bring out the brewer in everyone, with so much untapped
potential. This list draws inspiration from known decks but before seeing
it I would’ve scoffed at the notion of combining Goryo’s Vengeance and
Eldritch Evolution. And yet it works.