Zero, as in “not a whole bunch?” True indeed. My Regionals deck bears the title proudly. But let’s back up a little. It started with this pile of mush that accidentally won a PTQ:

…but after a mediocre 3-3 performance, I took stock and examined the glaring holes. You may think there are holes so large that “glaring” doesn’t begin to describe the morass, but I don’t because I’m married to bad decks that I created, or at least co-created in this case. So what if the deck won a PTQ all by itself? It didn’t for me, thus, redo.

The most obvious weaknesses were as follows:

Not enough early pressure.
A little too much Bob pain, though not really.
A difficult curve to well, curve out.
Creatures that just don’t do enough on their own, despite lots of synergy.
I wanted some haste very freakin’ badly.

Addressing the first problem is easy: add more lil’ guys. There are plenty of one- and two-cost beaters with relevant abilities to toss up in. The on-color guildmages, Skullsnatcher, and even Lurking Informant vied for coveted two-slots, but none fit the bill… until Dissension and Rakdos Guildmage.

He’s on color (well, half of him is), adds to the early pressure, helps the curve, does three things very well: kill stuff, make guys and wear Jitte, and the final piece… he offers guys with haste. The first time he hit play and got all activated ability on my ass, I wanted to pleasure him sexually.

He rarely seems worth a removal spell from the opponent, who may or may not prefer to wax Bob poetic, but if this guy sticks around, he’s liable to wreck havoc in many different ways, all of them somewhat silly.

Adding three because that’s all I got in two boxes (and I had to purchase two as singles – collation 4L!) allowed me to eliminate a few large bodies that would help make Bob a little less scary. The next idea was why not add a few Red cards? Since I’m going to toss in a few Red sources for his haste ability, why not delve a little deeper?

Dissension offers superb options, all of which do exactly what I want them to do.

Avatar of Discord adds insane early pressure that must be quickly dealt with, Lyzolda helps to lower the curve and acts as both a removal spell and Jitte negator, and finally, Hellhole Rats throws haste into the mix without losing the discard theme. As a very nice bonus (unlike Blazing Specter), when this guy resolves, he gets a card, and can even toss a few points of love into the mix. And he has haste. Sickness.

I can’t think of a start much better than that – three cards gone. Turn 5 is where it gets interesting. If Shinobi and his haste-like skillz are around, using him to ninja either of the Rats seems quite unfair because it is. The opponent’s hand should be nothing but a distant memory at this point, and he’s facing actual damage to boot.

Adding a couple copies of Phyrexian Arena is Jonathan Choy technology, and while he cut two Bobs to do so, I believe that having six cards devoted to card drawing aids the overall strategy more than just four. Also, the synergy with Avatar makes his discard requirement almost academic. She said.

I think the side should present four slots of uber technology in the form of Magnivore. While I don’t expect a ton of Wildfire, I do intend to make peeps discard a lot of stuff, and even if he only comes in as a hasty 3/3, that’s a chance I’m willing to take. I think. Still, ultimate nutz versus ‘Vore, but really, that’s awfully cheesy.

You may be asking why I pervert my manabase just to play Putrefy. Then again, you may realize how good that card is. It’s worth the potential pain to not have to use my Jitte as a Wasteland, and if Bottled Cloister does show up in Rakdos builds, well, heh on them and Naturalize in the board for other randoms.

Additionally, Bennie Smith emailed me out of the blue and said “I’m breaking Regionals with dredge, wanna come?” Naturally, one word caught my eye: “come.” He attached a decklist, which I hurriedly pasted, shuffled and dealt. After about twenty games, I realized that if Avatar of Discord isn’t in a dredge deck, the deck just ain’t dredge.

So I took my newfound Nearly Mono Black in Standard with Red too creation of love and dredge.dec to Crossroads for the Legacy/Playtest session.

Both got killed to death.

After being smashed about the face, neck, chest, and breast area with U/W control, I am prepared to declare it the best deck in the format. No, not the forsythecast version with hella lil’ birds and doing stuff during upkeep, I’m talkin’ ‘bout a list like this, which is only a guesstimate after watching it kill me for hours and playing a few times to verify that I’m not that bad at Magic:

I may be missing a card or three, and Azorius Herald really wants to find a place up in, but dayum if this deck isn’t Invasion Block tempo’d out.

I’d play a turn 2 guy, which would meet Remand or Mana Leak if I was on the draw, and then my turn 3 guy probably wouldn’t resolve either, although sometimes it would just so I’d drop another guy and make Wrath slightly more unfair than it already is. This is akin to playing turn 2 Meddling Mage and Repulsing your opponent’s guy and then Excluding it. Yep, game’s pretty much over on turn 4.

Anything that resolved after Wrath was introduced to Condemn or additional Wraths, with the Arbitratin’ Sumbitch and Hokori usually throw in just to slow the game to a halt, but only for me. Do you have any idea how badly those guys hose dredge? Sure, dredge away, son, but you ain’t likely to ever have enough mana to cast d*ck, although if you do I might let it resolve just to Condemn it for the sheer fun of it.

A turn 2 Jitte is pretty good against control decks with no bounce, but Azorius Guildmage her own damned sexy Blue self solves that problem in so many ways that it’s silly when she simply struts her baby Blue ass and attacks past a creature wearing a Jitte. Of the dozen or so games I resolved a turn 2 Jitte, I think I got counters once. Then Mikey simply dropped Yosei and sighed for me and my battered sense of self-worth.

Pardon me for noticing, but in the artwork she appears to be Black, but she’s physically Blue, and can be played with White mana. What the hell is going on here?

Reign in Cavotta, like, right now! That guy’s out of control!

The deck, because it could, or maybe it’s just Mikey because he wanted to, pounded the living repeated nuts out of Brian Smith and his latest bad Johnson: U/W lil’ birds show you stuff in my hand.dec that he’s been writing about ever so loudly on some other site.

I added different cards, different colors, reanimation spells, Simic Sky Swallower (heh), and it still got owned like anyone KFed ever macked. Of the few times I hit the perfect curve and made Mikey’s hand smaller than Ashley Olsen, the games lasted longer, and sometimes I won, though that was mostly due to an abomination in the law of large numbers, which basically states that if a coin comes up heads 100 times in a row, bet tails ‘cause it’s due! This theory has won many players millions of dollars at roulette wheels and craps tables around the world. Try it out the next time you’re in a casino!

Wrath, Yosei, off the top is good, especially when you’re down to your last draw with something like 16 mana on the table and peel… Meloku. I had a Jitte’d Rakdos Guildmage with four counters and Hellhole Rats. Mike had bunches and bunches of lil’ birdies.

Lurking Informant woulda put and end to that noise, yo. Um, okay.

I got bitched like the new guy in C block who swore no one would ever get to him so eleven did, and was back to square one, with NMBIS and dredge both sitting in time out and thinking about what they did wrong, which was merely try to beat U/W.

Not Your Father’s Mono Black 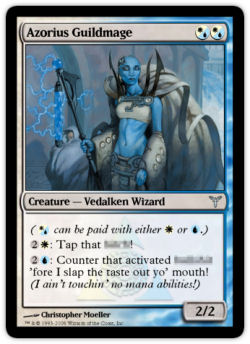 Damnit, if that Blue hooka has to exist, I gotta get me a lil’ sumthin’ sumthin’. Ain’t no way I’m missin’ out on that “tippity-tap, counter that activated bullsh** ‘fore I slap the taste out yo’ mouth!” that she brings to the table.

Grotesque is awfully better than Hyppie on turn 3, since he, well, gets a freakin’ card without making me waste an entire turn even if you burn him anyway (and you will), while also offering additional love via the attractive ninjas, some of whom actually help me instead of only hurting my opponent.

What can I say about Herald that hasn’t already been said? I guess you guys already figured out that a 2/1 unblockable guy who gains you four life on impact is pretty good. He’s kinda, gee, oh, a little better when you can either make sure he gets through – say, wearing a Jitte, or, I dunno, to make a ninja say “hells to the yes, and gain me some mo’ life next turn, dawg.” Yeah, he’s, say it with me: “some good.”

Turn 2 Rat.
Turn 3 Grotesque.
Turn 4 two sexy guys to ninja in Deepie, though the Rat looks nicer, since you can cast him again this turn omg lol combomania and card advantage extraordinaire!

Every once in a while, that even happens.

This deck can still be outtempo’d and has a noticeable lack of fatties, but I haven’t tested at all so you’re preaching to the choir who isn’t about to listen.

Okay, for those who like to keep it simple, repeat after me:

“Your husband is so handsome, and has a cute butt.”
-A 54 year-old woman at the last school function, uttered in confidence to my wife 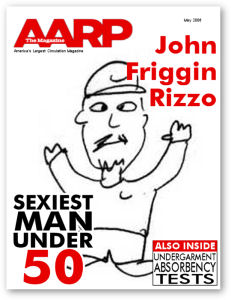 Since I’m likely to be too busy to do much any actual playtesting this week, I believe I have found my newest and bestest buddy, and big toe…

The name “Zero Confidence” originates from my complete lack of confidence in the deck’s ability to do, well, well at all. I could just play Nearly Mono Black In Standard (after all, it won a PTQ!), or the Red version, but I took them apart and I’m lazy.

Thus, I’m driving (er, Chet is), two and a half hours and throwing down at least $25 American just to play a deck in which I have Zero Confidence and haven’t, nor most likely ever will, playtest.

Hopefully, I’ll get paired against bad decks early on and pretend I’m competitive for awhile, or at least get off to a rousing 0-2 start and then face the bad decks, which could result in a semi-respectable finish.

Either way, if I were you, I’d net deck, but I’d make the deck I netted U/W, and not that little whiney “look, I’m making tokens!” penis-impaired version; run the man-sized “Yosei and his Black/Blue/White beeyotch for the win.”

Or, if you think you have what it takes to be the next Jonathan Choy, then step right up, play Zero Confidence, and win yourself a blue envelope.

But if I were you…