It’s a hell of a thing trying to write an article in the middle of a house full of Magic players. Imagine for a moment what that might look like . . . and then factor in the atmosphere of Pro Tour preparation. What you have is a chaotic vortex of declaration and analysis that continues to intensify until a crescendo is hit somewhere around 4:00 AM the morning of the first day of tournament. A wiser man may have asked for an extension on his deadline or abstained from the burden of writing without exposing important information by simply taking a week off. But in true Gonzo fashion, here I sit on the other side of the world again (Spain this time) with a few moments to myself and a deadline looming. 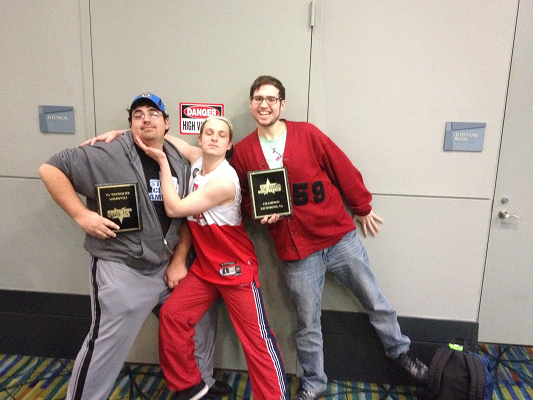 While G/R Monsters was enjoying its opening weekend with Born of the Gods at the SCG Open Series in Nashville, the three charming gentlemen you see above were busy having their way in Richmond with what was quietly one of the more enjoyable events I’ve participated in recently. There is no limit to the amount of fun you can have battling with friends on both sides, and the SCG Classic Series is a great way to keep Team Sealed alive while addressing some of the coverage-related concerns with making it the focus of a weekend. Our pool was very powerful, and building had its tough spots. But when the dust settled, we had a configuration of decks that represented some of the most powerful archetypes in Theros/Born of the Gods Limited.

The deck we gave to SCG invitational champion Max Brown was completely absurd and did its best to imitate the G/R Monsters deck in Standard with cards like Sylvan Caryatid; Courser of Kruphix; Polukranos, World Eater; Stormbreath Dragon; and Xenagos, God of Revels. With Max on my left, it was easy to focus on my own game because he was just annihilating his opponents. As long as I wasn’t too distracted by their complaining, we were good to go. I was unable to stop myself however from pausing to watch the following sequence from him in the middle of the day:

On my right was Ben Friedman, who earned his Twitter moniker of @40cardfriedman by playing his R/W deck to a flawless record until the tournament finals, where he crushed his Draft match with a similarly aggressive R/U deck. His Sealed deck had both an Ordeal of Heliod and an Ordeal of Purphoros so there were definitely some free wins to be had, but in the end I was incredibly pleased to be able to hand a quality player a very powerful but deceptively complicated aggressive deck and watch him wield it to its maximum potential.

The most interesting moment of the deckbuilding process came when building Ben’s deck because initially we gave him the Stormbreath Dragon. After the rest of the deck came together, I determined that there should only be sixteen lands, and suddenly the Dragon was simply not at its best anymore. We proceeded to send the third mythic in our pool over to Max, who to his credit did a very good job of muffling his giggles until after we had finished registering our respective decks.

Last but definitely least was my deck. With red split as a support color for both green and white, I took the leftover colors of blue and black and set out to build a control deck capable of stealing some games in the middle seat while making sure to have some serious play against any aggressive strategy. In the end, the U/B deck had some nice spells in the form of two Griptides, two Voyage’s Ends, and two Nullifys, but it lacked the hard removal necessary to really put the archetype over the top. I started the tournament off 0-3, but luckily we had purchased some bungee cables at a local hardware store on the way to the convention center. After quickly lashing my legs to my teammates, we were off to the races. I didn’t lose again for the rest of the day.

Winning the tournament was chock full of sick plays and highly intense three-headed decision making, but what really stuck with me were the lessons I learned about how some teams like to position decks with regard to the middle seat.

Disclaimer: These are opinions, not facts, but if they didn’t continue to occur and be relevant, I wouldn’t even waste my time writing about them. In addition, I believe that how different archetypes match up with one another is the biggest potential edge available to a team outside of sniping free information from the communication of careless players.

If I were to take these as hard and fast rules then, the strategy I would employ goes as follows:

1. Give your worst deck to the best player and put it in the middle seat and then give your best decks to the players that are most comfortable with them and put them in the outside seats. While putting your best player at a significant disadvantage may seem like a losing strategy, the truth is that sometimes that player will steal wins from very strong “middle seat” decks with either high-quality play or just dumb luck. Every time this happens, it feels as if winning two matches out of three is a forgone conclusion. Beating their best cards with our worst cards and then looking toward the other two matches for a single result? Sign me up for that every time. You mean to say your best cards beat our worst cards? Shocker. Let’s see how my two bomb decks are doing over here.

2. Make sure that the awful deck in the middle seat is built in such a way that it isn’t going to roll over to an aggressive strategy every time. In lieu of an insane bomb deck, the next most likely scenario for the middle seat is a hyperaggressive deck that will finish quickly. Do not make this a matchup you fold to; if your middle seat opponent is going to blow you out of the water, make sure they have to use as many of the twelve rares in their pool as possible to get it done.

I will admit that some players whose opinions I respect very much have made convincing arguments against devoting any kind of energy to trying to game the system of deck placement in these events. While it is true that these strategies are very hit or miss, I would like to reiterate that gaining an edge as a result of archetype matchups is a very huge deal in Team Sealed. Even if this only works less than 50% of the time, the results are so high impact and the cost so minimal that it seems foolish not to try it out.

This time next week I will be returning to the Team Sealed arena for Grand Prix Barcelona to battle once again alongside Max Brown. His good friend Bryan Matthew will be tagging in for 40-Card Friedman to complete our trio, and I can’t wait to unleash some more Theros/Born of the Gods Limited knowledge on our unsuspecting opponents. I wanted to include some card rankings from our super team’s testing leading up the Pro Tour, but unfortunately Ari Lax said that since my article is scheduled to come out at midnight before the first day on Friday that is “completely and utterly acceptable.”

But I’m not going to let some silly Ari Lax stand in the way of good content, so here’s my compromise. Post your picks for the best common in each color in Born of the Gods, and sometime on Saturday I’ll begin to leak some of our conclusions as the information becomes less relevant to players still competing for $40,000.

In addition, I give you this embarrassing picture of Ari in his boxers: 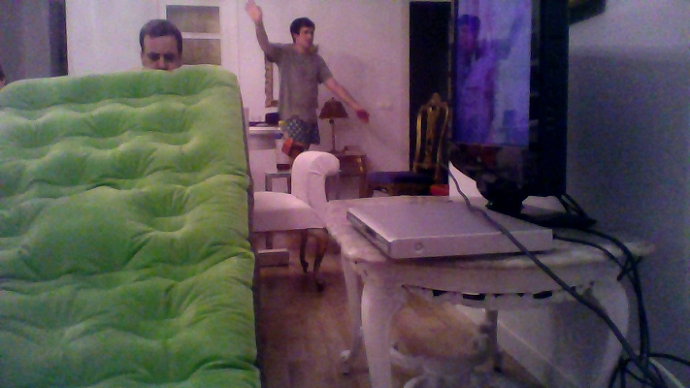 Don’t say I never did nothin’ for ya!