When I wrote my Top 50 Gold Cards article for Wizards, many newer players thought that Psychatog did not deserve the #1 slot. Historically, Psychatog absolutely deserves the title of Best Gold Card of All Time. However, the near-unanimous puzzlement amongst newer players over the placement of Tog got me thinking – how good would Psychatog be if it were Standard legal right now?

First, let’s set a few ground rules. This is purely a theoretical discussion. The format I envision includes the entire Kamigawa block, the entire Ravnica block, and 9th Edition. Coldsnap is not legal, and no other cards are being added (or removed) from the format. This is the format as it exists right now, plus Psychatog.

Let’s examine what Tog loses in Standard. Tog loses any Madness cards (most notably Circular Logic), flashback cards (Deep Analysis), and early-mana reducers (Nightscape Familiar). There is no Wonder to give Psychatog evasion, no Upheaval to ramp up towards, and much less instant-speed card drawing (no Fact or Fiction or Thirst for Knowledge).

So what would a Standard legal Tog build look like? It would definitely be Black and Blue. I also believe that a successful Tog build would run Green for dredge cards, just like in Extended – most notably Life from the Loam and Golgari Grave-Troll. While there isn’t a Putrid Imp in this format (which would enable a first-turn discard for dredge), there are many viable spells that could be played in that slot. Compulsive Research, Drekavac, Drowned Rusalka, Blackmail, Ideas Unbound, and Thought Courier are all in-color playables with which to get dredge cards into the bin (though Ideas Unbound appears a lot more seemly than Drowned Rusalka).

What else would the deck run? Most likely, we’d want some cheap countermagic. Remand and Mana Leak fit that bill, so in they go.

This gives us 23 spells so far. We’d want a fairly good mix of lands in the deck, and we have quite a few to choose from. Llanowar Wastes, Underground River, Yavimaya Coast, Breeding Pool, Watery Grave, and Overgrown Tomb all would vie for slots against Forest, Island and Swamp. Quicksand would probably have a place in the deck, as would Dimir Aqueduct, Simic Growth Chamber, and Golgari Rot Farm. The nature of the Karoo lands combo well with the natural abilities of Psychatog, so they might be attractive options.

What else would Psychatog decks run? There are many other possibilities. So far, we have no evasion in this deck. Would we run bounce (Boomerang) to clear the way for Tog, or add in Jittes? Would we want to build the deck around Gifts Ungiven (to feed the Tog), or would the dredge engine be enough? Meloku seems like he’d be a good fit in a Standard Tog deck, as you’d be getting +1.5/+1.5 added to the Tog each time you made a 1/1 creature.

How would Psychatog deal with Pithing Needle? Would a well-timed Needle shut a Tog deck down until the Tog player found a bounce spell? Would Naturalize be in the deck? Would there be removal (such as Putrefy, Cruel Edict or Rend Flesh)? How many other creatures would show up in the deck?

I’d love to see you, the reader, come up with your best Standard-legal Psychatog deck in the forums. The rules are simple – build the most viable Psychatog deck possible, using the format I described above – Standard as it exists today, with the sole addition of Psychatog. Your deck can be any color (or combination of colors). You can run any cards you want, as long as the deck is tournament legal (excepting Psychatog, of course). Please include a sideboard for the deck – this is important especially if your build uses Research / Development!

What will the winner of this contest get? Not only will you get the satisfaction of having participated in this theoretical argument, but you’ll also get four brand-spanking new copies of the DCI Foil Psychatog. All entries must be made on these forums, and I will be the sole person who determines the winner of this contest. Results will be posted in my selecting 10th Edition article on June 30th (a week from this coming Friday), and all entries will be accepted up until a winner is announced!

Happy building, and I can’t wait to see what y’all come up with!

(And don’t forget, if you think Psychatog would not be the bee’s knees in Standard right now, sound off in the forums!) 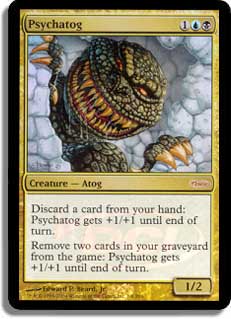