The one thing I’d like to point out is that decks like Monsters are not interested in playing a “small ball” game. By that I mean that cards like Duress and Magma Spray, while generally effective in the matchups you want them for, are not powerful enough to be worth playing. Monsters operates on a specific curve, and while one-mana spells are typically there to fill spots on your curve, between Temples and expensive spells Monsters doesn’t really have that luxury.

Additionally, those cards aren’t powerful enough. Sure, you might be happy that you got to Duress their Supreme Verdict (which might have won me a game) or Magma Spray their Voice of Resurgence, but you should be looking for ways to proactively fight those cards by ignoring them with planeswalkers or going over the top of them. There is the option of playing something like Anger of the Gods as well. Cheap one-for-one answers are not what you want, as they do not impact your matchups enough to be worth it, at least in a deck like this.

For those playing G/B Midrange in Modern, I’d like to give you the same advice. Find some powerful sideboard cards that actually make a difference in the post-board games rather than playing more of what you already have in your maindeck.

As for Legacy, I was actually going to play MUD, but it was more convenient for me to play Sneak and Show, so I did. Perhaps I’ll bust out MUD at some other point, as I think it’s an underplayed deck relative to its power level, and a lot of the issues that people have with it, such as inconsistency, can be fixed.

I’ve played Sneak and Show one other time and made Top 8 of the tournament, plus Todd Anderson has been on an absolute tear with it, so I decided to run with it.

My list was very similar to the one I played at the Invitational in Indianapolis last year, although I had one minor change: 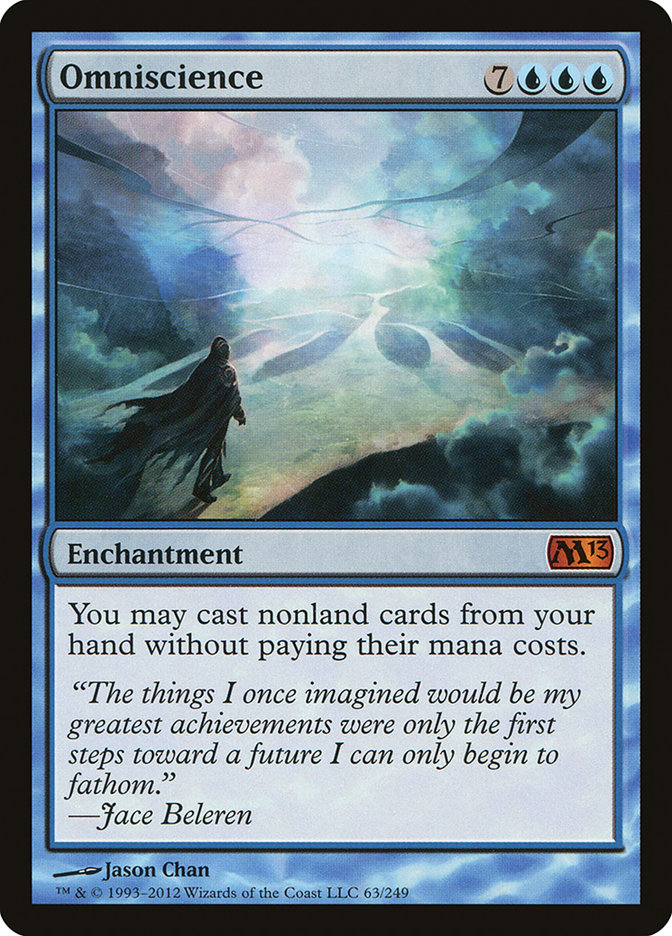 I considered the card for Indy but couldn’t pull the trigger. It’s reasonable in the mirror match, as it allows you to actually cast Show and Tell without fear. Sneak Attack can do the same thing, but they usually expect that and will try to Spell Pierce you down to zero mana in order to get the first attack step with their big monster. If you can Show and Tell with zero mana, they might allow it, hoping their Griselbrand will be able to find them a Force of Will or Spell Pierce for your Lotus Petal. With Omniscience, you can cast Emrakul, take an extra turn, and annihilate their board.

Omniscience also gets around a lot of hate cards, such as Karakas, Mangara, and Blind Obedience (which I actually played against!). Omniscience won me three games that I probably wouldn’t have won otherwise. Curiously, if the best Show and Tells are the ones that include Omniscience, perhaps I should have been playing a different version, but I’ll get to that later.

The rest of the deck was fairly standard. I didn’t miss the basic Mountain, so that was nice. I shaved the Intuition that I had in Indy but desperately missed it in the match that knocked me out, as I was killed by an Elves player that never tried to combo, they just attacked me with little men. The games went until turn eight or so, but I could never assemble monster + cheat spell.

Spell Pierce continued to be great and while I didn’t play against U/W Miracles at all, I don’t think I would have missed Todd’s Jaces either. They seem super-inbred and would much rather they be an Intuition or two.

The only other real point of contention besides the Omnisciences in the sideboard were the Blood Moons. My plan against Delver decks (and decks like Shardless BUG) was to Blood Moon them. In theory, this gave me another must-counter spell, making me more threat-dense. Ideally, I would have played a pair of Simian Spirit Guides to go along with them in order to make turn-one Blood Moon a more realistic possibility while also giving me more ways to play around Daze and Spell Pierce.

In reality, Blood Moon spread me too thin. If they already had a Delver, Deathrite Shaman, or Tarmogoyf in play, Blood Moon wasn’t great. Perhaps the Simian Spirit Guides would have helped in that regard, but they were $4 each, and I had a playset sitting at home already, so buying them did not seem worth it. In retrospect, perhaps I should have bought them.

Instead, I’d like to see at least a pair of Misdirections in the sideboard. Rich Shay’s BUG Delver appeared to be relatively popular, and I lost to it in round five, albeit to a judgment call. I would have been much happier with Misdirections than Blood Moons, that’s for sure.

Through the Breach is a reasonable sideboard card that can get around some of the opposing hate cards, but it is mostly a worse Omniscience. With Omniscience, I didn’t feel the need for Through the Breach even if it is another threat that works well with Boseiju, Who Shelters All.

Another interesting option is one that was proposed to me by Adam Fronsee, which was used by 13th place finisher Jeremy Garfinkel, which is a couple maindeck copies of Fire // Ice. It’s a maindeckable removal spell that cycles and pitches to Force of Will, so if you’re in the market for that sort of thing, you should try it. I like the card, but don’t think it’s necessary.

After playing Sneak and Show again, the real question was, “Does this deck do something specific that is necessary or is there a better option that does similar things?”

Since I was already looking at Omniscience as a way of fighting hate, did that mean I was a bad Omni-Tell, Hive Mind, or even Hypergenesis deck? All signs seem to point to yes.

There are no Spell Pierces because you have Pact of Negation to back up your combo, more tutoring power with Intuition, and your backup plan of casting Hive Mind is pretty easy because of Grim Monolith and Ancient Tomb/City of Traitors. There are no Lotus Petals because the other acceleration fits your game-plan better.

The downside is that this is often a three-card combo whereas Sneak and Show is a two-card combo. However, the resiliency to basically any hate card is fantastic.

Well, Hypergenesis cares very little about any of those things.

It’s true that Hypergenesis doesn’t interact much, doesn’t play filtering spells like Brainstorm, and opens you up to other hate cards like Chalice of the Void, but those aren’t necessarily downsides. You don’t need Brainstorm, Chalice isn’t widely played, and interacting with (and potentially outplaying) your opponent is overrated.

As for Standard, Naya Hexproof won the Open, which is pretty cool. G/W Hexproof still might be the better option though.

I’m a firm believer in the red splash for black devotion decks, as Rakdos’s Return is another way to gain reach plus it gives you a solid edge in the mirror match which other versions are lacking. The Mono-Blue Devotion matchup is tricky if they play two or more copies of Hall of Triumphs in their 75, but going back to Nightveil Specter makes that matchup a little more manageable.

I did a video on G/B Devotion this week, but G/R looks like the stronger candidate. Xenagos, the Reveler is a great way to fight Desecration Demon and U/W Control, which is basically all the deck needs considering Setessan Tactics covers a lot of the other bases.

This weekend I’m going to be playing a Modern PTQ with either Omen Scapeshift or Kiki Control. Initially it was going to be Kiki Control for sure, but I think I’ve found some nice technology for Scapeshift so I’m eager to try that out. I’ll hopefully have the deck together on Magic Online shortly and will be able to see for myself. Expect next week to cover either one of those archetypes in depth.

As for M15, we’re entering the tricky portion of my return to writing following my stint at Wizards of the Coast. I’ve played with these cards and the entirety of Huey, Dewey, and Louie, so don’t expect me to be doing any set reviews or answering any questions regarding specific cards and their context in Standard. It would be unfair for me to share what I know, but I look forward to watching you guys discover all the awesome things in these sets in the same way that I did!