The notable brewer and deckbuilder scours the card-searching database each time an idea for a deck strikes him. Hoogland had more than a dozen creatures at the ready to be tutored up with Chord of Calling a day after the card was spoiled for Magic 2015. Some creatures were obvious, others basically forgotten.

For Hoogland, a Chord of Calling toolbox shell would be considered tame. His first Open Series Top 8 came with a BUG Control deck featuring four copies of the legendary Zombie Elf Glissa, the Traitor in a time where Delver of Secrets and Huntmaster of the Fells ran rampant on the metagame. His first Legacy Top 8 came with a Deadguy Ale build including Lingering Souls alongside Thalia, Guardian of Thraben and Tombstalker beside Dark Confidant.

His success comes from decks often requiring more than four words to label, often three or four colors. Open Series commentator Patrick Sullivan playfully compares his decklists to trade binder fodder. Where some play Brainstorm and Force of Will in Legacy, Hoogland sleeves up Life from the Loam and Chalice of the Void. His Standard card advantage strategy involves Courser of Kruphix and Underworld Connections instead of Sphinx’s Revelation. Attacking for two really isn’t his thing. He prefers swinging in with flying 20/20s or ultimating Planeswalkers. But that’s how he likes it. 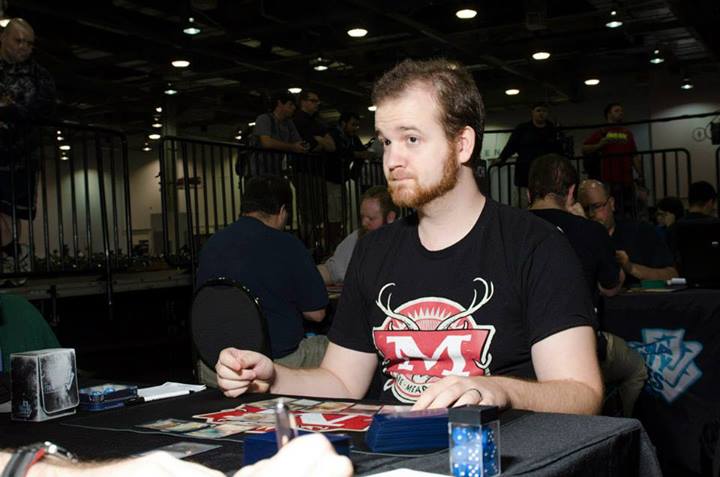 “When I first started playing tournaments I never found the popular decks that interesting or saw them utilizing intricate lines of play. In a game as open and complex as Magic, there is always something interesting to do and some sweet card to build around… like Yeva, Nature’s Herald, Life from the Loam, and Glissa, the Traitor,” Hoogland said. “I like throwing off my opponent with unexpected cards and hearing them explain how they don’t know how to sideboard while they look over their piece of paper with sideboard plans.”

Hoogland’s rise to Open Series regular started like many, playing casually and drafting with friends at local game stores. He started playing in Apocalypse and didn’t get his DCI number for the better part of a decade. He began traveling to Opens near the end of 2011 and was able to shift his focus more to Magic when he was wrapping up his final year in graduate school at Illinois State University in Bloomington, Ill. With his schooling coming to an end, Hoogland invested in Legacy and began testing for events, both of which quickly began yielding results.

His results started piling up, and as the Open Series heads to Worcester, MA this weekend Hoogland is among the Top 35 players with the most Open Top 8s, tied with ten other players with seven, along with an Invitational Top 8 from Somerset in 2013. His current ranking of fifteenth on the Season Three leaderboard represents his work on the Open Series, and his yearly points total puts him in thirteenth for Season Four, a spot he’d like to improve on with the final eight at-large berths to the Players’ Championship coming from the eight yearly point leaders that aren’t already qualified. 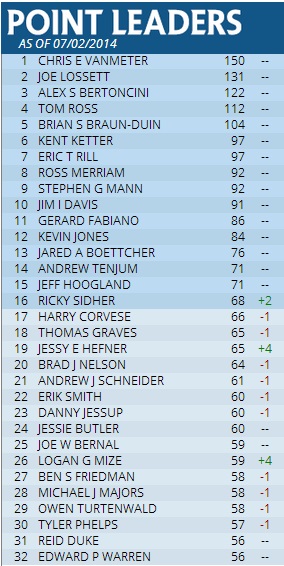 “My goal for the year is definitely qualifying for the Players’ Championship,” Hoogland said. “I don’t really play PTQs or very many huge events and I really enjoy the coverage SCG does with their tournament series, so I want to make sure I can be in the Players’ Championship at the end of the year. I am really content playing and hanging out on the Open Series, with it and all the IQs in my area I get to play in a few events every month and still get to stay relatively close to home.”

With the Open Series in Worcester this weekend, Hoogland will be hitting an IQ at Nerd Rage Gaming in Chicago in his last Standard event before M15 joins the format. Following M15’s inclusion to Standard, Hoogland will be hitting the Kansas City Open at the end of July, an event he is looking forward to where he knows he will be packing a Chord of Calling toolbox deck.

“The wheels are already turning for Kansas City and I don’t often preorder cards, but when I saw Chord was coming back, I made sure to get four copies, because that is a card I want to play with,” Hoogland said. “I think what is so frustrating about the current Standard is it is all about finding your bombs and having your answers line up exactly to your opponent’s threats. There aren’t any super-sweet synergies or strategies that come up, but I think that will change with M15.”

Hoogland’s often outside-the-box thinking and deckbuilding can be found on his weekly stream for The Meadery, where he plays Modern and Legacy. He uses his stream to interact with viewers by discussing cards and formats as well as educating players on his four-color Loam deck in Legacy. The stay-at-home dad puts a lot of time into Magic Online between bottles and diaper changes for his five-month-old son, Jacob.

Before deciding to stay home with his son full time, Hoogland worked as a technical analyst for an insurance company. He still puts his Master’s Degree in applied mathematics to use by teaching part-time at a local college in the evenings. His background in math makes him an expert in tiebreaker math and gives him an edge in games with complicated board states and combat interactions.

“One day I’d like to go back to school and get my PhD and continue studying these really complicated things,” Hoogland said. “One reason I like Magic is it has a lot of complicated and intricate puzzles to solve. It’s no surprise the Open Series has a lot of fellow math people on it. I know people like Joe Lossett and Dan Musser are also math guys that have done some teaching.”

When he is not copying Dark Depths with Thespian Stage, Hoogland streams his Modern Faeries deck. With a much larger card pool than Standard and a lack of consistent turn-one and turn-two combo decks, Modern has become Hoogland’s favorite format. In fact, his fondness of the format has led him to play in a handful of Modern Grand Prix, including a Top 16 finish in Grand Prix Kansas City in 2013.

“I love Modern and am very happy SCG is picking it up on Sundays,” Hoogland said. “I feel like it has the most games where I either win or lose because I made better decisions or my opponent made better decisions than I did. When you really know what you are doing in that format, you have a huge edge and you don’t have to play the same twenty or so cards to combat crazy combo decks like in Legacy.” 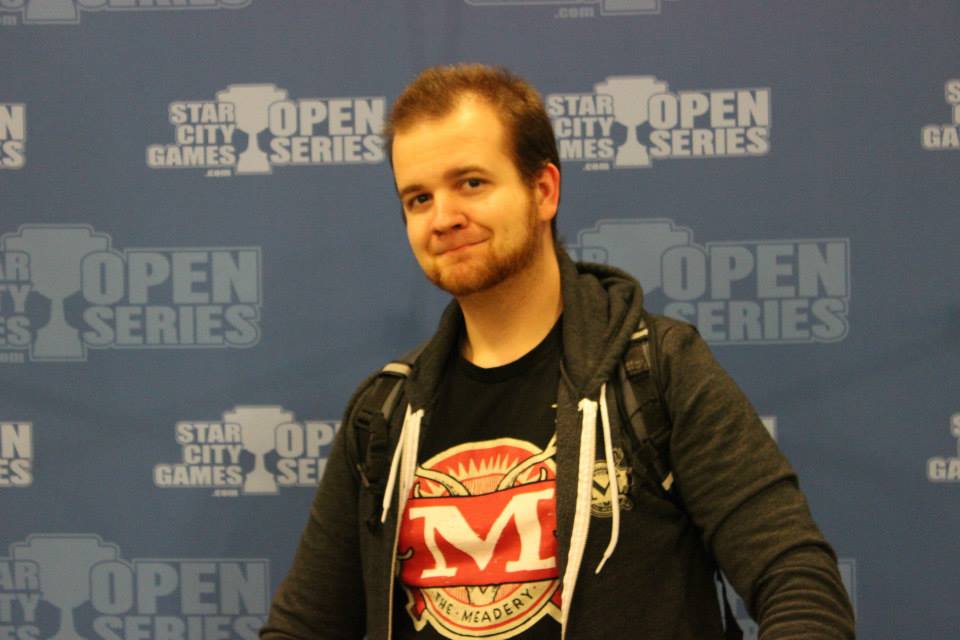 Hoogland poses for his Top 8 photo in the Cincinnati Standard Open in May.

With his steady finishes at Opens, a weekly stream and activity on social media, Hoogland has gone from a casual player to a prominent figure at Opens across the Midwest. He said one of his biggest moments was the adoption of Junk Midrange this season after he piloted it to a semifinals finish at the Cincinnati Standard Open in the first week of Journey into Nyx’s legality. Seeing players play his brew and hearing other’s refer to the deck as “his” after his performance with it meant quite a bit to the popular figure on the SCGLive stream.

“It’s kind of sweet, about a year ago people started recognizing me and it feels great when other people start to use your deck and the rogue deck becomes the norm,” Hoogland said. “I’ve had some people ask me to sign a playmat and one guy asked me to sign a set of Vendilion Cliques and I told him, ‘you know these cards are worth a lot of money, right?’ ”

As Season Three of the StarCityGames.com Open Series rolls on, keep an eye on Hoogland as his fights for points to lock up an invite to the Players’ Championship while bringing something interesting to the table. #SCGKC is three weeks away, and that gives him plenty of him to tune his Chord of Calling deck for a shot at another Top 8, and possibly his first trophy.