If you just paid some life and named two colors when you played a fetchland, and that land tapped for mana of those two colors for the rest of the game, they’d be better than all the other lands in Modern, but on top of that, they trigger landfall twice, count toward delirium, trigger revolt, allow you to shuffle your deck if you need to, and interact with a variety of other mechanics, as well as marginally “thinning your deck.”

Fetchlands are fantastic, and we’re allowed to play up to 40 of them, but even though people play twenty to 24 lands, they rarely play more than twelve fetchlands. The reason is that you need to have room in your deck to have lands to fetch. Consider Death’s Shadow, a deck that prefers to draw a fetchland over another land far more than the average deck. Even in these decks, people tend to play twelve fetchlands and six fetchable lands. This means only two-thirds of their lands are fetchlands.

If you increase the size of your deck, you need to play more lands, but you don’t really need to play more fetchable lands, so every additional land you add to your deck can be another fetchland. At some point, the fetchlands we have to add are a little worse than the ones first ones we were playing, (Marsh Flats isn’t as good as Bloodstained Mire in Grixis Death’s Shadow) and we might even need to add one more fetchable land to make sure that our lands do what we want.

But assuming that we don’t need to do that in Death’s Shadow, if we move from 60 cards to 70 cards while trying to keep our ratio of lands as similar as possible, we want to add three more lands, and all of them can be additional fetchlands, so now, instead of twelve of our eighteen lands being fetchlands, fifteen of our 21 lands are, so now we’ll draw fetchlands instead of other lands almost 5% more often.

There’s a good chance that’s not worth doing in Death’s Shadow specifically, because we also draw Death’s Shadow itself less often if we make the deck bigger, and Death’s Shadow is much better than the other spells we’d be adding. But not every deck is built around a single card that it was to draw as many of as possible like Death’s Shadow.

The bigger issue at play, I think, is the number of colors you can put in your deck. Basically, the conventional wisdom in Modern is that you can play up to three colors relatively smoothly with a fetchland-powered manabase. If you try to go to four colors, you need more different fetchable lands, which means you get fewer fetchlands, so more of your lands only offer access to one or two colors instead of three or four colors, and you can’t make the numbers work. If you’re willing to increase the size of your deck to include all the fetchable lands you want while flooding your ratios with fetchlands, the mana can actually work a lot better than it would in a four-color 60-card deck.

Imagine a balanced four-color deck that wants access to every relevant shockland. That makes six shocklands. Now, let’s imagine we want all four basics to minimize the amount of life we’ll have to lose each game, so we’ll call that ten fetchable lands we want. Let’s assume that we have a relatively low curve, but not Death’s Shadow low, so we’d want 22 lands in a 60-card deck. We’d have room for twelve fetchlands. In a 60 card deck, we’d have three shocklands of each color and a basic, so we have sixteen “sources” of each color, which is to saw that there are sixteen different cards that could be in our opening hand that would allow us to have green mana, for example. 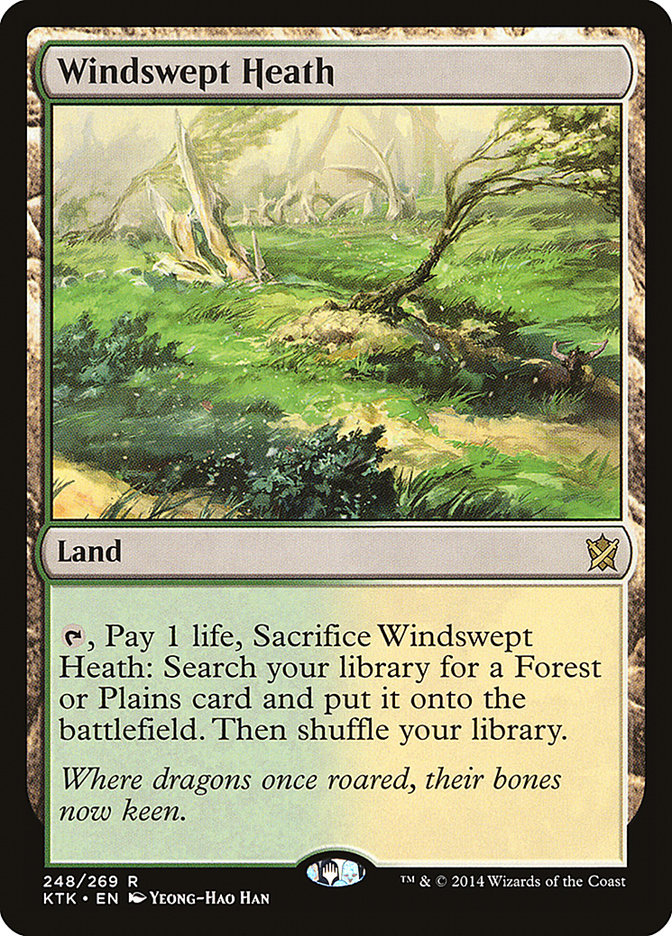 If we played 80 cards instead, we’d still have the same ten fetchable lands, but now we could play nineteen fetchlands (while actually playing a very slightly lower percentage of total lands in our deck). Now, we have 23 sources of each color, which is like having 17.25 sources in a 60-card deck, so we’ve added a source of each color to our deck while reducing the ratio of lands just by increasing the size of our deck. This change isn’t huge, but it could easily be the difference between a manabase that plays out smoothly andconsistently and one that doesn’t, and remember that, on top of making our colored mana work better, we’re also just drawing fetchlands more often, meaning we get to take more advantage of all the fringe benefits of fetchlands.

Instead of adding a color and playing ten fetchable lands, we could stick to three colors and play six fetchable lands, and just use the increased fetchland ratios to turbo-charge a landfall/revolt/delve deck.

So what might all this look like in practice? Well, let’s start with the most obvious, Death’s Shadow–I know, I said we might not want to do this because we’ll draw Death’s Shadow less often, but Death’s Shadow is a deck that would really like both more fetchlands and more colors, so what happens if we push it pretty far? If we basically just mash all the different builds of Death’s Shadow together without cutting anything, I can imagine that it might be the best build. (Or it might be the worst. It’s really hard to know with something this outside-the-box.)

29 lands, 21 fetchlands. Over 72% of lands are fetchlands. 25 sources of black and blue, 24 sources of red and green. That’s like 14.8 red sources in a 60-card deck, compared to fourteen in 60-card Grixis Death’s Shadow. This is to say that, despite the cost that each draw minimally impacts the composition of the rest of the deck, this deck probably has better mana than a 60-card deck with one less color (I’m not sure how problematic needing to fetch four colors instead of three will actually be to how games play out).

Obviously, for this starting point, I just included everything. I imagine that, with testing, I’d find that there were some cards I didn’t like as much, and I’d trim them, and gradually reduce the size of the deck in the process. If each change takes the form of either cutting or adding a card instead of replacing a card, and you simply play a lot and cut or add cards as they seem necessary, you could potentially naturally evolve toward an “optimal” deck size of some number greater than 60.

The biggest problem with this, and it’s a problem I genuinely don’t have a solution to, is sideboarding. The loss of efficiency of sideboarding is likely too high to allow you to play a deck this big, but I’m not sure if it’s too high to allow for somewhere in the middle. There are tradeoffs, and where there are tradeoffs, it’s hard to know that sticking on one extreme, the way players collectively, have, is right.

This is a simple first step in building like this, and it’s not the first time we’ve seen it. Scapeshift in particular has been pushed to more than 60 cards sometimes just to make the mana work when needing to fit too many Mountains into its manabase. The other application I’ve been mulling over is in building around revolt. Basically, I think Hidden Stockpile is a Modern-power-level card if your deck is good enough at triggering revolt, and pushing the number of fetchlands is a good way to do that. The problem is that I’m really not sure what the deck around it should look like at this point.

Regardless, I don’t know that now is the time for more than 60 cards, but I do know that as the card pool expands, it gets easier and easier to find more spells of a similar power level, but no other lands are close to the power level of fetchlands, so the incentives to build to maximize the power of our lands over the power of our spells do increase in some way over time, which is to say that, even if it’s not right now, it could be someday, and getting there first might be the best way to truly break Modern.