As for Mardu’s mechanic, Raid, this is another great mechanic. It’s simple but leads to great gameplay and interesting decisions from turn to turn, game to
game. It’s also a great way to print comes into play ability creatures at good rates that promote a different sort of gameplay that previous 187s.

One of the weekend’s biggest reveals was that Khans of Tarkir will, in fact, contain Khan Tri-Lands, such as: 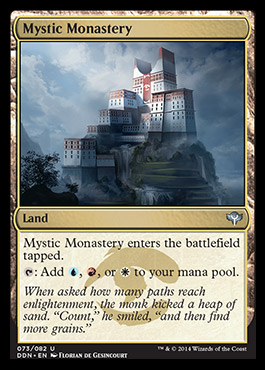 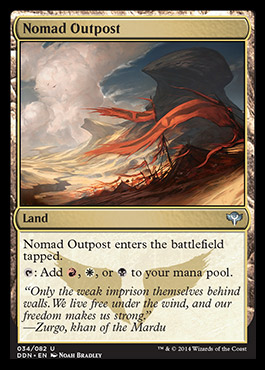 Tri-lands are really strong. The first five were fantastic, and they had to compete with Vivid lands (plus Reflecting Pool), not to mention filterlands
like Graven Cairns. These five are poised to be quite strong themselves, though they are also butting up against some pretty unreal tapped lands (the
Temples from Theros block). Will people even want to use tri-lands, when Temples are available?

Hell yes! A land tapping for three-colors of mana with no pain is a big deal.

With only a few cards from Khans of Tarkir spoiled thus far, it’s definitely too early to predict what decks will be good; however, we can definitely start
to build an understanding of what decks are possible. The mana available in a format is one of the single most defining components of it. With the
tri-lands confirmed, here’s what we’ll have to work with for lands after the rotation so far:

● Radiant Fountain (the big payoff for being mono-color!)

● Urborg Tomb of Yawgmoth (for helping double black in three-color decks, not to mention anyone using painlands)

This is a very asymmetric distribution of fixing. Not only do Khans have tri-lands, they also have access to two painlands, while Shards did not. I’m not
sure what other lands will appear in Khans of Tarkir, but I would be shocked if there isn’t another cycle of tri-lands at common. Shards of Alara had
Panoramas, and while Khans of Tarkir might have a different cycle, they will certainly have something. I just hope it enters the battlefield untapped.

It is important to note not only what’s coming but what’s going. Shocklands rotating is obviously very loud, but Mutavault leaving is probably even more
important. This means there’ll be less reason to play mono-color (by a lot), but it also means there’s a lot less reason to play allied two-color decks. It
can be done, but it probably involves using a tri-land as a glorified guildgate and/or Mana Confluence as a bad painland.

There are so many pillars of existing Standard rotating out; Sphinx’s Revelation, Supreme Verdict, Pack Rat, Lifebane Zombie, Nightveil Specter, Blood
Baron of Vizkopa, Mutavault, and so many more, the format really is going to start out more like Block than old Standard. After all, it’s just Theros Block
Constructed plus M15 and Khans of Tarkir.

Now, there’s no question that Khans of Tarkir is going to bring a lot to the table in terms of definition. I mean, just look at how much Theros set the
pace for this year. Still, the existing block format is a good place to build a foundation for understanding the new format. The most important difference
between the Standard of the future and Theros Block Constructed so far?

Block Constructed was a format with relatively little in the way of fixing. The Temples are extremely strong, but that’s a single dual land for each color
combination. After that, you’ve got Mana Confluence… and you’re done. Part of why Sylvan Caryatid was such a defining card was just how bad the mana was
of any deck that didn’t have it as an extra “dual land.”

Even without knowing what the second three-color land cycle in Khans will be, it’s already clear that three-color Khan decks are going to be the primary
starting point of the format. What’s more difficult to understand the implications of, however, is what the balance between tapped lands and painlands will
look like.

See, Temples and tri-lands are very strong. Painlands aren’t. However, the more tapped lands you use, the worse they get. Also, the more multi-lands you
use, the better painlands get (since you’ll tap them for colored mana less often). This means the right balance between tapped lands and painlands is not
just some easy magic formula. It’s going to depend on the needs of your exact deck.

For instance, let’s take a look at the primary Mardu fixing options:

Okay, that’s not bad, as far as manabases go. We’ve got double white, double black, and double red that we need by turn 3, and we actually get there with a
passable number of tapped lands and just one Mana Confluence. It could have been a lot worse.

Now, let’s imagine we’re not actually double in one of the colors. For instance, if we were W/B but only needed single red, we could play:

That’s actually a pretty good manabase, all things considered. Most of the lands enter untapped, and we aren’t actually going to take that much damage from
our lands in the grand scheme of things. What about an aggro Mardu deck, however? What would a Dark Boros manabase look like?

This manabase is quite painful, but it can support double white early, as well as single black and single red, despite having few tapped lands. It’s
unrealistic to not play some tapped lands in a three-color deck, even with just single color of all three. What does that even look like?

This list has 23 land (which is already higher than some aggro decks want), and it has just 13 of each color. That is surely too inconsistent to play. Of
course, if we’re willing to just play two enemy colors, we can run something like the following:

Interesting, isn’t it, that we have to play tri-Lands just to get enough dual lands?

Now, what does an allied two-color manabase look like?

Not that we’d even want to play U/W with the current available cards, but that’s a pretty sharp decline. We don’t even have a second tri-land to conscript
into Guildgate status, relying instead on the ol’ two-color Evolving Wilds technique!

What about Green decks? After all, Green decks generally have pretty different constraints due to green mana-fixers.

As you can see, the new format makes playing a green midrange deck very easy, and there are a lot of options for tweaks, depending on the exact needs of
our list. BUG, as a color combination, is likely to be one of the early tier 1 defining strategies, possibly replacing U/W Control as the control deck of
choice. The Block deck was already one of the best, and its mana was not great.

I’d love to play a couple Evolving Wilds in here, as the Courser of Kruphix combo is sweet on two levels. Unfortunately, we just can’t justify cutting an
on-color Temple for an Evolving Wilds. The power drop is surely too great.

What about an aggressive Green deck though? Well, it’s not clear the cards will even be available to support such a deck, but Sultai does have access to
eight green painlands, so turn 1 Elvish Mystics will never be a problem.

I went with the fourth Temple of Deceit instead of the fourth Sultai Tri-land because we already have more green mana than we really need. The reason for
so many Forests is to ensure turn 1 Elvish Mystic, but do we really need twenty green sources total? I guess if we had a green devotion deck that wanted to
splash blue and black, this could be the way…

The Junk archetype was already one of the best in Block, and it looks poised to gain a ton from both M15 and Khans of Tarkir. It’s not just a lot mana
options (although that’s great too). There are plenty of planeswalkers to consider, not to mention the M15 souls. I’m not sure what mechanic Khans of
Tarkir is going to give us, but I just can’t imagine Junk being anything other than tier 1. What it’s really in the market for is a powerhouse threat at
four mana. Maybe Reaper of the Wilds or Polukranos, World Eater are what we’re looking for, but I feel like Khans of Tarkir has to have something better
for us.

What about control decks? What might a control manabase look like? We already looked at a Sultai deck, so let’s take a look at Jeskai:

In the format to come, we’re going to have to figure out how to make up for the loss of Sphinx’s Revelation, Supreme Verdict, and even Detention Sphere. We
can use Banishing Light for Sphere, and Anger of the Gods and Fated Retribution sort of help make up a little of what we are missing from no Verdict, but
we aren’t even close to making up for Sphinx’s Revelation. If control is going to work, we’re going to have to figure out new technology.

What about a five-color manabase?

And what about a mono-color one?

Okay, that one’s pretty obvious, but I think Radiant Fountain is kind of underrated. Even if you play two colors, if your mana is good, I would at least
consider one or more of them. It really is a good way to get extra utility out of your lands, and that it enters the battlefield untapped is a big point in
its favor.

Everything is about to change in Standard (and that’s not even counting any possible upcoming rules changes). In trying to understand these changes, we
must first understand the changes to manabases. Remember the lessons taught to us by Zvi Mowshowitz and Tony Montana: