Sometimes things don’t go your way. After a lot of time testing and talking about the format with some great players, I arrived in Memphis with a R/W Aggro
deck that I was confident would put me in great position to secure a top 8 finish. I slept well, ate a great breakfast, and came off my byes ready to win.
Only five rounds later, I was marking drop on a match slip after taking my third loss.

To say I was disappointed would be an understatement. This was a big opportunity for me, and I felt like I blew it, and even worse, I had no clue how.
Rather than wallow in my frustration (although that definitely happened), I decided to pull back and replace the bad memories of the tournament with better
ones.

A few nights out in Memphis with friends, both old and new, and I can say last weekend was a great time. It also helps that I was able to bird so many of
my teammates from Pro Tour Fate Reforged. They absolutely dominated the Grand Prix and were led by Jack Fogle (or as I prefer to call him, Jacque Foglé),
who took home the trophy. A much deserved congratulations to him from an old New England man.

This sort of shift of perspective is incredibly important for someone who plays as much tournament Magic as I do. I am going to lose, and I really
hate losing. When a game, match, or tournament goes poorly I have a tendency to overanalyze trying to find a mistake and end up compounding the emotional
toll. Even worse, my mood often sours to the point where I am miserable to be around.

As I have come to realize, this is about the worst possible way to handle losing in Magic. I am not helping anyone, most of all myself. It is an entirely
wasteful and selfish exercise designed to garner pity. However, realizing this is merely the first step in finding a solution. For me, the next step was
distraction. That is where the many friends I have made in the community came through, providing excellent company over the course of the weekend.

My other distraction came in the form of great food. (Note: If you’re looking solely for strategic content, skip down to the section titled Moving
Forward.)

Saturday morning during byes, I was led to Alcenia’s, a soul food restaurant that fortunately served brunch starting at nine. Even more fortunate was that
it served chicken and waffles.

I love chicken and waffles.

Even taking that into consideration, this meal was incredible. So incredible, in fact, that I took a picture to document its deliciousness. 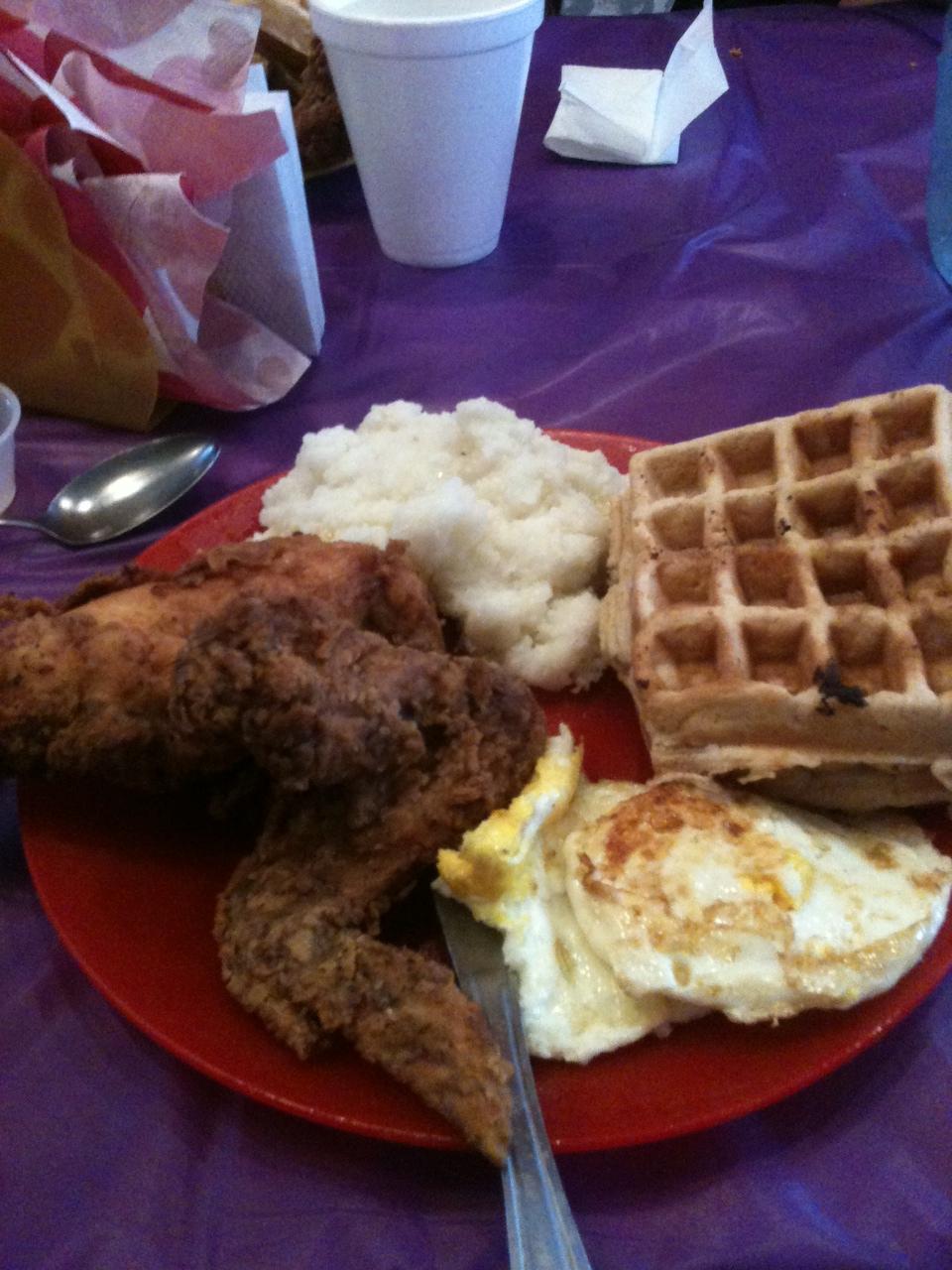 Not pictured: Me drooling.

Alcenia herself offered a bit of a show with the meal, greeting each person at the table with a kiss on the cheek and bringing her own brand of folksy
southern charm that left us all laughing on our way out the door.

Saturday night, I was part of large contingent of Magic players that dined at Charles Vergos’ Rendezvous, a famed Memphis barbeque restaurant. While the
main attraction at Rendezvous is pork ribs served with the traditional Memphis dry rub and sauce on the side, our waiter wisely pointed us towards the
combo of ribs and brisket, the latter of which was excellent.

Our final dinner stop came Sunday at Gus’s Fried Chicken. I ordered a three piece meal with mac and cheese and collard greens for the full soul food
experience and was not disappointed. The breading on the chicken was thin and crisp, while the meat itself was perfectly cooked. I ended the meal with a
slice of pecan pie. Damn does the south know how to eat.

Suffice it to say, when someone asks me about this Grand Prix a year from now, I won’t remember misplaying a Temple scry to take my third loss, I’ll
remember delicious chicken and barbeque. Also, I really hope that WotC comes back to Memphis soon, hopefully not during an ice storm.

The other way you can turn around a poor weekend is by learning from it for the future. Once again, this is easier said than done, but after some travel
snafus left me with ample time to think about the Grand Prix, I think I have come to a constructive lesson.

I have, for the most part, honed my skills on the Open Series circuit. Because SCG’s events have been largely Legacy and Standard, the most long-term
success comes from learning a single deck very well rather than trying to innovate on a weekly basis. Opens occur frequently enough that the best strategy
is to always bring something solid rather than risk making a completely wrong choice on a given week.

There is something about being wrong that paralyzes us. A fear of shame and reprisal that forces us to keep our wackiest ideas to ourselves, although the
idea does not have to be too far out there to elicit the same fear. Even small deviations from the established paradigm are too easily dismissed.

Take a look at the list I registered in Memphis:

This is very close to the lists I have been playing for the last month. I added a third Valorous Stance because of the emergence of G/R Devotion and two
Mastery of the Unseen to combat U/B Control, which presumably would become more popular to combat Devotion. Lastly, I cut Monastery Mentor for a single
Brimaz, King of Oreskos because the latter is excellent in the mirror.

Other than the possibility of Mastery, there is nothing about this list that would surprise my opponents. In a large event where you need to put up an
exceptional record, you need to look for every possible edge. I have grown into the poor habit of sacrificing the edge of surprise.

In contrast, look at the best performing list of R/W Aggro in the tournament:

Ben moved all the large creatures to the sideboard in favor of a lower curve and additional burn spells to provide reach. His lategame is built around
Outpost Siege, which is particularly powerful when you are digging for a critical mass of burn spells. There is some worry that removing Stormbreath Dragon
will make the deck more prone to flooding, but Soulfire Grand Master is powerful when you have plenty of lands and continues to further the burn plan.

Stormbreath Dragon is a particularly good card to not have since it is nearly always the threat that forces your opponent into conservative plays. I would
not be surprised to hear that Ben defeated multiple opponents who held a Stoke the Flames or Hero’s Downfall for an extra turn in fear of a Stormbreath
Dragon only to die to the extra damage they took from a grizzly bear.

In the week leading up to Memphis, I had been impressed by Outpost Siege myself and was told by numerous players during the week that I should be playing
four copies. But I was scared. Scared that I would draw too many of them in the earlygame, fall behind as a result, and never be afforded the time to cast
the powerful enchantment and leverage the advantage it grants.

The additional cheap spells in Ben’s deck ensure that he should at least be even on board when it comes time to play an Outpost Siege. It also makes him
more capable of using the cards he draws off of Siege, since he will almost always be able to reasonably cast the exiled card. There are also fewer awkward
decisions to make between casting the exiled card and casting a better card in his hand, since often he will be able to play both.

I really cannot say enough about how well-constructed this deck is, even if it is disappointing to see a deck that I firmly believe I could have found had
I been looking for it rather than staying safely in my bubble. This, of course, leads to the question of how to break out of that bubble. After some
thought, I think the answer is a shift of perspective in how I build decks.

For the most part, I build decks from the top down, taking for granted the known shell and tuning the rest to my liking. However, periodically it pays
large dividends to rebuild a deck from the bottom up, especially after a new set is released. R/W Aggro saw moderate success before Fate Reforged and since
has become one of the most popular and successful decks in every tournament.

In that time though, the deck has barely changed. Outpost Siege quickly replaced Chandra, Pyromaster, and Valorous Stance earned a few slots, mostly in the
sideboard, but the complexion of the deck was largely static. What Ben did was conclude that Outpost Siege is powerful enough to be a linchpin of the deck
and rebuilt the deck in light of that realization.

That is a significantly different narrative than realizing Stormbreath Dragon is not a good enough maindeck card and simply replacing it with other cards
that could prevent flooding in Soulfire Grand Master and Outpost Siege, and understanding the distinction is paramount to figuring out how this list plays
out differently than other R/W lists and how it is most likely to evolve in the future.

Moving forward, I am certainly going to be more cognizant of my opportunities to innovate and gain a larger edge at major events. If this weekend’s failure
can lead to success in the future, it will all be worth it.