Is this card good?

How do I sideboard with my deck?

These are the sorts of things we as Magic players hear every day. Maybe we are looking for advice from our friends or trying to help out an aspiring local
player. We offer or accept opinions and try to arrive at the correct answer. It is the answers we are all looking for, after all. The best deck choice, the
best list, the best sideboard plan. These are the answers and the answers are what is important, what will get you to the top of this week’s FNM or next
month’s SCG Open. The crux of my article this week is that this focus ultimately leads to closed-mindedness. An important and generally overlooked part of
arriving at the best answer is asking the right question to begin with.

On the surface this idea seems trivial, so allow me to explain my meaning. The questions I listed above are all unnecessarily vague. They provide the
responder with little to no direction for providing an answer as well as no insight into the approach and biases of the questioner, who is then left to
state their opinions as fact with no provocation to include the rationale behind them. Pointed questions are the most effective.

A pointed question provides direction for the responder, which in large part means placing the question in an appropriate context. Taking the first of the
above questions as an example, it should include a theoretical deck and metagame in which the card can reasonably be expected to exist, along with the role
the card plays. For instance, “Is Narset, Enlightened Master a good card?” becomes “How effective is Narset as the top-end finisher of a Jeskai control
deck?” 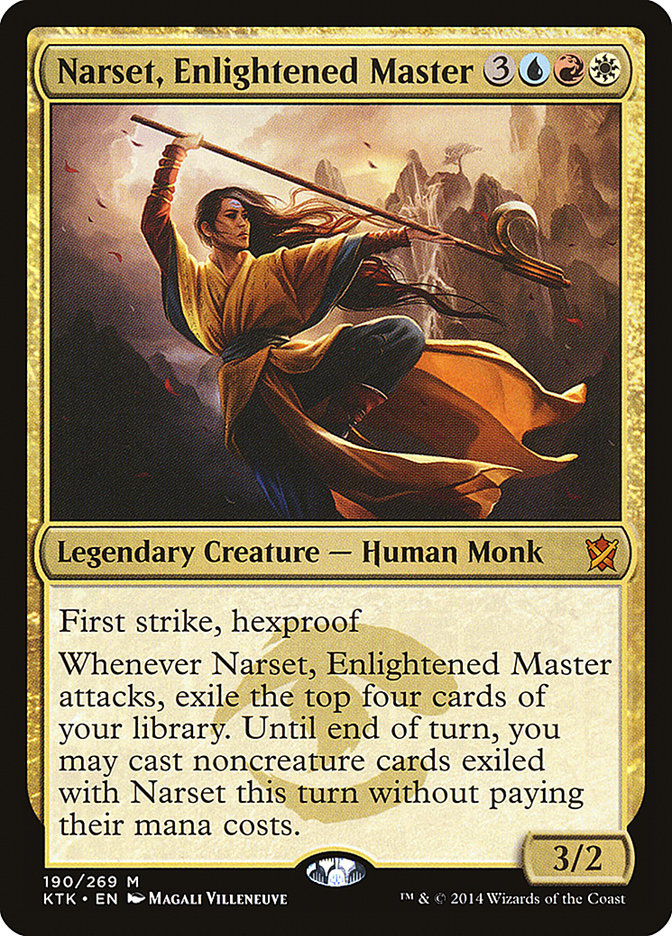 The former question will often yield a cursory “yes” or “no” in response. The latter opens you to exploring what such a deck might look like. The typical
control deck is creature light, which Narset’s ability encourages. Since she has hexproof, we do not turn on opposing spot removal spells, so an otherwise
creature-less build has merit. Her ability also does not synergize well with counterspells, so a more tap-out style is preferred. With plenty of removal to
remove blockers, we have a robust card advantage engine that fits our general plan of controlling the board until our powerful late game cards can take
over. The latter question cascaded into questions of how to maximize the power of Narset, which is much more useful than the former.

It is important to note that the difference in effectiveness between these questions is largely from inherent structure. The first question is simplistic
in form. Is Card X good? Moreover, it yields a binary response: yes or no. The pointed question goes deeper by asking how. Specifically, how can we
maximize the effectiveness of card X? The distinction is critical, even if a bit tedious. I contend that the first leads to closed-mindedness, while the
second leads to open-mindedness. The former is rigid and unchanging. Once a card is labeled bad it is discarded. The latter is optimistic. Every card has
potential given the correct context. By looking for the proper context, we can identify sleeper cards that the hive mind has dismissed. This skill is
particularly useful following a major rotation. Few people looked at Nightveil Specter or Pack Rat as Constructed staples during their first year in
Standard, but they have come to define much of the last year since they complemented what Theros brought to the format.

The underlying principle demonstrated here is that no card is useful in every context. Not every black deck in Standard necessarily should play Pack Rat,
nor does every blue deck in Legacy have to play Brainstorm. These cards are exalted (or vilified) because they are used often and used most successfully,
but your growth as a player will depend on determining when “good” cards are bad and when “bad” cards are good. Making a concerted effort to structure your
thinking in a way that respects context will lead to being open to more and better ideas.

Of course, contextual thinking is not without its caveats. It is important to not lend credence to corner-case scenarios and sacrifice significant
advantages in games that play out as expected. I see this often when building a deck with a tool box. No one likes to feel as though the opposing deck has
some trump card(s) that effectively end the game, and with a tutor like Chord of Calling or Green Sun’s Zenith, we can guard against such hopeless
scenarios for the low price of a single slot in the deck. But if the card is weak or off-theme by itself and the scenario is not particularly prevalent,
then you are making your deck worse in order to gain peace of mind. This is especially relevant for an engine deck like Legacy Elves, where each elf makes
the rest better so you have to be careful not to cut too far into the core of the deck.

Experienced players will often think along these lines from instinct, but I have always found it helpful to be as precise as possible, especially when
soliciting advice from others. Seeing your approach will be helpful as they can compare and contrast it with their own, leading to fruitful discussion.
These discussions are invaluable for your growth as a player, as I can personally attest to. Moreover, I am much more open to helping someone with a
question that signals some prior consideration, rather than someone who is looking for an easy answer.

Related to this is the tone of your question, especially when looking for advice. Asking “Do you think Card X has a place in Deck Y now that the metagame
has shifted?” is much more likely to elicit a serious response than “How can you possibly not play card X in deck Y? It’s so good because of the meta
shift!” The reason: you have assumed yourself correct in the latter question, so it is not really a question at all. It is a chance to gloat about being
right. Once again there is a dichotomy between open and closed-mindedness. It is impossible to find the correct answer if you do not allow yourself to hear
it, and often that is exactly what players do when they ask a question in the first place.

I relish my role as an emerging player on the Open Series and new columnist for StarCityGames.com, especially in so much as it has afforded me the
opportunity to help others improve their game. As I mentioned in my first article, I have been playing competitive Magic for
many years and worked for a long time to overcome some of my many natural shortcomings as a player. I believe that places me in an ideal situation to
diagnose the mistakes that newer players make, but it is incredibly frustrating to offer advice to someone who is obviously unwilling to take it, and that
attitude is revealed in the questions that those players ask.

Magic is already an impossibly difficult game. There is no reason to alienate the players around you with phony elitism. I realized far too late how
important networking is in improving yourself as a player and made it a conscious goal of mine when I went to Pro Tour Dark Ascension in 2012. I ended up
loaning 71/75 cards for an Illusions deck to someone I had not met beforehand in an effort to entrench myself in the community. That person was Cedric
Phillips, so I would say it worked out pretty well for me. As for Cedric, he scrubbed the PT and now has to deal with me regularly trolling his stream. We
can’t all be lucky I guess .[Editor’s Note: Easily one of the worst decks I’ve played at a PT so thanks for reminding me of that!) ]

Now I am not going to advocate loaning your cards to complete strangers, but part of maintaining an open mind is being open to new people. These are the
people that are going to push you to improve by challenging your preconceived notions and making you reevaluate your game by providing a previously unseen
perspective. These are also the people that could become your friends and carmates for those grueling road trips that are simultaneously miserable and
awesome.

I understand that many of the concepts I introduced above are well-documented. Plenty has been written on the virtues of open-mindedness. Staying open in
your draft lets you find undervalued colors. Staying open in a game leaves you with more lines of play. Staying open to other people gives the possibility
of lasting friendship. You do not need me to tell you this. The key idea I submit here is to build these principles into your mindset. It is not enough to
understand and accept them on an intellectual level if you are constantly fighting your instincts in applying them.

Developing this mindset is the most valuable practice you can perform to progress as a player. There is more to improving than jamming games until your
eyes bleed. It is not merely practice that makes perfect but perfect practice. In this case, we often overlook how we can practice to improve ourselves as
individuals when that makes all the difference.

One final note: I would like to thank everyone who supported me last weekend in New Jersey. It was nice to salvage a poor Invitational finish (my third
consecutive day 2 with no cash) although I would have liked to take home my first Legacy Open trophy. Plus, with CVM taking home the Standard Open, I had
some beard pride on the line. It was not the ending I would have liked, but it is hard to be upset with second place. My next Open will likely be in New
Jersey at the end of September, but I may be crazy enough to go to St. Louis or Atlanta. Don’t be afraid to come by and say hello!