Man, I was totally looking forward to a weekend to myself. You know, the kind where you get to lay about the house in clothes so old they still listen to New Kids on the Block? Your hair looks like you’ve been sleeping on it for something like a week, because that’s almost exactly how late you allowed yourself to sleep in? And you get to pass wind and belch as loudly as you like because damn it, it’s the weekend? Well yeah, that was what I was looking forward to. Between the prerelease last weekend, and shifting house the one before that, I was long overdue for a good old slouch.

(I’m quietly trying to ignore the fact that many of you get to live this life every day anyway. Ew.)

I rolled out of bed on Saturday morning, and my phone quietly sat there staring back at me with “new message, read now?” ominously lit up on it’s adorable little face. I fumbled the complex combination of button presses, thumb wiggles, and pagan rituals required to access the message on my cute iddy widdle yet most user unfriendly cellular tewephone, only to see the words “want to draft?” blinking back at me. This sounds like the start of a tournament report, I know. But stories never really start with text messages actually asking “want to draft?” do they?

Anyway, no panicking, this isn’t a tournament report. Although the fact that my National Champs is only a few weeks away implies that there could possibly be one on the way. I guess it all depends on how I do this time around. So, want to draft? With Nats coming up, the answer could only be “yes” to get some of that much needed RGD draft practice in. I stumbled into the shower, ruining a perfectly good weekend of slovenliness, before wandering off to the card shop for some hawt, hawt draft action.

It wasn’t until the storeowner, Tall Mike, threw the packs on to the table for us that I realized that had been lured into the Coldsnap Sneak-Peek weekend events instead, and I wasn’t going to be getting any of that hawt, hawt RGD practice after all. After a little crying, drafting, and eating consolation chocolate (mmm, consolation chocolate…), I narrowly lost in the finals of the first draft with this stack.

Thankfully, I redeemed myself with this awkward assembly in the second draft, managing to 3-0 my way to happiness and more chocolate.

I only ended up with so many Chilling Shades because they were the only playable Snow Permanents coming my way, and with so many Rimewind Taskmage, I figured playing anything Snow-like was probably the correct play.

Some of you might be thinking that’s also the reason I played the two uncommon Snow Lands, but I’m telling you right now, I would play those suckers anyway. It seems like the trick to Coldsnap draft is valuing the Snow-Covered lands as highly as second through fourth pick. You can probably get away with drafting mostly mono-colored decks with the possibility of a second color provided by any off-color Snow Lands you snap on their way past, as opposed to choosing your second color by the cards and trying to draft lands to match.

The only drawback is that packing my draft deck full of drafted lands leaves me with too few cards to count both mine and my opponent’s life total. If you’re unfamiliar with this practice, you lay out three cards facing one way, representing five life each and then five more at a ninety-degree angle to the first lot, representing one life each. Kinda like this. 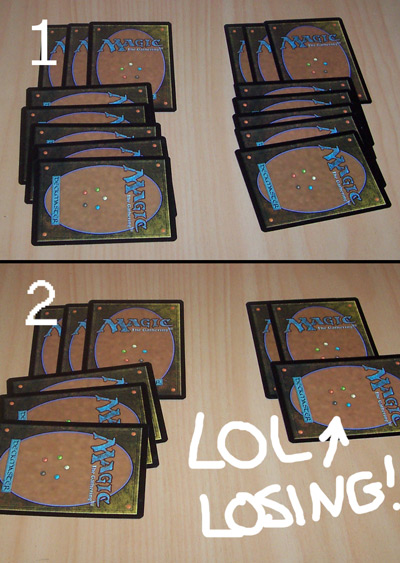 In example one, both players can be seen to have twenty life. In example two, the player on the left has eighteen life, while the player on the right only has eleven. You get the picture. I was forced to add my Sneak-Peek Promo card and the random Goblin Swine-Rider that my good man Ben-Ben found for me, just to bulk out the pool of available life total resource thingies! Oh, the indignity!

I also found that trying to force Ripple cards wouldn’t really do you much good. It’s a very attractive mechanic, so you’ll often be competing with other people to get them. It’s just not likely you’ll get enough to make it work, so I suggest sticking to the ones that actually do something on their own.

Surging Flame (“Surging Burn”) is awesome (obviously), but I find that Surging Sentinels (“Surging White Men”) suffer from being a little ineffectual on their own, and Surging Might (“Surging Pants”) is too easily victimized by Surging Aether (“Surging Bounce”). One idea my buddy Dave suggested was to get as many Surging Dementias (“Surging Chaff”) as possible. He figures if you can get nine or more of them into your deck, you can turn 2 Mind Twist people every game. Now that would get you some style points, you have to admit.

In case you’re getting a little confused there, this is actually the Wednesday MTGO article, honestly it is. I just get a little sidetracked at times, that’s all. Anyway, I was a little surprised at the Top 8 results from the Standard Premier Events this week. Understandably, the metagame is going to be a little volatile as it gets started. New designs like the Simic Aggro Control decks and the Blue/White/Black Reanimator decks have been gaining in popularity, as you’d expect, but this week sees what I would consider to be an uncharacteristic return of the “old-school” Aggro decks from anywhere between two and six months ago. Check it out.

Ten Top 8 playoffs gave us 80 individual deck showings. Well, actually 79 because one guy failed to show up to his match, and somehow Wizards have still failed to give me magic hack-the-server-for-decklist-like admin abilities on Magic Online, so we’ll never know what it was they were playing.

Check out all of that Hand in Hand up there at the top tables! It’s almost like they were off on a wee vacation for a few weeks, just to let the newbies have a paddle in the inflatable metagame pool before they came back and kicked it over and generally behaved like spoiled brats or summink. It’s also curious to spot that aggressive Boros decks are gradually increasing in numbers again. I know there are only four this week and there were only three last week, but if I remember correctly, I’m pretty sure the curator at the local museum was already clearing a space for a display dedicated to the archetype. A little hastily perhaps, so I guess the museum staff and I will be keeping an eye on it over the next few weeks to see how it fares.

As far as card prices are concerned, it seems like there has been very little movement over the last week. Pithing Needle has started to behave a bit like Vampiric Tutor, in that it’s price is increasingly defined by the small number of people prepared to trade them, and therefore it is anything but defined as it leaps to and fro to the whim of the sellers themselves.

(Ahem, everyone please rise for the blurb.)

The numbers shown, for instance, as 2-4, are the price people are buying the card for, followed by the price people are selling the card for. The prices shown in parenthesis, like this (2-4), are the prices from last week. If a card and its prices have been bolded, it’s because there has been a change in price from the week before to help you differentiate those cards from the others that are a little more… static in their movements. Card prices are in Tickets, because that’s what most people buy and sell with on Magic Online. Also note that prices can fluctuate based on the time of day as well, depending on just how many people are online selling at the time. Due to my uniquely antipodean location down here in the Pacific, and my tendency to hold down a regular nine to five job, the prices below end up being more of a general indication of what’s going on than an exact science.

Godless Shrine and Caves of Koilos are not doing much to reflect the recent increase in results achieved by the Orzhov Guild, but next week’s prices may be a different story.

I mean, next week will certainly be a different story from me, as I’ll have just finished covering the Australian National Champs for MTGParadise, for eventual linking to MagictheGathering.com. With any luck, the link will surface late in the week in the hands of the always delightful BDM or the ever fruitful Mike J Flores.dec, and I’ll get to post the Top 8 decks for you all here, or something. I’ll add some half-arsed commentary on how the decks are just the same as slash not even remotely like the decks from Magic Online, and we’ll call it a column! I’ll even try to slip some pictures of the Crocodile Hunter into the coverage, and maybe try to include the words “a dingo stole me <card>!” as well, just to amuse those who end up reading through it all.

Until then, think of me and all of those Australians down here in the freezing cold, and pray your air conditioning units don’t break down oh God I hope they do you smug little cough, cough with your 90 degrees plus grumble, grumble.