This build is not optimal. It’s built to show what the shell can do in the most focused way possible, and as such, it’s basically designed to optimize its own goldfish starts. You’ll note that this maindeck has no way to interact directly with any of the opponent’s cards except by copying them or forcing them to attack with a single Bident of Thassa. That’s not actually something you can get away with in Modern unless your plan is just completely degenerate, and even then, you’re still going to want interaction in the sideboard. I’m not sure what the best ways to interact here are.

As for what this deck can do in its current configuration:

Turn 3: Miss third land drop, tap three creatures to play a Wurmcoil Engine with Convoke (the cost is discounted by one because of Etherium Sculptor).

That’s not a terribly ambitious draw. If there’s a third land drop and Grand Architect it could look more like:

These starts won’t beat unfair decks, and removal slows them down significantly, but if your opponent is playing a creature deck they’ll quickly find themselves radically outmatched.

The sideboard listed has the cards that seem best to me as ways to offer interaction to this deck. I like having some countermagic, but it’s hard in a deck that wants to tap out every turn. Fortunately, Disrupting Shoal lets us do both, and also plays well with Bident of Thassa, a card this deck could happily play more copies of. Vapor Snag is extremely cheap and versatile, and when your creatures are threatening to end the game very quickly the way they can in this deck, bouncing a creature can easily be all you need to do to win.

Spellskite comes down almost for free when you play any of your engine pieces and protects those pieces while also shutting down Boggles and Splinter Twin. I can’t really justify not playing several of these in the maindeck.

Grafdigger’s Cage doesn’t hurt this deck at all, and Torpor Orb would also be a reasonable option, though you might want to side out Master of Waves if you’re bringing it in (but that’s not that big of a problem).

With a bit of work in predicting the metagame and tuning the answer cards in this deck, I think it could have serious potential. While you’re an artifact deck, you’re not particularly exploitable as an artifact deck. Stony Silence does almost nothing against you, and Shatterstorm doesn’t really answer Wurmcoil Engine all that well. Ancient Grudge is good, but less common because of those other cards, and even when people do hate your artifact package successfully, you can still just win as a Master of Waves devotion deck.

While less exciting to me, it’s also worth noting that Chief Engineer doesn’t only work with blue creatures, setting it miles apart from Grand Architect. If you wanted a little extra mana to include a big artifact in Affinity, you could make room for Chief Engineer there. You could also potentially use Chief Engineer to update Kenny Oberg’s Grand Architect/Birthing Pod deck from Pro Tour Nagoya.

Changing gears to other cards in the set, I’m sure everyone would call me out if I tried to submit this article without mentioning Hushwing Gryff, the obvious nod to Modern in the set. 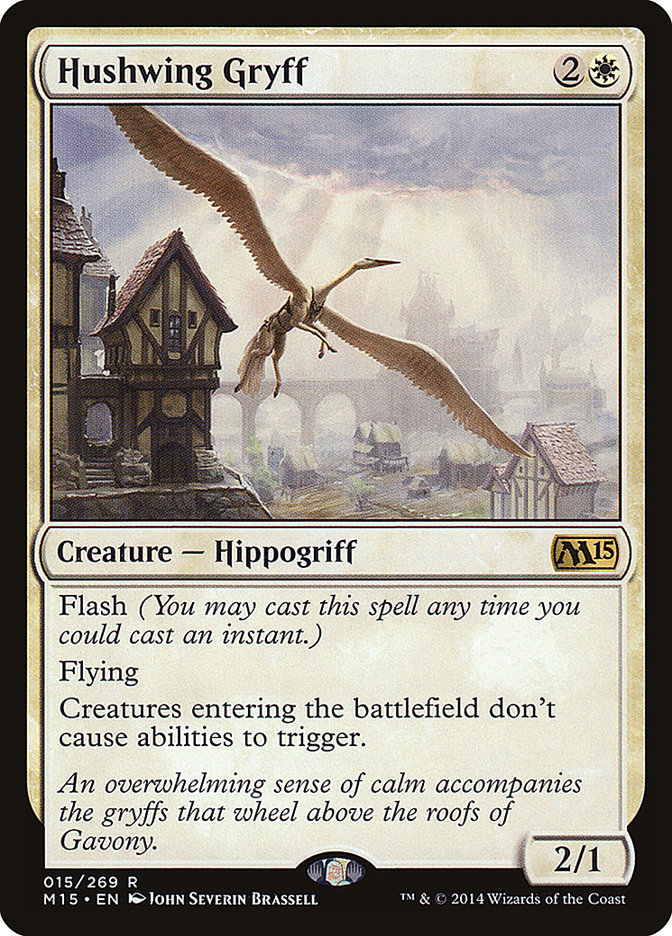 Its most obvious applications are shutting down Splinter Twin and Birthing Pod strategies, though it also stops Primeval Titan (if it can come down in time, and it’s sad that I feel like I need to say that about a three-mana answer to a six-mana card) and random other things. This isn’t a new effect, we’ve seen it on Torpor Orb and we know where it gets used. The primary differences here are that it’s a creature and that it has flash (obviously). These are both very significant. The fact that it’s a creature means that it can be searched for with Chord of Calling or Birthing Pod if you’re in the market for that – it seems somewhat unlikely, as it’s a symmetrical effect that will almost certainly be a problem for you, but stranger things have happened – and you can also play it in the maindeck in anything that wants it and can accept that sometimes you have a slightly bad rate on your random flying attacker, or you can just side it in for the effect without actually diluting your threat density.

The flash component is more interesting. Against Splinter Twin in particular, you can wait for them to try to go off and flash it into play, then you can answer the creature with the enchantment on it on your turn. Often they’ll try to go off with a mana up, but a lot of the time their plan for that mana is to cast Dispel, which doesn’t interact with Hushwing Gryff. They’ll probably have Lightning Bolt in their deck, but it can be hard for them to leave a red untapped while casting Splinter Twin because it is already double-red, so you can punish them with the Gryff without exposing it to Lightning Bolt because it has flash some portion of the time.

You probably won’t want to just sit on this forever, as leaving three mana untapped all the time is a pretty serious commitment, but it does offer a lot of flexibility. I’d suggest that this opens it up to inclusions in U/W decks that are just looking for evasive flash creatures to play an instant-speed game, but the fact that it shuts down Snapcaster Mage and Restoration Angel likely makes that a non-starter.

Going to slightly less obvious cards, I have to wonder about Nissa, Worldwaker. While five is a lot of mana, she offers a pretty great rebate of up to four mana back and provides some really serious ramp after that. The best place for her would likely be the Nykthos-based green Genesis Wave decks as she provides a way to still go very big without Nykthos. Turn-one Elvish Mystic, turn-two Fertile Ground allows turn-three Nissa, Worldwaker, untap three lands (one of which has Fertile Ground), cast Garruk Wildspeaker, untap two lands, still have three mana to play something else. On the turn after that, you can play a very big Genesis Wave. Or, you could play: 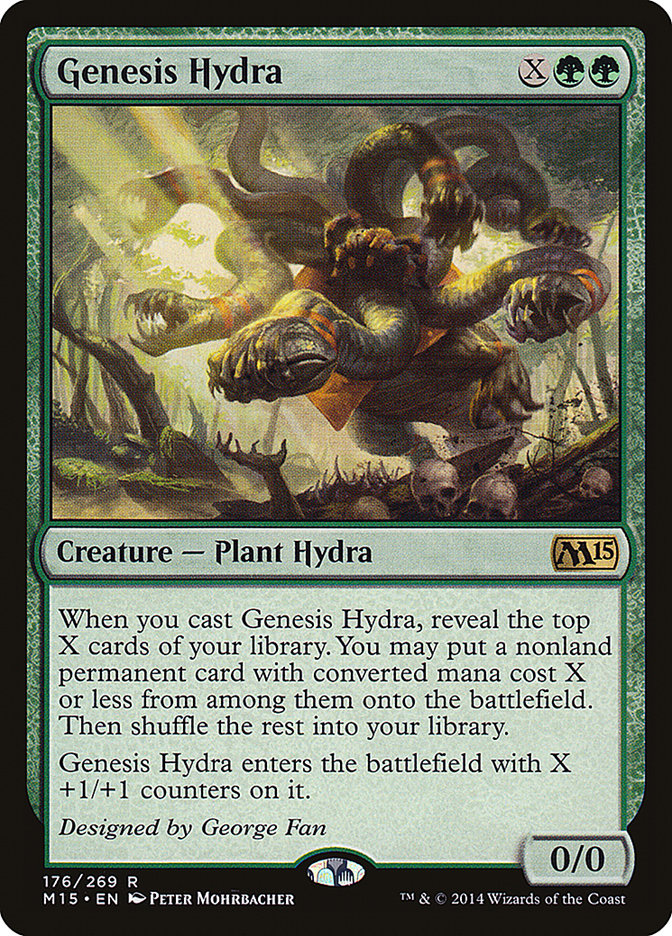 This is nowhere near the immediately game ending power of Genesis Wave, but it comes with another card that’s completely uncounterable. This isn’t just Cascade, where they can still counter both spells separately if they want, this just puts whatever you find straight into play. That’s a big deal, and I think it’s enough to open this Hydra up for serious consideration.

Next up: Slivers. I still don’t know what most of the Slivers in M15 will be (now that I’ve heard that there will be one uncommon sliver of each color), but Sliver Hive and Sliver Hivelord are interesting. Don’t let Sliver Hivelord’s cost scare you. If you’re playing Slivers in Modern, generating WUBRG should be amazingly easy between Cavern of Souls, Sliver Hive, Ancient Ziggurat, Reflecting Pool, City of Brass, and Mana Confluence. Also, Gemhide Sliver of Manaweft Sliver allow you to cast this on turn three if you played any other Sliver on turn one. Some decks might not care a lot about indestructible, both others will completely fold to it. I mentioned earlier that Crystalline Sliver was what Slivers needed, and that’s still basically true, but as far as substitutes go you could do a lot worse than this.

There are a lot of Slivers that are legal in Modern, and they support several different plans. Sure, all of those plans are slight variations on “get a bunch of Slivers into play, win,” but the abilities they offer are quite relevantly different from each other, and tuning a Sliver deck can be deceptively difficult. You can try to maximize for resilience and card advantage with things like Dormant Sliver and Frenetic Sliver, can maximize for mana and then try to play big Slivers, building a ramp deck, or can play cheap Slivers and ways to pump them and play more like a Legacy Merfolk deck. You can also try to maximize interaction or locking you opponent down with things like Harmonic Sliver (hi, Affinity!) and Telekenetic Sliver. This means it’s easy to mis-build a Sliver deck, but it also means that there might be a build that’s competitive that we just haven’t found (or had all the tools for) yet.

A few other cards that I could see playing roles in Modern:

This will often compete with Harmonic Sliver, but if you’re only playing one and can’t copy it, this is easier to cast, has an extra power, and it’s optional, which can sometimes help when you just need to play a creature. It’s also an Elf, which certainly has the potential to matter. Aside from going into any deck that wants this effect that isn’t white, I think it’s reasonable for some builds of Pod that were using Harmonic Sliver to switch to this. 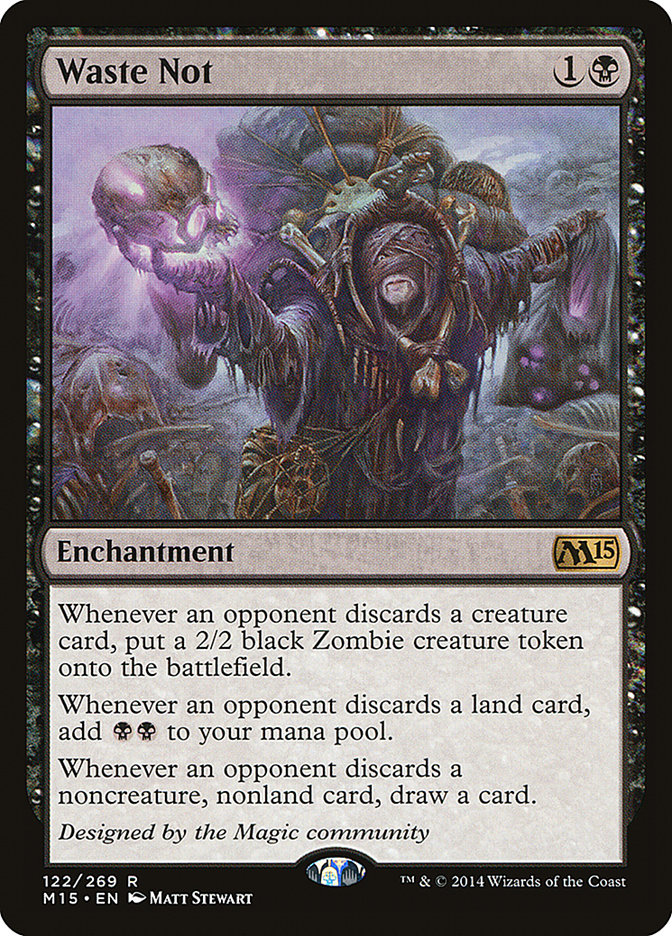 I mentioned this one last week. Thinking about it more, it’s probably better than Liliana’s Caress, and the less you’re making them discard, the more this is better, and that’s the exact way it wants to be better, because you don’t want to have to plan to make them discard 5+ cards over the course of the game. Also, drawing extra cards off this actively helps you make them discard more to keep triggering this. I think there’s potential here. 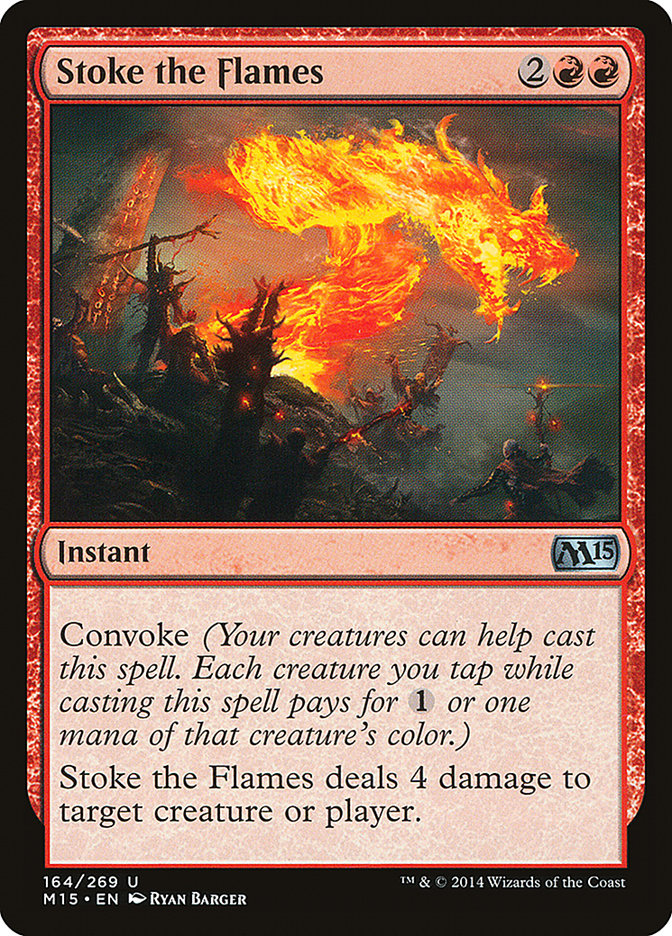 I’m not an expert on this kind of thing, but maybe there’s a red aggro deck that wants this kind of reach. Tapping four creatures to deal four damage is obviously pretty bad, but if you play this, you’re expecting to tap 0-2 creatures to play this, and you’re just happy that you can play your four-point burn spell while you’re stuck on two lands some portion of the time. It’s worth noting that you can use a Keldon Marauder that’s going to die to cast this during your upkeep. 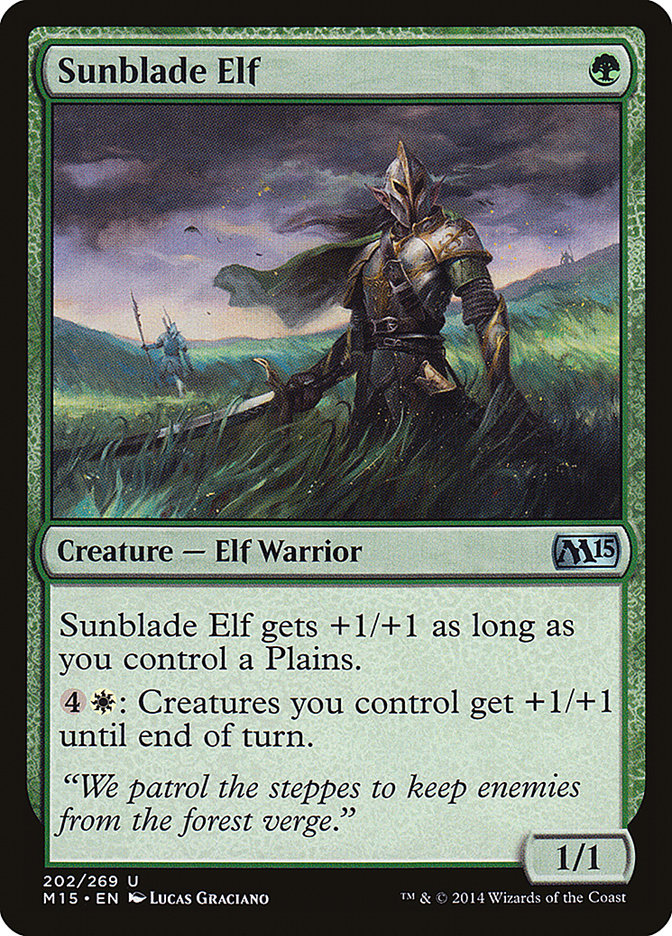 I’m not terribly optimistic about this one, but it wasn’t too long ago we’d see some copies of Isamaru, Hound of Konda in Zoo decks, and this has to be better than that. The fact that it’s an Elf that gives you Overrun options in an Elf deck also helps its chances. 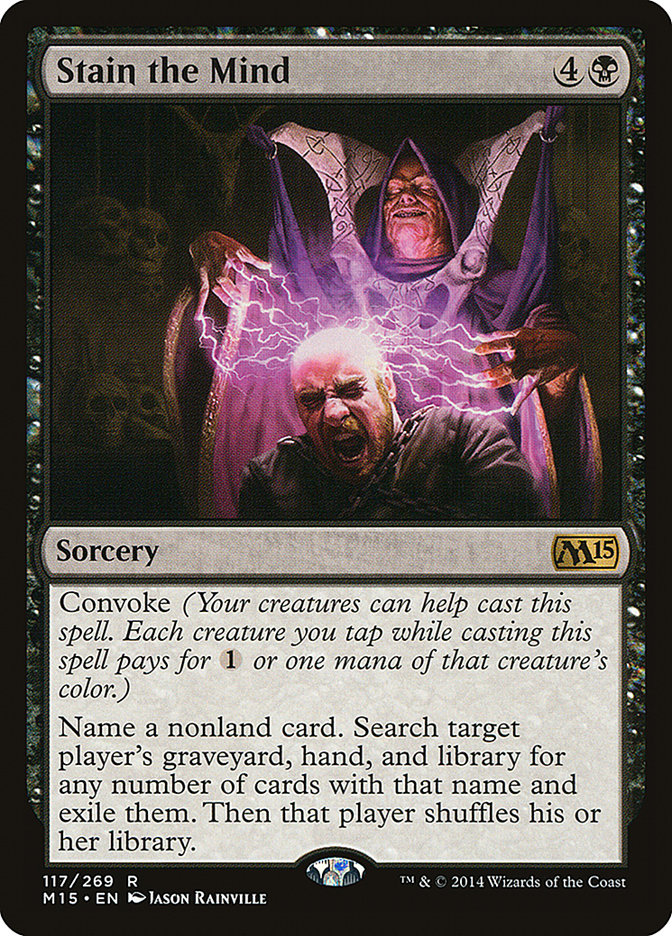 Nothing terrible new or exciting, but this effect has consistently been good enough to sideboard, and some decks are definitely willing to put a higher casting cost on it to buy Convoke.

I think those are most of the hits for Modern that have currently been spoiled. The barrier to entry in terms of power level on a new deck in Modern is incredibly high, but I’d love to see some kind of blue artifact deck make a dent.