My deck in the second draft was decent but not great. I was a little disappointed after the draft because I’d passed a lot of great cards—it was a weird draft. As far as I can tell, very few white cards were open in pack 1, and no one was in white so I saw a lot of amazing white cards in packs 2 and 3, including a pack in which Phalanx Leader and Gods Willing were two of the five remaining cards. I’d opened Aberrant Overlord and taken it over Lightning Strike and then moved into green for Voyaging Satyrs, so I was definitely not in a position to switch into a white heroic deck.

Instead, I found myself with the following deck: 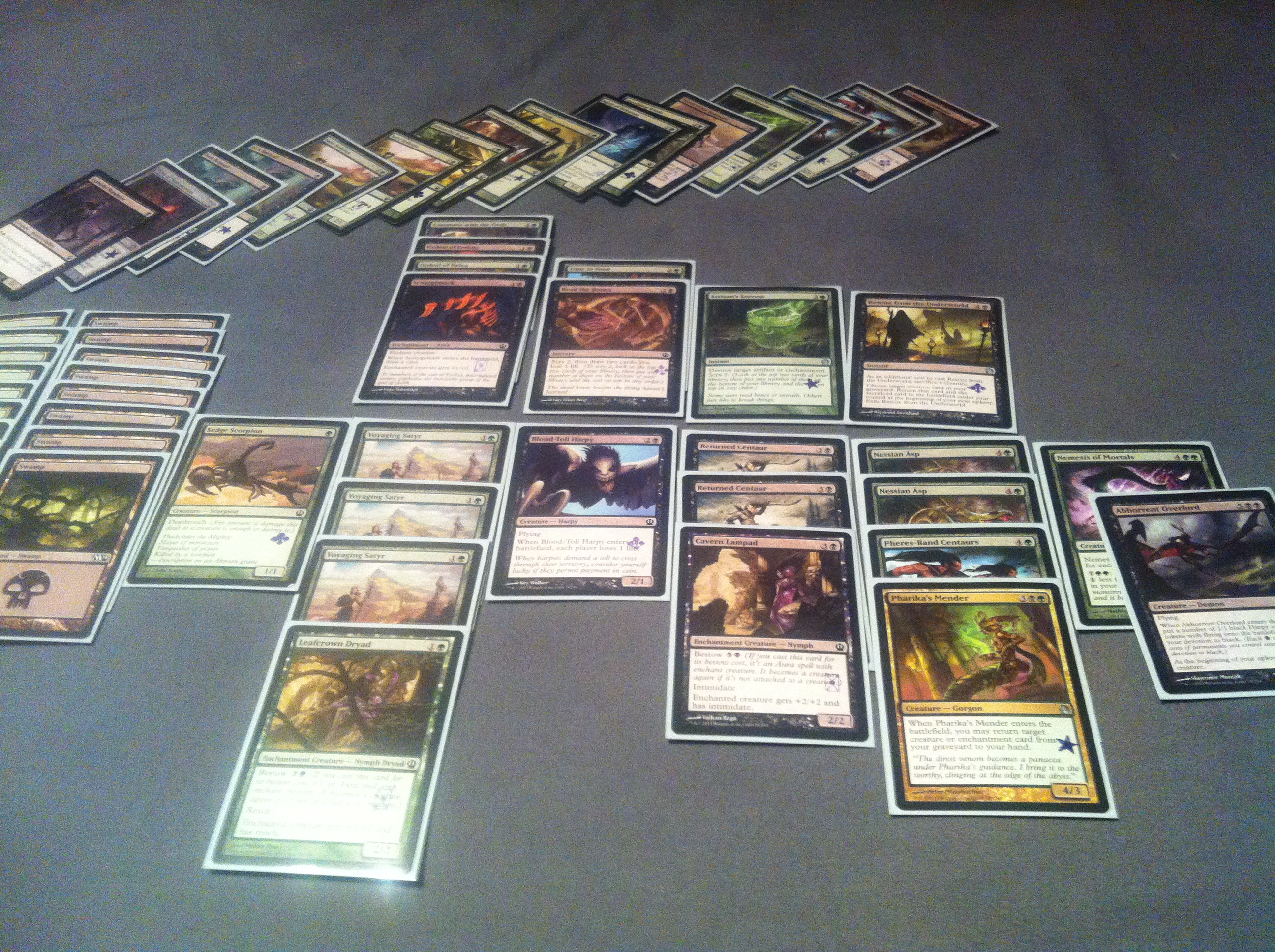 The cards across the top are the cards that I didn’t play but sided in or considered siding in during the three rounds I played in the tournament or the casual games that I played with it outside of the tournament. I’m sure I had every card I drafted except for four in my deck, which were three off-color cards and the second Commune with the Gods, and it’s possible I brought in the Commune at one point.

Let me start by saying I misbuilt this deck. I thought the Ordeals would be good since they’re powerful cards and I had some cheap creatures, but they were the complete opposite of my deck’s primary game plan. I didn’t have enough experience with this kind of deck. I wanted my curve to look better by having more cheap spells, and I wanted the extra black permanents even though it never really mattered how much devotion to black I had when I played the Aberrant Overlord. It was clear in each match I played that I didn’t want them, and I was able to identify that. But it should have been clearer in deckbuilding.

That said, they’re generically powerful proactive cards. I was siding them out for reactive cards to counter different strategies, and all the cards I was bringing in would have been much worse in the wrong context, so it’s not actually completely clear that it was wrong to try to steal game 1s with Ordeals and then side them out when I built a cohesive plan against a particular opponent, which is what ended up happening.

This brings up an important principle in building and thinking about sideboards in general: merely siding the same card out against absolutely everyone does not mean the card shouldn’t be in your maindeck. Pre-sideboard games are a very different animal than post-sideboard games and generally demand thinking about a deck in a completely different way, and that way will often require general-purpose proactive cards that aren’t the best thing you can be doing against a known opponent, especially one who already knows about those things.

I think of this as the Scion of Oona / Jace Beleren principle from Faeries. It’s likely that at one point I had a list where my plan was to cut Scion of Oona and side in Jace Beleren against every single opponent, and I don’t think that my deck was misbuilt or that my plan was wrong. In game 1, I needed to kill them and exploit my tribal synergies, and Scion of Oona did that perfectly. But in game 2, I wanted to answer their strategy and knew that they would be answering mine, and too often Scion of Oona would be stranded by itself, making it a horrible card, and Jace Beleren would be at its best, always finding me the perfect answers.

I think this deck is an excellent example of a Limited deck that uses an incredibly deep sideboard, maybe the deepest I’ve ever used.

A lot of those cards also might not be the kinds of cards you imagine when you think of "sideboard cards," though obviously some are, so let me talk through where I used these cards.

In my first match, I played against a U/B Control deck. This felt like the best possible matchup for me. I was able to side in my Dark Betrayals, Shredding Winds, March of the Returned, and Artisan’s Sorrow (largely because my opponent had Whip of Erebos). I may have also brought in more Pheres-Band Centaurs. This gave me answers to anything he was really threatening me with and meant that the game would be about both of us dropping monsters and answering the other’s monsters.

I had more monsters, and they came out faster thanks to Voyaging Satyr; I could also get them back with March of the Returned, Rescue from the Underworld, and Pharika’s Mender. He had a lot of 1/3s and 2/3s that were completely outclassed and not fast enough to kill me before the game got bigger than that. The matchup felt like one of the most unlosable I’ve ever played in Limited.

In my second match, I played against a U/R Tempo with Wavecrash Triton, several bestow creatures, some tricks/removal, and a smooth curve of aggressive two-, three-, and four-drops. I wasn’t worried about him killing my creatures; I was worried about him bouncing and tapping them. I needed to make sure I didn’t lose to fliers, which Nessian Asp goes a long way in doing.

I sided in Shredding Winds, Pheres-Band Centaurs, Artisan’s Sorrow for his bestow creatures, and Savage Surge, which I was particularly excited about because he had Triton Tactics and Wavecrash Triton so untapping a blocker could be absolutely game breaking. I cut my enchant creatures, including Cavern Lampad, because they’re obviously horrible against bounce spells and I didn’t really need to be aggressive. I just needed to set up enough defense that his tricks couldn’t get him through and overwhelm him with monsters.

This sideboard plan would have worked beautifully if I’d drawn my fifth land in game 3 when I kept a four-land hand that was really relying on casting five-drops. Instead, I just drew more five-drops and died to his Ill-Tempered Cyclops.

In my last match, I played against an extremely aggressive nearly mono-red splashing white deck. He had cards like Minotaur Skullcleaver, and I just needed to stay alive. I sided in all my cheap creatures and Defend the Hearth to try to stay alive. I wasn’t worried about any of my attrition cards; I just wanted to drop my curve and preserve my life total because a few 4/5s and 3/7s would be able to win if I lived to get them in play without needing any extra support. Unfortunately, again I lost to mana issues in the third game. This time I kept three Swamps and a Read the Bones, and despite digging with Read the Bones, I was unable to play a Forest before I had five Swamps in play. It was exactly one turn too late when I finally drew one.

I lost to mana issues, but I lost because I drafted a deck that needed five mana in a format where some decks can operate smoothly with two. I also probably should have played ten Forests and seven Swamps and definitely should have sided in another Forest when I brought in all those cheap green creatures. I didn’t, and there’s a greater than 50% chance that I lost because of that since I’d seen over half my Swamps and would have won if one of them had been a Forest.

I felt good about my deck after sideboarding, and I think I drafted well enough to make the Top 8 of this event. I just sideboarded and built my deck very slightly wrong, and it cost me.

Later I played some other matches. One of them was against a G/W deck with a lot of Hopeful Eidolons; Nylea’s Disciples;  Nylea, God of the Hunt; and Bow of Nylea. It was easy for me to get enough blockers in play that this deck couldn’t really kill me even with enchanted heroes and Nylea, but it felt really difficult to actually win against such a high life total and large and/or indestructible blockers. So my plan was to win by decking.

This is a little difficult against Bow of Nylea, so I brought in my second Artisan’s Sorrow to answer it and knew to save them for that while playing. I brought in March of the Returned to reuse my Returned Centaurs and Pyxis of Pandemonium to use as a Ghoulcaller’s Bell (though I could also realistically use the second ability to flood the board with monsters or more importantly put Returned Centaurs into play to mill the rest of the way). It’s not necessarily easy to get my Returned Centaurs in the graveyard to reuse them once my opponent is on to my plans, especially against a lot of 3/3s, but I planned to just sac them to Aberrant Overlord and get them back if it came to it. This plan worked delightfully, and having Pyxis of Pandemonium in play was very fun.

I also played against a B/R Minotaurs deck that was fast enough that I had to drop my curve again, but this time I could bring in Dark Betrayal. I also brought in Loathsome Catoblepas, which is a card I’ve generally been very happy with against B/R (and no other decks). My opponent brought in Prowler’s Helm, which also contributed to my loss in the last round of the Grand Prix, and it was still a bad matchup.

With the exception of dedicated sideboard cards, I think people don’t spend enough time thinking about how the cards they end up leaving out of their decks will actually play out in most of their matchups. Satyr Hedonist is a horrible card in a G/B deck that Voyaging Satyrs a big creature into play, but once I know that my opponent is playing three-mana two-toughness creatures that I need to block the turn they come down, suddenly playing a 2/1 for two just to try to buy time doesn’t seem so bad.

It can be very difficult to figure out one’s strengths as a player. I’ve been doing extremely well lately—well enough that I’m confused by it because I still don’t feel like I’m the tightest technical player. I sometimes miss things or fail to think through what my opponent’s plays are telling me they’re holding because I’m too focused on my side of the game. I think my biggest strength comes in formulating big-picture game plans and using those to sideboard properly. I think this draft was a great example of how that can play out in Limited.