Now that the full set of Rivals of Ixalan is out, there’s
reasonable context for evaluating the set. It’s important to remember that Rivals is not Ixalan. Yes they are drafted together and
are the same world, but the formats could end up being quite different.
Remember how blisteringly fast Amonkhet was? Everybody expected Hour of Devastation to follow suit, but that format ended up being
one of the slower ones.

At the same time, there’s no need to approach Rivals of Ixalan as
if it’s a blank slate. There will be similarities between the cards we’ve
been playing with, so there’s already a fair amount of data to feed your
intuition. After grazing over the full set, I came to the following
conclusions.

Usually at the beginning of a format I assume that every color is close in
power level. However, for Rivals of Ixalan, I think there are two
colors that are fairly disparate from the rest. 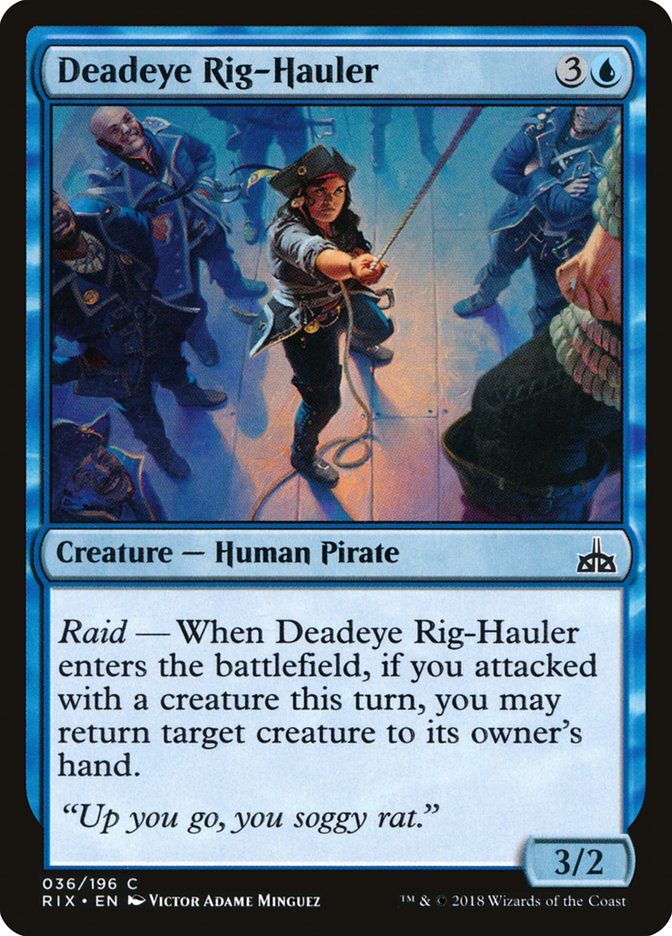 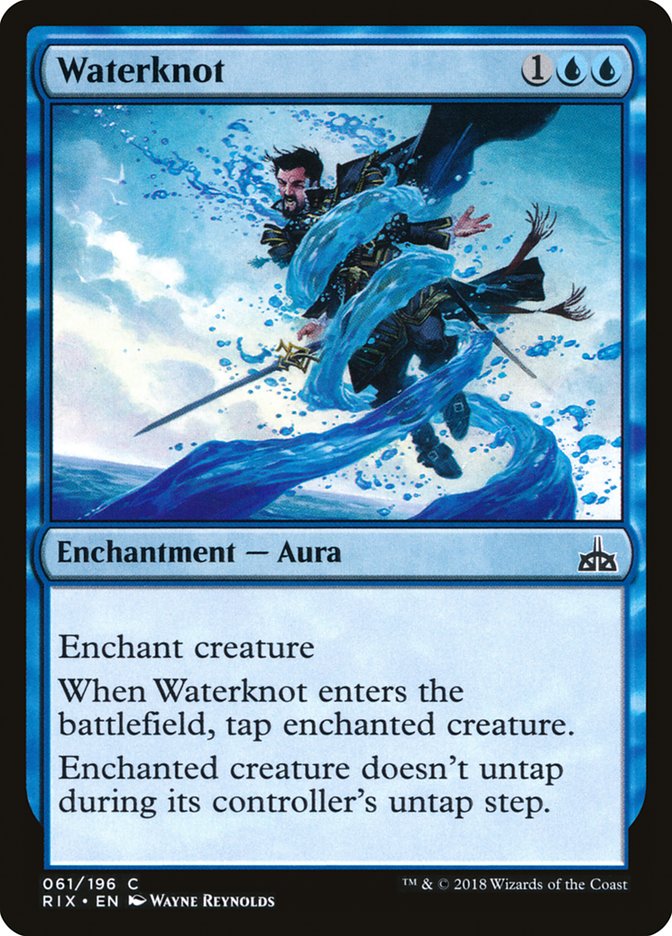 I’m expecting blue to be the best color by a country mile. That may be a
bit bold for not having played with the set yet, but the commons are just
so unbelievably good. There are two phenomenal interactive spells at common
in Crashing Tide and Waterknot, and the sheer quantity of evasive threats
is impressive. This means not only will blue decks easily maintain tempo
advantage, but they will easily turn on raid for another spectacular blue
common, Deadeye Rig-Hauler.

This doesn’t mean you can’t draft other colors either. Draft is
self-correcting, and if blue really is so much better than everything else,
it’ll be overdrafted and even out. Most archetypes look supported and
viable, but to be honest, black seems like it’s lacking. 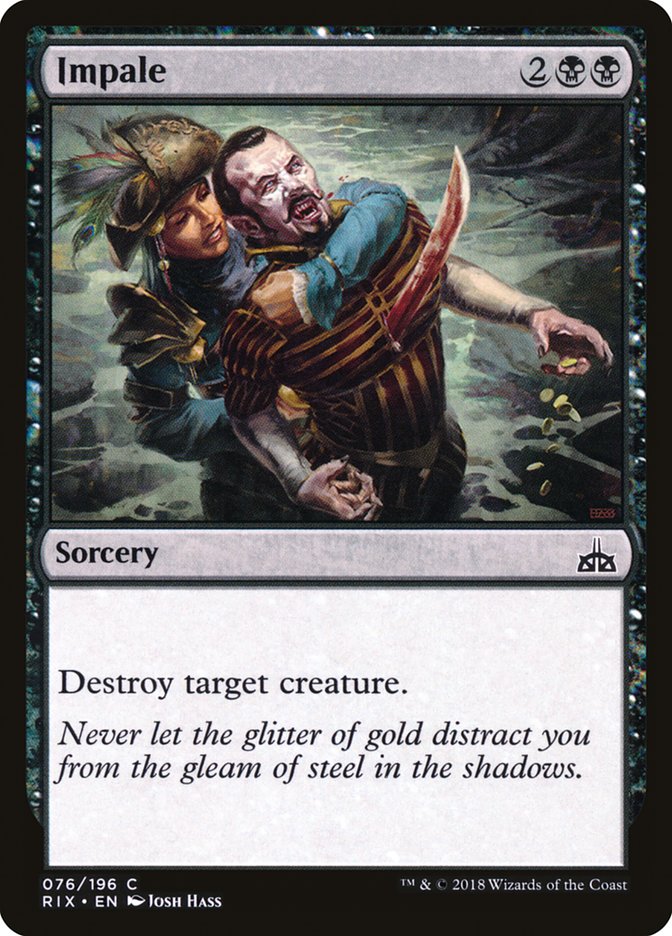 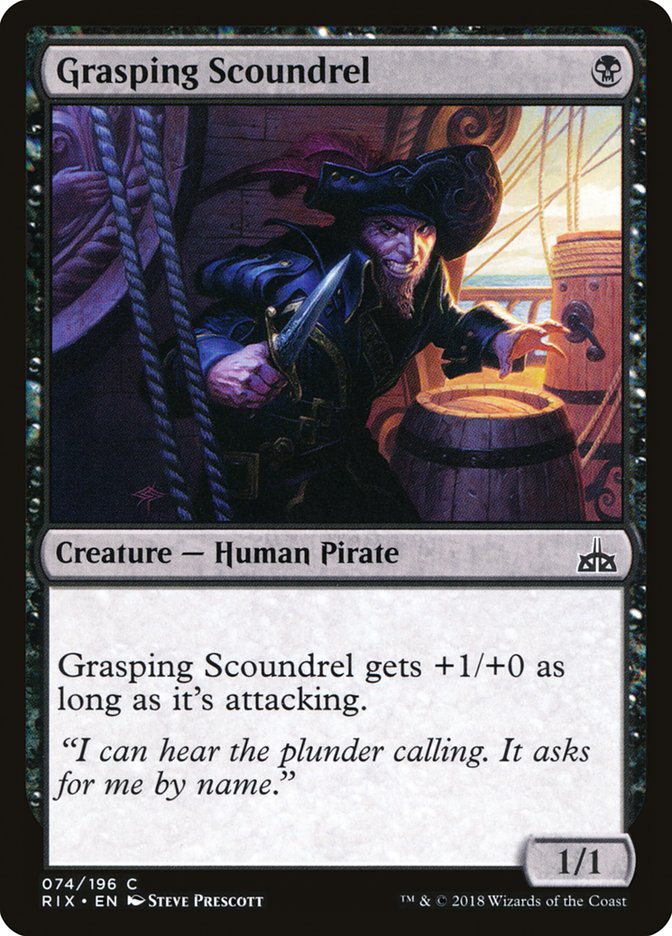 The only black common that I can see myself taking early is Impale. It’s a
solid removal spell, but that’s about it. The rest of the commons just seem
somewhat replaceable. It’s possible that if the format really is fast,
Grasping Scoundrel will be efficient enough to help black in an aggressive
world, but for now I’m skeptical. I’m not going to write off black just
yet, but let’s just say I wouldn’t be surprised if Ravenous Chupacabra ends
up being significantly worse just because of its mana cost.

This format could end up being very fast. Ixalan was referred to
as a fast format because it wasn’t uncommon to die to an unanswered One
With the Wind. However, I don’t actually believe Ixalan was that
fast, as a fair majority of games went on for seven or more turns. Rivals of Ixalan looks like it has the tools to speed this up.
There are an abundance of good, cheap plays (including one-drops), and
there are plenty of ways to gain tempo. 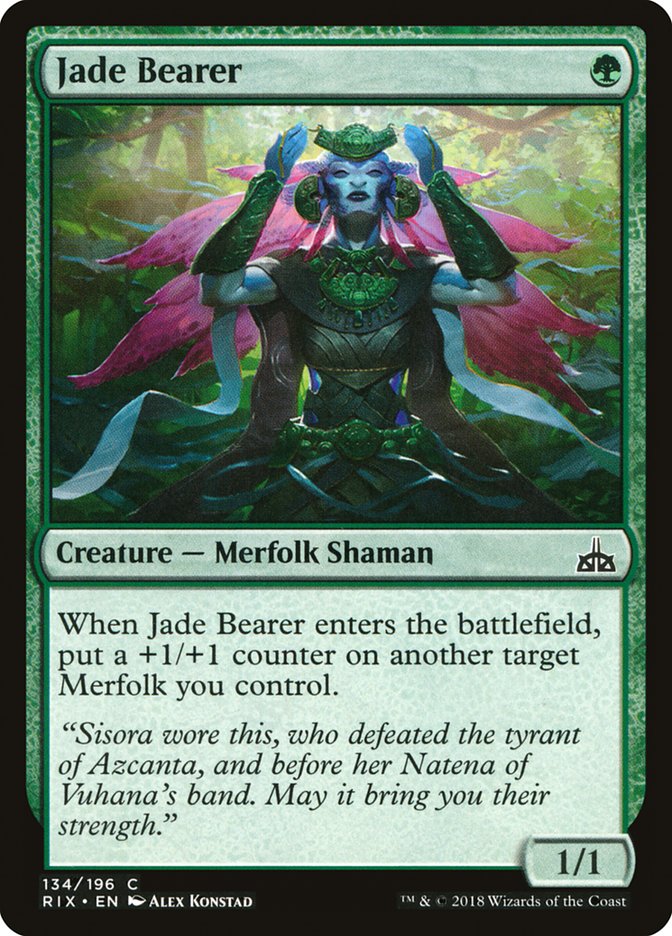 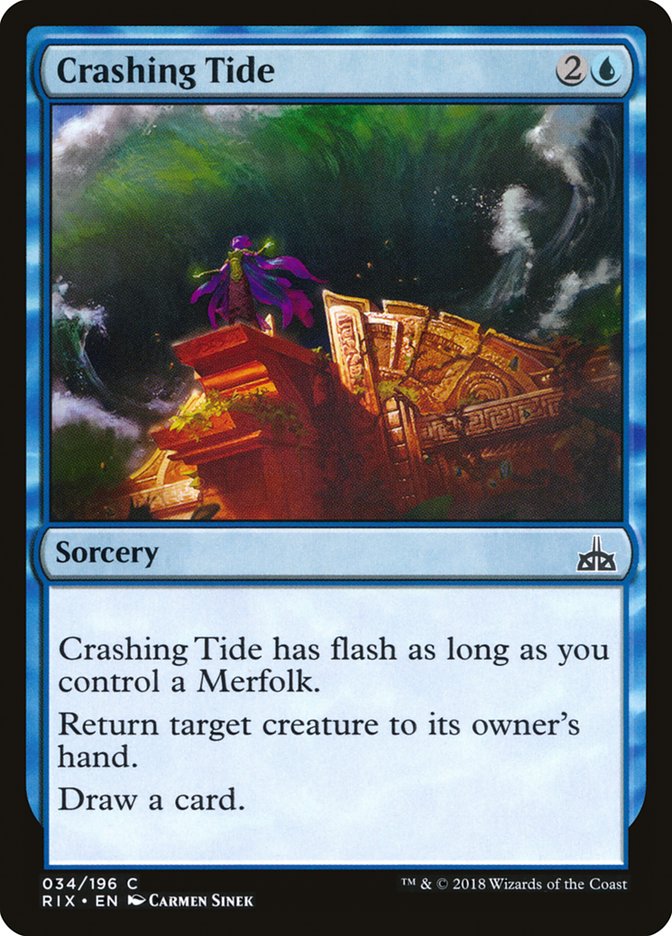 One of the best things an aggressive deck can do that other decks tend not
to be able to do is casting multiple spells on the early turns. Casting a
three-drop along with a one-drop on turn 4 is such a large tempo advantage.
Imagine playing against Merfolk where their turn 4 is Crashing Tide
followed by Jade Bearer. That is such an unbelievable tempo gain.

It’s entirely possible that the abundance of ways to deal one damage to
creatures substantially weakens the aggressive decks in the format, but if
those aren’t all over the place, I’m expecting the potential tempo swings
from aggressive curves to be a defining aspect of this format.

Lastly, there are a couple cards that I believe will be overrated at the
beginning of the format. So while they may look quite good, I don’t think
they’re as good as you think. 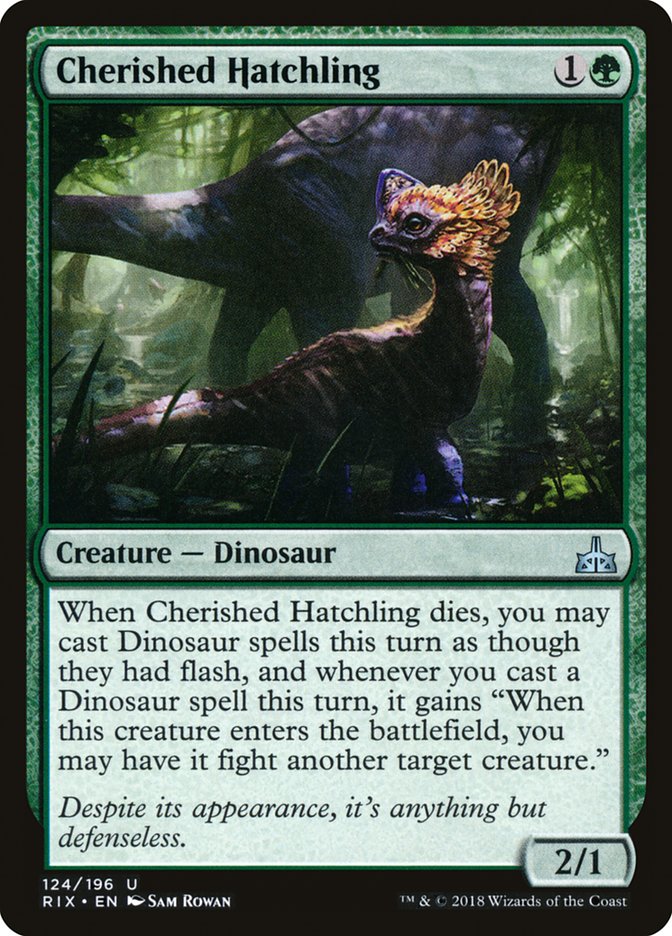 First off, this card is adorable. Unfortunately, it really doesn’t do all
that much even though the text-box is so full. Cherished Hatchling has a
very powerful ability, but the problem is that your opponent controls when
it dies. If you pass with mana up, your opponent isn’t just going to let
the Hatchling die to enable you to play your Dinosaurs with flash. I think
this little guy is going to play out more like a 2/1 that your opponent
will only block under specific circumstances. That card isn’t the worst,
and Cherished Hatchling does have a relevant creature type as well, but
it’s not actually a great card. 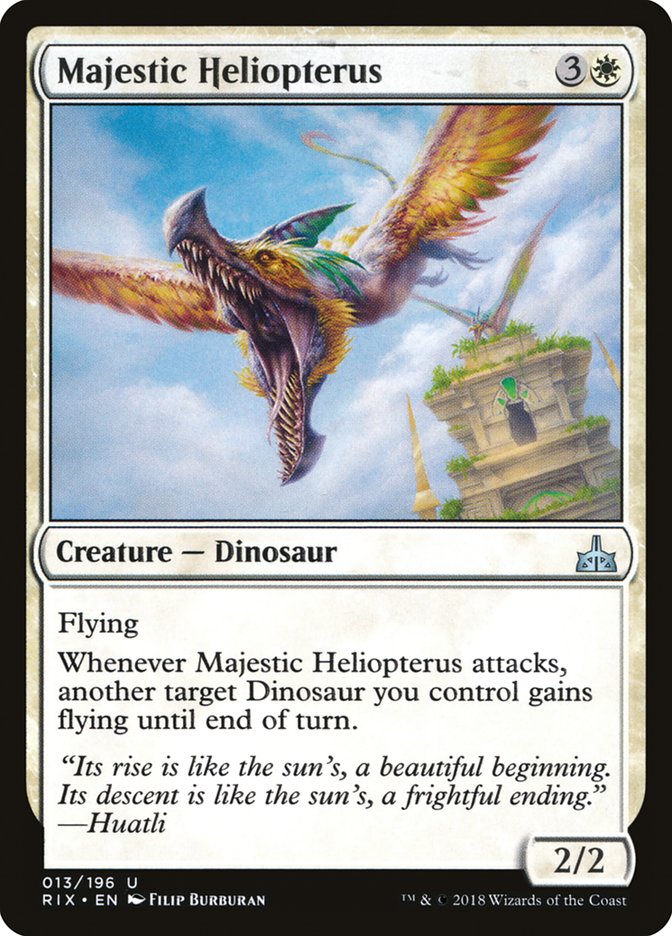 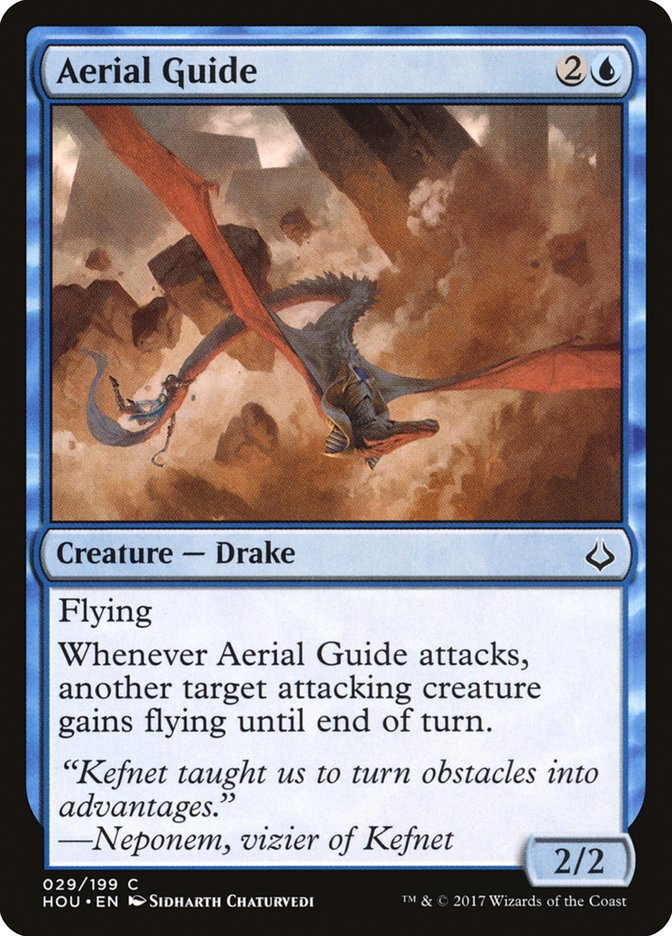 Majestic Heliopterus is almost just a worse version of Aerial Guide. It
can’t go in any deck and is one more mana. Those are both pretty large
downsides. Majestic Heliopterus reminds me of Imperial Aerosaur, and I
think that’s why it’ll be overrated. This comparison makes it look
substantially better than it is. Don’t get me wrong, the card can be quite
good; but it’s not a card I’m looking to take early as it’s both narrow and
overcosted.