Previews for Ixalan have finally started. A whole new format is
always exciting, as we’ve been playing in the world of Amonkhet
for quite some time. This new format has a tribal focus, but for now I want
to go over the mechanics showcased by a new common in the set. For the next
couple weeks it’s all about card evaluation!

We saw this mechanic back in Khans of Tarkir, and it plays very
well in Limited. Most decks are chock-full of creatures, so the bonus
rarely requires extra work! 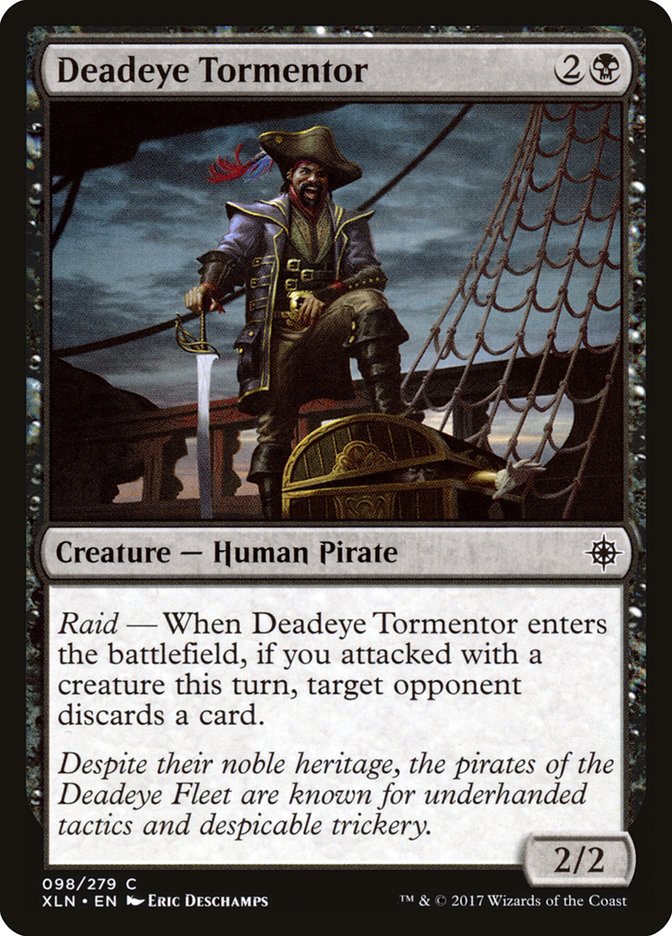 This card is interesting, as three mana for a 2/2 is just such a terrible
rate nowadays. Tack on the ability to make your opponent discard a card,
and now it’s a card I would include in most of my Limited decks. I doubt
this card will end up being in black’s top couple commons, but it seems
like it will be solid filler. When you’re getting the ability for free
because you have good attacks, it’ll be slightly an above-average card. But
it isn’t always trivial to enable Raid.

The main thing that you should remember regarding Raid is to be on the
lookout for chump-attacks. It’s possible that your opponent is bluffing a
combat trick solely to enable Raid.

Enrage is a new mechanic that triggers whenever a creature with Enrage is
dealt damage. You should note that this is not only combat damage, so
removal spells that deal damage can have additional modes when pointed at
your own creatures, and potential downside if your opponent has a creature
with Enrage. 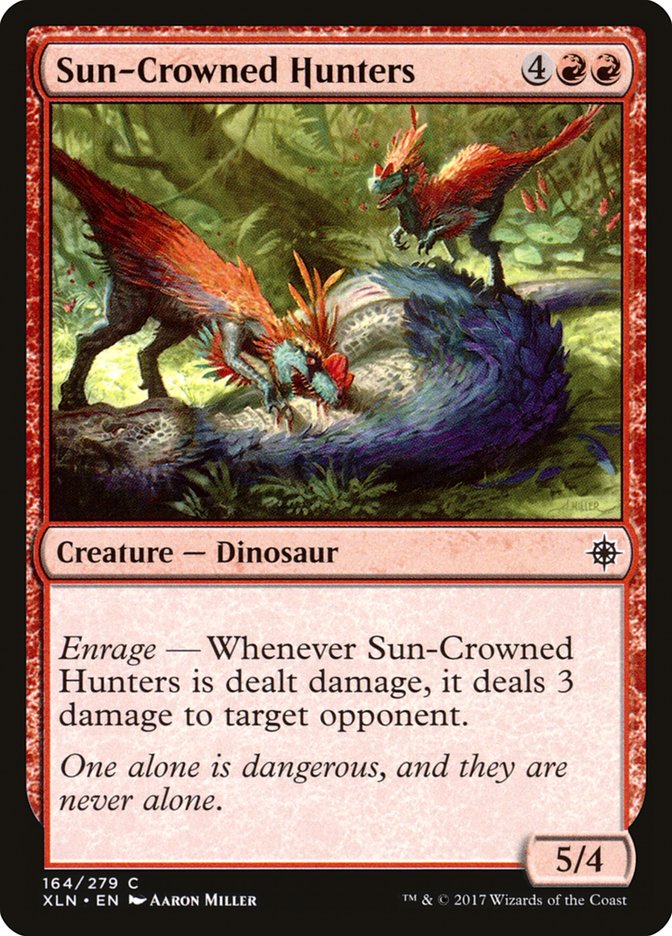 Incidental damage can go a long way in Limited. Now, six mana is way more
than you should be paying for a vanilla 5/4, so I don’t expect this card to
be great. One of the downsides on the vanilla beater is that it can be
chump-blocked. At least here, your opponent can only throw creatures in the
way for a limited time, and I expect that to be a similar case for other
Enrage creatures.

Overall, Sun-Crowned Hunters is just too inefficient of a body for the
cost. While it can give you a non-negligeable bonus on blocks and is a
reasonable attacker, it just isn’t good enough to justify taking with any
priority. Maybe it’ll make the deck some portion of the time, but I would
want to take this card after it wheels.

Treasures are effectively just token copies of Lotus Petal. There are
plenty of cards in Ixalan that will produce these, and they may
have a large effect on the format. With enough treasure-making cards,
splashing becomes trivial and playing more expensive cards becomes
substantially easier. 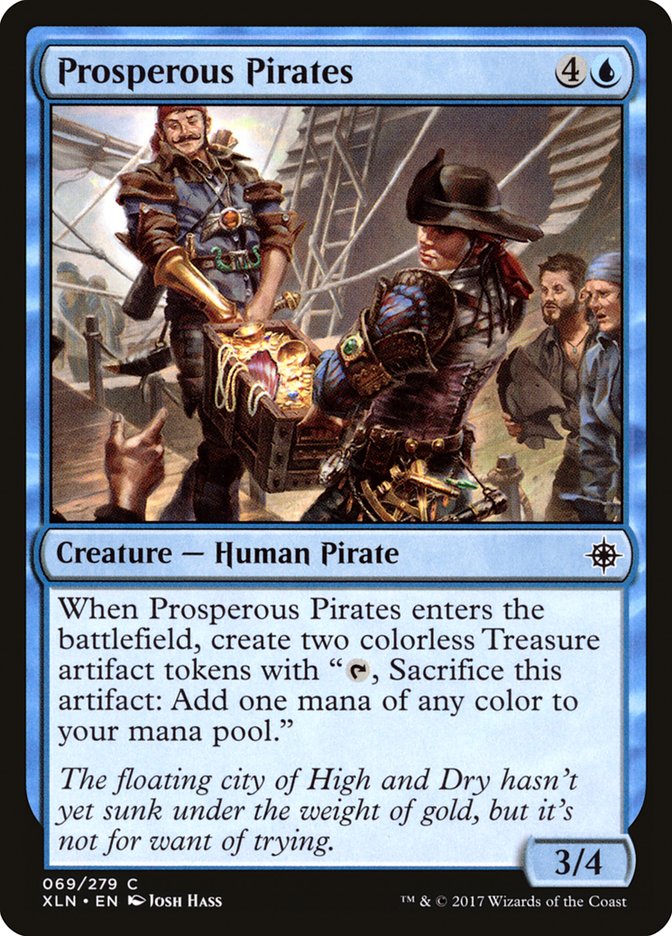 This card is going to be very deck-dependent. In general, five-drops are
replaceable and can never be that good unless they do something
insane (Glorybringer).

So I definitely don’t expect this to be one of
blue’s top commons. But at the same time, the card may function similarly
to Oasis Ritualist, which ended up getting similar initial evaluations and
was a top green common in Hour of Devastation.

These cards are entirely different and in different formats, but it’s good
to be aware that if the best deck is some five-color shenanigans, and that
the 3/4 body is better than usual, this card may overperform substantially.

Explore is a modal-like mechanic. When a creature explores, you reveal the
top card of your library. If that card is a land, put it into your hand;
otherwise the creature gets a +1/+1 counter and you can choose to keep that
card on top of your library or put it into your graveyard. This mechanic
has a lot going on, so let’s just take a look at how it looks on a card. 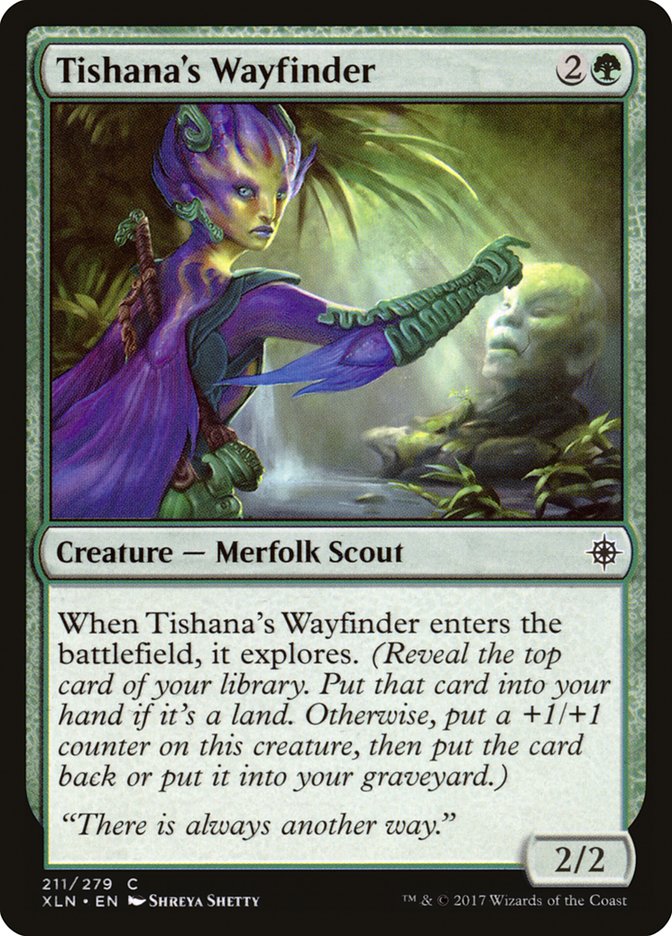 Depending on how explore cards are costed, this could be the most powerful
mechanic of the set. Tishana’s Wayfinder is one of two cards. Either three
mana for a 2/2 that draws a card, or three mana for a 3/3 that lets you
scry 1. It’s slightly different as the card you draw must be a land and the
card you scry must be a spell, but it’s a close enough comparison.

Both options are cards that would make the cut in my average Limited decks,
and the 3/3 that comes with a scry would be one of the better green commons
if it was that every time. I expect this card to be quite good, something
I’m looking to take around pick four or five to solidify myself in green.