For the first time in the race to the Players’ Championship, the StarCityGames.com Open Series will be lacking the Return to Ravnica Block on Saturday.
That means no more Sphinx’s Revelation, Pack Rat, Domri Rade, or Voice of Resurgence. For Ross Merriam, that means no more Nightveil Specter, Frostburn
Weird, Tidebinder Mage, and the rest of the core of Mono-Blue Devotion – the deck he has piloted to two Standard Open Top 8s, including a win in Providence
in June.

Merriam, the fourth ranked player on the #SCGPC Season Four leaderboard and basically a lock for the Players’ Championship, will be looking for something
new to continue his success in Standard. Merriam has played Mono-Blue Devotion and Elves exclusively for the past year, notching five Open Series Top 8s
this year, the first coming in the Legacy Open in December in the first Open weekend of Season Four in Las Vegas.

With Khans of Tarkir Standard kicking off this weekend in Edison, NJ and Indianapolis, IN for a double Open Series weekend, Merriam will be battling in New
Jersey, but it will most certainly be without Thassa, God of the Sea at his side. For Merriam, a theory-based player if there ever was one with a degree in
mathematics from Harvey Mudd College, switching decks is a big deal. Merriam openly admits to being the type of player that learns one deck, perfects it,
and sticks with it as long as he can. His mastery of Elves in Legacy highlights his proficiency with the deck, accumulating five Open Series Legacy Top 8s
with it and a Top 16 at Grand Prix Providence in 2011, a finish that qualified him for Pro Tour Philadelphia.

Legacy hasn’t changed, but Standard definitely has. What will the newly-minted StarCityGames.com columnist be sleeving up this weekend? He isn’t sure just
yet, but he has been testing diligently this week looking for the right choice. The format, in his opinion, is shifting to three distinct strategies.

“I think the three pillars of the format will be low-curve aggressive decks like Rabble Red and Mono-Black Aggro, the green ramp decks, mostly devotion
based, and black-based midrange decks with Thoughtseize and Hero’s Downfall,” Merriam said. “Those are the archetypes we are expecting off the bat. And of
those, I think the green devotion decks have been performing the best, but I am surprised by how good the aggro decks are. There is a chance the aggro
decks will be underrated, despite the common knowledge of people knowing aggro decks are the best at the start of a format.” 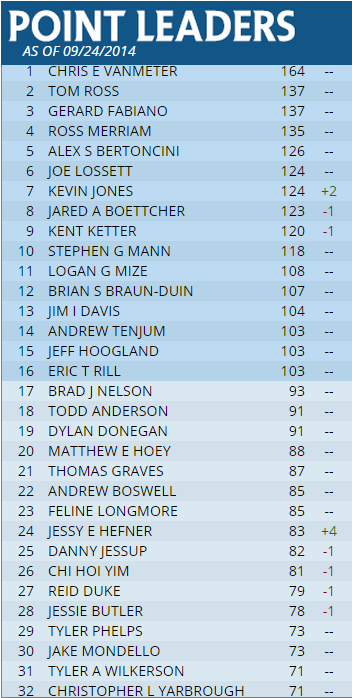 It wouldn’t come as a surprise to see Merriam running a creature deck this weekend; his math background has helped him excel at complex combat scenarios
where boards get crowded with creatures. Merriam pushes his skillset one step further in his testing process, utilizing a scientific method for his testing
processes. His playtesting revolves around solving matchups via making a hypothesis and playing until he confirms or denies his original intuition. Instead
of jamming endless games, he knows what he wants to finds out then asks another question.

Though Merriam has been playing Magic competitively for more than a decade, he credits his education at the private college just east of Los Angeles for
his success. While he had moderate success before going to school out west, including multiple PTQ Top 8s, his game improved vastly after his time at
Harvey Mudd. Incidentally, a short break from the game while he focused on his studies marked the largest improvement on his game.

“The odd thing is, I got a lot better at school despite not playing a lot -just from my education,” Merriam said. “I improved my analytical and critical
thinking to the point where I was seeing lines of play and understanding the game at a very different level and was able to dissect problems in game play
and deckbuilding at a much higher level than before. It’s funny, but I tell people I got a lot better while not playing.”

After graduating, Merriam shifted his focus toward Magic again once he decided he didn’t want to pursue a Ph.D. in math. He described the move as a desire
to put his efforts toward something “vaguely constructive.” His increased focus on the game happened the summer before the printing of Scars of Mirrodin.
The work immediately paid off as he won his first PTQ in Scars of Mirrodin Limited, leading to playing in his first Pro Tour in Paris in 2011. Since then
he has played in three more Pro Tours with his highest finish coming at Pro Tour Dark Ascension in Honolulu, where he finished 65th – his first Pro Tour
cash.

Merriam missed out on qualifying for his fifth Pro Tour by going 12-3 at Grand Prix Boston in July, but has been on an absolute tear on the Open Series the
second half of the year. He followed up his Standard Open win in Providence with a runner-up finish in the Legacy Open later that day, falling just one
game short of winning back-to-back Opens in the same weekend – a feat only Gerry Thompson has managed to accomplish. Merriam continued his success with a
Standard Open Top 8 in Baltimore and another second-place finish in the Legacy Open in Somerset, NJ at the Season Three Invitational. His five Open Top 8s
this year are only surpassed by Chris VanMeter’s six, and Jared Boettcher’s absurd eight, including three Invitational Top 8s. 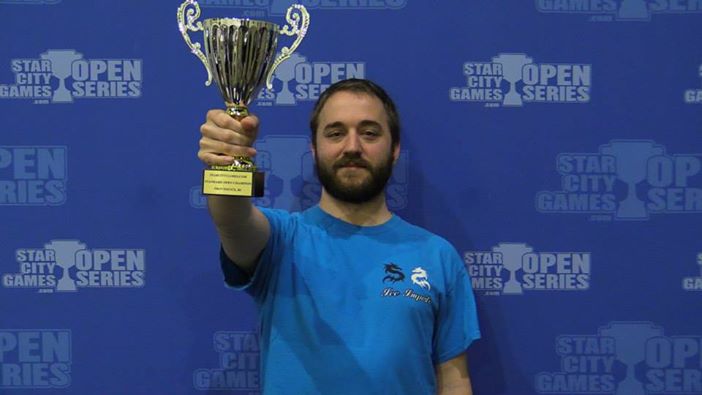 Ross Merriam poses with his trophy after winning the Providence Standard Open.

Merriam’s success on the Open Series isn’t out of nowhere, as his work in 2012 was also impressive. Merriam won the Indianapolis Standard Open that year
with U/W Delver and made three other Top 8s, utilizing U/W Delver and Maverick in Legacy that year. After a rough 2013 that included a couple near misses,
Merriam set his sights on the Players’ Championship the moment it was announced.

“I’ve actually had the Players’ Championship as a goal in my head since it was made public in Las Vegas in December and knew my best chance would be an
at-large spot,” Merriam said. “It has been on my mind for a while, and Providence shot me up in the standings and I knew qualifying was a real possibility,
if not probability, so I started scheduling around the Open Series. I’ve had some ups and downs from 2013, but my 2012 success shows this run doesn’t seem
as out of place as it might appear.”

Since his run toward the top of the #SCGPC leaderboard, Merriam has been putting in more work than usual to prepare for the Players’ Championship. Though
Standard will likely shift significantly between now and the Players’ Championship with a Standard Pro Tour and months of the Open Series before December,
Merriam is looking at his options for the 16-player invite-only tournament in Roanoke at the end of the year. His practice of sticking to one deck works
well for large events, but he is unsure if he wants to take Elves into the Legacy portion of the Players’ Championship because of the familiarity all of
the players will have with each other.

While Merriam still technically has to secure his berth to the Players’ Championship as the 8 at-large slots are determined with the final yearly standings
culminating with the Season Four Invitational in Seattle, his current position has him looking ahead.

“Everything about the Players’ Championship is exciting,” Merriam said. “Having a marquee event that the entire year leads up to is great because it
provides intrigue for people watching and adds incentive to follow it each week, which is great for SCG and players like me and a lot of the other
grinders. I knew it was something I thought I wanted to do when it was announced, and I thought it was something I could qualify for so the fact that I am
in good positon to qualify now is excellent. I’m excited to have the opportunity to play in it with all the great players already qualified and the who’s
who of people on the Open Series.”

Coincidentally, Merriam has become one of the more notable players on the Open Series this year. Followers of the Open Series gravitate toward star players
and those who stick to certain types of decks. Merriam has become both, known for battling with little blue and green creatures, while regularly appearing
the elimination rounds of Standard and Legacy Opens. His addition to the StarCityGames.com roster has bolstered his exposure and allows him to give back to
his growing fan base.

“One of my favorite things of the Open Series is that there are many more chances for people who follow the Open Series to meet the players they watch than
with the Pro Tour,” Merriam said. “It’s great to have a series that offers such a close relationship between the followers on it and the names on it. I
love meeting people, signing things, having people come up to me telling me they like my articles -that makes my day. This has been a highlight of my year,
entering that status of player on the Open Series.”