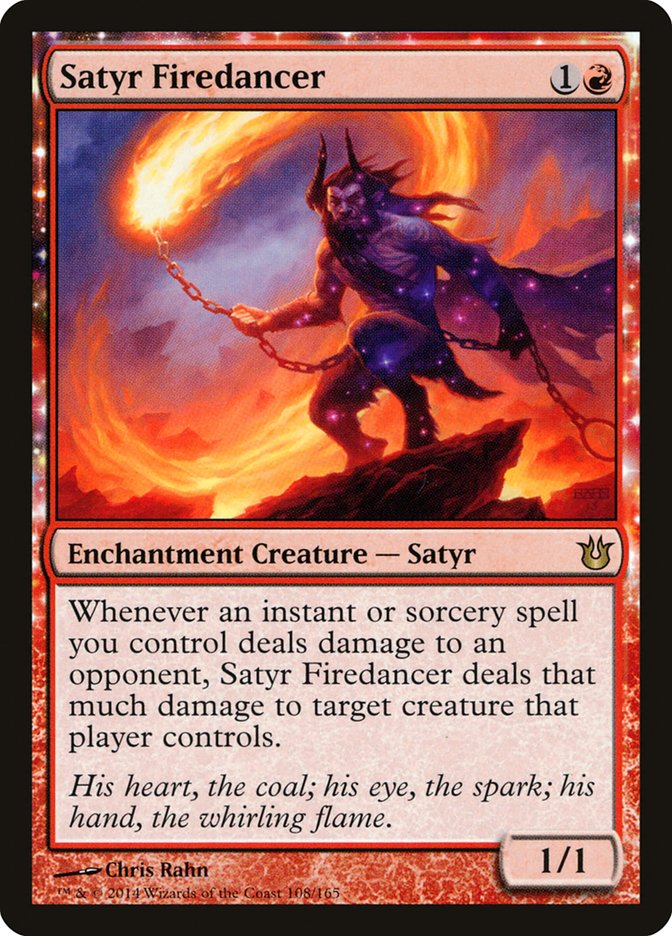 It sounded so perfect. They shouldn’t have much removal for this tiny creature since they’re so dedicated to playing permanents to fuel their engine. This would allow the burn deck to take over the game quickly and efficiently with every burn spell in your hand. When players didn’t dedicate their decks to devotion, they would have too much removal to put enough pressure on you before you burned them out.

This worked up until round 5, when I took three quick loses and was out of the event.

Why was this deck a bad choice? I won my first four matches and played a wide variety of decks. I don’t think it was simply my play since R/W Burn typically isn’t a deck that can outplay opponents that well. Before I get to the answers of why, I want you to take a look at every successful deck that I played over the last four years. Every single one of these decks has multiple things in common that R/W Burn does not. Try to figure it out. Do you notice the differences?

The answer is all of these decks are completely sweet! I hope you guys enjoyed this week’s article, and I encourage you all to root for me in Pro Tour Born of the Gods. I’ll see you guys next week!

The real answer is that all of these decks have a number of strengths that R/W Burn does not.

Going Over The Top!

I didn’t realize I had a specific style of deckbuilding until my best buddy Jacob Van Lunen pointed it out to me in Louisville a couple months back. We were having dinner after day 1, and I was on top of the standings with a 9-0 record. He was telling me that Mono-Black Devotion was a "Brad deck." I laughed when he said this because I never really play decks like Mono-Black Devotion. It’s filled with hand disruption, low-impact creatures, card advantage, and removal. I had just spent almost six months playing with Blood Artist, so I had no clue where he was coming from. Little did I know I was already type casted as a "kaboom" player in his eyes.

Jake was referring to Gray Merchant of Asphodel as the "Brad" card in the deck. He went on to explain that every deck I play has this over the top spell that just kills people out of nowhere. "I guess you’re right" was the only thing I could think to say because he was completely right.

It’s so important that your deck is able to do something extremely powerful, something over the top that is difficult to deal with. If you think about it, the best performing decks in the current Standard format all do this with cards like Stormbreath Dragon; Master of Waves; Sphinx’s Revelation; Gray Merchant of Asphodel; Xenagos, God of Revels; Flesh // Blood, Elspeth, Sun’s Champion; Aetherling; or Garruk, Caller of Beasts. All of these cards are extremely powerful, effective, and efficient at going over the top of the opponent and singlehandedly taking over the game.

Getting Back Into The Game

One of the most important things for a deck to be able to do is recover from disadvantages. Whether it’s a mulligan, tempo loss from a slow start, or temporary mana flood, a deck always needs to have cards it can draw to get back into the game. All of the decks I’ve had success with have extremely powerful topdecks that can get them back into the game. R/W Burn really doesn’t.

R/W Burn has no ability to come back from behind unless it gets extremely lucky. The more serious problem is that the deck has no real way to catch up, so the snowball effect of getting behind becomes amplified very quickly. There just aren’t any seriously good permanents or mass removal spells that help the deck catch up or attrition the opponent out. There’s no topdeck war that you have any chance of winning.

It’s extremely crucial in Magic to have the ability to win a game from behind. Your deck has to have the ability to topdeck something to help win the game. This allows you to play to specific cards when you’re behind. Without this ability, you lose so much equity in a tournament. It’s almost impossible to play an entire tournament without a poor draw or getting unlucky in any way.

Attacking From A Different Angle

This isn’t something that you can always do in Magic or something I will even suggest, but it’s a tactic I live by. I love bringing something to a tournament that no one expects or has a coherent plan against. This strategy sometimes backfires when a deck isn’t as good as I think it is, but it often comes with enough benefits to warrant the mishaps.

First of all, players often play incorrectly against me due to the fact that they don’t truly understand what my strategy is. This can cause confusion in who is the aggressor or what cards are important in the matchup, and sometimes that’s good enough if my opponent just plays one turn incorrectly due to the high level of powerful cards in my deck. As long as I understand how the matchup is supposed to play out, I strongly feel that I have the advantage game 1.

The other significant benefit is that most decks don’t even have the correct tools to deal with the threats I’m presenting. This makes it very difficult for the opponent to have smooth plays throughout the game and often forces them into clunky turns and losing tempo.

So what happens when we move to sideboarding?

Having The Better Sideboard

One of the biggest advantages that this particular list of decks had was the ability to sideboard in cards that completely changed the dynamic of how the deck functioned. Not only did this throw off the opponent, but they were all designed in a way to blank the cards the opponent would be bringing in to combat the maindeck. This was a huge edge in every event I played. This is also something R/W Burn cannot do.

Many of these decks were extremely difficult to sideboard against. Most of the strategies leaned on the fringe side of the metagame, helping out in this process due to my opponents not having high-impact cards in the sideboard to counteract my decks. They would do anything and everything to figure out a game plan, but that left them forgetting the fact that I also got to sideboard. Without coming into the tournament with a game plan against my deck, they couldn’t sideboard in a way to fight my own sideboard. This is probably the biggest edge you can get by going rogue as long as you do it correctly.

Sideboarding is without a doubt the most difficult aspect of Magic. I figured out quickly in my content career that the most beneficial thing I could do is give people in-depth sideboarding strategies against all the major decks when I write about new decks. It’s also something many players have a difficult time doing on the fly. That is unless your opponent is playing something extremely narrow like R/W Burn.

Linear strategies belong in Magic because they are very consistent and reliable. It’s easy to execute them, making them strong choices for many players. They’re often the easiest decks to understand when playing against them, so they tend to be easy to sideboard against.

Right now Standard is extremely predictable, but that isn’t because people haven’t been brewing enough. It’s because there really aren’t many ways to attack the archetypes that exist because all of them are playing at least one of the most powerful cards in the format. This means two things. One is that is that it’s extremely difficult to exploit the metagame with new strategies, but at the same time it’s extremely potent if you find a way to do so. Right before Born of the Gods was released, Michael Kenney did exactly that with his Big Boros deck when he took down the SCG Standard Open in Columbus:

Does this look like this is an easy deck to sideboard against? Do you think one of his biggest advantages was that his opponents didn’t know how to do just that? You’re correct if you thought yes to both of those questions. This was a very unique deck at the time and one that his opponents didn’t fully understand. This helped him out the same way that the list of decks I posted at the beginning helped me.

So what can you take away from this information? Well, for starters, I’m not telling you to play rogue strategies or that you need to play something unique and under the radar at every event you play in. That is just my preference. I took the most stock version of U/W Control to Baltimore and finished in the Top 4 of the Standard Open a couple weeks back. It’s not about the creativity.

The most important thing to take away from this article is the fact that power comes first. Synergy is important in most decks, but that is only because they’re trying to do something extremely powerful. Whether your cards do that on their own and you spend most of the game trying to dismantle the opposing deck’s strengths or you invest most of your resources into something extremely synergistic and hope it pays off, the only thing that matters is that you try to do something powerful. R/W Burn just isn’t that and breaks the golden rule of Magic:

This weekend I will be slinging spells in Valencia at Pro Tour Born of the Gods. I spent two weeks testing for this event and feel very prepared for the tournament thanks to my wonderful team. Even though I’m looking forward to this weekend, there is a large part of me excited to get back to Roanoke to not only make more Versus videos with Todd Anderson but also start breaking down Standard with some Magic Online videos showcasing whatever I think is the best. Be sure to check out me out once I get back because I personally am going to take responsibility for making this an awesome Standard format with some new strategies.

I just have to think of them first!