Now we’re really getting deep into the Aether Revolt draft format such that the intricacies of each archetype are unfolding. Before I get into today’s Draft Digest, I want to talk about a specific archetype: U/G. The general consensus has been green is the best color and white is the worst. There are some discrepancies, but most consider both blue and green to be in the top three. Yet in the beginning of the format I kept having less success with the U/G color combination than any other.

The thing is, energy took a big hit in Aether Revolt. In Kaladesh, energy was one of the best decks and there was a ton of payoff at uncommon for drafting around it. This payoff isn’t there in Aether Revolt. I tried the energy decks and they just weren’t working. I tried highly prioritizing Implement of Ferocity for an improvise version and that went quite poorly. 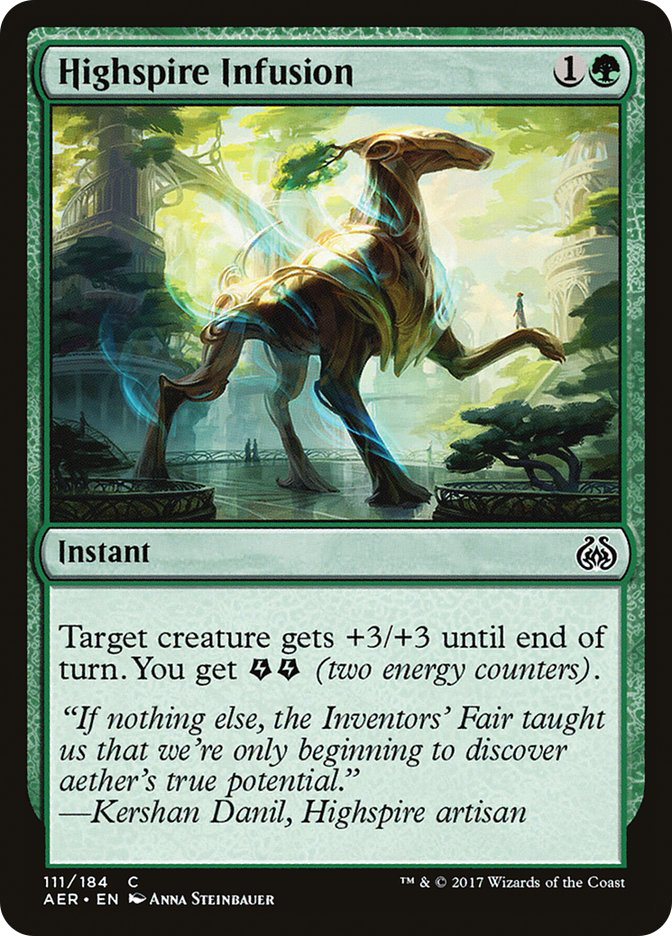 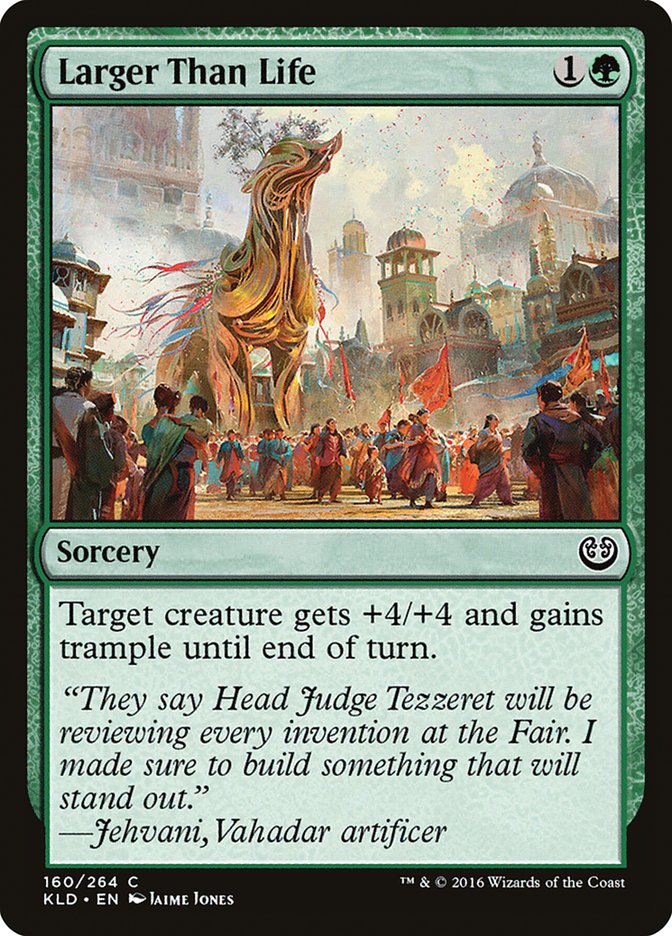 With the help of some friends and testing, we came to the following conclusion: Shipwreck Moray must be prioritized as the U/G drafter. You see, the Eel is a fine card, but I never prioritized it and hence often didn’t end up with the card early in the format. With cards like Scrounging Bandar, Highspire Infusion, and even Larger Than Life, the Moray can attack for unreasonable amounts of damage. I began drafting U/G beatdown decks that didn’t focus on energy but had it as a sub-theme. Going into Pack 3, I always had two copies of Shipwreck Moray and some blue fliers like Hinterland Drake and Skyship Plunderer. This made Larger Than Life more enticing than I expected and I have won many games off the back of the card whether stealing a game with Shipwreck Moray or pushing in the last couple points of damage.

The main lesson we learned is that U/G wants to curve out with creatures and attack (get in there with that 4/7 Thriving Turtle!). Use combat tricks to push through damage. Play a tempo game with cards like Leave in the Dust. Don’t be afraid to save your energy from Aether Swooper to power up your Aetherstream Leopard. This was unintuitive, especially because U/G was a durdle-fest in Kaladesh Limited. Now I have it as one of the top archetypes and, although it’s not a large sample size, I am 12-0 with my U/G decks since I have been drafting it in this manner.

Okay, enough of that, let’s get into the pack. I’m going to skip Pack 1 Pick 1 today because many of you have vocalized a higher interest in picks later in the pack. Hopefully you don’t miss it too much.

As you can tell, the first couple packs have been absolutely abysmal. Yes, I got to first-pick Tezzeret the Schemer, but having to take Universal Solvent and Cruel Finality, two cards that are very low-impact, so early was unfortunate. They were some of the worst packs I have seen with the majority of cards in the nearly unplayable camp. Enough of the rant, though. I was pleased to see the following pack:

Ah, good old Shielded Aether Thief. As a teammate of mine, Abe Corrigan, would say: it’s a split card between Moat and Phyrexian Arena!

Okay, Abe, settle down, it’s not that good.

But Shielded Aether Thief certainly can be a potent magic card. You feel like you’re getting away with something once you draw your second card off it, and that’s not that hard to do (although it isn’t that easy either). Given that I already have Tezzeret the Schemer, a good blocker is definitely something that I am interested in. There are two downsides I see here. First, taking Shielded Aether Thief is either throwing away Cruel Finality or a hard commitment to U/B (this is a super-minor downside and would only influence my pick if it was nearly 50-50). Second, black has such little synergy with energy that Shielded Aether Thief won’t be drawing the second card as often as I would like. This is the big hit that brings the card down quite a bit in my eyes. So what is our other option?

Aether Poisoner keeps going up in my pick order. I have it as the best black common; yes, better than Daring Demolition. It’s a defensive two-drop, which is exactly what my deck is looking for, but also doesn’t really help sway either way since Shielded Aether Thief fits that description as well. The important fact is the artifact synergies. With Tezzeret in my pool, I really want to maximize the -2 ability. I want to be able to cast Tezzeret the Schemer and kill a creature two turns in a row while also having blockers to protect it. Aether Poisoner is the perfect card for that. Even more so, having two-drops that double as artifacts increases the potency of cards like Bastion Inventor and Fen Hauler, both cards I am certainly looking to pick up if I end up in U/B. And to add another subtle plus, the card is black and I could feasibly play any other color and splash Tezzeret.

This pick is extremely close in my eyes, but the key is understanding the importance of artifacts specifically in the U/B color combination. Even though I am not fully committed to Dimir at this point, I think Aether Poisoner is less replaceable than Shielded Aether Thief for that archetype. Because of that (and everything mentioned above of course), I am taking Aether Poisoner here. But I wouldn’t fault anyone for taking Shielded Aether Thief.

Thank God that Pack 2 is not going as poorly as Pack 1. I don’t think I was in the wrong lane; I just think Pack 1 was comically weak. So the last four picks have gone swimmingly! It’s important to note here that I am probably U/B, but with my main color as black and an Implement of Ferocity, I could potentially be enticed by a very powerful green card like Winding Constrictor or Ridgescale Tusker, especially since splashing Tezzeret the Schemer is much easier in green.

I have not been impressed with Barricade Breaker. Even though a 7/5 is very good in this format, the decks that can power it out best tend not to be aggressive. Also, the common “aether cycle” completely nullifies the card by making a chump blocker every turn. If I’m going to take a card for my top-end, it’s going to be Bastion Inventor. So is it the hexproof threat or Aether Poisoner?

This pick is painfully difficult in my eyes. As Pack 1 was extremely weak, my deck is lacking in multiple areas, both of which happen to be two-drops and top-end. To put it this way, if I had an Aether Swooper I would definitely take Bastion Inventor, and if I had something like a Wind-Kin Raiders, I would certainly take the Aether Poisoner. But as is I only have a Fen Hauler (yes, I’m ignoring the Foundry Assembler as I would like to avoid playing it) and an Aether Poisoner. When in a situation in Pack 2 where your deck needs both cards, it’s important to ask yourself the following question: “Which type of card is harder to come by in the rest of this draft?”

It’s easy to misevaluate the answer to this question, since obviously it’s harder to come by improvise top-end because there aren’t any in Pack 3. Although Bastion Inventor is some of the best top-end for a deck like this, cards like Self-Assembler and Ambitious Aetherborn will suffice. And Gearseeker Serpent would obviously be amazing. Two-drops aren’t that hard to come by either, though. Aether Theorist and Dhund Operative would both be great in this deck. So we have to go even deeper.

The first thing to notice is that Aether Poisoner is the absolute best two-drop for this deck. And it is not irrelevant that it increases the density of artifacts prior to turn 3, which is very important for Tezzeret’s Touch. Bastion Inventor, on the other hand, is not the best of the best regarding top-end. Gearseeker Serpent gives Bastion Inventor a run for its money, and plenty of rares surpass the card by a substantial margin. The other observation, which you should be familiar with by now, is that an abundance of two-drops is not a problem, while too much top-end is. Your curve is extremely important in this format because aggressive decks are common, so in situations like this, I almost always lean towards the cheaper card.

After a full dissection of my options, I have decided to take the Aether Poisoner here. And even though I didn’t end up with as much improvise/artifact payoff as I would have liked by the end of the draft, I was extremely happy to have that second copy of Aether Poisoner.