It doesn’t matter how much you look at historical data, plan, or hope; we couldn’t have randomly guessed that December 9th, 2018 would be the city of Roanoke’s snowiest December day ever. It started in the morning, and the decision was made to close the Berglund Center to the public. We would make safe trips to collect essential staff and sixteen other people – our Invitational and $10K Cube Draft Top 8. The Invitational was up first as planned, but we were in the midst of fifteen inches of snow falling around a city that was ill-equipped to handle it. That left the $10K Cube Draft waiting in the wings.

I had been patient for months and was ready to show the world my favorite format on the biggest stage. Countless hours testing, tweaking and planning everything about the Cube itself, how the broadcast would go, how we would present something so awesome to such a large audience. But in the interest of safety, I made one of my saddest calls in my time at Star City Games – do the draft and games in an empty convention center, try to record as much as we could for later, and get everyone out while roads were safe. The only ones able to watch the whole draft and each match in its full glory were two people, Head Judge Eric Dustin Brown and myself. Everyone got to see one Players’ draft and the finals. Not exactly what I wanted.

And not what we’ll be getting at 2019’s SCG CON Winter event.

I decided that day that it would absolutely not be the end of the road for including Cube in a major way at our flagship event. I love this format too much and have invested too much of my heart and soul into this to let it stop now. Everyone has to experience the joy of Cube drafting.

So today marks the true start of the road to SCG CON’s next iteration of the $10K Cube Draft, and we’re bringing everyone along for the ride. More on that later.

Last year I talked to dozens of players at the event about Cube, and even more on social media. Everyone loved the idea of a high-stakes Cube draft. However, there was one complaint that I heard over and over again: Why can’t I Cube to qualify for the final draft?

I’ll admit, I didn’t have an answer last year. But you’d better believe that I was back in the lab the next week, determined to figure it out.

This year at SCG CON Winter, we’ll be having eight qualifiers for eight slots in the $10K Cube Draft again, just like last year. But the difference this year is five of those qualifiers will be Cube Draft, with the remaining three being Modern. I want to be straight up with everyone – no one is going to be drafting the SCG CON 360-card powered Cube to qualify for Sunday’s $10K Cube Draft. As much as I would love for it to happen, the logistics are impossible. But that didn’t leave us optionless.

The Players’ Cube will be drafted in each of those five qualifiers. It’ll be a 360-card Cube that’s primarily commons, traditionally known as a Pauper Cube. Creating a Pauper Cube was the best way for us to allow players to be able to be able to experience real-life, competitive Cube drafts from the first round of a Qualifier all the way up to their finals match with a Powered Cube. Each Players’ Cube Qualifier will be capped at 64 players, and will begin with eight pods of 8, each drafting a copy of the Players’ Cube. Once drafts and deckbuilding are complete, all 64 players will play four rounds of Swiss, with a cut to Top 8. In the Top 8, those players will draft another copy of the Players’ Cube for additional prizes and a coveted slot into Sunday afternoon’s $10K Cube Draft. In all drafts with the Players’ Cube, participants will keep what they draft.

And when the Players’ Cube is finished, I have no question that it will be awesome.

This is where you come in.

As we announced on the SCG Richmond broadcast over the last weekend, the community will vote on the remaining slots for the Players’ Cube. I put together the base of 250 cards that help lay the groundwork for archetypes, general curve, and Cube identity. Each of the 110 remaining slots will be voted on by the community. Each day, we’ll be posting on our official social media channels two slots to vote on. Each vote will consist of three cards (I’ve been calling them “buckets”) that are somewhat similar to each other, but with key differences that help shape the Cube. I’ve designed the buckets so all the cards being voted on are the same color, so if you’re reading this and are concerned that all the white cards might be voted out, worry not! You should still make plans to bring your favorite Plains to SCG CON Winter.

It’s time to vote! This round, choose which of these Blue Regrow Instant/Sorcery Creatures YOU would like added to the #SCGCON Winter Players’ Cube! See each card in the thread.

Each bucket will be voted on for half a day, at which point that voting period will end and a new bucket will be voted on. Voting started on August 19 and will continue on until the afternoon of Friday, October 11th. All the cards that are selected from each bucket will officially make it into the 360-card Players’ Cube to be used at SCG CON Winter. You can see all the cards that are currently in the Players’ Cube here. I’m excited to see what the final product will look like!

I can’t take credit for this myself. While I came up with the Pauper Cube idea, Assistant Manager of Brand Jenna Juilfs helped bring this to the next level with the community involvement.

So now that we’ve gotten the community involvement of the Cube out of the way, let’s talk about some of the specifics of the Players’ Cube in general.

To create the baseline list for the Players’ Cube as well as the buckets, I had to come up with 580 unique cards. Once the voting is completed, the 360-card Cube will consist of 50 cards of each color, five cards of each two-color combination, 25 colorless cards, and 35 lands. This configuration won’t change based on the voting. The 250 base cards that I’ve pre-selected are either some of the more powerful cards to help lead decks in a draft, or cards that can fit into multiple archetypes. The bucket cards flesh out the archetypes or are unique effects that are being purposefully limited due to the nature of how the final list is derived.

Since we wanted everyone to be able to keep what they drafted and keep the costs of the Qualifiers reasonable while still providing prizes outside of the Top 8, we opted to go with commons only. Well, with a few exceptions. There are a few cards that have never been printed at common in a paper printing but are staples to the Pauper format online and commonly included in Pauper Cubes, like Battle Screech and Chainer’s Edict. It was important for me to include these exceptions, because they evoke the feel of the format. 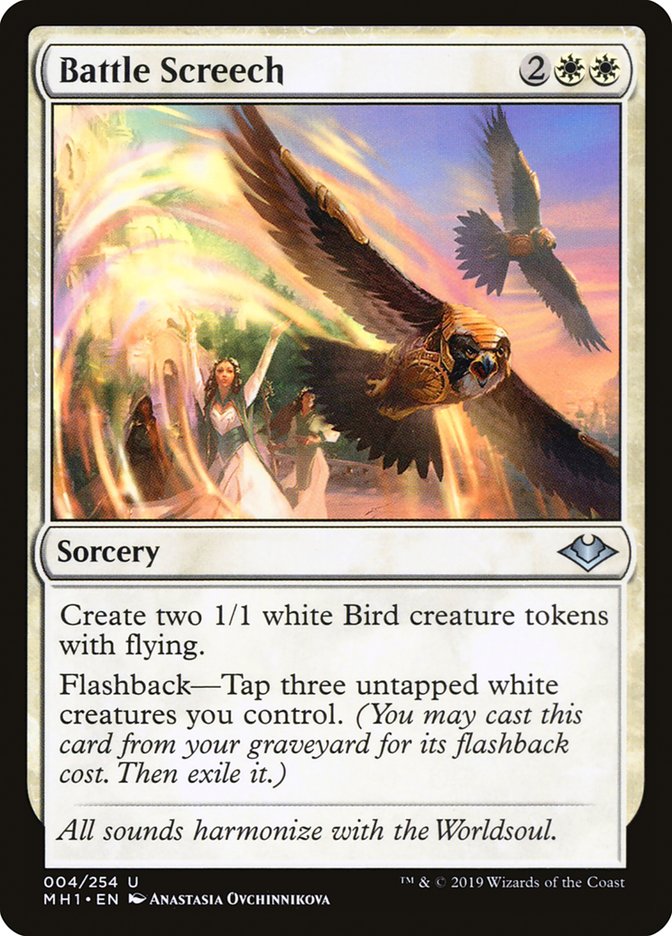 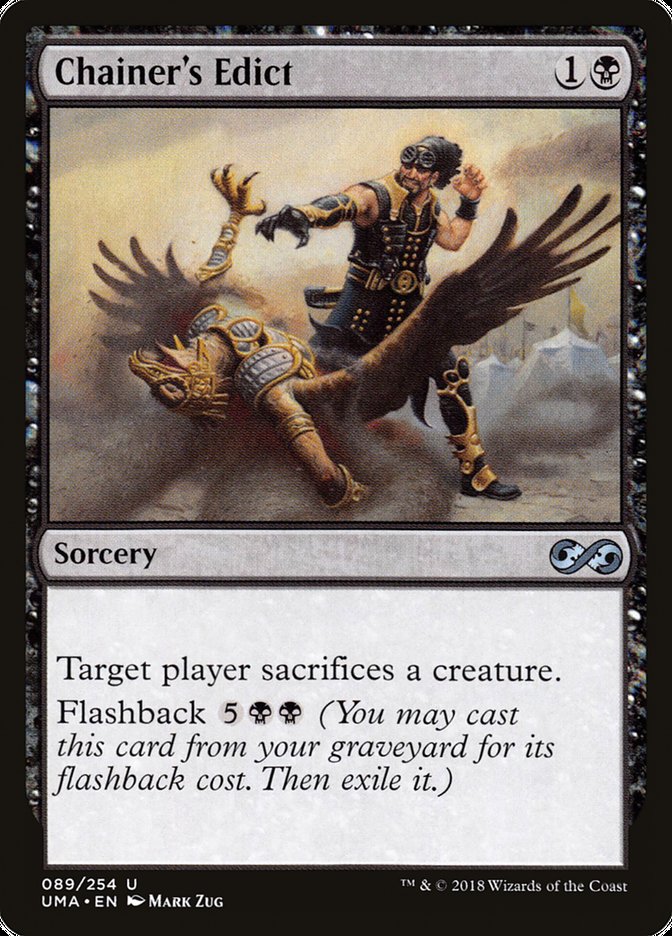 Now on the other hand, there are some cards that I’ve excluded that you might expect to see. In the vast majority of these cases, it’s because we didn’t/don’t have the number of cards available to us to make it into each copy of the Cube. Things like Preordain, Searing Blaze, and Ash Barrens aren’t in the Cube because we just don’t have enough, and going out of our way to get more would increase the cost of the Cube events, which we definitely didn’t want to do. So these cards are absent. I truly did my best to create the best possible list and buckets that I could, given the constraints of what we’re creating. I apologize if there’s a card missing that you expected to see, but I can promise there is a reason.

I see you questioning my math. Why would they need so many copies of cards if there are only going to be 45 versions of the Players’ Cube used during Qualifier events? That’s because we’re also going to be offering On-Demand, eight-person Players’ Cube drafts throughout the entire SCG CON Winter weekend. Did the Qualifier cap but you still want to Cube? Jump into an On-Demand. Want to get some reps in before playing in a Qualifier the next day? Jump into an On-Demand. Like I said, I want everyone to be able to experience Cube at this event.

Even though SCG CON Winter is nearly three months away, it will be here before you know it. If you’re reading this article around the day it was released, there will be over 100 more buckets to vote to shape the final version of the Cube. Make you voice heard on social media! Convince others of your picks! Use some light blackmail (not too much, though). This is the Players’ Cube for a reason.

If anyone has any further questions about the Players’ Cube, I’ll be happy to answer them on Twitter, directly at my handle @JParnell1. I’m sure the @StarCityGames account can direct you to me as well. I’m excited to see what everyone picks!

If you have questions about the Powered Cube we’ll be using for the $10K Cube Draft on Sunday of SCG CON Winter, I’ll be back in early November to give everyone the rundown on that Cube. I’m largely going to hold off on talking about that one publicly until it’s finished, but like last year, once that article goes live, I’m more than happy to chat about it. For now, all focus will be on the Players’ Cube.

Thanks for reading, everyone. If you want to hear me talk about Cube more, I’ll be focusing on the format in an episode of my podcast next week, which you can findon a variety of platforms.