Welcome to What We’d Play! With another SCG Tour Championship Qualifier taking place this weekend, many are unsure what they’d play in Core Set 2021 Standard. That’s where we come in and let you know what we’d play and why we’d play it. Hopefully this advice aids in your decision making for the event! Be sure to vote for what deck you would play at the end!

Alexander Gordon-Brown didn’t just win Saturday’s SCG Tour Online qualifier. He dominated it. For a few weeks now I’ve been hooting and hollering about how every Sultai Ramp deck felt like it was being built wrong. A host of spells reacting to battlefields ignored the painful reality that most cards in Sultai Ramp didn’t even need to remain on the battlefield to make an impact.

Alexander Gordon-Brown finally adapted and added a host of ways to interact on the stack such as Negate, Mystical Dispute, Disdainful Stroke, and a full four Aether Gust. He added flash threats in Brazen Borrower and Shark Typhoon that allowed him to hold open mana without falling behind while pressuring the Narset, Parter of Veils that were the prevailing mirror tech heading into this weekend. And he appropriately accounted for a weak maindeck configuration against aggressive decks by absolutely stacking the odds with ten removal spells in sideboard games.

This was world-class deckbuilding and Alexander was appropriately rewarded with a victory. I’m riding on his coattails until everyone else catches up.

At this point, Sultai Ramp has clearly established itself as the deck to beat in this new Core Set 2021 Standard format, even though no one can agree on the specifics of the list. I, on the other hand, am not totally ready to accept that Sultai Ramp is the new Temur Reclamation. It may very well end up being the best deck when all is said and done, but I think it’s still too early in the format to declare it solved, so I’ve been trying a variety of different decks.

Right now, I’ve been enjoying Temur Elementals a lot. It has its shortcomings, as do all Ramp decks, but Genesis Ultimatum feels like Wilderness Reclamation + Explosion in one card — if you cast it, you almost always win the game, and, unlike Explosion, it doesn’t actually care what the battlefield looks like. This means the deck is very powerful versus midrange strategies and can battle discard pretty well, as you have certain cards that just win the game outright in topdeck wars. You can’t play a lot of interaction like Temur Reclamation could, since Genesis Ultimatum and cards like Risen Reef have some deckbuilding constraints, but you still get that “go over the top of everyone” that you had with Temur Reclamation, and some of the best cards against you (Mystical Dispute and Elspeth Conquers Death to name a few) are seeing play in lower numbers than they were before, so I like where the deck is at right now.

I was originally playing a 60-card version of the deck, but I’ve since morphed to the 80-card version from Jean-Emmanuel Depraz, with a small number of changes (mostly in the mana-base — I think his list had too many Forests and not enough Castle Vantress). I think having an extra card is strong against the Sultai Ramp decks, and now that most Sultai Ramp builds seem to gravitate towards playing a lot of copies of Nissa, Who Shakes the World, I definitely want to play Aether Gust.

Tired of losing to Sultai Ramp? I wouldn’t know what that feels like because it never happens to me. I just keep kicking their teeth down their throat because they aren’t well equipped to beat an aggro deck that curves out with cheap yet oversized threats that have relevant text. So stop playing bad aggro decks — you can’t play Rotting Regisaur or rely on Embercleave when black-based removal is ubiquitous — and start playing the only good one that also beats the crap out of everything else.

Seriously, I stopped keeping track of how often I beat Sultai Ramp on my way to #3 on the Constructed Ladder on MTG Arena because what’s the point of keeping track of something when the result never changes? Be as skeptical as you want but I’ve lost less than double digit matches over the past week and I’ve streamed it for everyone to see just to keep the haters quiet for a day or two.

Even though things did not go well for me last weekend, this list is truly a Sultai Ramp killer.  I was the first-round feature, did my thing against the best deck in the format Game 1, and tossed the match away with a Frantic Inventory fired at an enemy Narset, Parter of Veils.  Outside of that mistake, this Azorius Control deck has been putting up the big numbers with relative ease.  Before the banning of Wilderness Reclamation, when the format was even more hostile toward slower decks, I was able to cruise to an easy mythic rank on MTG Arena with a similar strategy.

Things have gotten better for the format, but Azorius Control took a big hit with the loss of Teferi, Time Raveler.  Luckily for us, the other bannings hurt our enemies worse and this list can put up the big numbers once again.  With maindeck Aether Gust everywhere and a target on green in general, Azorius Control flies in under the removal radar and has an easy time taking the first game.  With a little sideboarded finesse, this deck is advantaged over Sultai Ramp, as well as strong against the aggro decks of the format.  Although there had to be maindeck concessions to creatures in favor of more Dovin’s Veto, Azorius Control is centered around Shatter the Sky, which gives us the hope we need against early aggression.

If you want to succeed this week, you either need to be making special adjustments to your Nissa strategies, as we saw this past weekend, or be attacking people.

Generally, I prefer attacking folks.  Gruul Aggro has always been a relatively underrated strategy and I certainly respect those that prefer to play monocolor aggro because having to play four Temples in these types of decks (especially Izzet) stinks, but there’s really one card in this strategy that puts it over the top in my eyes 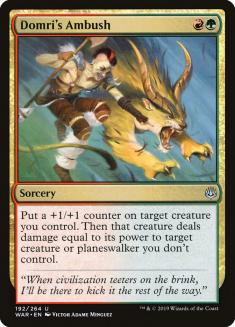 I want to kill Nissa, no matter what.  Domri’s Ambush + Lovestruck Beast can cleanly accomplish this in a naturally aggressive shell and from there you can see all the pieces fall into place.

Sure, It’s tough to dodge and/or mitigate Aether Gust, but Garruk’s Harbinger is extremely strong in Core Set 2021 Standard right now for its ability to dodge all the Heartless Acts and Eliminates floating around.  This deck has unique strengths in being able to present engine pieces in similar speed matchups while not sacrificing much in terms of raw goldfishing power where necessary.

Generating card advantage, having resiliency, and killing your opponents is where you want to be when a subsection of the “best deck” metagame is getting inbred to try to kill each other.

Alexander Gordon-Brown just broke it, and all I’ve done is turn things around further towards the mirror. Sideboard Thought Distortion is the next level to everyone moving harder towards counterspells, and Disdainful Stroke is just worse than another Negate.