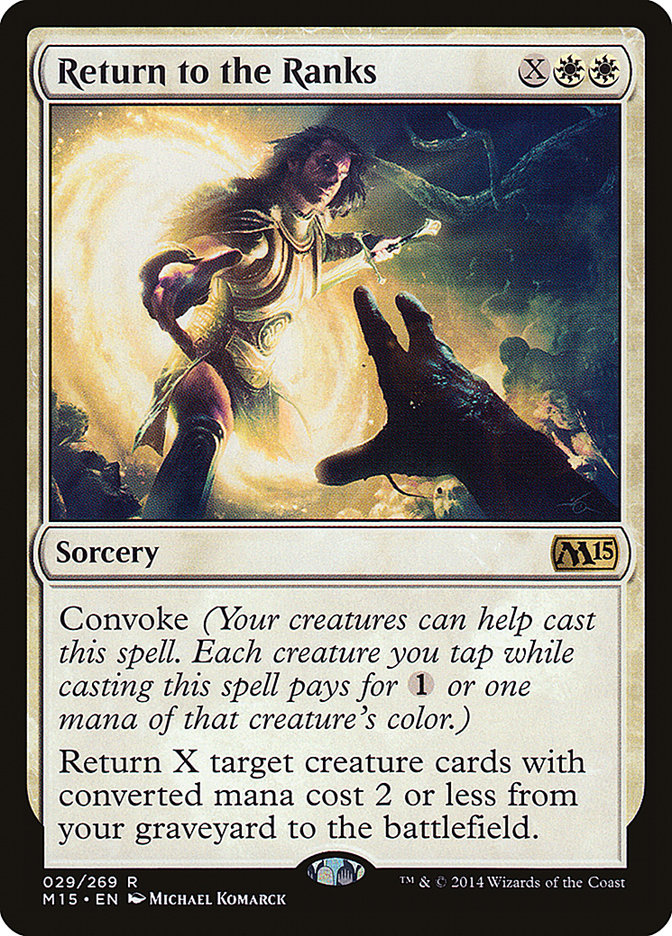 There are a lot of different shells for the card that I want to look at.  First, the most obvious card to work with it is Satyr Wayfinder since it itself is a two-mana creature that also helps power it, so let’s start there.

I probably don’t need to explain Thoughtseize.  There aren’t a lot of things that are especially appealing to do with one mana here since Elvish Mystic is pretty bad at casting my spells and I’m not ramping to anything, since I just want to play a two-mana spell on turn 2 every time.  I could play Soldier of the Pantheon, but it seems pretty weak.  Sunblade Elf has good stats.  I’m only playing eight Plains, so I won’t always have one, but Satyr Wayfinder helps a bit.  More importantly, when I Return to the Ranks I plan to suddenly have a lot of creatures, and that makes Sunblade Elf’s ability very powerful.

The two mana creatures all have specific synergies with Return to the Ranks.  Cartel Aristocrat lets you put creatures in your graveyard to get them back with Return to the Ranks.  In general, that’s not terribly productive, but if you have a creature with an ability that triggers when it enters the battlefield or when it dies, this lets you trigger it again.  In this case, the creature that you’re taking advantage of is Voice of Resurgence, which is great, because the payoff is a creature that likes that you’ve put several creatures into play at the same time.

Satyr Wayfinder is obvious; it mills you which puts creatures in your graveyard that you can get back.  Lotleth Troll and Pack Rat also put creatures into your graveyard, but they came from your hand.  That’s a little worse, but Lotleth Troll can kind of act as a mana source to let you get creatures into play faster than you could by casting them by discarding them and then returning them, and you get counters as an added bonus.  Pack Rat goes the other way, it isn’t saving you mana, but it’s letting all your creatures serve double duty.  First, they become rats, then they come back to life.  Also, returning multiple Pack Rats is nice, in that having multiple Pack Rats in place is nice.

Brimaz, King of Oreskos is just a powerful card that we can cast that’s good at convoking.  Ephemeral Shields is mostly just a card I’m excited to try out.  I’ve always loved Gods Willing, and being able to tap all your mana and still hold it up is great.  I think it’s at its best when it’s protecting Brimaz (or maybe something even bigger like Dawnbreak Charioteers or Archangel of Thune).

Hero’s Downfall is there because we just need removal, that’s how this format is.

Golgari Charm out of the sideboard is there largely to stop Supreme Verdict.  It’s nice to get all your guys back after they kill them, but not that great if they just kill them all again.  It’s pretty expensive, but eventually you might be able to set up Returned to the Ranks with Goglari Charm up, and that’s probably pretty good.

Back to Nature is just an extremely powerful card given the number of enchantments in Standard, and since this deck isn’t playing any, playing it seems pretty automatic.

Lifebane Zombie gives you access to the full package of Thoughtseize, Pack Rat, Hero’s Downfall, and Lifebane Zombie that Mono Black Devotion has been terrorizing Standard with, and Sin Collector does a similar job against control.

So that’s the first option.  The issue is, I’m not really sure that we need to work that hard to make Return to the Ranks good.  Maybe instead of focusing on getting creatures into my graveyard, I should trust that my opponent is going to do that for me, and instead, I should just focus on playing creatures that will be good if I have a lot of them in play.

One kind of creature that’s really good to have in play in large numbers is Slivers.

As sweet as Sliver Hivelord is, I’m a little worried that in practice, the opponent will just consistently kill Manaweft Sliver and it’ll be very hard to cast.  My solution here is to have it in the sideboard against people who I think will let my Manaweft Sliver live.

Instead, I’m just playing all the cheapest slivers, and trying to make combat miserable for my opponent with First Strike + Deathtouch with optional Flying and Vigilance.  Leeching Sliver is a way to create a fast clock, especially if you can get multiples in play.  Diffusion Sliver is extremely important for protecting your Slivers as much as possible, and Sentinel Sliver makes Returned to the Ranks a lot easier to cast just because it’s white.

The sideboard offers the Venom Sliver + Thorncaster Sliver combo to kill (presumably) all of your opponent’s creatures.  Chord of Calling will be good against anyone who doesn’t have a ton of removal, especially for creating the first strike + deathtouch combo in combat.  Devouring Light offers a little more interaction at a great price if you have Sentinel Sliver, and Back to Nature is included for the same reason as the first deck–I don’t have enchantments and without it, Detention Sphere and similar effects are a great way to permanently deal with my creatures, but they become a liability if I can kill them all at once.

It’s possible that the more natural way to build Slivers is to have Chord of Calling main and Return to the Ranks in the sideboard, but I think most opponents will actually be trying to kill the slivers, and if they’re not, I think we’ll be in good shape, so I think I’d rather start with the card that hedges against interaction.

If tribal synergies are the right way to exploit Return to the Ranks, Slivers isn’t the only tribe that can use it well.  Another option is B/W Humans.

Another nice little synergy is the interaction between Pain Seer and convoke.  It may not come up all that often with Return to the Ranks, but after sideboarding Pain Seer + Ephemeral Shields is pretty cute.

Dawnbreaker Charioteers is an unusual choice, but it’s a human and protecting it with Ephemeral Shields is really interesting since you can play and protect it on turn 4, and you get a heroic trigger when you protect it if they try to kill it.  Four is still a lot of mana, but it might just be good enough against aggressive decks.

Return to the Ranks could also fit in R/W deck with the goal of setting up battalion:

I’ve gone in some weird directions with this one.  First of all, I’m really interested in not letting creatures block.  I have Frenzied Goblin, Legion Loyalist, Imposing Sovereign, and Firefist Striker.  If that’s not enough, I even have a couple of Hammerhands in the sideboard (this is highly speculative, but it does shut down a blocker and the haste can let you get an unexpected battalion).  Things are going pretty poorly if my opponent can ever block.

Raise the Alarm has an interesting bit of tension with Return to the Ranks.  On the one hand, it’s great because Raise the Alarm is always good for convoking, but on the other hand, it occupies a two mana creature slot but you can never return it.  In this deck, I don’t think that’s an issue, because I think you’ll always have plenty of targets in your graveyard once you have enough mana to make it powerful, so I like Raise the Alarm here even though I didn’t use it in other places.

So my creatures are pretty tiny, but I have a lot of them, and I think they’re likely to get through.  How do I take advantage of this? I don’t know, but maybe Five-Alarm Fire is good here.  I mean, if it’s ever good, it’s going to be good here, right?

Even if my opponent can block and kill my guys in combat, I can suicide them and then Return to the Ranks to get them back, ideally using some Raise the Alarm tokens to help.

Hammer of Purphoros is great with Return to the Ranks, since it doesn’t put them into play tapped or anything, I can suddenly have a huge force attacking my opponent.

In the sideboard I can prepare to grind if I have to with Spirit Bonds and Purphoros, God of the Forge, or I can use Boros Charm against sweepers, or Act of Treason, Hammerhand, and Frontline Medic to punish attempts to block against me.

The last option I’ve considered is likely the least fancy, but that might be a good thing, and that’s Mono White:

I liked the idea of Mono-White Devotion with Return to the Ranks, since you suddenly have a high devotion count when you resolve Return to the Ranks, but there isn’t really any payoff outside of Nykthos, Shrine to Nyx.  I’ve dealt with this by putting Nykthos and big spells to cast with it in my sideboard for matchups where I need to go big, and keeping a maindeck that can support it even though I’m not using it.

Vanguard of Brimaz isn’t great, but it works well with the sideboard devotion plan and works well with Ephemeral Shields which I’m trying to incorporate in a more serious way in this deck.

Between Vanguard, Precinct Captain, and Brimaz, King of Oreskos, this deck can make quite a few tokens which obviously make Spear of Heliod and Hall of Triumph great, but also support Boros Elite and Return to the Ranks.  Remember that a very real portion of the time that you want to cast Return to the Ranks, it won’t be because of a sweeper.  Some of your creatures will have died to removal and died in combat, and the extra creature tokens you’ve made will be an important mana source for returning them.

Just how good Return to the Ranks is when you’re not actively putting your own creatures in your graveyard remains to be seen.  It should be good against a deck like Mono-Black Devotion (though much worse if they’re on a Pack Rat draw), but very bad against something like Mono-Blue Devotion, that never kills your creatures.  I think there’s more black than blue, but it still may only be a sideboard card at best, unless something more dedicated like the first deck here, pans out.