What’s up everyone? This is Tsumura Kenji and it is my pleasure to debut as a writer for StarCityGames.com. I haven’t written too many articles in the past, but hopefully this will turn out okay. It would be great if you could follow me through the entire article.

Today, I would like to discuss the Glare of Subdual deck that the Japanese players played for Worlds. The beauty of this deck is that the power level of each card in the deck is very, strong so it has a decent matchup against almost every deck in the format. However, like the old Fires of Yavimaya decks, if you don’t draw your mana acceleration cards (Llanowar Elves, Wood Elves), there’s a good chance that you won’t be able to utilize your hand and end up losing. Therefore mulliganing can get a little tricky for this deck sometimes.

Here is the decklist that I used at Worlds.

I would like to explain some of the card choices that weren’t four-of’s, as I feel most of the four-of cards are pretty obvious.

A lot of people might wonder why there aren’t four Llanowar Elves, but surprisingly, this deck has a lot of W casting cost cards. Especially after sideboard, there’s Hokori, Dusk Drinker and Yosei, the Morning Star, giving you heavy White requirements. You want to make sure you can cast Hokori and Yosei when given the opportunity, rather then not being able to cast it because of mana issues, so the Bird helps out. On the other hand, only one of those creatures does anything by itself with a Jitte. If there’s a concern with the mana base, it’s alright to switch to two Elves and two Birds as well.

We had three Arashi’s in the main because the Boros weenie deck we tested against had a lot of fliers and the single hardest card for this deck to deal with is Meloku. Besides, at worst Arashi is a five-mana 5/5, so even if you play it from your hand, it’s still a versatile fatty that your opponent will have to deal with. As for the White dragon, I believe Yosei is the strongest creature in the current format. Therefore if you were to play in a Standard tournament it might be better switching to two Arashi and three Yosei in the main.

Until the very end of tweaking and testing, there were four Jittes in the main, but Jittes were cut down to three to fit in some Seed Sparks. Seed Spark has great synergy with Glare of Subdual and – depending on when you play it – it can straight up win you some games. Once you play it you can see, but Seed Spark is a much stronger card then it looks.


Next is the explanation of the sideboard. 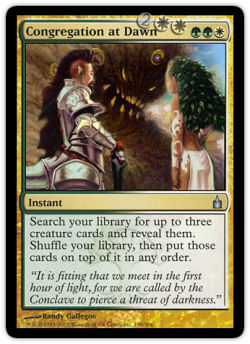 This is widely known as the card that destroys control decks. Because of Congregation at Dawn, it looks like you only need one or two copies but if you consider Congregation at Dawn as one copy, it ends up costing seven mana most of the time, which isn’t particularly efficient. Many games are decided based on the timing of when you cast this card, so I’m confident that there should be at least three copies in the board.

This card will be pretty strong when you play it against a deck with Yoseis, assuming both players aren’t locked down anyway. The card also has great synergy with a lot of the cards in the deck like the Selesnya Guildmage, Vitu-Ghazi, the City Tree, and Glare of Subdual. In the mirror match, just casting this card gives you a significant advantage, so depending on the metagame, you could consider including this card in the maindeck.

In the mirror match, whoever gets mana acceleration first will win. Therefore, I wanted to include two in the sideboard, but because of the amount of slots available it ended up being one. Drawing too many mana sources can be bad as well, so I feel one will be fine.

This card is a strong enchantment that is in my opinion, the best or the second best enchantment in the current format. The combo of this card and Yosei is going to be GG right there. You generally side it in against control decks to give you more problematic spells that they must deal with or die.


Now, the explanation of the matchups against some of the top decks in the format.

The only factor in this matchup is whether or not you can survive the early pressure. Game one might be a littler unfavorable but if the opponent has even a slightly slow start, it should be easy to win. If you draw Guildmage early on, make sure to block aggressively with it and don’t try to save it for the late game.


It might look weird to side out Glare of Subdual, but recently many decklists include Kami of Ancient Law and the most important cards in this matchup are the burn (Lightning Helix, Char) and not the creatures.

You can deal with flying creatures with Arashi, so even if you take out Glare of Subdual, it shouldn’t be a problem to deal with opposing creatures.

The matchup is much different depending on whether or not they play White cards. If they don’t have White, you generally name Kagemaro, First to Suffer with Pithing Needle and if they are playing White, I think it’s best to name Sensei’s Divining Top with Needle.


If they’re playing White, you can also side in Naturalizes. Because of Hokori and Yosei, the matchup becomes much more favorable for you after sideboarding.

The matchup is a little worse against the Dark Confidant version that the Netherlands group played compared to the regular decklists that include Azami, Lady of Scrolls/Tidings. However I still believe things are favorable against both versions of the deck.

(Against the Dark Confidant Version)

Depending on the strength of your hand, playing changes significantly, but the general strategy is to constantly keep casting spells. It might be fine to include Naturalizes if the opponent has a large amount of Plague Boilers and Pithing Needles in their deck.


This is generally how all the Japanese players sideboarded, but it might be correct to keep the Glares in post board, especially if you think your opponent won’t expect it.

I guess that’s about it. It would be great if this article was of any help to you guys, and please give me feedback as to what you thought in the forums. Well then, see you in the next article or the next tournament!